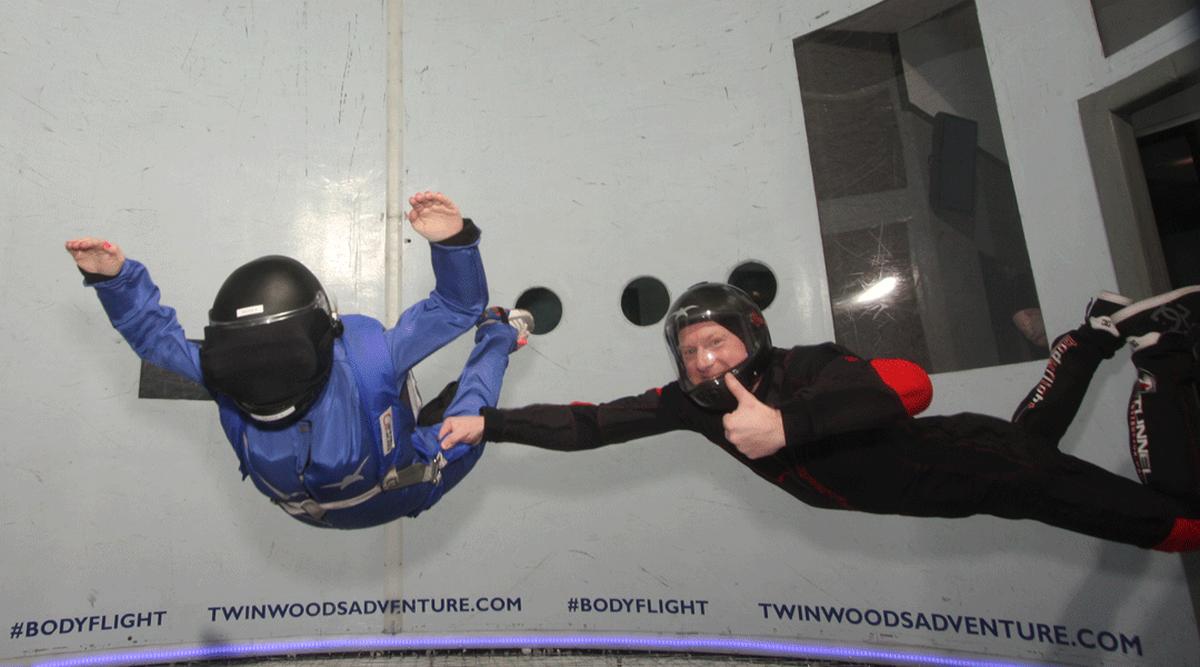 Have you ever wanted to go skydiving, but the fear of a failed parachute and getting splattered on the ground keeps you out of the plane and firmly grounded? A new VR experience is offering the exhilaration of a jump, without the chute, and it's all indoors.

Tunnel Vision launched at Virgin Experience Days in Bedford, England, putting jumpers into a flight suit and a 4K, 360-degree FoV Gear VR headset before letting them jump into an indoor wind tunnel. The wireless headset uses a special Tunnel Vision app that is maintained and updated remotely, and synced with the jumper's actions and motions. They are accompanied by a guide since users are really flying blind. The guide is in contact with the jumper at all times to help with spatial awareness.

According to the PR:

"Tunnel Vision recreates the skydiving environment of jumping out of an airplane with breathtaking views while in the safety of a wind tunnel by using virtual reality. Virtual reality allows people of all ages and risk adversities the chance to experience what it is like to jump out of an airplane while under a coach’s’ supervision in a wind tunnel, making it a safe environment that can be enjoyed year round. When a customer goes to a local wind tunnel they will now have the option to upgrade to the Tunnel Vision experience. The customer will then wear a specially designed full-faced helmet with an integrated virtual reality headset and can chose to virtually skydive anywhere in the world!”

The company also had to come up with a way to keep the VR headset firmly in place while battling the intense winds during the "jump". Tunnel Vision created a special head-mounted display that uses a ratchet-style tightening system to keep the goggles in place without any discomfort. The level of realism is apparently impressive, as even a member of the British Army's Red Devils Parachute Regiment gave it an enthusiastic thumbs up.

Right now, the experience is only available at the Bedford location and Airborne San Diego in California. Tunnel Vision is hoping to add more locations, but will focus on Europe first, co-founder Cody Russell told VR Scout. The plans are "to expand into eight tunnels within the next six to 12 months."

No word on how much the VR experience costs. The prices without VR run $60 for two minutes and $110 for four minutes of flight time, so you can probably expect to pay even more for the extra immersion.

Castlevania Advance Collection is out for Nintendo Switch today