Y'all know me, I love food. Most people love food though. I'd say just about everyone as a matter of fact. But still, I feel like I'm slightly above the average person when it comes to my foodie factor. And I happen to have grown up and still live in what I consider to be a glorious food Mecca, the San Francisco Bay Area. We've got a massive hodge-podge of cultures and cuisines to choose from. Sometimes, those very same things influence each other in such a way as to create a fusion of two or more cultures into a marriage of tastyness. 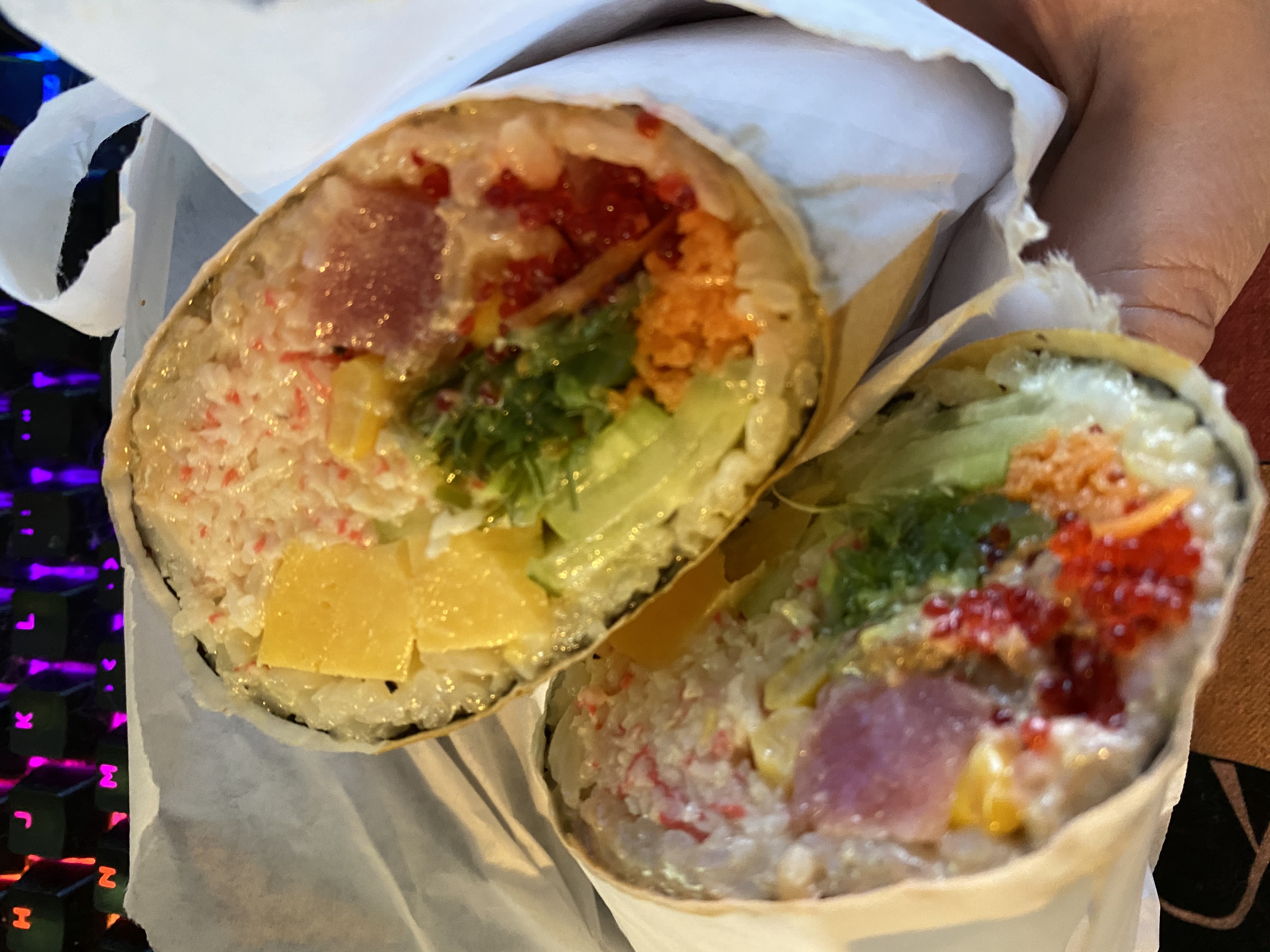 If there's two things we do right around here, it's burritos and sushi, and those happen to be two of the best kind of foods you can eat. So, you can imagine how pleased I was when I discovered a small hole-in-wall spot that served up sushi burritos several years ago. It also may be the very birthplace of the cuisine. Since then, I've seen a small number of similar spots show up here and there.

My personal favorite is Sushi Secrets out in Berkely because they let me choose my own ingredients to make what can only be described as a religious experience. The right combination of crab meat, raw tuna, sauces, walnuts, and veggies just tastes so damn good!

However, there is something that haunts the back of my mind when I grab one of these culinary fusion experiences. Am I really eating a sushi burrito, or is this just a giant sushi roll? And honestly, I'm not sure I have a good answer. Sushirittos as they're colloquially called certainly do resemble their carnes-asada-filled counterparts visually. They big, round, and full of deliciousness like a burrito is too. However, there's a few things that make it very similar to a sushi roll as well, like the fact everything is wrapped up in seaweed and open-ended like a sushi roll would be.

Some people will tell you flat-out that it is just a big roll, but those people tend to be no fun and somewhat boring in their attempts at being a pretentious asshat who won't let people have fun with things. Some folks just like hip fusion food trends and will scarf these badboys down after making sure their foodblog/Instagrams and seem just as snarky as the Sushiritto deniers. I'm honestly not sure if there's a right or wrong answer to the question or if that's even necessary. I mean, sometimes I want to eat a bunch of different sushi rolls and other times I just want one or two massive sushirittos stuffed to the brim with everything I would've gotten in those tiny rolls.

As you can see, perspective is everything here, people. But, I think no matter what side of the coin you find yourself on, it should really come down to just eating what sounds good and tasty to you and ignoring the haters. I think if you like sushi and burritos you probably owe it to yourself to try a sushiritto at some point in your existence.