Well, I did it. I managed to run three times a week for all of March. Not only that, but I increased how far I was running each of those days. This saw a significant increase in my overall distance, the duration I was running, and even sometimes an overall improvement of my time and pace. I gotta say, it feels pretty good to have set myself that goal, work towards it, and ultimately complete it in style.

For my final run of the month, I did a 10km run around a local track. It was just loops of a running track, which meant my elevation stayed the same and my pace could have stayed the same. I say could have because I didn’t maintain a steady pace, I actually tried sprint-jogs. Jog/run around the long sides and then sprint as fast as I could around the shorter sides. The end result was bursts of speed for the entire 10km stretch, with the long stretches of a slower pace to recover. 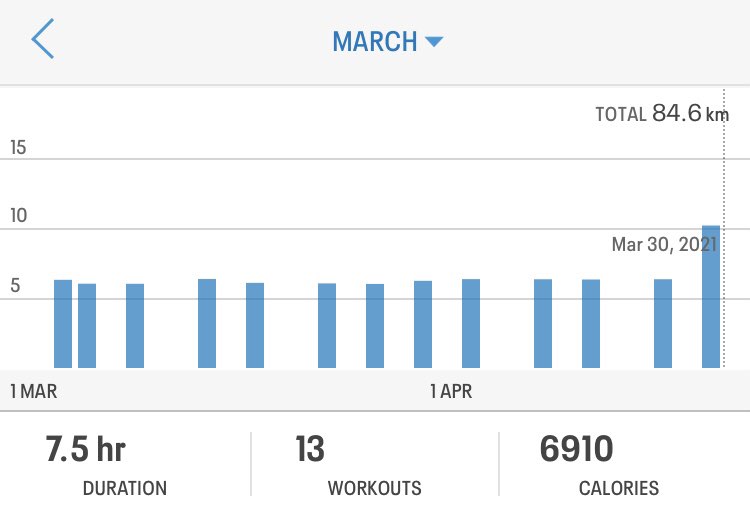 Unfortunately, it meant that I burned through a lot of energy, which ultimate meant my overall pace was slower than expected by the end of the run. I think next time, I’ll forgo the sprint-jogs and just focus on keeping my pace nice and steady. That can be tough in and of itself though, as I have no metric by which to ensure my speed stays consistent other than the voice in my ear telling me how far I’ve run, my average pace, and my split. I suppose that’s part of the challenge of running outside on a track instead of a treadmill: there’s no automation that keeps me locked at a set pace.

Moving forwards, I think I’d like to see if my mate is interested in running more with me. He’s come along once, and although he’s slower, we were still able to push each other to go faster. Plus, it’s far easier to run with someone else, as you’ve got another person to push you as you race around the track. Perhaps I could even find another friend who is of a similar speed to run with me. I think that will be a way in which I can actively improve my time, as it’s so difficult to do it alone while running outside. It’s so easy to feel tired and know you need to bank your energy for that hellish third kilometre.

But I digress. In terms of my final stats for March, you can see those above. I managed to hit 84.6km according to the tracking app, but I would often tack on an extra 100 metres after stopping the tracking in order to cooldown. I feel pretty confident in saying I hit the 85km mark. It’s good to know I’m only 15km short of getting that 100km goal in one month that I want to try and achieve.

Now, in terms of drawbacks, I will say that my knees took a beating from all those runs. My knees have never felt stiffer, with my left one having some pain at times. I’m fairly certain my form and running method is sound – landing on my toes not my heels – and my shoes are quite good, albeit getting worn. It could just be the impact of hitting the ground.

In the event I want to hit 100km in a single month, I think I’m going to opt for one short run and then one longer run. I feel it’s easier to hit longer distances on a running track than it is around the neighbourhood with its many turns, corners, street crossings, and other people taking up space.

All in all, though, March was pretty great. I gave myself a few days off from working out to let my body recover. But it’s properly into April now, so it’s time to dig back in, focus on my 5km twice a week, and hit those weights – they’re not going to lift themselves.