The first time I ever heard about Scud: The Disposable Assassin was in a magazine put out by Hero Illustrated that was all about indie comics and heroes. I must've been around 13 or 14 at the time and was mostly into it for things like Spawn and other Image characters of that era. Buried in between the images of roided-out bros with too many guns and way too many muscles was a blurb about a comic starring a robot hitman bought out of a vending machine who realizes he's going to explode if he kills his target. In order to stay alive he puts his mark Jeff, a crazy-ass monster who spouts movie quotes out of the mouths in its knees, into a coma and takes on jobs killing folks to pay its hospital bills. 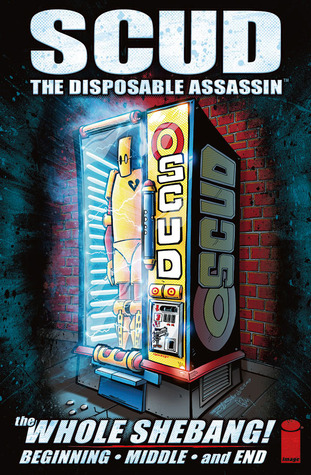 I wouldn't actually get my hands on a real-deal Scud comic for a few more years when I came upon the latest issue at Berkeley California's own Comics and Comix (that place was so 'effing rad.) I fell in love with Scud there and never looked back. The artwork was clean and made great use of Lichtenschein dots, the action leapt to life off the pages, and the humor was right up my alley. If all that wasn't enough one of the main villains was a satanic, necromancing, voodoo-praticing Ben Franklin!

However the magic would not last. Scud stopped being published at issue 20 in 1998 and it seemed like the cliffhanger it ended with would never be resolved. However, as I'll get to more in a moment, that was not the case.

You see, the creator of Scud, Rob Schrab and his roomate/co-write/editor Dan Harmon had set their eyes on Hollywood. The two would go on to pen Monster House, make a TV pilot with Jack Black and Owen Wilson (Heat Vision and Jack) and start up the website Chanel 101. The site featured web series that would get voted by the audience to see if they'd get another episode next week. It spawned such classic series as Yacht Rock, and Schrab's own Twigger's Holiday. It's also the place where a young Justin Roiland wound up showing off a crude cartoon called The Real Animated Adventures of Doc and Mharti, which would end up leading to him and Harmon creating Rick and Morty.

Before Harmon, and yes, even Schrab started working on Rick and Morty though, they had a few more stops along the way. In 2007 the pair became showrunners for the Sarah Silverman Program. Harmon would eventually be let go from the series for a number of reasons, and went on to create the fan-adored sitcom Community.

In 2008, Schrab would finally answer the prayers of his adoring fans and make the last 4 issues of Scud to bring the story to a fullfilling close. Shcrab has said that his original ending would've been horrible due to the fact that at the time of Scud's first run coming to an end he was going through a bad break-up and just hated the world. I guess we'll never know how bleak that first ending would've really been, but what we did get was phenominal and well worth the wait.

Scud's story has been an inspiration to me over the years for a number of reasons, not the least of which is watching two guys go from self-publishing a bunch of funny page books to creating some of the best television ever made. In it's time Scud spawned a Sega Saturn game and a number of doomed comic spin-offs including La Cosa Nostroid, which was a series about cyborg mobsters from the Scud-verse penned by Harmon. Now if we could just get the last goddman issue of La Cosa Nostroid already, Harmon! At any rate, happy birthday Scud! You're great and I'll be rereading you in The Whole Shebang form soon.