The point of this recipe is to use up the dessicating leftover turkey and other ingredients left over from your fall celebration. You already spent enough time cooking a few days ago so lets throw some stuff in a pot, let it simmer for about an hour, and then open a bottle of wine. Keep in mind the turkey was the star of the show a few days ago. Today the herbs SHOULD be the star of the show.

This year I took better notes and have updated the recipe from the one I posted about a week ago. Lastly the soup is always better the second day when the flavors have had more time to meld. 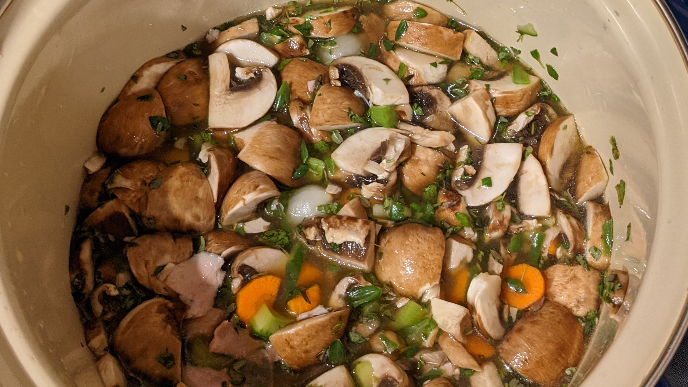 Above: Assembled ingredients before heating

-Left over turkey meat. I usually use the dark meat. I chop / shred until the amount of meat per ladle full looks like the amount of meat I want in a serving. Also keep in mind that I'm trying to use up my turkey so that might be more than you think.

Fresh Vegetables (unless specified)  (really any soup vegetables you like to add bulk)
-Chopped celery (cross section)
- 2-3 carrots or whatever is left (cross section then cut in half)
-1 leek if you have one
-green beans (chop them short so they fit in a spoon nicely. We used french cut green beans this year to get rid of them)
-1x 8 oz bag frozen pearl / petite onions <-- imo very important.
-your favorite mushroom sliced or quartered. I think I usually use crimini but use whatever. I usually go heavy on the mushrooms
-any other soup friendly vegetables we happen to have around
-Some people like peas. I don't
-Sometimes I add some corn but not a lot.

We usually just go crazy with the herbs so these a guidelines. Sorry. Our best batches are very rosemary and sage heavy. Very often we add more after tasting but BEFORE adding the dumpling dough. Plan on tasting after 20 minutes of simmering. You will likely have to adjust your herbs.

Time to make some soup!

Add turkey, vegetables and onions to the cooking pot. You can add the broth first but we decided you can better control the liquidity of the soup if you use the level of the vegetables and meat as a guide.

Add 4 cups of chicken or turkey broth OR add at least enough broth to cover the vegetables to point where the liquid is just below the level of vegetables. (REMEMBER TO RESERVE 1 cup of broth for the flour!) .

Add the herbs and seasonings. Give everything a nice stir.

While the borth is heating, wisk remaining cup of chicken broth with flour. Stir flour/broth into vegetable mixture one it starts to boil.

Reduce heat to a vigorous bubbling simmer and cook UNCOVERED to reduce liquid. Simmer at least 20 minutes before the first tsasting.

TASTE IT. Adjust herbs and seasonings. We often have to adjust salt, pepper, sage, and rosemary. We go heavy on rosemary but that's what we like. Seriously, try going heavy handed with the herbs.

Check soup flavors again at 40 and 60 minutes. Pay attention to vegetable doneness. Once you add the dumplings it's tough to add more herbs/ seasonings. The longer you can simmer the better the herbs will mix. However the dumplings need to cook so DON'T simmer until your vegetables are mush. 2020 note: we simmered at least 60 minutes
Don't panic if the soup isn't super thick. The dumplings will add a little more flour. 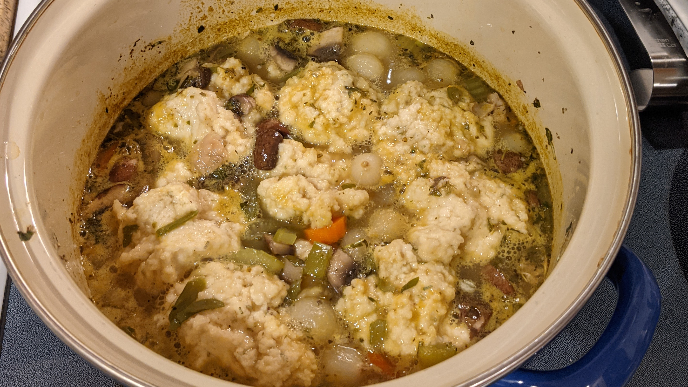 Above: Dumplings prior to cooking. 10-12 minutes to go!

Note this recipe is 1x. You should probably at least DOUBLE this recipe. You may want to triple this recipe to get the right amount of dumplings for the full soup if you used 5 cups of broth. SEE THE PRO TIP at the end.

In a bowl, mix the dried ingredients.

Mix the milk and oil together in separate bowl and then add to the flour mixture.

Stir with a fork until combined. Sometimes I add more rosemary to the dough if I'm not happy with the speckle pattern. Like I said, I really like rosemary.

When the soup portion has simmered enough, drop 6-10 heaping tablespoon mounds atop BUBBLING soup. Big thick mounds are to be avoided. Fist size or smaller mounds. Big thick mounds of dough do not cook as well and are not pleasant to eat. You want dumplings with your soup, not soup then dumplings. Reserve about 1/3 of the dough if you made a triple recipe (see the PRO TIP at the end).

Simmer for 10-12 minutes or until a toothpick comes out clean. Keep pot covered as much as possible.

PRO TIP: Assuming you don't eat everthing in one go, you can remove your portion(s) or soup and dumplings and then spoon more small dumplings onto the hot soup and cover the pot again. This replenishes your dumpling supply assuming you have made more soup than dumpling could fit onto the top of the soup. Keep the dumplings a little smaller because you're using the heat from the liquid to cook them instead of actively heating. OR just simmer the soup a little more while you eat. 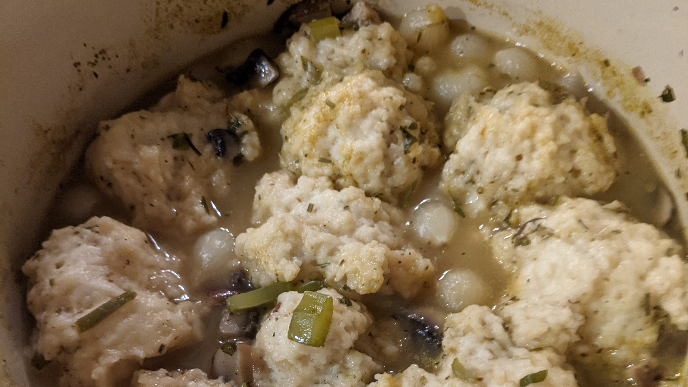