FCC Chairman Ajit Pai will step down from his role on January 20, 2021. The former Verizon lobbyist has been serving in the position since appointed by Donald Trump in 2017.

Here's some words from the Crown Prince of Data Caps himself:

“It has been the honor of a lifetime to serve at the Federal Communications Commission, including as Chairman of the FCC over the past four years. To be the first Asian-American to chair the FCC has been a particular privilege. As I often say: only in America.” He continued, “For the first time ever, we’ve made public drafts of the proposals and orders slated for a vote three weeks before the agency’s monthly meetings, making this the most transparent FCC in history.”

The only thing transparent about Pai's FCC was how deep up his ass he had the hands of Verizon, Comcast, AT&T, and the other carriers. He has set the Internet back 30 years at least, and it will take years to fix what he has broken.

Ajit Pai's family reached out to Shantynews to provide a plea to the Biden administration:

"Please President-Elect Biden, don't send Ajit back home to us. He's so terrible. You know that Reese's mug that he always drinks from? It's actually a milkshake made from Internet service provider lobbyists' sperm, and we only have one mixer in our house. He also makes us participate in his insufferable meme videos. Please reconsider him as your FCC Chair. If he is busy fucking up the Internet, we may have a chance to live our lives in peace."

While it is very likely that Pai will land a job lobbying for ISPs again, we hope he takes a nice long break. Maybe go for a walk... off a cliff. 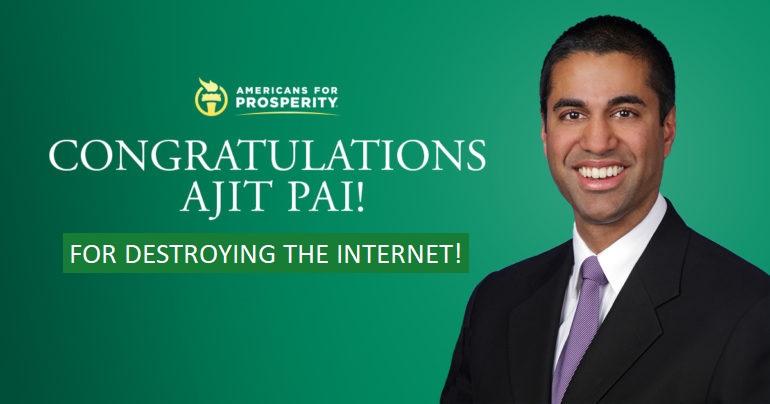 Either way. Get fucked, Ajit.