Hitman 3 is a wonderful game full of levels begging players to be creative in how they approach objectives and targets. In fact, the entire World of Assassination trilogy is great for this. Since I've been spending more time in Hitman 3 lately, I wanted to share some of my favorite weapons and items that directly fit my style of play. 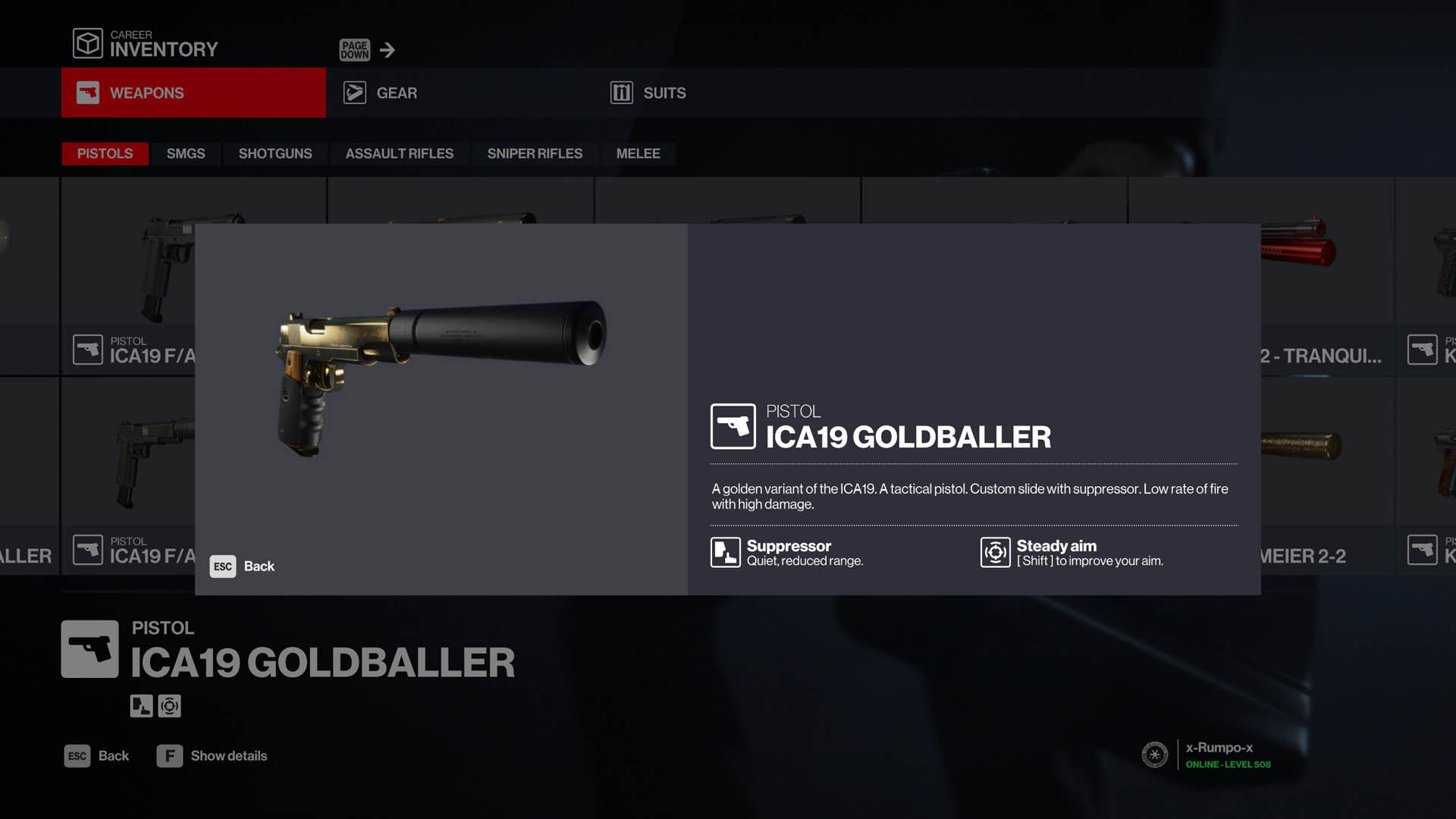 Everyone loves the Silverballer in Hitman, but I'm actually a huge fan of the aesthetic of the Goldballer. This weapon is unlocked in Mendoza, and it's the pistol I bring with me more than any other. It features the Steady Aim perk that allows you to hold Shift (on PC) to focus your reticle and make precise shots other pistols struggle with. Mostly, it just looks cool. 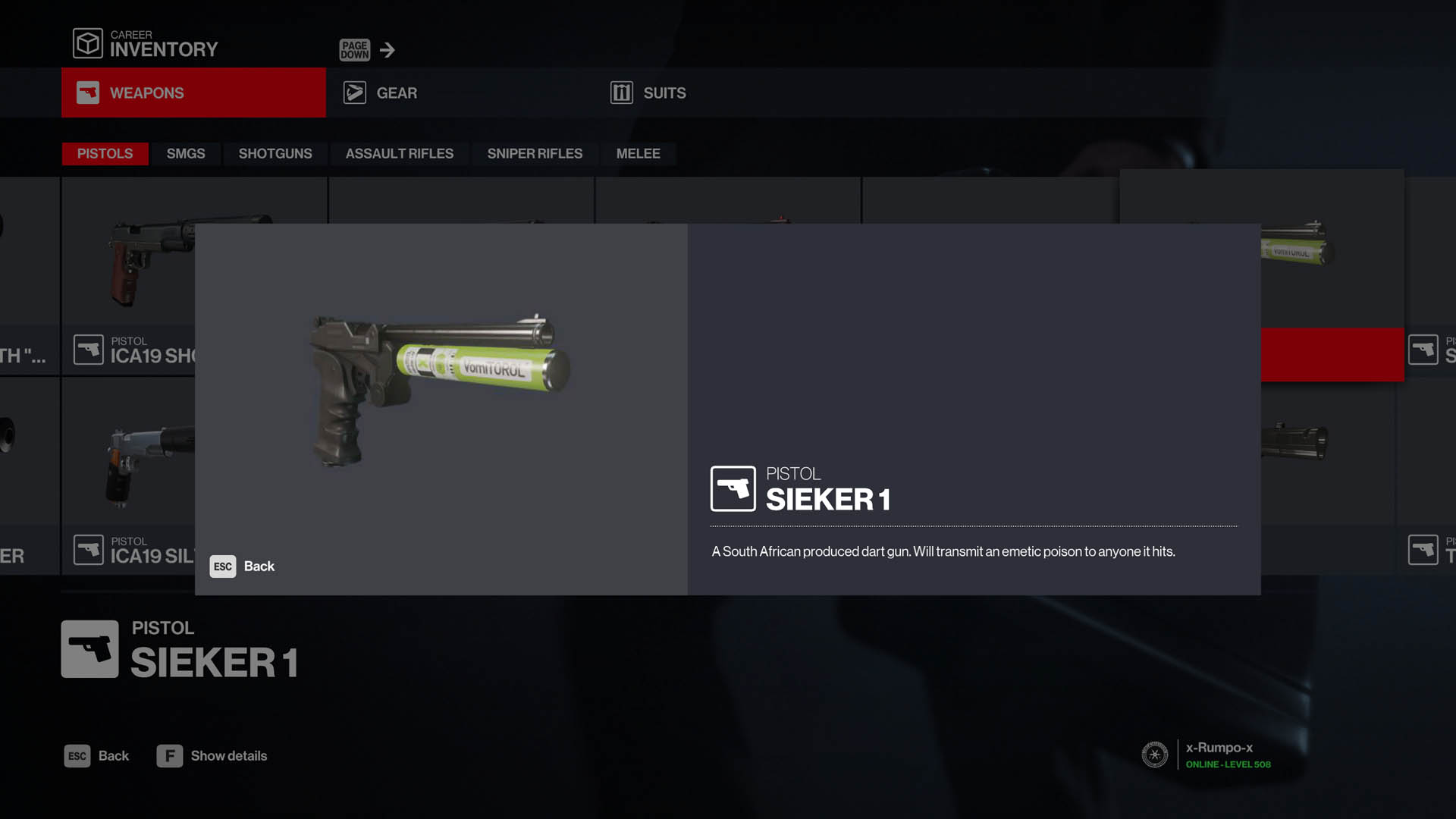 The Sieker 1 is what I like to call the "puke gun" in Hitman 3. If you shoot an NPC with a dart, they will quickly move to the closest place they can safely throw up. This is a great way to move targets to more discrete locations for elimination, but also ideal for removing NPCs who might stand in your way. It can turn Hitman 3 into easy mode at times, but when you have hundreds of hours played, it's a welcome tool to remove a bit of the tediousness of levels. 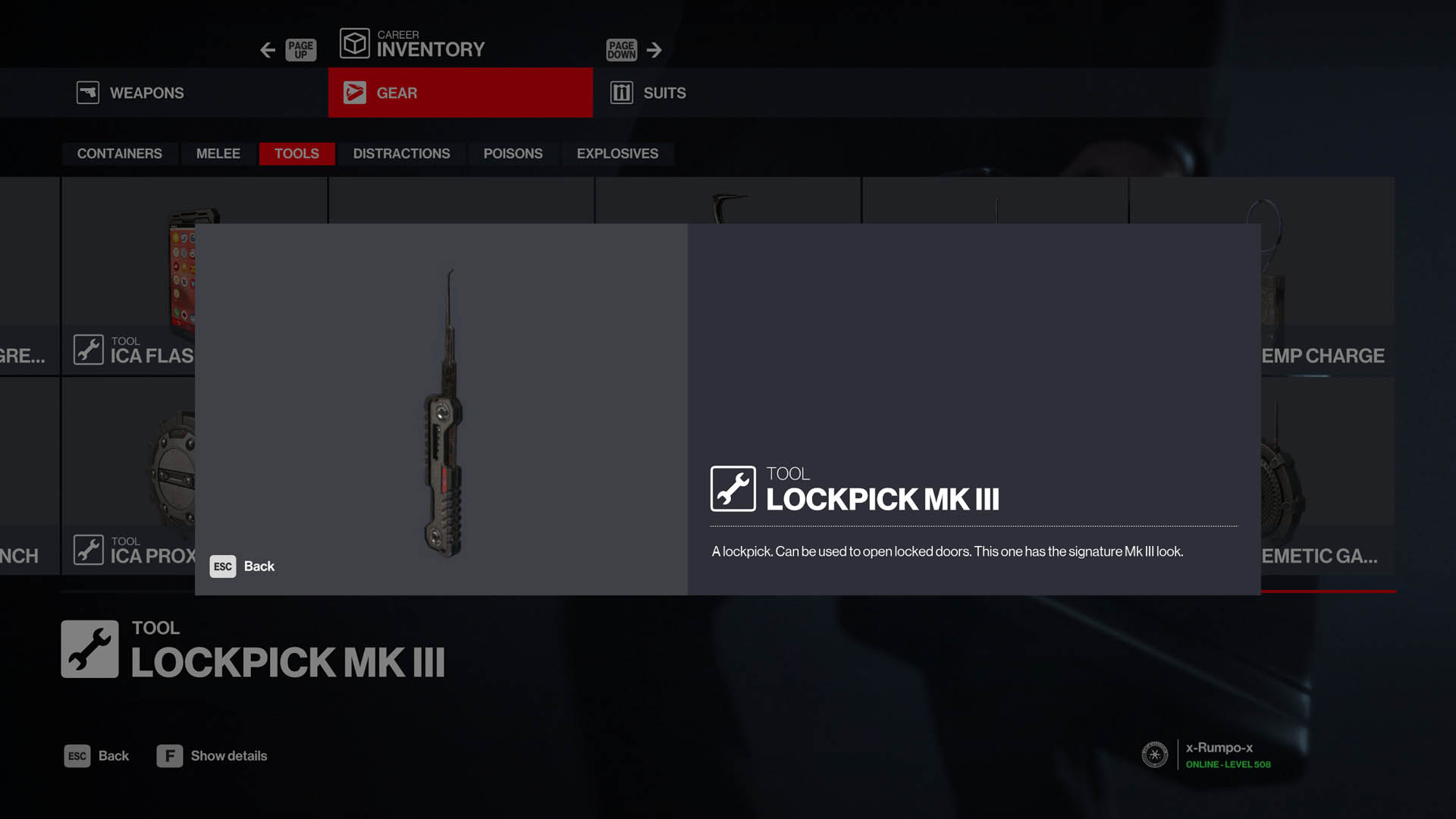 When you don't know what you're getting into in Hitman 3, you bring a Silverballer/Goldballer, a Lockpick, and maybe a couple of Coins. That's a great base for solving many problems. However, I chose the Lockpick MK III specifically because I like how it looks. It's a bit more modern than most Lockpicks in the game. 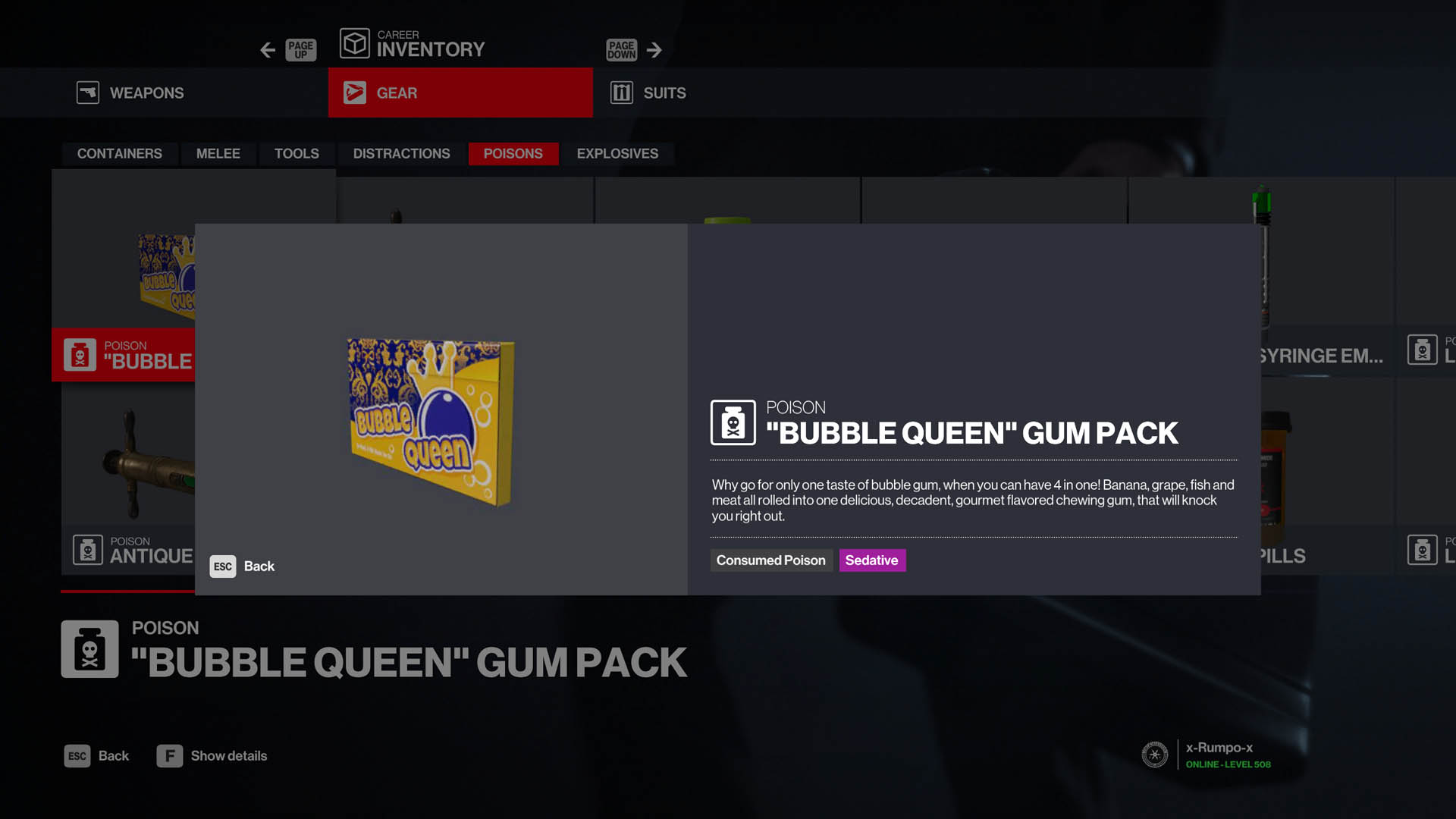 This is one of my favorite additions to Hitman 3 because it safely removes blockers without being too powerful. Normally, if you tranquilize an NPC, they either drop where they're standing, or where they consumed the sedative. With the Gum Pack, you can toss this item where you want the NPC to go to sleep, thus ensuring that their body isn't found. It's a fantastic way to deal with a single, problematic NPC and let you get back on task. 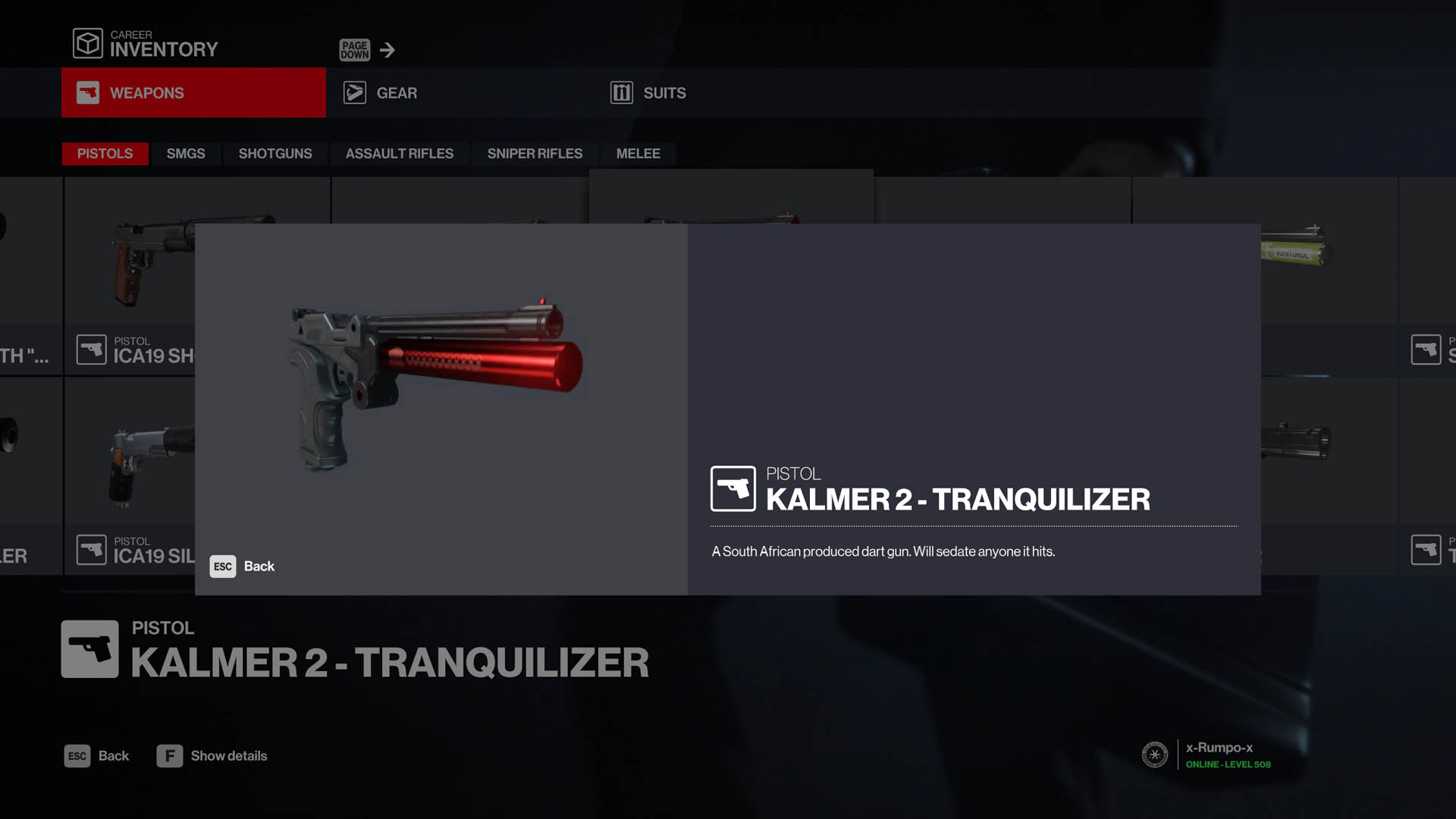 It's not as cool as the Gum Pack, but it carries two shots and lets you safely down two NPCs per run. If you're trying to clear out an area where guard routes don't overlap, the Kalmer 2 - Tranquilizer is a great option. The main downside is you have to equip it into your pistol slot, so you either leave your Goldballer behind, smuggle it, or bring it in a briefcase. 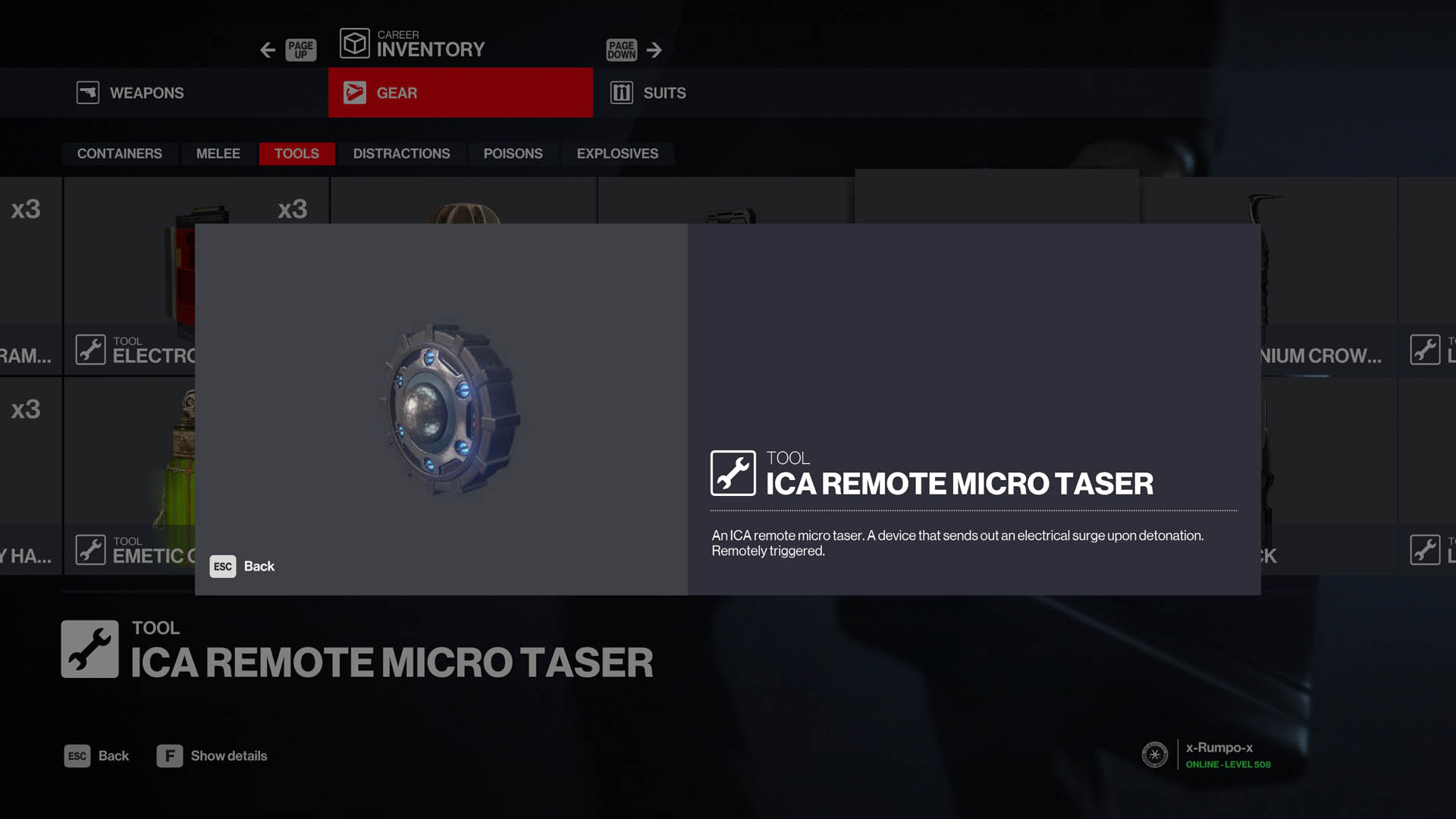 Just add water. Create a puddle, or simply find a puddle, and drop this baby into it. Nobody will spot it given that it's tiny, and you can remote activate it to ensure that nobody gets electrocuted but your target. This is my ideal way for taking out The Rage Elusive Target. 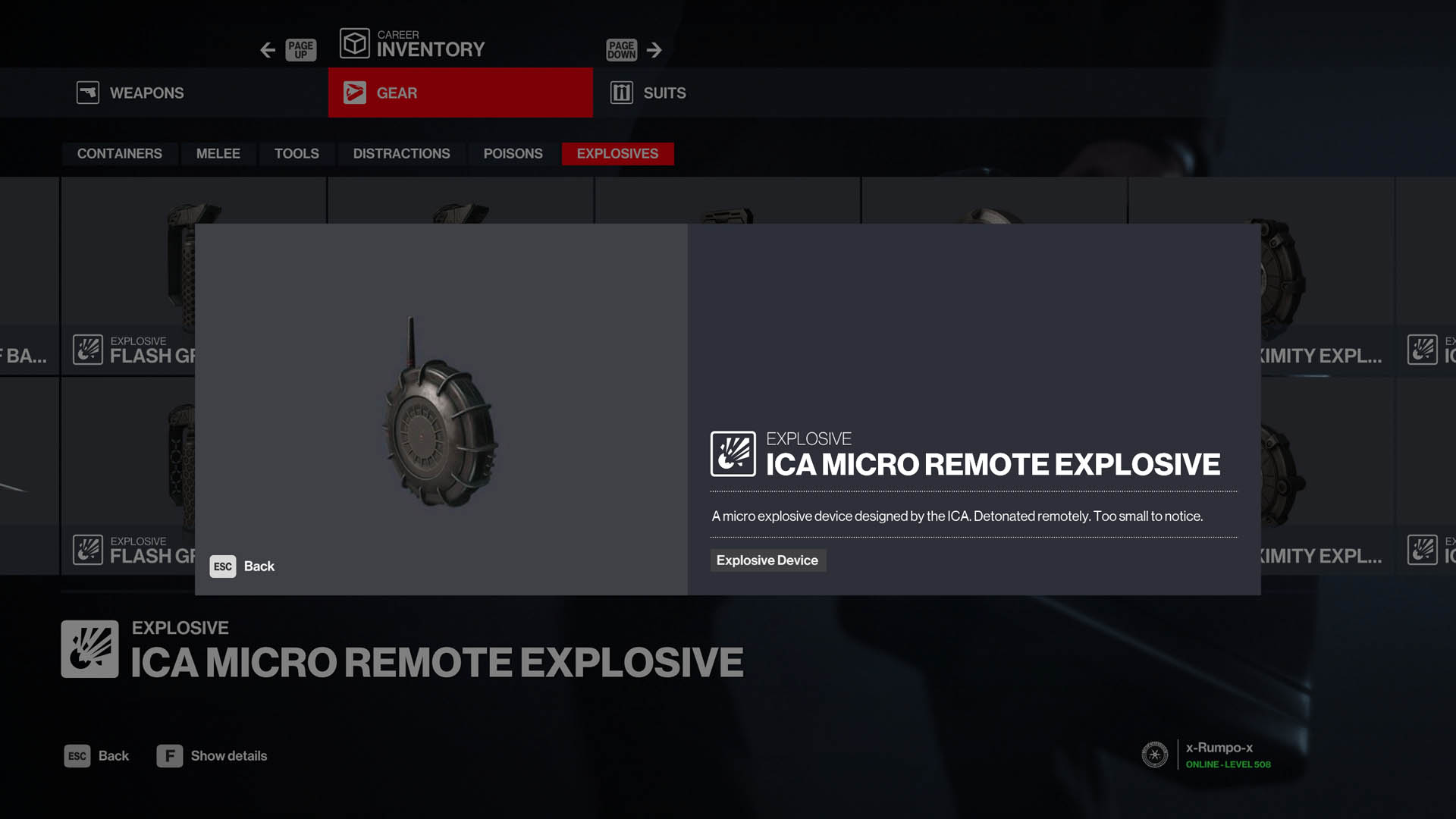 This is my preferred way to cause accident kills with explosions. Grab something that goes boom, stick this on it, and detonate it when your target is close. Just make sure this device doesn't cause the death directly. Again, nobody will spot it given how small it is, so it's a great way to blow things up if you have to worry about witnesses. 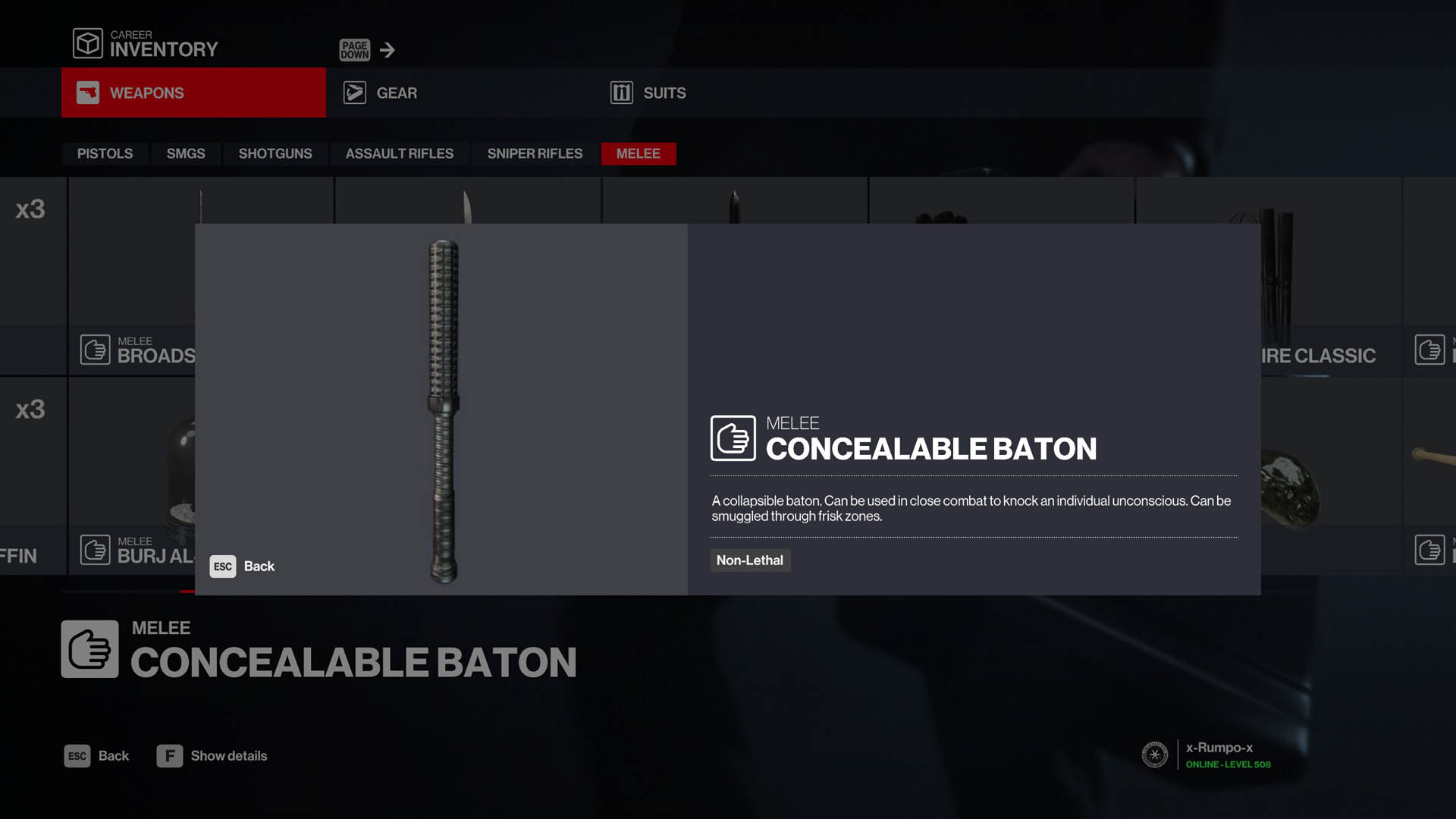 There's almost no reason to take this item with you. You can almost always find something to throw to knock out your targets. However, this baton is cool because you can take it through frisk zones. I also just like throwing it at folks. 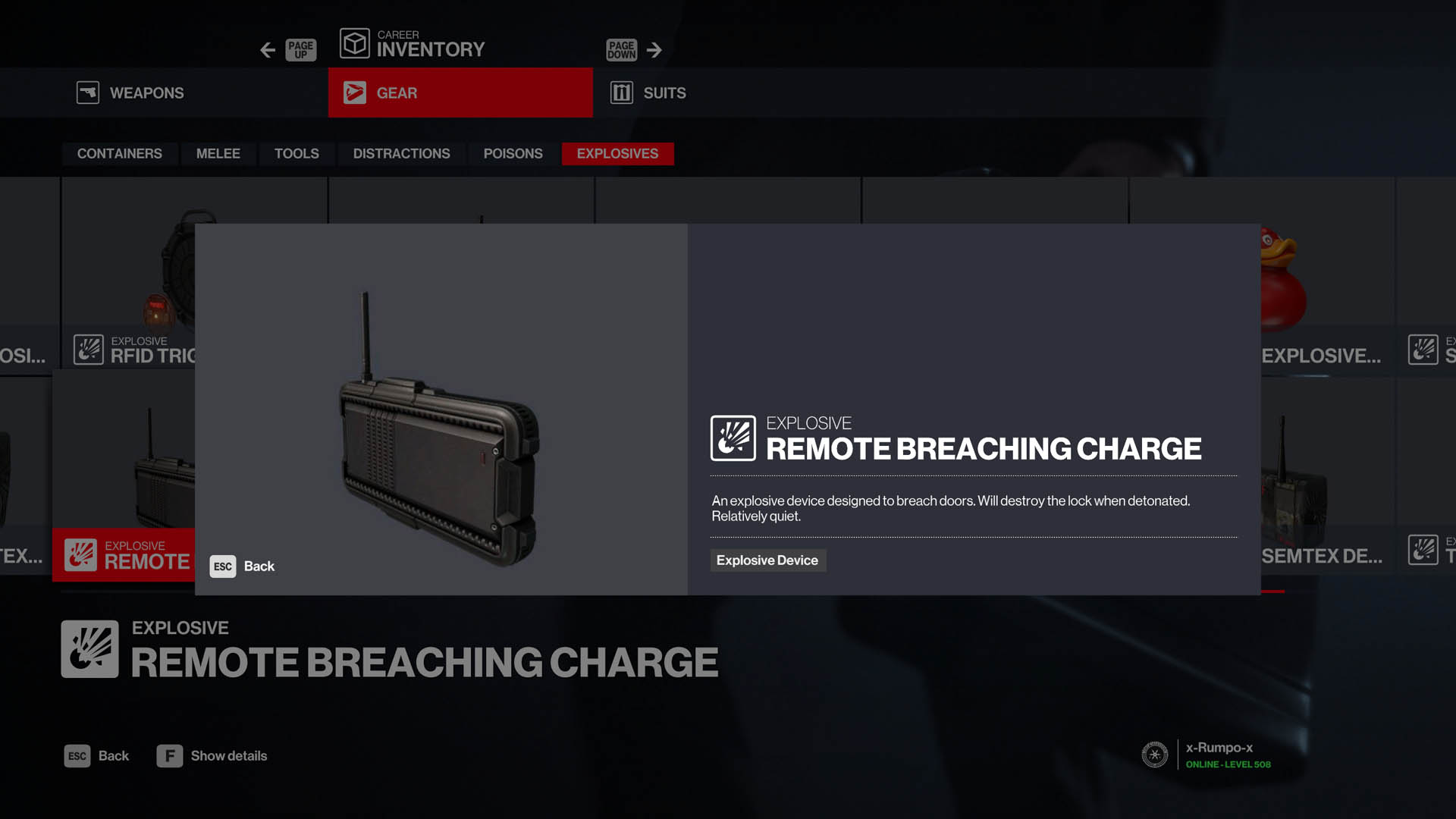 This handy little item is great for not only blowing open doors and weak walls, but also getting explosion kills without alerting the entire map. Knock out your target somewhere away from prying eyes, place this near their head, and boom. Nobody will hear the explosion, your target will die, and you'll keep your Silent Assassin rating. 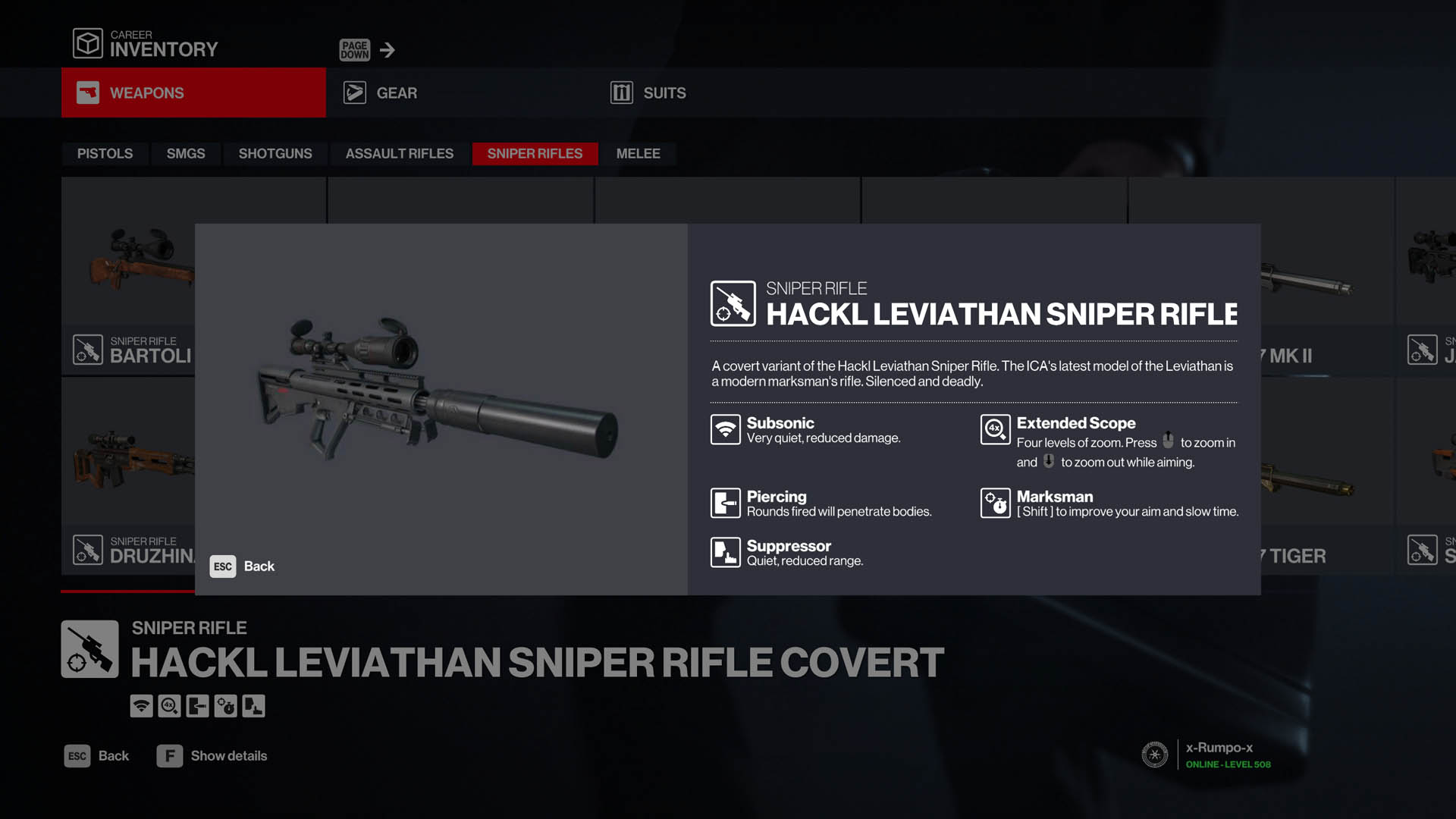 I'm not sure, but this might be the best sniper rifle in the game based on the number of perks it has. It can be fired very close to other NPCs without them being alerted. And it just looks cool. I don't do much sniping in Hitman, but when I do this is usually the option I go with.