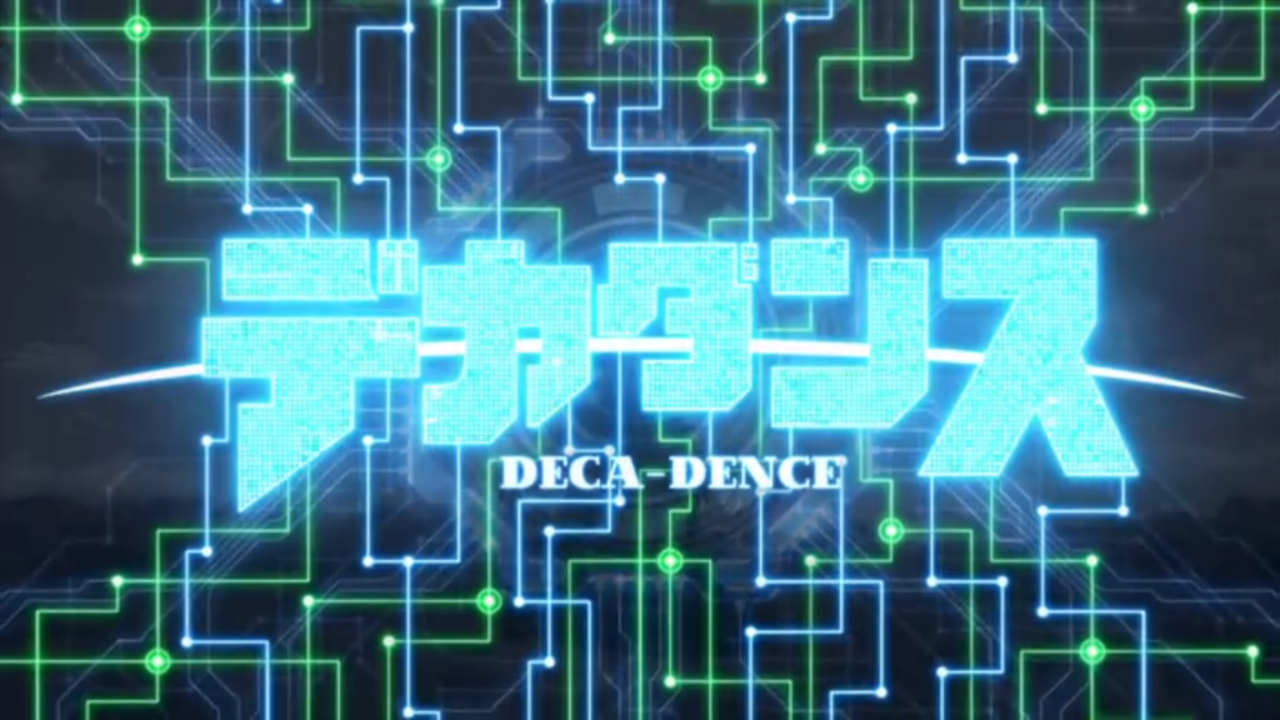 Deca-dence is a show that takes place in the distant Earth future, centered around a mobile city literally called The Deca-dence. The citizenry of the Deca-dence seem to be split into two castes; a worker class meant to toil and maintain the city, and a warrior class. The hero of our story is a girl named Natsume who was has live her whole life in the Deca-dence and dreams of graduating school to become a warrior. The warriors of Deca-dence get to fight the number one threat to humanity; these kaiju-like monsters called "Gadoll". The Gadoll seem to have only one purpose in life and that's finding the Deca-dence and destroying it. They come in all different shapes and sizes—some very rare ones are the size of the Deca-dence itself. Natsume wants to be a warrior because she wants to win the war against the Gadoll so that humanity can live in peace, something that her father died trying to do.

So, understandably, Natsume is a bit disappointed when she is assigned the unglamorous role of working for the janitorial squad responsible for cleaning the Gadoll-derived gunk off the outer hull of the Deca-dence. Her boss, a surly man by the name of Kaburagi, teaches her how to clean the Deca-dence and endures her talking about how badly she wants to be warrior. He tries his best to reason with her to settle down and be grateful for the life that she has, but it's of no use. She's determined to somehow become a warrior. Fortunately (or unfortunately) for her, an accident occurs during a Gadoll attack while they're outside the Deca-dence and they fall down. Kaburagi deftly takes control of the situation and manages to expertly dispatch all of the Gadoll while simultaneously keeping Natsume alive. Even the other warriors are impressed.

Upon witnessing his inspirational skill as a former-warrior, Natsume begs Kaburagi to train her to become a warrior. Kaburagi is won over by her fighting spirit, and decides to take her under his wing. Though very reluctantly. 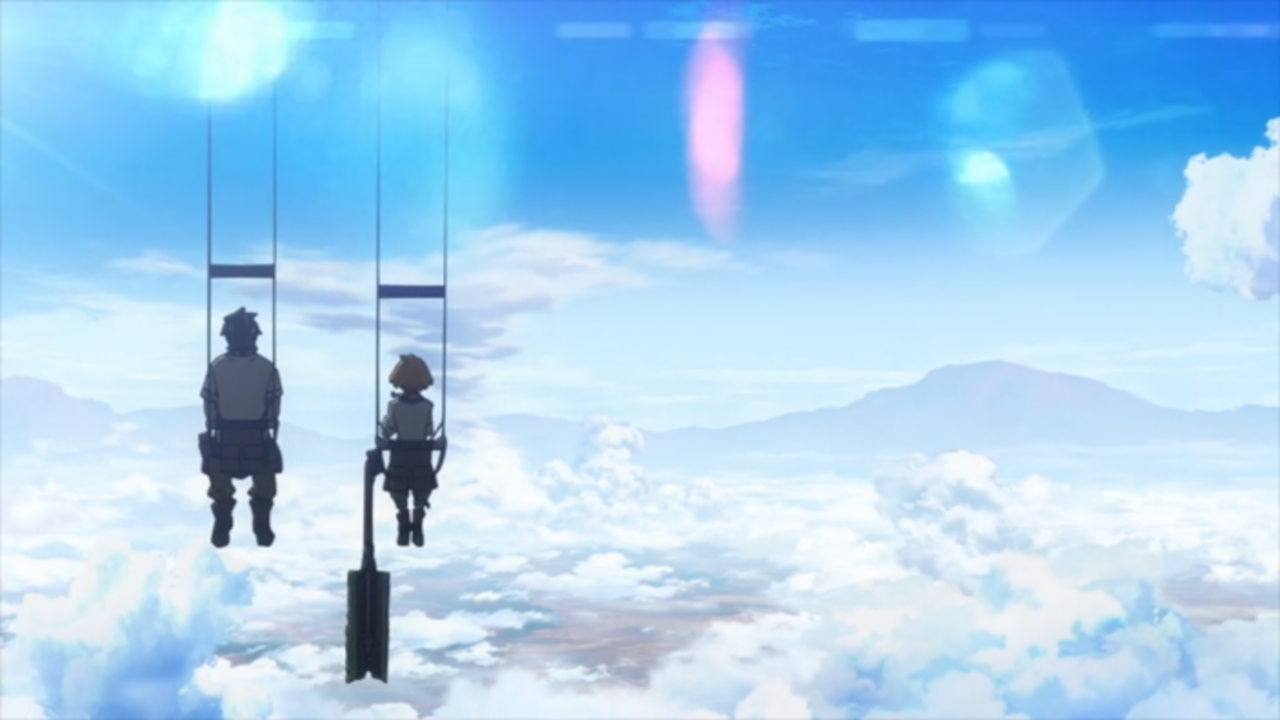 All of this is in just episode 1, and for me to say what happens next in episode 2 goes too far into spoiler territory. You heard me right; episode two of this 12-episode anime is huge spoilers. It's such a huge twist, I wasn't even sure I was watching the same show. Nonetheless, unlike Rian Johnson, the show earns its subversion and doesn't work without it. Like, seriously, this is SSSS.Gridman levels of mindfuck. Plot details aside, the show is brilliantly-crafted and well directed. In terms of how the show looks, it reminds me a lot of Gurren Lagaan. Every episode seems to bring at least 1 quality action set piece. The script is incredible and, at times, absolutely devastating with how beautifully tragic it is.

Literally the only flaw in this show is, for some strange reason, I kept falling asleep watching the first episode. I don't know why. There's nothing boring about it other than perhaps being very familiar with shounen tropes.

Don't sleep on this show! It's really good! 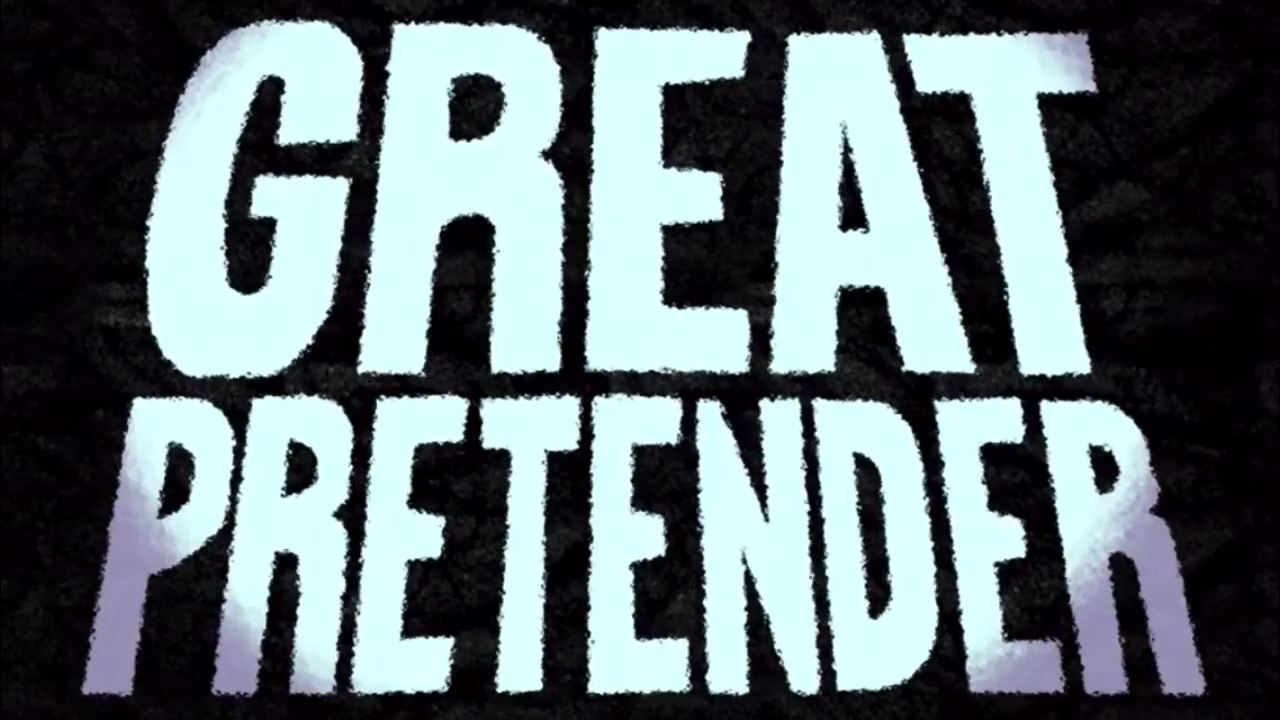 What is The Great Pretender?

The Great Pretender is an anime about an unlucky man named Makoto Edamura. His father was a renowned prosecuter that had been disgraced and jailed in a national scandal, and his mother was dying of cancer in a hospital. Desperate for money, he took on a sales job but only to find that the company was just a front for defrauding their customers. Nonethless, he falls in with the wrong crowd and continues to work as a con man until one day he meets a man named Laurent. Laurent happens to be visiting Japan but on his way back to LA, and at this point the police were almost onto Edamura, so he decides to join Laurent and flee the country. It's there in LA that Laurent sniffs out that Edamura is a con man, and puts upon him a new job to con a crooked Hollywood executive out of money by selling him fake drugs. Things escalate from there. 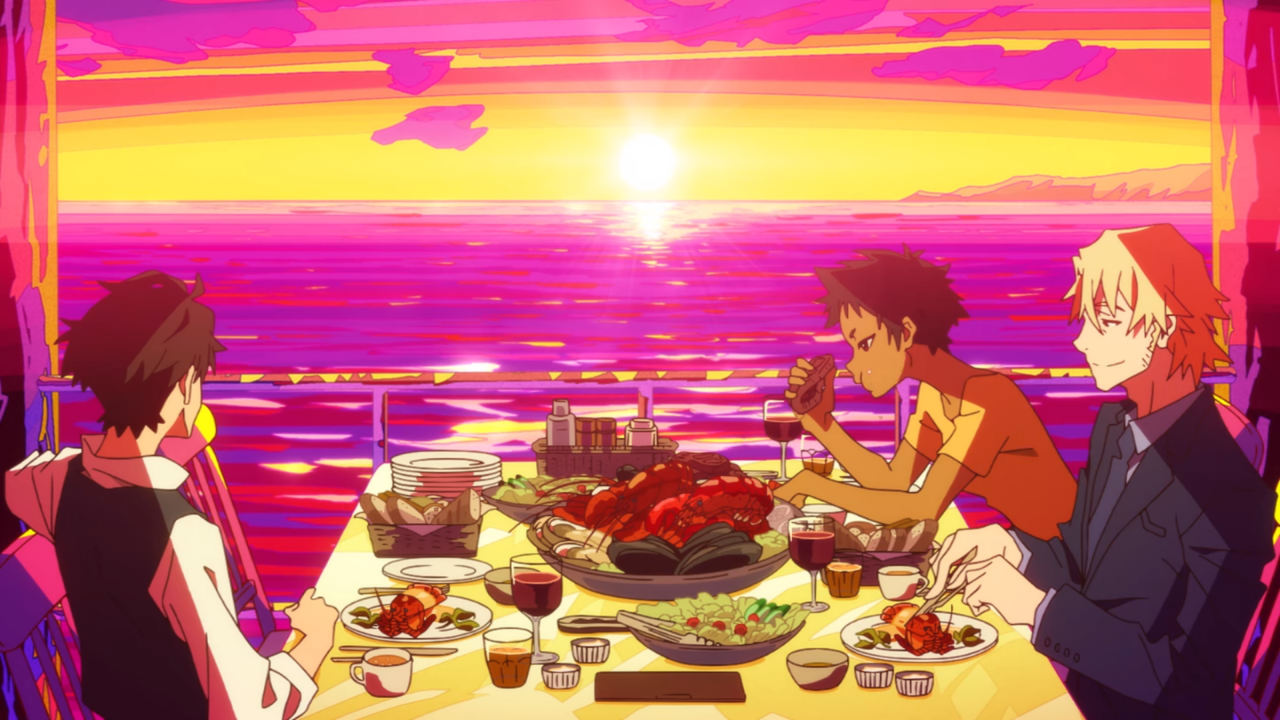 The 14 episodes of Great Pretender are split into three different locales. The first series takes place in LA, and has an unmistakable Breaking Bad feel to it (Indeed, one of the characters even references 'he name 'Walter White' at one point, so the show is aware). The following two locales, however, have their own feel as well. Each locale explores the back story of a main character and shows just how sad and lost their lives have been. They all have their own formula of building up the mark, showing what's at stake, something goes wrong and they're fucked, and then finding a way to triumph. It's predictable, I suppose, in that regard but the How did they do it? usually never is.

The screenshot above hardly does this show justice, by the way. It doesn't quite look like anything I've seen. It sorta reminds me of the few episodes of Devilman Crybaby that I bounced off of (I didn't like that show). Every new locale, it's like the art direct grabbed a bag of skittles and was like: 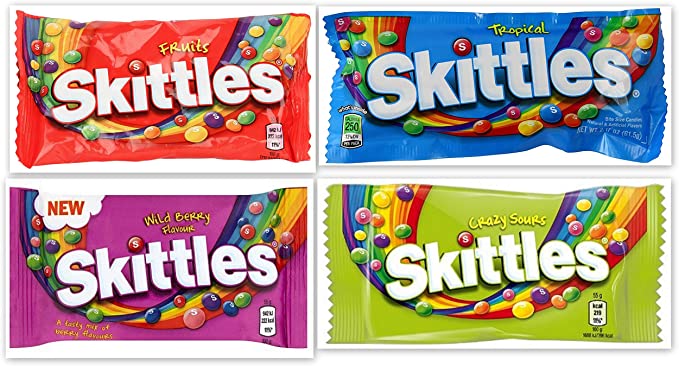 Whatever comes out of this bag are the colors we're going to use.

Nearly everything is sharp and angular. Light isn't just a matter of luminance; shadows become a dance of equally-vibrant hues. It's a treat to just watch the wide establishing shots and just take it all in.

The last thing I want to comment specifically about this show is the ending-credit sequence, and I'm gonna spoil the surprise it gave me so stop reading now if you already want to watch the show. The ending credit sequence is a cute sequence of dancing cats with one main cat that goes through different struggles. The symbolism roughly lines up with the three arcs in the show. The music for the entire sequence is the song Great Pretender by none other than Freddy Mercury. I'm not... like--I guess I wouldn't really categorize myself as a "fan" of Queen because I don't really listen to Queen of my own accord, but I don't dislike Queen, either. With that said, when you consider the symbolism of the cat, and the timber or cadence of Freddy Mercury's singing it just breaks my heart every time. It's like... one of the best end-credits sequence I've ever seen--and there are a surprisingly large amount of awesome end credit sequences in anime!

My last advice about this show would be to not give up after the first episode. Watch the 2nd episode, too, at least. Nothing particularly wrong about the 1st episode, but the 2nd episode is where things started to "click" for me. 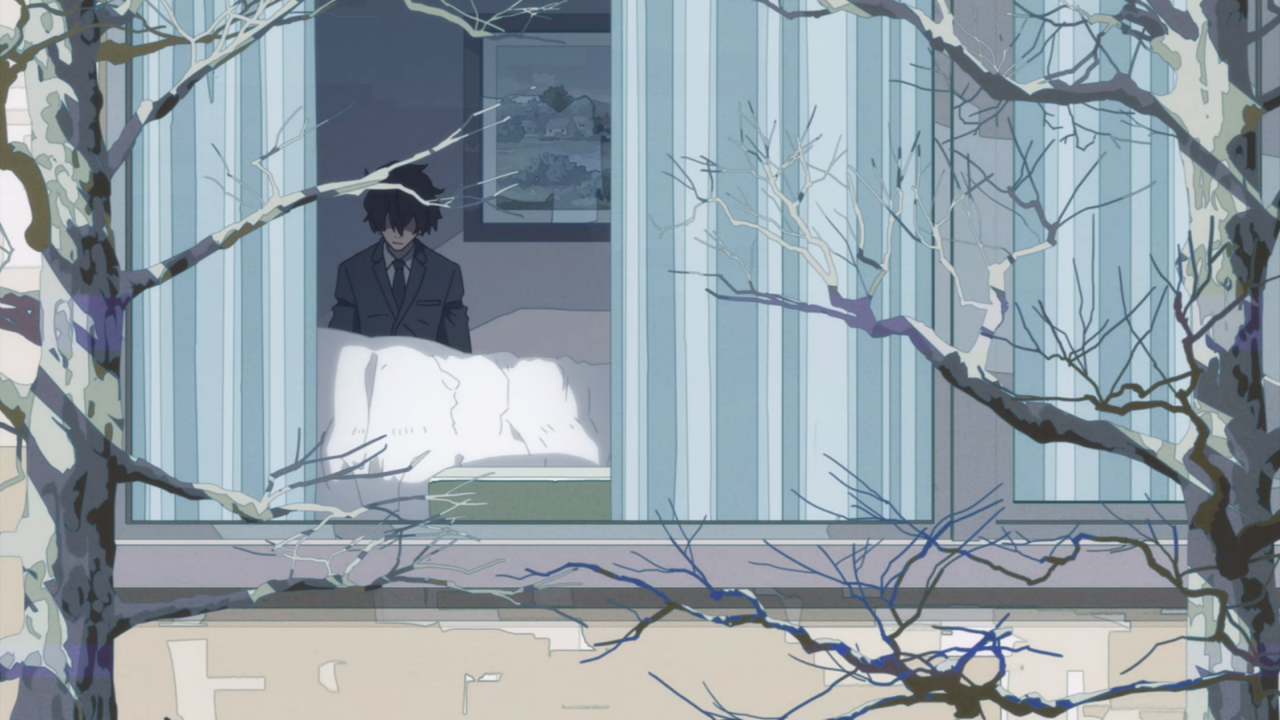 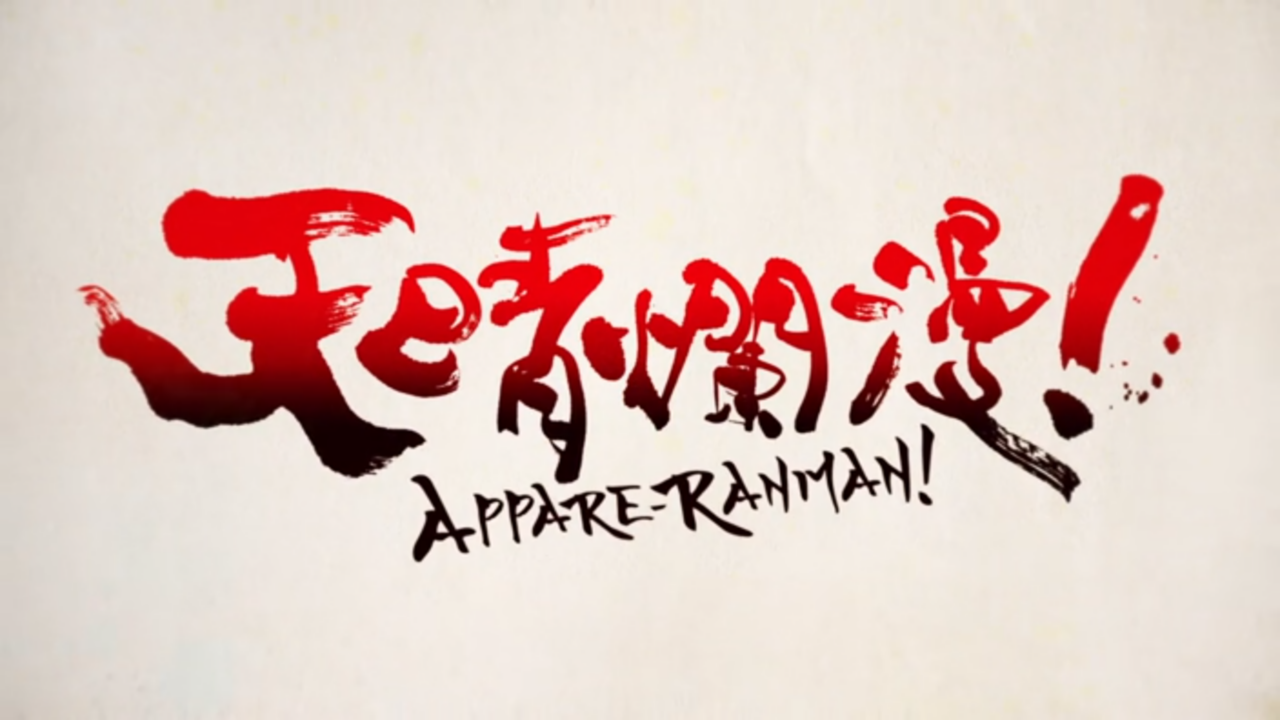 Appare-Ranman! (hereby shortened to AR!) is a racing anime that kinda takes inspiration from Mad Max! and uh... Shanghai Noon? You remember that movie with Owen Wilson and Jackie Chan? It takes place in the wild west of America in the late-late 1800s and is basically a canonball run of characters with various racing uh... "automobiles"... across the country, well before there were any super highways or even paved roads for that matter. I use the term automobile loosely because while some of these cars look recognizable or even modern-ish, some of the designs are straight up bizarre. 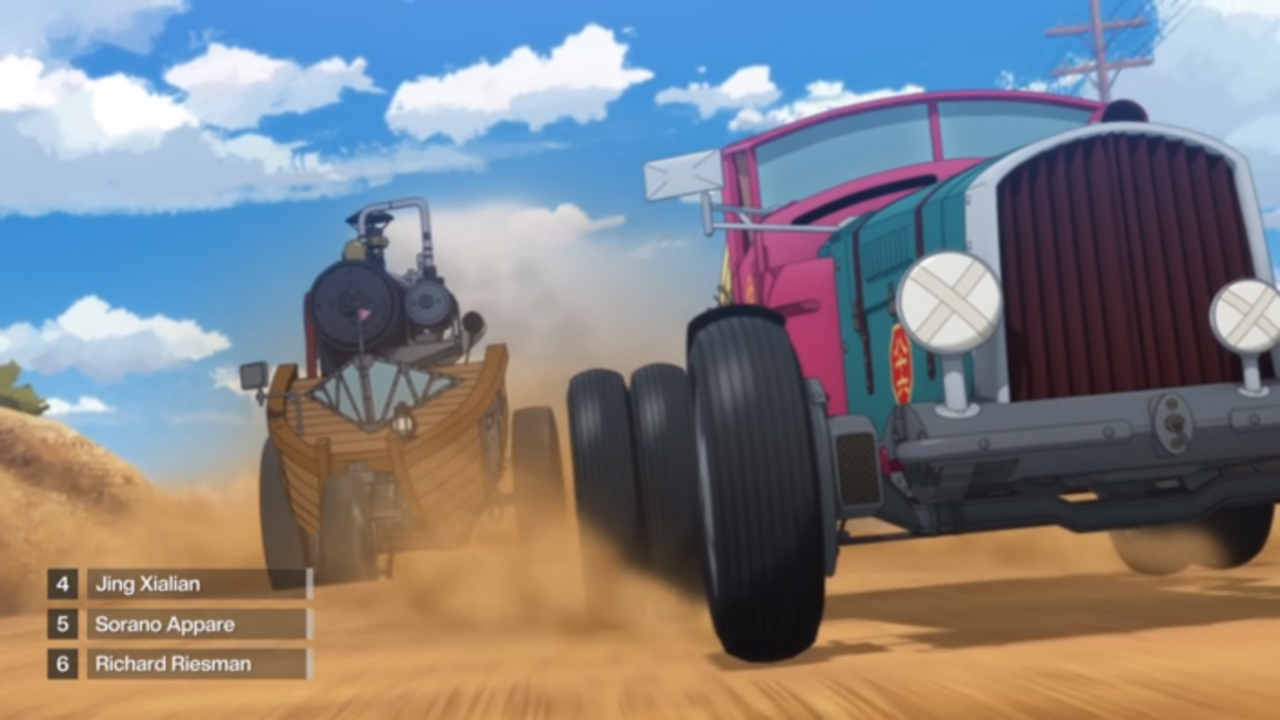 I know Ayn Rand is a bad word around here because of some sadly confused rhetoric and appropriation, but to those of you that care one strength of this show is that it's a strong showcase for Objectivism the more I think about it. It's centered around an eccentric inventor wunderkind named Appare who is ostricized from his native country of Japan for being too weird and dangerous with his inventions. He gets the idea in his head to move to America and that's where he learns of this cross-country race where the winner takes home a fortune. Lucky for him, he happens to have a steam boat that he's able to convert into a steam... car. Everyone around him doubts his methods and there's a general skepticism around science or pragmatism that Appare just shrugs off. The show even brings up topics of sexism and racism and demonstrates how Appare sees those as irrational concepts, caring only about his passion for racing and inventing. He's an alright dude, if perhaps a bit self-centered... but the show is at least aware enough to point that out as a character flaw that he himself has to recognize and work on.

All this aside, AR! has a rather... sophomoric feel to it. It looks fine. The writing is okay I guess. While watching it, I can't help but be reminded of Trigun. Trigun had a crazy cast of outlandish characters and also similarly dips its toes in heavy concepts without saying too much about them ("love and peace!"). The fighting sequences are flashy yet implausible, just like Trigun. The drama and tension is also kinda overwraught in the same way Trigun was. Maybe it's just me, but this show is kind of hard to recommend because I can't shake this Trigun comparison. Can't quite put my finger on it.

Try giving the first two episodes a go if it sounds interesting, but if you drop it that would be understandable.