Like many fat Americans, I have come to fall in love with Formula 1 auto racing over the last several years thanks to exposure to the sport from the Netflix original series Drive to Survive. After binge watching the show, I began to follow the sport more closely via VOD recaps of the races on YouTube. Eventually, I caught the sickness so bad that I began watching coverage of all the events surrounding a Formula 1 Grand Prix, including practice and qualifying sessions.

All this brings us to the 2021 Belgian Grand Prix that kind of took place at Circuit de Spa-Francorchamps in Stavelot, Belgium. This event was surrounded in lots of hype for a few reasons, primarily because of rumors swirling around about where some drivers would be moving to for next season’s races. Also, the F1 season had been on pause for several weeks for the summer break, so everyone was anxious to get back into the normal swing of things.
Going into the race week, it was known that inclement weather might end up playing a major role in how the weekend’s proceedings would shake out. By the time qualifying was ready to begin on Saturday, the track was a wet mess. The field of drivers began the qualifying session with some hesitation. 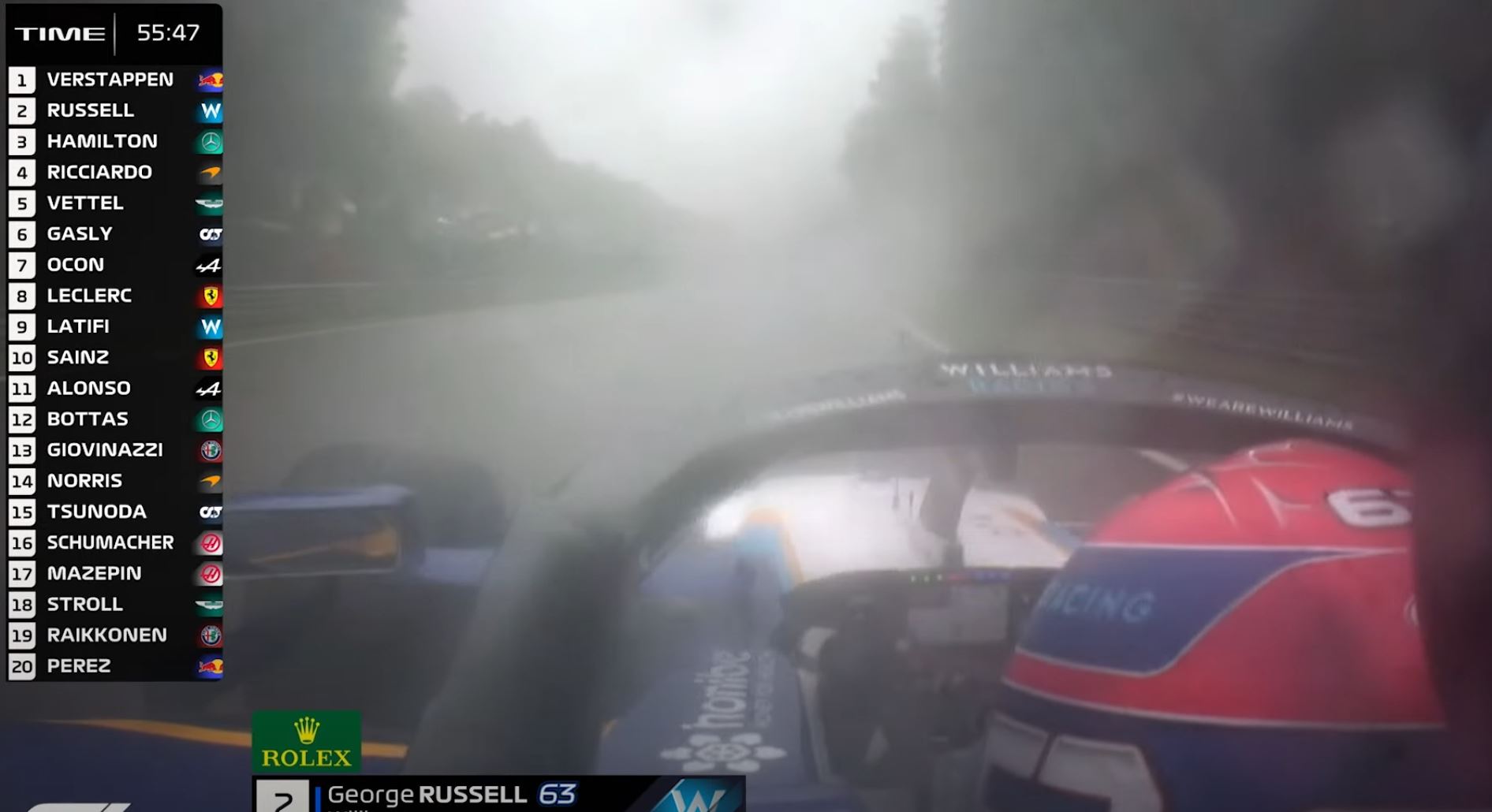 For those who aren't familiar with the F1 qualifying process, all drivers must set an official lap time to be eligible for the race, with race starting order determined by how fast qualifying laps were. The event is divided into three sessions. In the first session, only the drivers with the fastest fifteen laps will move onto the next session. In the second session, the fifteen remaining drivers must once again set official lap times with the top ten drivers moving on into the third and final qualifying session. In the third session, the fastest lap is awarded pole position, allowing that driver to start the race up front.

Prior to the third qualifying session, the weather at Circuit de Spa-Francorchamps turned worse with the rain continuing to leave the racing surface full of puddles. Several veteran drivers contacted the race stewards to complain that conditions were unsafe for those who were preparing for the third session. Despite the objections, Race Director Michael Massi ordered the qualifying session to start in near-monsoon conditions, despite reports that the weather would be clearing within the next twenty minutes.

Predictably, Lando Norris, a young driver who had previously had the fastest time in previous sessions, left the pit area to begin his attempt at setting a qualifying lap. Mere seconds after he left the pit lane, Norris’ car hydroplaned on Eau Rouge, the iconic chicane that makes up the second and third turns on the circuit. Lando’s car hit the wall at nearly 200mph and was sheared in half lengthwise. Thankfully, Lando was not seriously injured, though nearly everyone watching from the paddock lost the color in their faces when seeing the crash live. Undeterred by the new development, Massi ordered the session to continue and after the wreck was cleaned up, the weather improved enough for the remaining nine drivers to set qualifying laps. 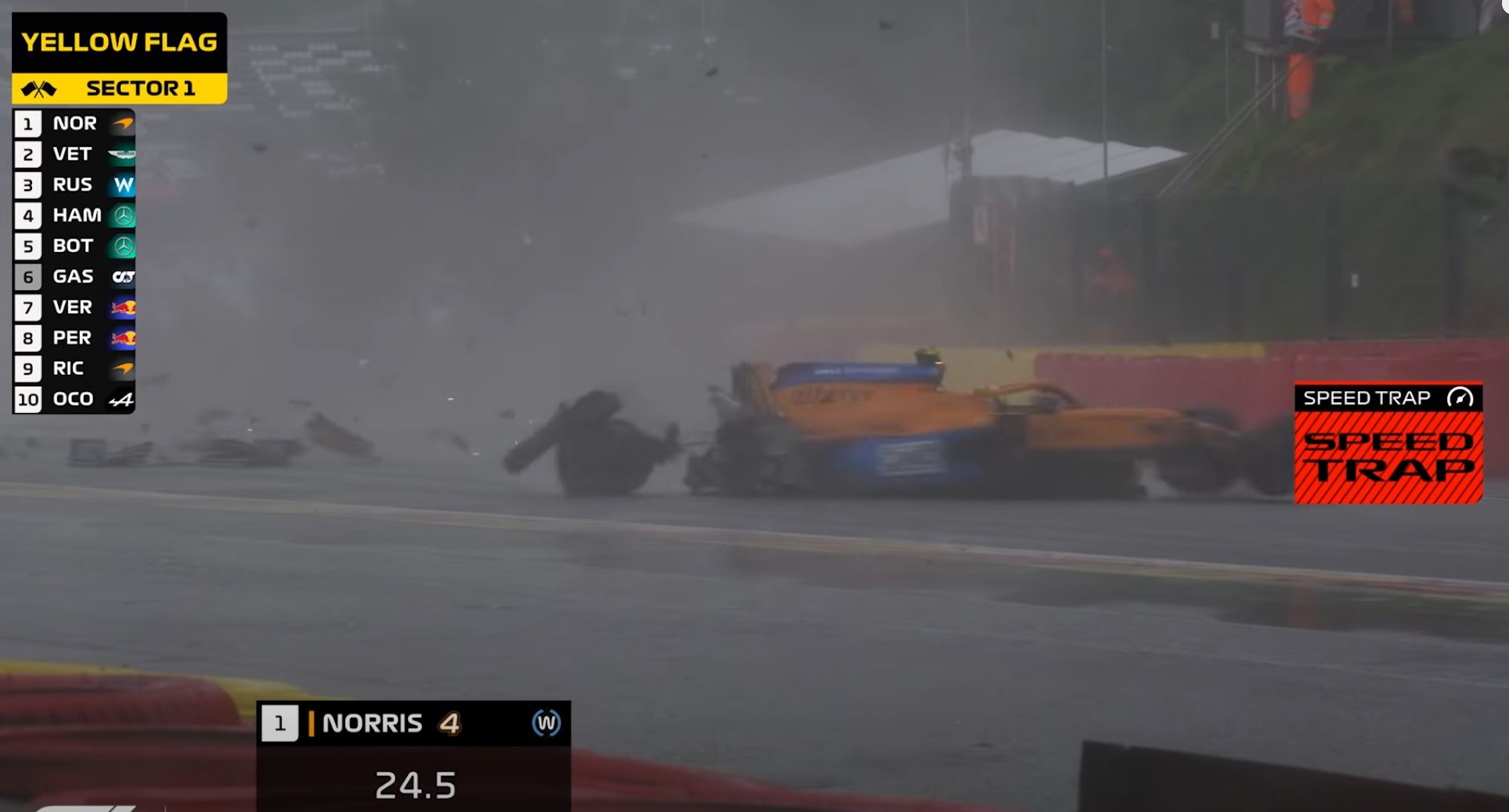 Thanks to a variety of factors, the torrential rains, in particular, young driver George Russell managed to set the second fastest time for the field. This was a big surprise to almost everyone, as the Williams team car Russell drives is notably slower than the rest of the pack. Russell’s qualifying lap was something special, the first time Williams qualified on the front row in years and the greatest moment in Russell’s career so far.

Despite the uncertainty of the weather conditions and how F1 administrators were handling the event, spirits were high entering Sunday’s race. Sadly, the weather refused to let up through the night and into the morning at Circuit de Spa-Francorchamps. The track was in even worse shape than it had been in qualifying. All the drivers left the pits and their teams got the cars set up on the starting grid. As is tradition, all cars then make a formation lap where they make their way around the circuit at low speeds before coming to a stop on the starting grid and wait for the race to start.

Even at the low speeds required by the formation lap and with drivers following behind the safety car, Red Bull driver Sergio Perez lost control of his car and collided with one of the circuit’s walls. Save for pole sitter Max Verstappen, none of the drivers could see more than a foot ahead of their driving masks due to the excess water spray from the cars in front of them. As the field waited on the starting grid, the decision was made by Race Director Michael Massi to postpone the start for fifteen minutes in hopes that the weather would ease up a bit to allow for a safer race.

After the delay wrapped up, conditions had not improved and the start was delayed yet again this time with drivers being instructed to return their cars to the paddock. This extra time allowed Red Bull mechanics the opportunity to repair Sergio Perez’s car and race control announced that Perez would be allowed to compete in the event (though he would be required to start at the back of the pack as a penalty for the formation lap wipeout). The fans in the stands at Circuit de Spa-Francorchamps had begun growing weary of how things were shaking down, especially after they spent a week being miserable in the rain so they could make it to Sunday’s race.

Race Control continued to delay the race start over and over, despite no changes in the weather and reports that the precipitation would only get worse as time went on. After the start of the Belgian Grand Prix had been delayed over three hours, Race Control announced that the Grand Prix would begin under a safety car start, where all drivers would start at low speeds following the safety car until their tires could dry up the racing surface somewhat. This farce went on for a little over a lap and a half as the weather conditions were now drastically worse than they were during qualifying or even when the event was supposed to start.

Race Director Massi then informed all teams that the cars must once again return to the paddock. Once all the cars were off the track, Race Control announced to those in attendance that the race was over and was declared finished because two laps had been driven. The drivers who qualified in first, second, and third would be awarded points as if they had achieved podium finishes.

What a load of wolfshit from the leadership at Formula 1. Everyone knew that conditions were unsuitable for racing and they kept up the charade that the event would begin. They had declared that a race had occurred, even though cars never got up to speed and passing was forbidden. Many of the veteran drivers were quick to call bullshit and the fans on hand to see this live must have enjoyed that kick to the stomach after suffering in the rain for ten hours. 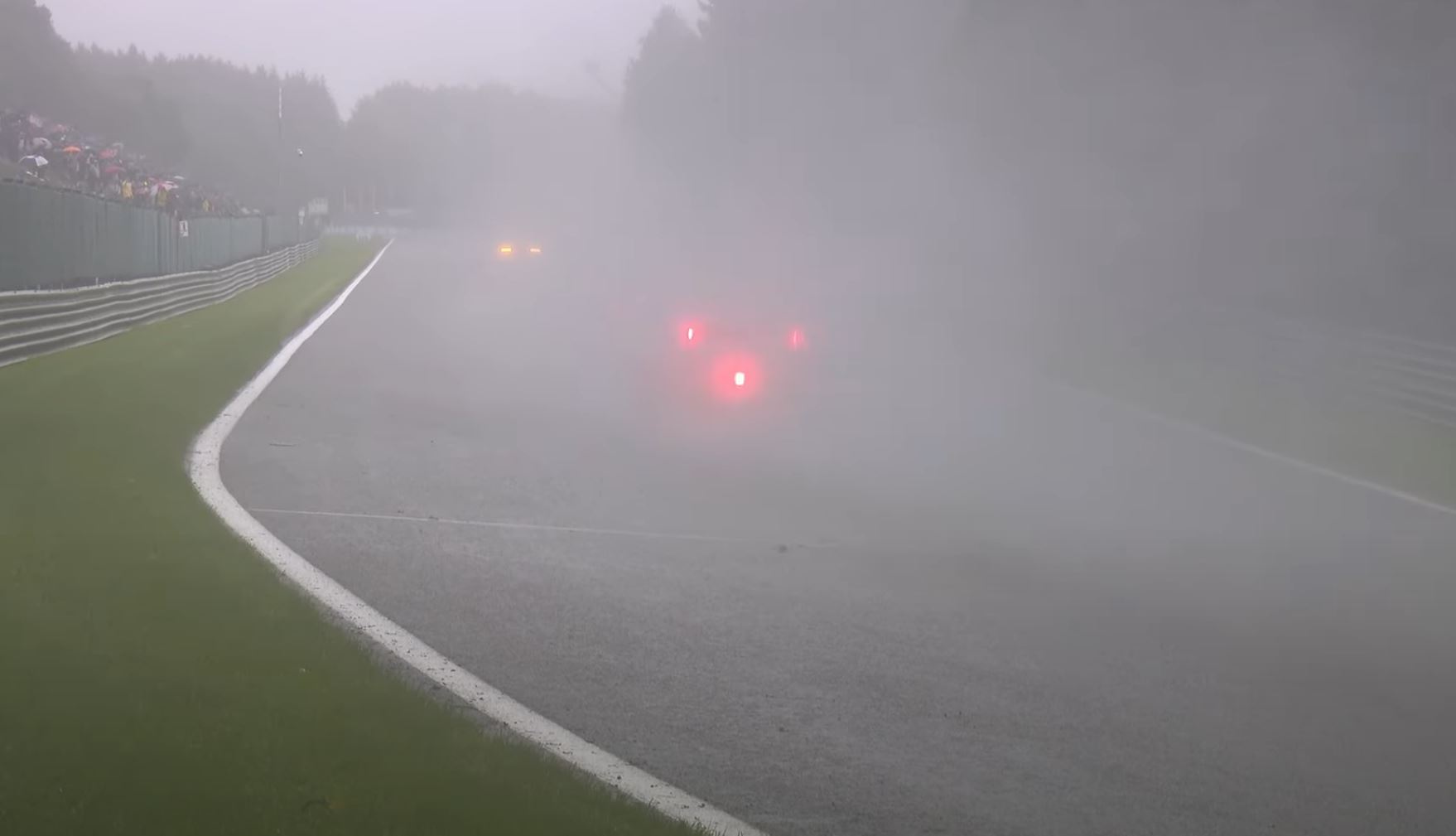 Even worse, George Russell was awarded his first-ever podium finish, which under any other circumstance, would be a moment that everyone could enjoy. Race teams who had chosen to take things easy in qualifying with a strategy to make up position during the race were left with shit in their hands. Formula 1 leadership sure seemed happy as the two-lap “race” was just enough for them to skirt any legal obligation to TV networks and sponsors. God forbid they postpone the race until Monday.

I’m super happy I worked hard to get all my ducks in a row to enjoy this race on Sunday. Also, because I’m an idiot, I’m already looking forward to this week's race at Zandvoort (and can’t wait to see what stupid shit F1 pulls).