Hey folks! I was dealing with some personal things and then E3 and E5 hit back-to-back so it's been a minute since I've had a chance to sit down and share my love of all things delicious with you. With that in mind, I thought I'd talk about a very special and unique little piece of East Bay food culture that I hadn't had since my Junior year in High School until about a year or so ago. 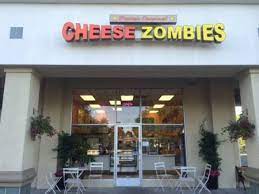 The cheese zombie was a staple breakfast food for high schoolers in the Mt. Diablo Unified School District when I was a teen in the 90's. But, it had been around for a few decades before I had even got there. The concept was simple: put gooey, delicious, Velveeta-esque cheese into the middle of a dough ball, bake said ball, and devour. They had another version that also threw a breakfast sausage into the equation.

I would get one just about every morning because I got to school way too early thanks to having to attend seminary school at the buttcrack of dawn. Otherwise, you were lucky to snag one in between classes or during a lunch rush. These were a very coveted menu item.

I never thought I'd have one again until a friend of mine posted a pic of themselves chowing one down. It turns out that after one of the bakers retired from working for the shcool district and had opened up a spot in rural Concord, CA.

I don't think I could've got in my car any faster than I did to make the rougly 30 minute trek to Patty's Original Cheese Zombies to relive one of my most preciously paletteable teen memories. I'm pleased to report that the cheese zombie and its breakfast-meat-bearing bretheren are just as good as they used to be. I don't think they've changed a damn thing about the kind of cheese used or the dough, although there are a lot more options as far as what they're cramming into those doughballs.  While I still dig on the two original ones, I gotta say that throwing bacon and eggs into the mix is a welcome addition.

I'm not sure if there are other hometown iterations of the zombie around the nation being made somewhere out there by some anonymous lunch ladies, but I like to think this is another little piece of Bay Area food history that you can't find anywhere else. If you ever somehow find youselves in Concord, CA go check it out, not that there's really any reason to go there other than for a zombie if I'm being totally honest.