Guardians of the Galaxy: The Telltale Series Review-in-Progress

(Note: Per Shacknews editorial policy, episodic games are given a review-in-progress during its initial episode's release, with a full scored review to follow once the game is released in full.)

Telltale received wide praise for reinvigorating the adventure game genre with The Walking Dead, but that formula has now become a canvas over which it paints a steady stream of new stories. The Telltale engine is virtually a medium in itself, like books or films. That means that like those mediums, we now judge each entry mostly by the quality of the storytelling, rather than relitigating the value of this medium over and over again. Either you're fine with a stylized visual novel with occasional choices for flavor, or you aren't, and what's left is how much the subject interests you.

So it shouldn't come as a surprise that Telltale has started to pursue notable franchises like Minecraft, Batman, and now, Guardians of the Galaxy. The B-tier Marvel comic was given a considerable signal-boost under the stylish film direction of James Gunn, and Telltale has adapted its telling to match. This isn't meant to be a perfect translation from the Marvel Cinematic Universe–many characters appear more similar to their comic counterparts than the film–but it borrows liberally from the motifs Gunn established, including and especially the worship of nostalgic rock anthems.

Outside of that, this is its own original story. In this continuity, the Guardians have clearly already tangled with Thanos many times before, and one early plot development at least seems to put it far outside the current MCU. Your Guardians confront the Mad Titan in his search for a powerful artifact, and its powers quickly become apparent. Just as the implications of it start to be unveiled, the episode is over, and we get a snappy teaser for the next episode.

Oddly for its unconventional roots, though, Guardians of the Galaxy plays it straight. Despite a development that places this outside the MCU, it lacks the startling punch of Telltale's Batman, and the difficult moral quandaries of The Walking Dead. It's a short, straight-forward story. The Guardians find an artifact, bicker a little over what to do with their success, see the very tip of a new mystery, and then, credits. I remember only one serious moral choice, while the rest of the decision points were just conversation flavoring.

What's strangest is that, by all indications, players will be remaining in the role of Peter Quill throughout all of the episodes. Without spoiling the exact reveal, the checkered history of the various Guardians members gives them each an understandable motive to use the artifact for themselves. No doubt this will come into play throughout the series, but I'd be much more interested to play as Drax, for example, rather than continuing in my role as Peter and only seeing Drax's arguments from the outside. It's strange that a series known for its ensemble cast is so singularly focused. 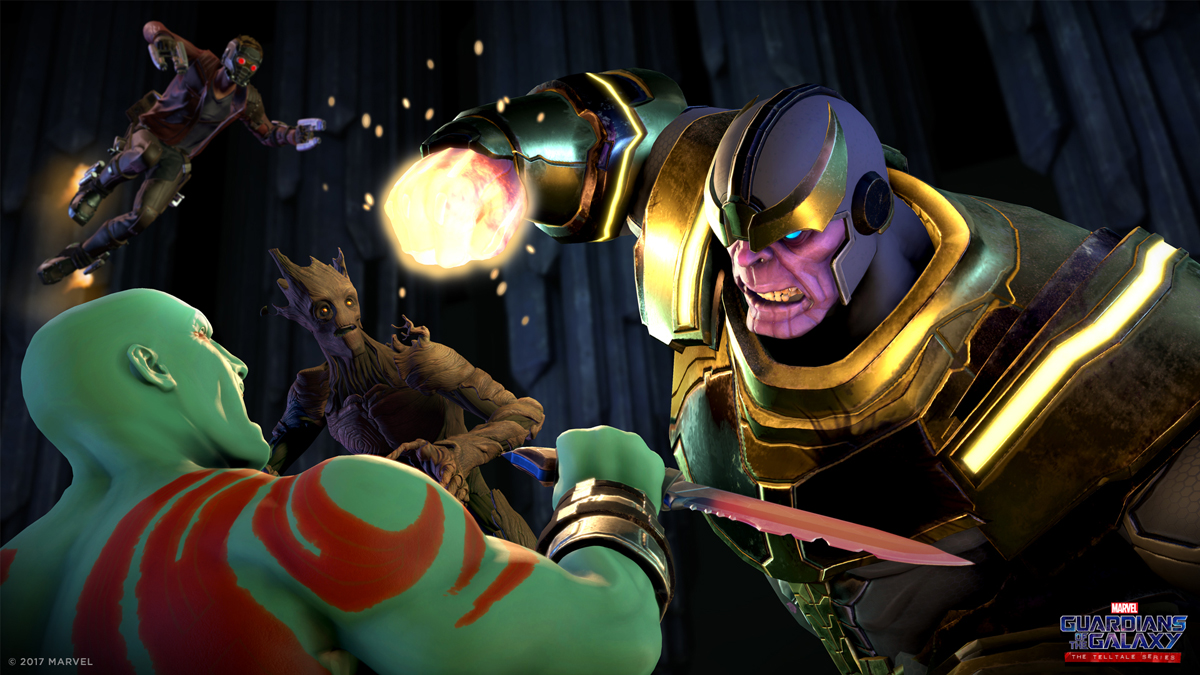 That may be why, after the first episode, I didn't feel as compelled to play the next one. Other Telltale games have ended on a hook that left me craving more. That's the magic of this episodic model. I'm mildly curious to see where Guardians goes next, but I'm not left wishing I could play it right now.

Guardians of the Galaxy does benefit from the experience Telltale has gained. It has the good humor and timing of Borderlands, and feels like another positive step away from some of the stilted moments of earlier ones. The dialogue is snappy and flows a little more naturally this time around, which is vital for a story about a crew of old buddies that react to each other like family.

All that said, I'm left feeling merely fine so far about Guardians of the Galaxy. My affection for the characters will pull me through the remaining episodes whether the plot does or not. If Telltale's structure is a medium, the stories it tells need to stand on their own strength. I'm not sure yet whether or not this one does.

This review-in-progress is based on an Xbox One download code provided by the publisher. Guardians of the Galaxy: A Telltale Series - Tangled Up in Blue is available in digitally now, for $4.99. The game is rated T.