Over eight years and five games, it's fair to say that no piece of Dark Souls content represented to me the proverbial roller coaster of emotions than Dark Souls 3: The Ringed City. I viewed the DLC expansion's launch with mixed emotions. I'm always game for more Dark Souls content, but after this, that's it. Unless Miyazaki-san changes his mind, or unless Sony and Bandai Namco license out their properties—the products of which would likely be viewed as bastard heirs by the fan base—I'll never again get to anticipate exploring a new Souls world.

After my venture through Ringed City, I feel comfortable saying that I enjoyed the ride, but have no desire to get back in line anytime soon. 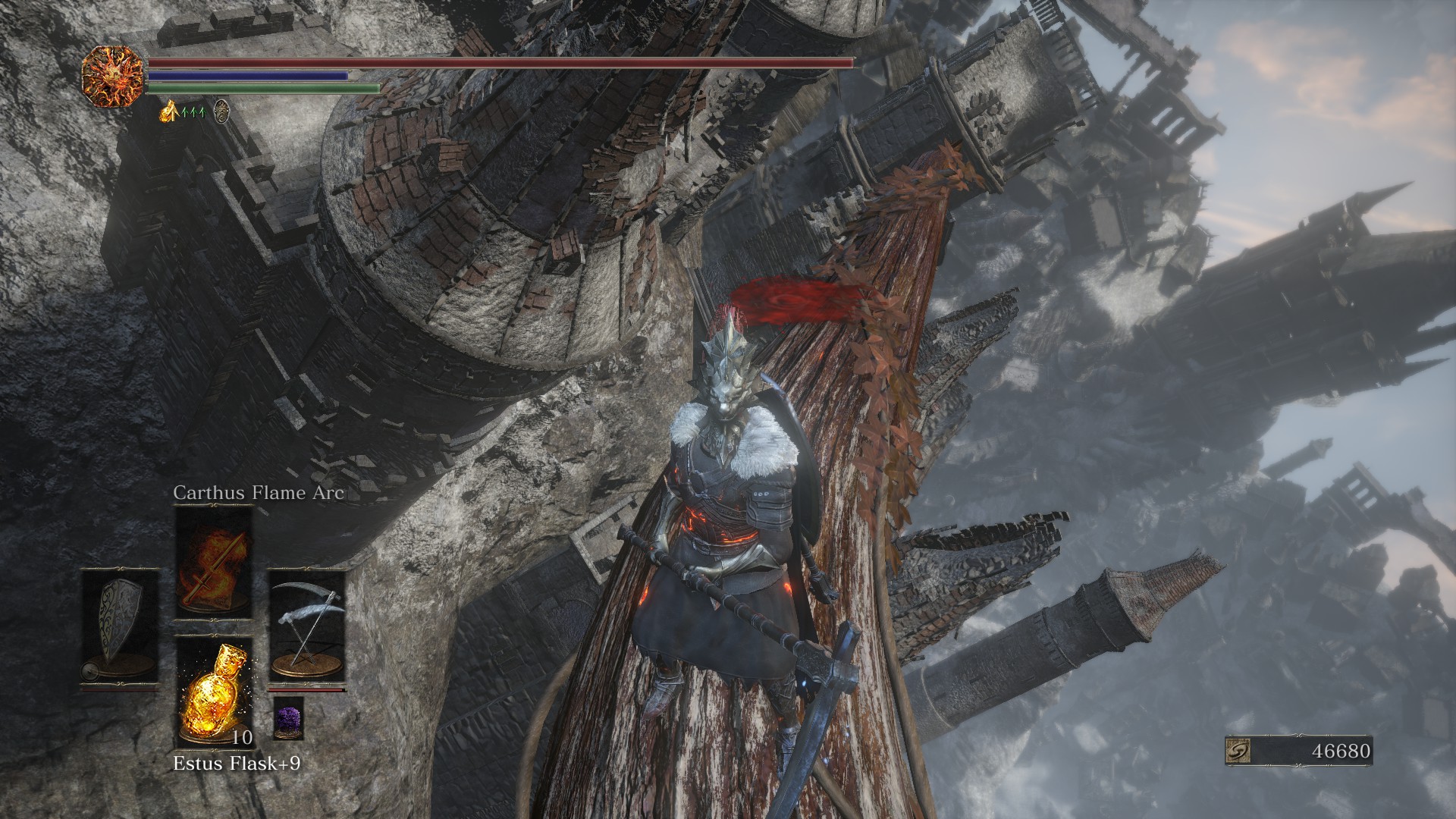 The Ringed City plays with verticality better than any previous SoulsBorne area. Entering the first zone, you progress by dropping down cliffs and ledges onto mounds of ash and following any paths that unravel from there. Ringed City's heights are dizzying. There were times, such as standing at the tip of a narrow outcropping of rock and looking down and out at buildings jutting out from the sides of cliffs, when my stomach did flips.

That vertiginous sensation works well, especially in areas mostly devoid of enemies. Their conspicuous absence reinforces that the terrain is as much your adversary as any twisted monstrosity.

Having said that, The Ringed City's level design fails to impress in other ways. Permanent, developer-wrought messages tell you when and where you can safely fall, but the expansion's reliance on dropping is unintuitive in a series where falling traditionally has been punished. Utilizing it so heavily in this expansion teaches bad habits. When confused as to where I should go and faced with sheer drops on all sides, I assumed the game was teaching me to "take the plunge," as the developer messages say—only, not every surface can be dropped onto safely. Where I could and could not plummet became clear eventually, but I still experienced more moments of confusion and doubt than I'd have liked, especially in a series lauded for encouraging and rewarding exploration.

Finding my way would not be so tricky if not for enemy placement in many regions. FromSoftware designed The Ringed City as late-game content, and recommends that players wait to venture forth (or rather, down) until they're around level 125. Fine by me, except the developer's definition of "difficult" in Dark Souls 3 often meant mob after mob of enemies. Ringed City is no different, and often worse. 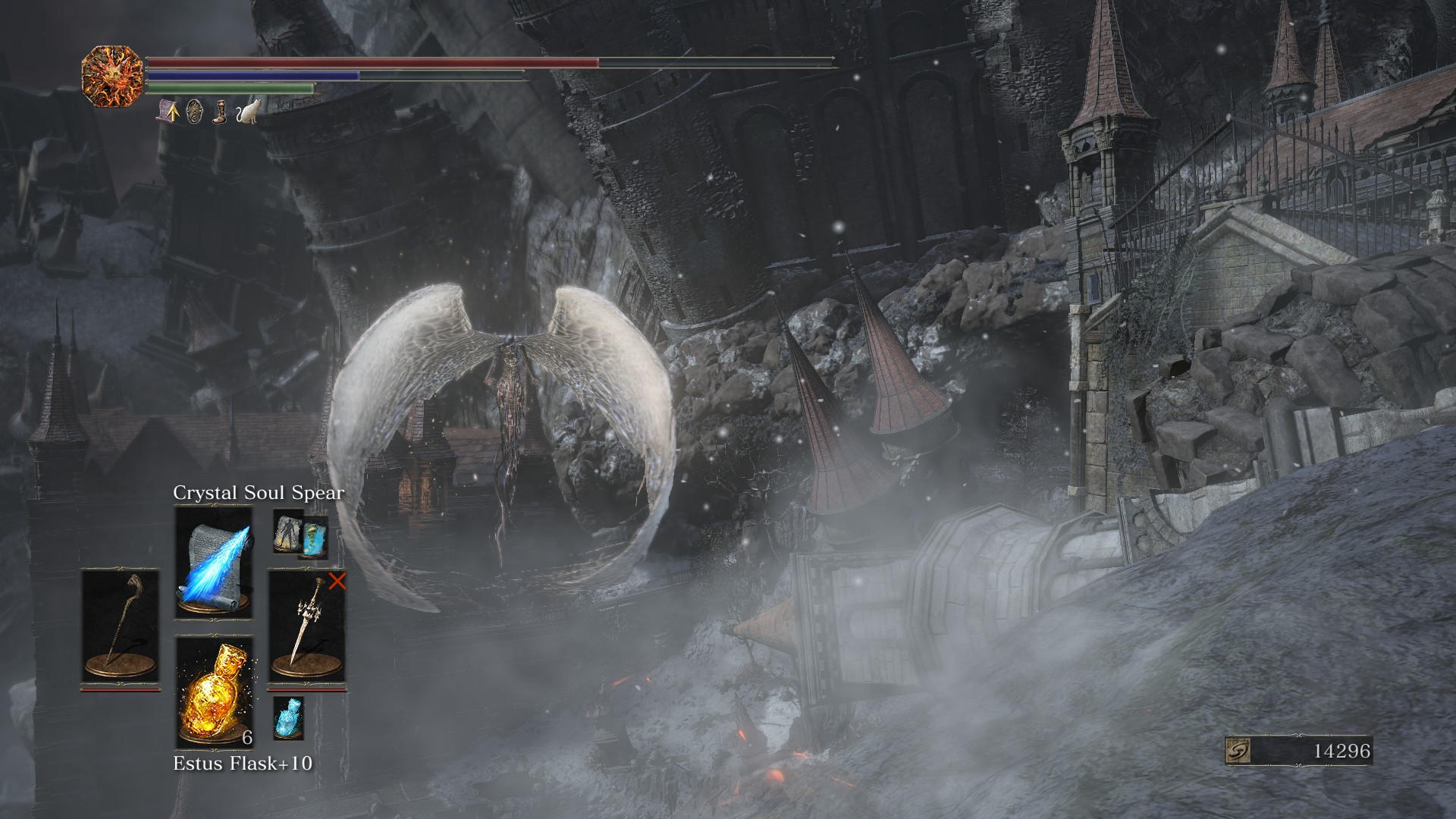 The most egregious offenders are angels, winged enemies who hover at a distance and rain endless barrages of golden spears down on you. Angels respawn when you kill them. They are linked to certain other enemies stashed away around the level, and only by killing those monsters can you prevent their charges from appearing. Until then, you've got to deal with angels pelting you—while trying to find a path, and steering clear of swarms of smaller but no less ferocious enemies biting at your ankles.

Angels aren't all bad. Until you can kill them, you have to avoid them. You do that by dashing for cover behind boulders, or cabins, or other obstacles until they lose sight of you, at which time you want to leave your hiding place and race to another safe spot because your celestial foes open fire within a heartbeat of you showing your ugly, undead curse-addled mug. These stealth sections add a layer of tension to the proceedings, compounded by the angel's chilling croaks of vexation as they search for you.

Angels comprise one patch on Ringed City's quilt of ideas, most of which we've already seen. One area is a retread of Dark Souls 2's Earthen Peak region, much like Ashes of Ariandel and Irithyll of the Boreal Valley are homages or returns to areas from the original Dark Souls. You'll venture through yet another poisonous swamp, climb up and down gigantic, winding tree roots, explore more castles, cross swords with more knights.

Dark Souls 3 was chockfull of beautiful yet derivative zones—as if building the game using Bloodborne's engine was an excuse for Miyazaki to go back and remake old areas. The Ringed City is gorgeous and haunting, but did little to disabuse me of the "been there, seen that" feeling that pervaded its base game. Credit where credit is due: The Ringed City shines in other areas. There are four bosses for you fight, and they're some of the best and most challenging of the series. NPCs play a bigger role, including a final boss that provides some closure regarding Dark Souls' pygmy.

Dark Souls 3: The Ringed City is fine–just fine. I wish I could give higher praise to what is, for now, a coda of both the Dark Souls trilogy and the SoulsBorne franchise, but "fine" is as good as it got for me. The Ringed City's new ideas end almost as soon as they begin, and the rest take you over familiar ground. How eager you are for more of the same will determine how much enjoyment you get out of this bite-sized expansion.