With all the trailers coming out to hype various games, it is our duty as writers to come up with something to say that might entice you to watch these PR and marketing vehicles. In a new Prey trailer showcasing the powers and weapons in the game, an item called the Typhon Lure makes this easy.

The lure apparently makes the aliens, known as Typhons, gather around as if disco music was playing, and raise an arm Travolta-style, prepared to boogie. This of course, makes them easy to kill, especially if you hate John Travolta and disco. 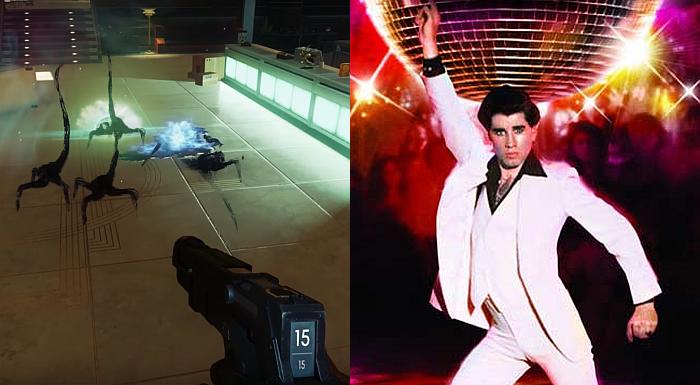 The trailer shows off a bunch of other Typhon powers that protagonist Morgan Yu can acquire, many that are derivative of developer Arkane Studio's other franchise, Dishonored 2. The lure is similar to Emily's ability Mesmerize, Lift Field works like Corvo's Windblast, Phantom Shift is Emily's Doppleganger, and even the Typhons look a bit like Emily when she is shadow walking. Maybe we have a merging of the franchises where the Typhon are descendants of the Outsider who have been corrupted by power. Some of the character designs do have a distinct DH2 flavor.

That's not to say that Prey won't be a fun game, given how much play Dishonored 2 has gotten, but the overlap of art and animations is a bit glaring.

Check it out for yourself. Prey will launch on PC, Xbox One and PlayStation 4 on May 5.