Orcs stalk Frank Arnot through his dreams. No matter where he turns, no matter how hard and far his feet pound through dungeon corridors, they cut him off at every pass—towering beasts, tusks the length of his hand protruding from their jaws, their eyes filmed by a red haze of bloodlust.

At least, that's how he imagines the monsters of the classic roguelike games that inspired Brut@l.

Arnot grew up playing NetHack and Rogue, the latter widely credited as the founding father of roguelikes—RPGs where dungeons, monsters, and magical weapons are rendered out of ASCII text characters like letters, numbers, and punctuation marks.

"When I played those games I didn't see an '@' symbol moving across the screen and colliding with the letter 'O,'" said Arnot, designer at Stormcloud Games. "Instead, I imagined a hero creeping through a dank dungeon and battling Orcs. With Brut@l I wanted to try express what was inside my imagination—to make the player feel like they had fallen through the screen and were now inside this 3D world filled with monsters and treasure, all made entirely from ASCII."

Brut@l is the latest title from Stormcloud Games. Founded in Dundee, Scotland, in 2012, the studio's co-founders have worked together for over two decades. They got their start at DMA Design—creators of Grand Theft Auto and now a subsidiary of Rockstar Games—and eventually splintered off to open Stormcloud. To bring their dreams to life, they took a leap of faith together.

"I'd reached a point in my career where I simply wanted to work on projects that truly interested me, and the others guys where crazy enough to say, 'Okay we'll do it, too,'" Arnot said.

Despite their camaraderie in business, Stormcloud's principals were divided over the concept of Brut@l, a real-time action game fused with roguelike trappings. "In fact, when I first suggested the idea of Brut@l to the rest of the team they thought it was a terrible idea and that I was crazy," Arnot remembered. "It was only as the project progressed and we gained external validation of the idea that the team started to think maybe I wasn't that crazy after all."

One by one the rest of the team got hooked on Brogue, a roguelike clone by Brian Walker that favors accessibility over the genre's characteristically obtuse underpinnings. Slowly, they came over to Arnot's way of thinking. Their goal became to design a roguelike-like, a game that integrates elements of text-only games without chaining themselves to dogma.

Brut@l straddles the fence between past and present by rendering the game world from 3D models peppered with ASCII characteristics. Dungeons, for instance, exhibit floor tiles made from periods and walls hewn from dashes.

"ASCII letters are the building blocks of Brut@l's entire world, therefore it made sense to us that they should serve a gameplay function and not just be an aesthetic consideration only," Arnot explained.

Every aspect of Brut@l melds ASCII and polygons. The four playable character classes—Warrior, Amazon, Mage, and Ranger—consist of archetypical silhouettes combined with text such as the "@" sign, traditionally emblematic of the player's avatar, branded against their chests.

"During the game's conception, we knew that we wanted the characters to be made of ASCII letters," explained lead artist Patrick McGovern. "We looked at different ways of achieving this, whilst still making them graphically readable. Once we settled the best use of the ASCII for in-game view, we basically designed the characters as standard fantasy tropes, but with the ASCII added to highlight features rather than describe them entirely." 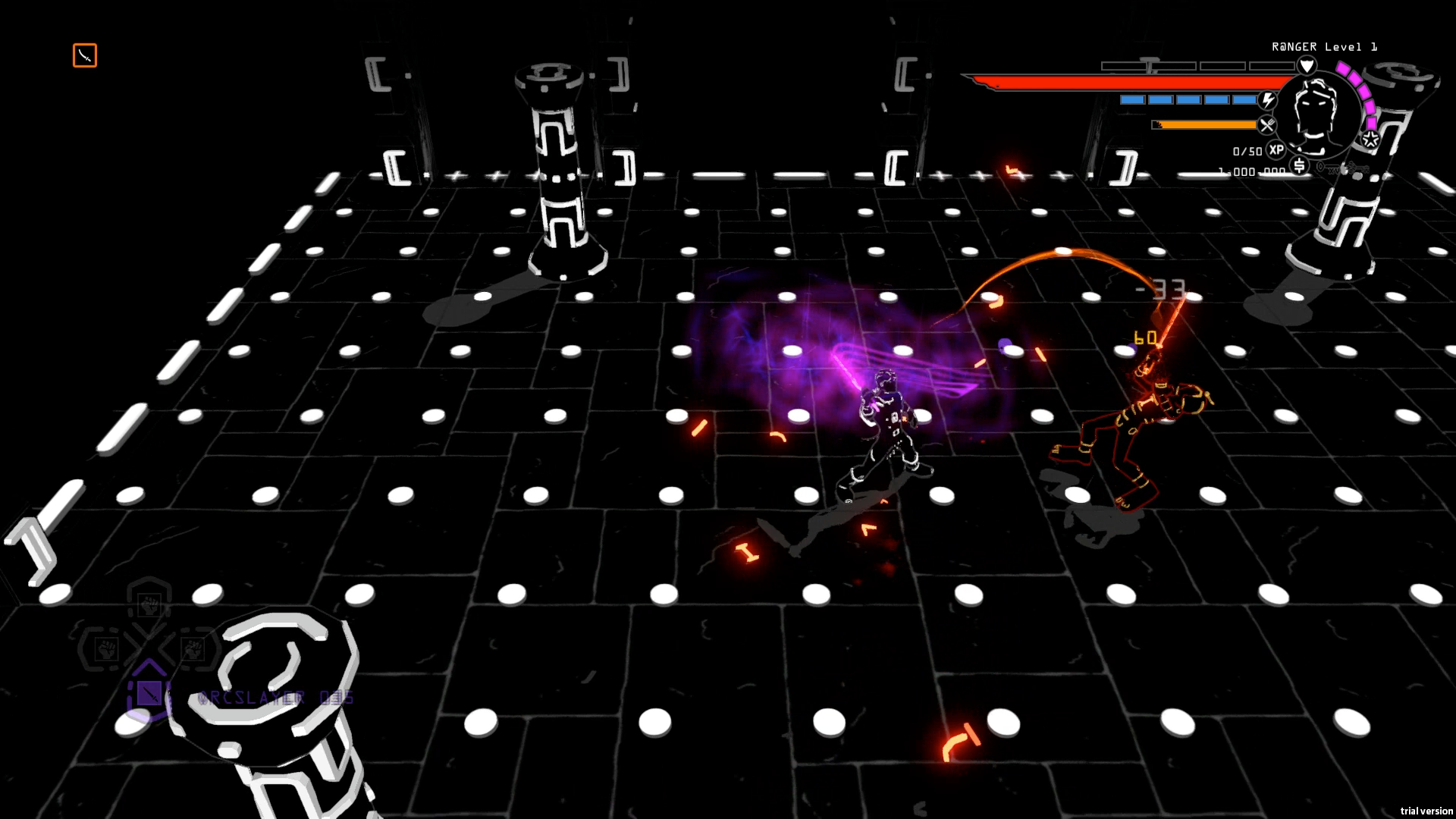 Brut@l features a blend of contemporary and classic visuals.

Brut@l's juxtaposition of black-and-white environments and colorful actors is striking. However, that same blend can also cause characters to get lost in the jumble of level architecture. "Any monochromatic game will have these issues," McGovern admitted, "but the original idea was to re-imagine the classic ASCII rogue-likes come to life in 3D. Colored environments or textures would lose that connection to the original titles. We felt the black-and-white look was an integral part of the attraction and homage, while aware of the problems it might bring."

Modern design sensibilities extends to gameplay. Roguelikes created in the vein of Angband and Moria are turn-based, contributing to a more methodical pace. Brut@l adopts a top-down view typical of its progenitors, but favors real-time action with a smattering of platforming. The game also supports co-op, whereas the classics were staunchly single-player affairs. Furthermore, roguelikes are notorious for using every key on a keyboard to perform actions. Brut@l strips away that complexity and boils down the brunt of its interactions to jumping and fighting.

"Games like Rogue, NetHack and Angband are still great games today but are probably too hardcore for most people," Arnot said. "We wanted try to make a roguelike that was more accessible to the modern console/PC gamer, something a bit more responsive and forgiving. Hence simple combat, platforming, and our reincarnation mechanic to compensate for the permadeath."

Reincarnation was Brut@l's take on permadeath, short for permanent death. Die once in Rogue or its ilk, and your character is deleted forever. Brut@l gives players a chance to continue exploring with their avatar by sprinkling shrines around dungeons. By investing in them, players acquire extra lives.

Not that Brut@l is a breeze. Enemies swarm players who charge into unexplored territory, and players must perform platforming challenges like hopping over pits to progress.

"We were aiming for something along the lines of simplicity and accessibility of a Lego game," said Arnot, "but with the challenge of a true roguelike. What we ended up with is a game that easy to pick up and play, but very difficult to complete, and totally unforgiving of errors. And we deliberately wanted it that way. We wanted it to be a badge of honor to say you completed Brut@l." 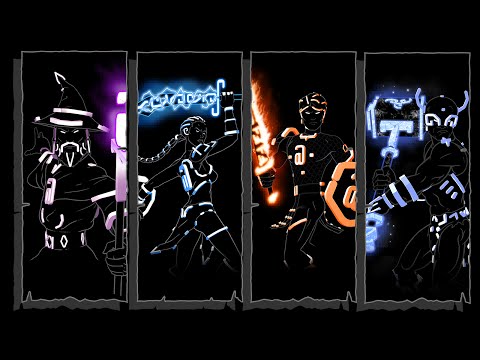 As is only proper in a roguelike game, the challenges players face in each dungeon are determined by algorithms. "The procedural dungeon generator was engineered such that it tries to provide a balanced but ever increasing challenge as you progress down through the floors of the dungeon," explained lead programmer Andrew West.

Dungeons expand as you descend from floor to floor, growing larger and more dangerous. More traps and tougher monsters inhabit lower floors. With greater risks come greater rewards. "The generator algorithm also aim to introduce new features as you progress," West continued, "so that you encounter new experiences as you get deeper. So as you descend, you will start to encounter enchanted doors, tougher monsters, and secret hidden chambers."

Brut@l puts a spin on loot. First, West's dungeon-generation formulas crunch numbers to construct a level's floor plan. Then the algorithm furnishes dungeons with common objects like tables and chairs, as well as traps, enemies, and treasures. Among those goodies are codices, recipes that players follow to craft weapons; and alphabet letters—ingredients used to concoct items by following the codices, and another homage to games of yore.

"The procedural generator guarantees that you will be able to find at least one weapon codex and all of the letters to craft that weapon on the very first level of every play through," West said. "However, some of the items can be quite well hidden, so you'll need to explore each levels thoroughly to ensure that you find all them all."

Brut@l looks out for the two most common types of RPG players: Those who clear every room and kill every enemy to earn every experience point and find every treasure, and those who prefer to forge ahead. "At the end of each level we do tell the player what they missed on that level, and we carry any missed letters forward to subsequent levels, so players do get multiple chances to collect letters," West said.

No matter which class they choose at the outset, players will receive ample opportunity to wield the game's best spells and weapons. Taking a page out of the original Diablo's playbook, Brut@l's character classes represent starting points rather than a set path. Leveling up invites opportunities to learn skills, and every class can learn every skill.

While some fans may feel that this decision lowers Brut@l's replay value, Stormcloud thought it more important to keep players on equal footing. "That was a deliberate decision," Arnot said of the game's overlap between class skills. "We wanted all the classed to converge to a single point. It was less about the destination and more about the journey of unlocking those skills from different starting points. Would we have liked to have more differentiating skills between classes? Sure, but we were limited through time and budget in terms of what we could achieve." 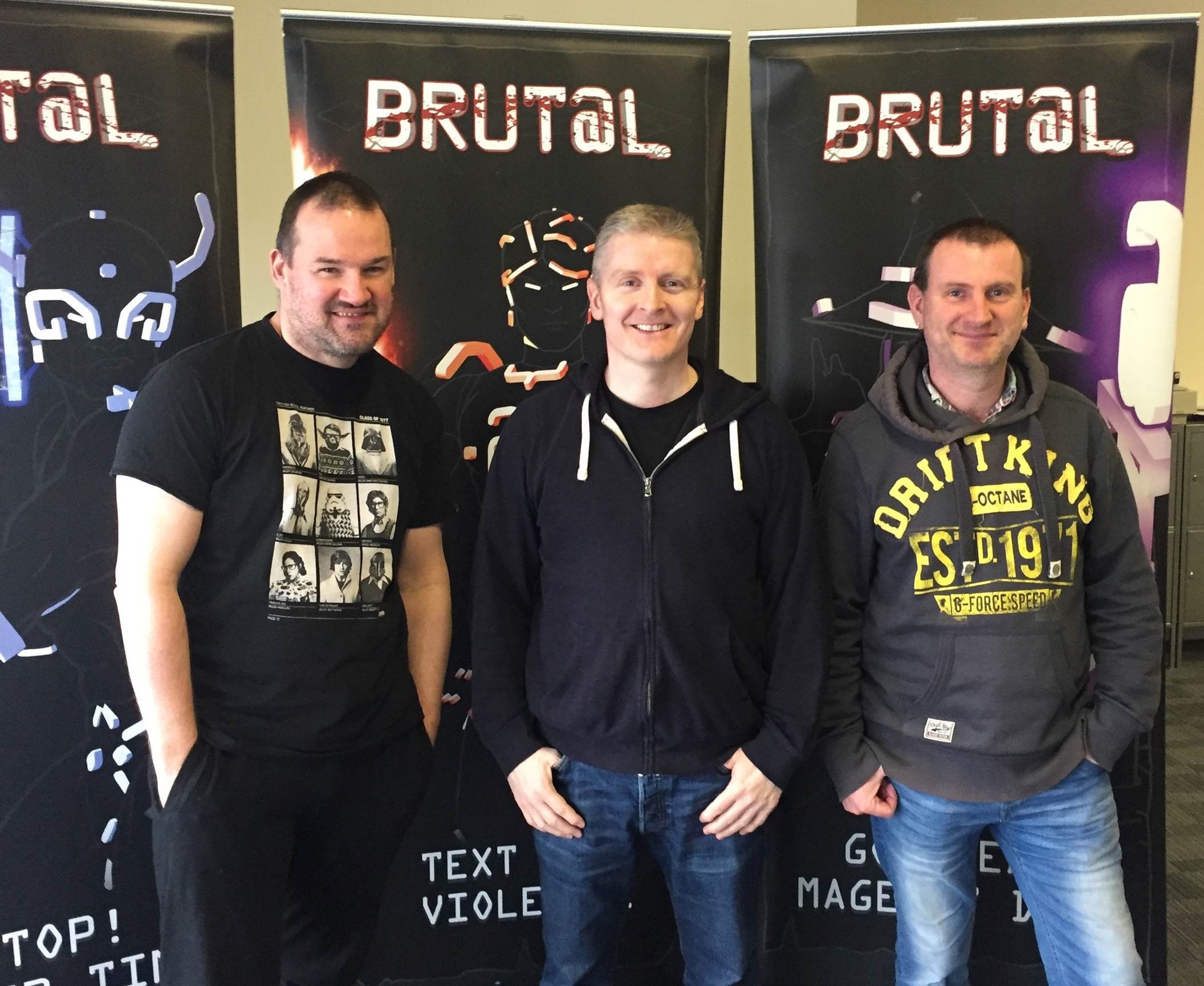 What Stormcloud Games achieved with its small team and budget was believed to be impossible: a roguelike experience that should appeal to long-time fans looking for an artistic blend of new and old, yet inviting enough that fans deterred by the roguelike genre's inscrutable interfaces and punishing difficulty will enjoy.

"Ask anyone who makes games and when they look back at their finished game they'll all say something similar: All I see is the rough edges, the missing features, the mistakes, the things that we didn't get quite right," said Arnot. "I'm super-proud of Brut@l, and the entire dev team. We created a solid little title. A title that dared to do something different, and we did it with a core team of around eight people, a small budget, and a short timeframe."

Stormcloud Games provided Shacknews with a Steam key to play Brut@l in preparation to write this article. Brut@l is available on PC and PS4.