BioWare has teamed up with Cards Against Humanity to create a Mass Effect expansion for the popular game. But don't expect anything family friendly. The cards are all about sex with aliens and boning metal women. We doubt these are the "meaningful" side quests that Mass Effect> Andromeda was aiming for.

The limited-edition 14-card pack is now on sale for only $1, and the site jokes that the pack was created in the hope that "they would let us play the new Mass Effect game early. That did not happen, but here we are anyway."

In actuality, the expansion actually sprung from a meeting a few years ago at the San Diego ComicCon between the CAH team and the developer. The two sides were so excited about the prospect that work began on the cards later that same evening. More than 700 cards were created, but only 14 made the final cut.

“Whenever we’d look at the list of cards their team preferred, it was only cards about fucking,” CAH's Trin Garritano told Polygon. “We had to push through a few non-sex cards just to widen the appeal of the deck. It was an incredible problem to have and I am still absolutely tickled by this.” 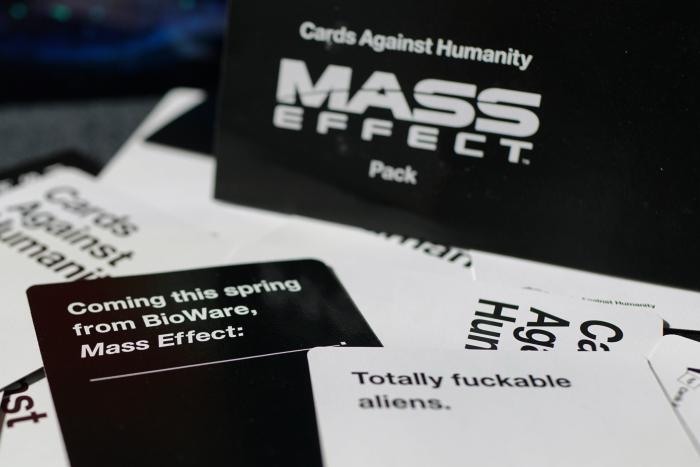