Resident Evil 7: How to Get Your First Gun

Resident Evil 7’s Baker Estate is a dangerous place, and you’ll want to get your hands on a gun as soon as possible. Firearms are a big part of RE7’s gameplay, but you’ll only stumble upon them every once in awhile. Usually, you’ll get a weapon after a puzzle, or when facing a new enemy, but your first gun in Resident Evil 7 is not hard to get. However, there are actually two separate times during the story that you’ll technically “get your first gun,” so we’ll go over both in this guide.

We’ll try to avoid spoilers in this guide, but it’s necessary sometimes to reference story events for context. If you want a spoiler-free experience with Resident Evil 7, now’s the time to turn back.

Getting Your First Gun for the First Time 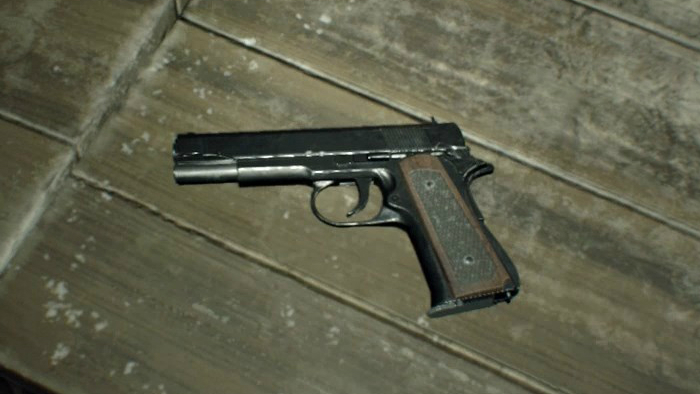 As stated above, you’ll spend the first 30-45 minutes of Resident Evil 7: Biohazard without access to a firearm. It’s easy to think you might have missed something along the way, but it’s all by design. You’ll get your first gun after your first fight with Mia. You’ll climb to the second floor of the house, and in a side room, you’ll find an M19 Handgun.

The first pistol in the game resembles an M1911 series pistol and has a 7-Round magazine. However, since it’s chambered in 9mm Parabellum, it’s closer to a Browning Hi-Power in performance. Unfortunately, you won’t get to keep your new M19 Handgun very long, so don’t get too attached to it. You will get a chance to use it again later in the game, and it’s the more powerful of the two 9mm pistols.

Getting a More Permanent Firearm 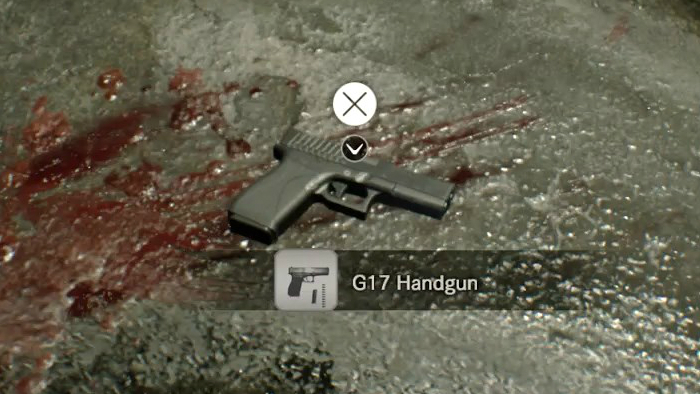 Even though the last section covered getting your first gun in Resident Evil 7, you didn’t actually get to keep it. You’ll get a permanent handgun not too long after you lose your first, though. Soon after you lose your first gun, you’ll get a chance to meet the Bakers. A chance arrival of a Sheriff’s Deputy allows you the opportunity to escape, and you’ll soon meet the Deputy Sheriff at a window. He’ll ask you to come to the garage to speak with him. Once you arrive there, circumstances end up with you obtaining the Deputy’s firearm: the G17 Handgun.

The G17 Handgun is an obvious Glock 17 clone, with a 10-Round magazine. It doesn’t have quite the power of the M19 Handgun, but the increased magazine capacity helps make up for it. The G17 will be a mainstay of your arsenal throughout Resident Evil 7, and handgun ammo is the most plentiful type found in the game.

For more information on all weapons in RE7, see our Resident Evil 7 weapons guide. If you’re wondering how best to heal, check out our Healing and First Aid guide. For more Resident Evil 7: Biohazard guides and walkthroughs take a look at our guide content hub.