Developer Naughty Dog confirmed a co-op Survival mode and other features to be released in Uncharted 4's first free expansion pack, due for release tomorrow, December 14.

Announcements were made during a livestream broadcast earlier today. In Survival, players work together to survive 50 waves of enemies divided across 10 stages, five waves per stage. You'll be able to play Survival in multiple sittings—and you might have to, because the developers indicated that some stages will take "hours" to finish.

If slaughtering waves of enemies isn't your thing, you can tweak Survival's objectives to Marked Man (kill a single target), Treasure Race (find and acquire goodies scattered across the map), face off against ghosts of bosses from the main game, and more.

As for multiplayer, you'll receive 10 new weapons and as many extra levels, plus new warrior and biker skins, a King of the Hill mode, and Prison and Trainwreck maps.

Uncharted 4's free update will weigh in at around 3 GB and is due sometime tomorrow.

Naughty Dog also touched on future updates, including a Hardcore mode that will be added in 2017. Take a look at the developer's roadmap for further details on what future Uncharted 4 add-ons will add on.

The developer earned goodwill from fans when it announced that all expansions for Uncharted 4 would be released free of charge in order to avoid splitting the community into haves and have-nots.

"Right off the bat, we want to highlight that all future maps and modes will be included with Uncharted 4 at no additional cost, and all vanity and gameplay in-game store items will be unlockable through gameplay," wrote lead designer Robert Cogburn in a PlayStation blog earlier this year. 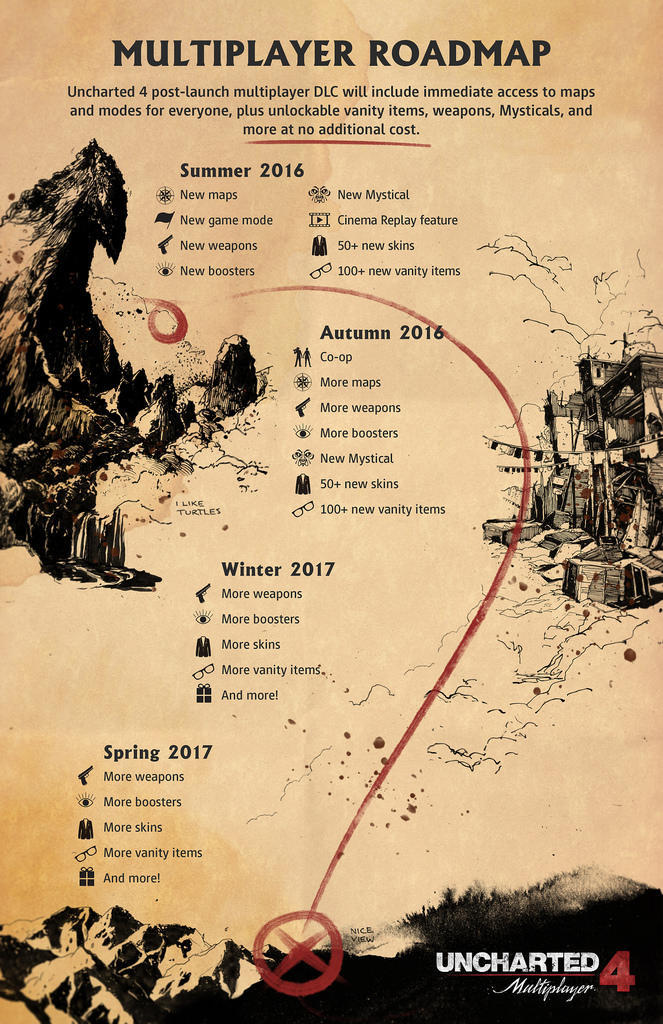