Charles Martinet, a voice actor who has imbued Mario with his characterized Italian persona since Super Mario 64, was credited in IMDB listings for both Super Mario Galaxy 3 and Super Mario Sunshine HD earlier today.

Segment Next spotted the listings before they were removed. 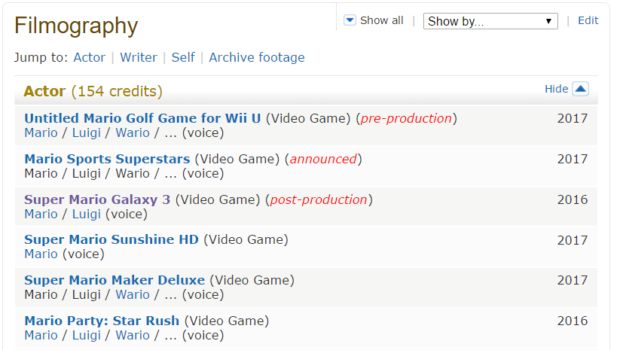 According to Martinet's IMDB page, Super Mario Galaxy 3 was in post-production as of this year. Super Mario Sunshine HD, a gussied-up port of the 2002 GameCube title, was listed for a 2017 release.

An HD port would be just the right sort of filler content to pad the Switch's launch window while Nintendo's internal dev teams concentrate resources on a brand-new Mario adventure—Super Mario Galaxy 3, for instance.

Nintendo's announce trailer for the Switch showed footage of Mario running through an expansive town square-type area. The footage did not come from any Mario game currently available, leading to speculation that it's a new title. 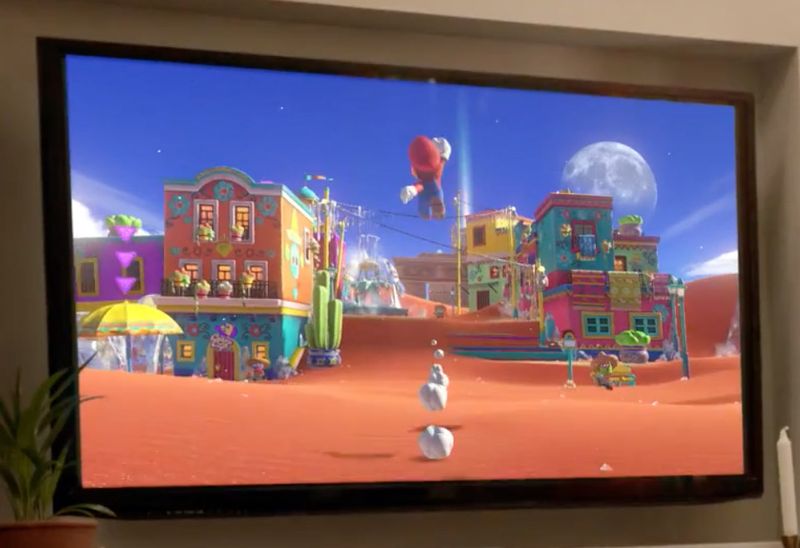 Miyamoto did confirm shortly after E3 that Nintendo was working on Mario and Pokémon games for the Switch—then referred to by its codename, NX—that would be ready within six months of the console's launch in March 2017.

Another mysterious listing on Martinet's IMDB page, Untitled Mario Golf Game for Wii U, was also on deck for 2017. That might still be the case, but given that Nintendo confirmed that the commercially unsuccessful Wii U will cease production soon, it seems just as likely that the golf game could make the jump to Switch.

Mum's the word on more Switch details until January 13, at which time Nintendo will divulge details like a firm price point and an early look at launch titles. Earlier today, Toys R Us accidentally published an online listing for the Switch, priced at $250. The listing has been deleted.

Craddock's Corner: I'd love to see Super Mario Sunshine on a modern Nintendo system; it's criminally underrated, and one of the finest examples of Mario fundamentals melded with new ideas, namely the FLUDD cannon. I'm not as keen on the idea of a third Mario Galaxy, though. I'm a traditionalist when it comes to Mario games: I like the idea of new Nintendo platforms introducing a new Mario mini series, often tailored to the platform's hardware or controller. Super Mario World on SNES, Super Mario 64 on N64, Sunshine on GameCube, Galaxy on Wii, and so on.

Mario Galaxy was suited to the Wii. Let it stay there, and give us something better suited to Switch.