While we've known for a bit now that Batman: Arkham VR would be a PlayStation VR exclusive, it also looks like Resident Evil will be joining the VR exclusive club as well. While it, too, will be a timed exclusive, according to an advertisement found on Facebook, and later shared to reddit Capcom and Sony have teamed up to bring Resident Evil 7 VR to PlayStation VR for a 12 month exclusivity cycle. You can check out the advertisement below. 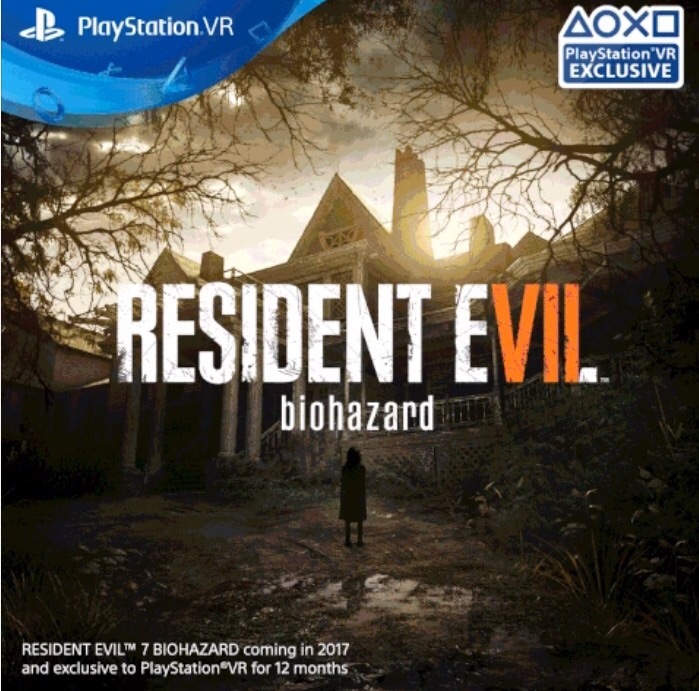 This kind of deal is what makes PlayStation VR such a big hitter for Sony. Not only does the headset offer console players an affordable way to buy into VR, while still enjoying their favorite platform of choice, but it also allows Sony to score some heavy hitter exclusives like Resident Evil 7 and Batman: Akhram VR. Sure, these titles will eventually come to PC via the Oculus Rift, HTC Vive, and whatever other headsets happen to crop up between now and then, but users wanting to enjoy these two VR titles when they first release will have to do it with their PlayStation VR headset.

The recent announcement of Resident Evil 7’s 12-month VR exclusivity deal with Sony doesn’t come as a shock. We all knew things like this were bound to happen, but since the game is multi-platform -releasing on PC, PlayStation 4, and Xbox One on January 24, 2017 – fans should expect the title to hit other VR platforms in the future. PlayStation VR will release on the PlayStation 4 on October 13, later this month. Preorders are sold out at this point in time, so all that’s left to do for late adopters is wait it out for the stock to level out in the coming months.

No matter what your stance on exclusivity deals happens to be, this is a huge win for Sony, and their access to the console market has put them in the perfect place to make deals like this (and more) with large publishers who, up until now, were unwilling to risk the VR endeavor. Whether PlayStation VR spurs VR forward into the mainstream direction, however, remains to be seen. All that’s left to do now is wait and watch as the release grows ever closer.

You can pick up your very own PlayStation VR for the PS4 starting October 13. Preorders are already sold out, so expect a pretty hefty wait time before you receive it.