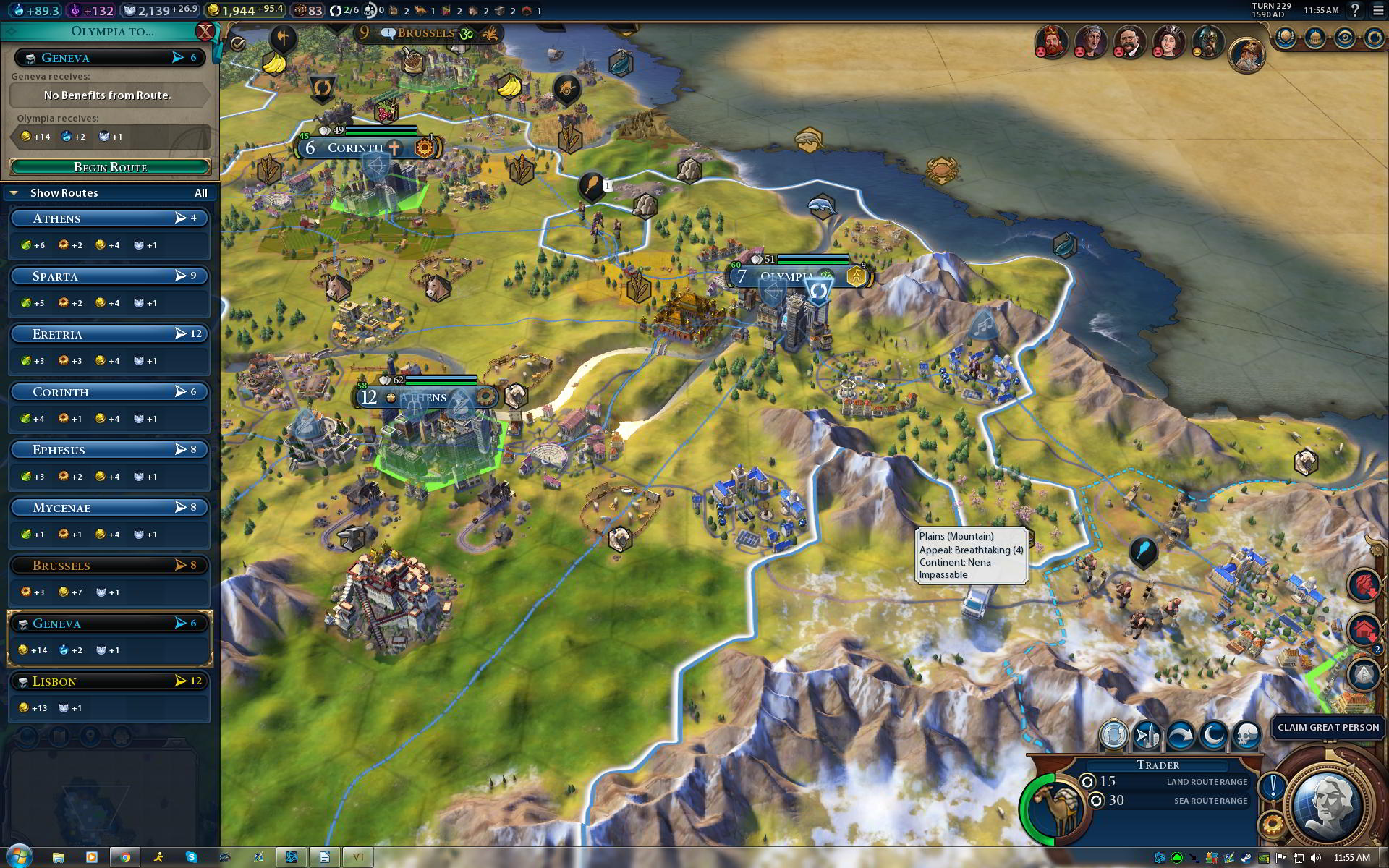 I've been a fan of Civilization games for some time, not only as a turn-based strategy nut, but also as a history buff. I played through Civ 4 too much, but strayed away from Civ 5 because I wasn't a fan of the combat changes. I did play it, but nowhere near the depth I played its predecessor. So given the chance to try Civilization 6, I was hesitant, if only because I know how passionate fans are about the series and the depth that underlies the pretty trappings on the screen, and I wasn't sure if I could bring a nuanced preview worthy of what was being produced.

That said, after playing for about 20 hours and in essence starting from scratch, I'm really enjoying it … at least as much as one can relearning systems while systematically pissing off leaders or going to war against civs that out-tech me or have extra powerful friends.

Prince is the only difficulty level in the preview, so right there I'm at a bit of a disadvantage. I was randomly assigned Greece, with its leader of Pericles. Only 10 leaders were available in the preview build, but eventually 20 will be in the game. I played with the adviser turned on to give me tips and hints, and I usually took the advice. One thing I did find appealing was the move to two distinct development trees, one for tech and one for culture, which gives you a chance for more research. And if you meet certain prerequisites – which are laid out in each advancement – you can cut research time in half for several important abilities.

Early game is pretty basic, with exploration and expansion being key. I tried to find as many tribal villages as I could to get some extra units or tech advancements quickly. Also, with each city I built, I garrisoned a slinger (or more advanced archer after research) to protect them from advancing and sometimes extra aggressive Barbarians.

As a side note, the game really looks great. Unexplored areas have a distinct feel of cartography from the 1600s-1700s. You can also set the game to represent 24-hour days (not in game time obviously, but real life), so as the day begins everything is bright and colorful, and as late afternoon approaches, the colors get warmer. By evening, some units have campfires while waiting for their turns. 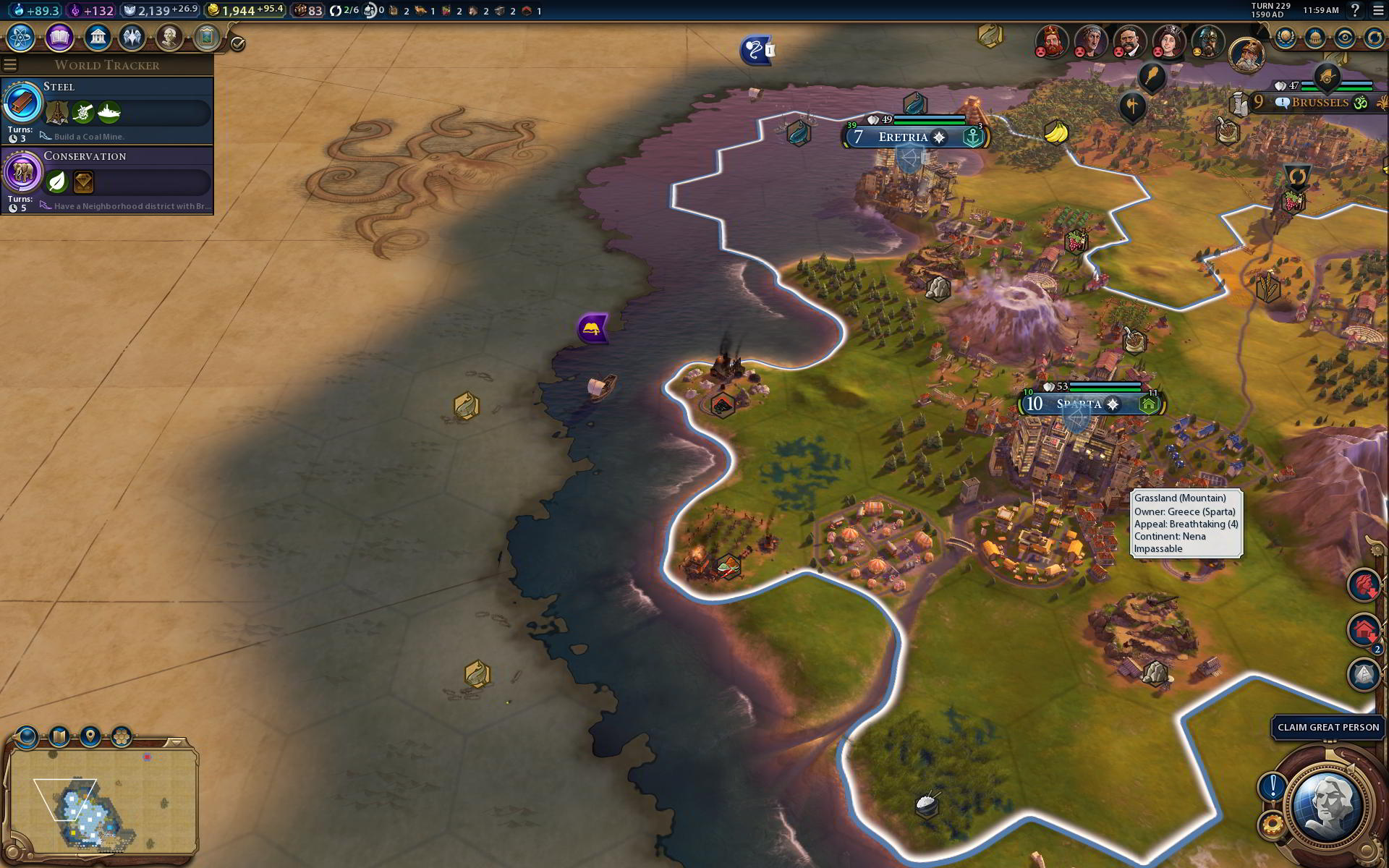 The initial setup of the map is actually quite beneficial in the early going as I find I am in the middle of three city-states, which can provide extra benefits to me if I treat them well, send plenty of envoys and just play nice. Luckily, I get to them before any other leaders, and it isn't long before I am Suzerain of all three and have them defending me and providing me extra production, gold or culture each turn.

I eventually expand to about six cities, monitoring population, housing, and culture. Civ 6 also introduces the concept of districts for cities, which expand the cities beyond the previous one hex of Civ 5. Wonders and districts take up their own hexes, and once a district is built, it unlocks other structures that can be built within that district, giving each city its own distinct urban feel. Other hexes can be improved with farms, mines, camps, stables, etc. with certain hexes offering bonus goods that can be used in trade, such as sheep, rice, sugar, tea, milk and more.

One thing I like to do is build a lot of Wonders, which in turn create a lot of culture and tourism. That approach, which cost me in some aspects with other buildings or units that could have taken shorter time, rewarded me with a substantial lead toward a cultural victory against other civs. I was able to unlock several writers, artists and musicians, and some great scientists as well, providing much needs Great Works and discoveries that pushed me to a greater lead. 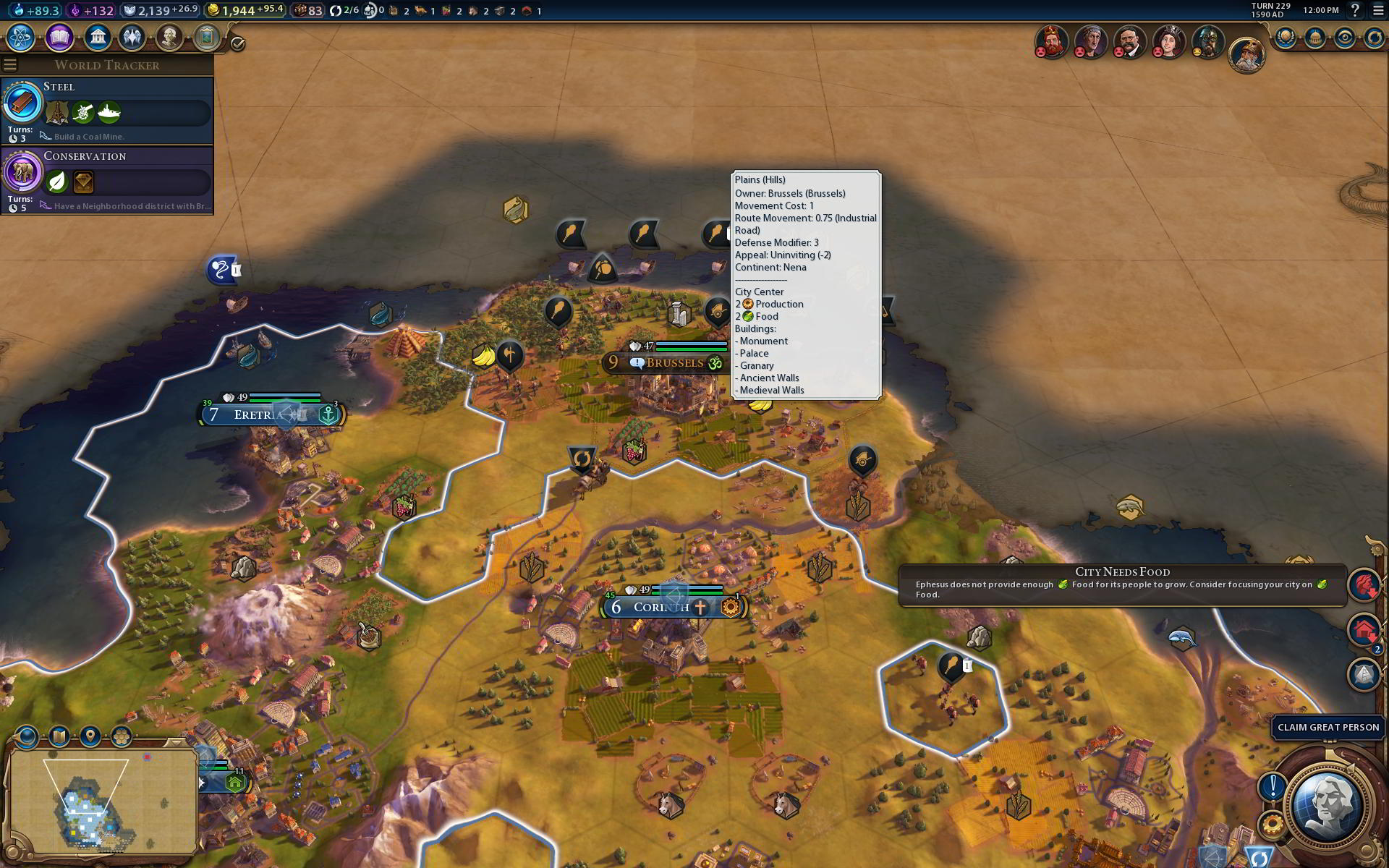 One thing that is a bit frustrating is that it is hard to figure out where I can place the great works. For example, one of great writer's works can be shown at an amphitheater, but they produce two, so you need an amphitheater in two cities to commission both. A great artist produces three works, and an art gallery in a city can handle all three. I have yet to find a place to put the great works of my musician Mozart. And my culture was thriving so much that I had recruited so many writers that I had no place to put their works. Hopefully more play time will let me figure it out.

It took awhile before I finally met a new civilization or two, but the leaders were nicely detailed and voiced. Foreign leaders speak in their native language, and have their own agendas that you must uncover to fully be able to deal with them and their moods. That is something I am still trying to figure out. For instance, almost immediately after I met Julius Caesar, he asked me to join him in a war against Germany. I agreed, and was immediately denounced by several civs as a warmonger, even some of which I had not met yet. What was even more hilarious was that Caesar himself denounced me even though he asked me to join him. A glitch I'm sure, but funny nonetheless.

One thing I totally botched in the game was trying to found my own religion. My culture needed it, but I found that despite building holy districts, shrines, and other holy structures, my cities kept adopting other religions. Again something I'll need to bone up on going forward. 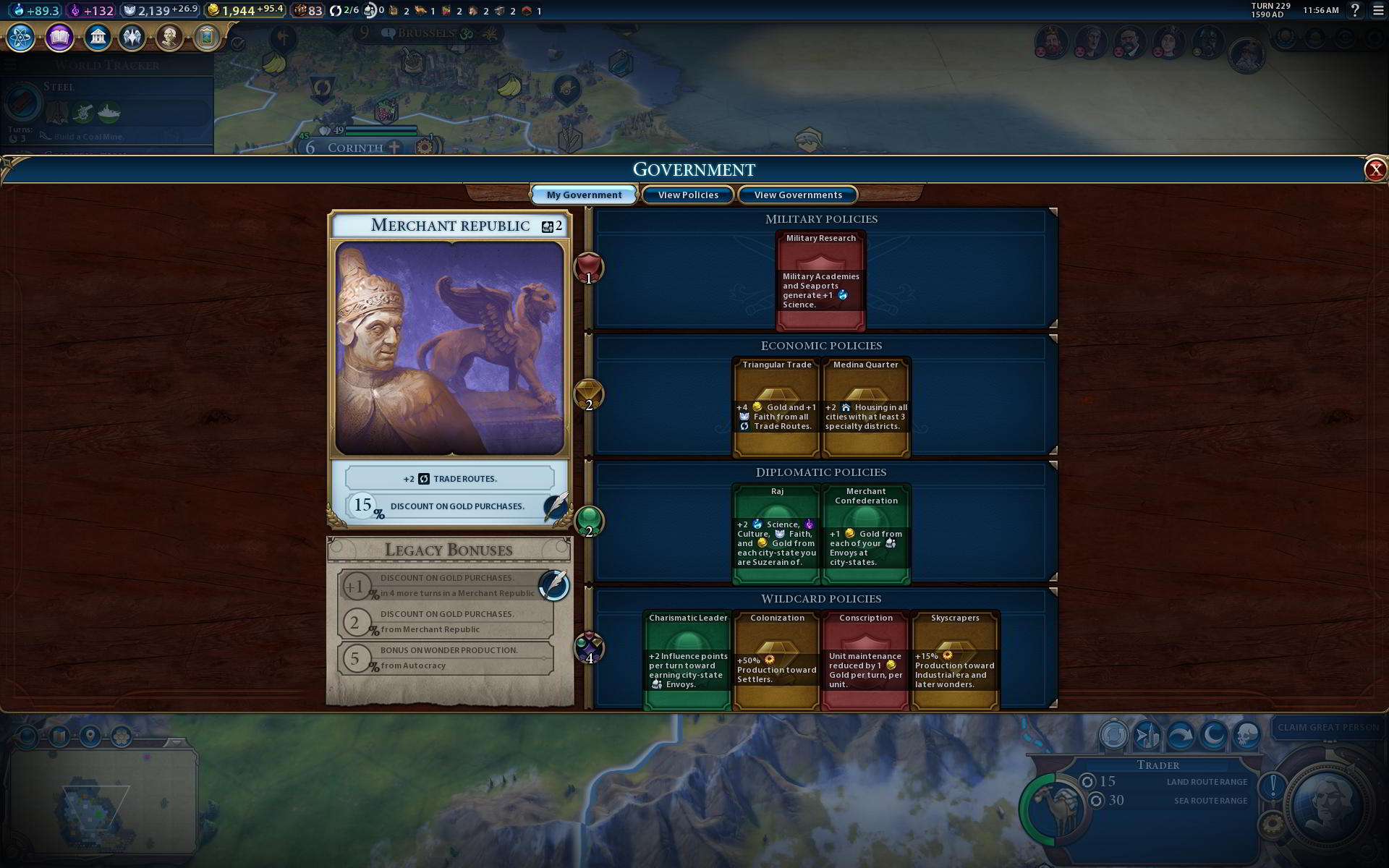 An aspect of the game that was fun to mess around with was the various government types. Each type allows you certain policies that you can enact via cards. There are four types of policy slots where cards can be used: Diplomatic, Military, Economic and a Wild Card that can be from any of the other three. Some types of government will have more military or more economic slots for example to add policies, while others could have more wild card or diplomatic slots. The policies themselves can offer bonuses to military units, extra gold from trade routes, bonus culture form city states … there are literally hundreds of combinations available as different policy cards are unlocked through technological and cultural advancement. More advanced governments will offer more policy slots in different combinations. The whole system is like a mini-game in itself to mix and match policies to give you the best outcome for the type of civ you want to play.

As you can see, I'm no expert at Civ 6, but coming in as a player who loves the series and is rediscovering it, the game is familiar and fun with a bunch of different layers and changes that make it distinctly better than Civ 5, and even more of a throwback to some of the earlier Civ games. I'm looking forward to getting a final build to fully experiment with everything the game has to offer.