The notion of “show, don’t tell” is a difficult one to execute within a narrative. It’s challenging to not reveal your entire hand outright, instead trusting the reader or player to understand the concepts within your story as it progresses. And yet, those stories that are able to balance telling just enough without revealing too much often result in leaving the longest-lasting impression.

Although I only dug through a fifteen minute demo of Unavowed, I was impressed with the way it hides its hand; never revealing too much too quickly and thrusting the player into the world with little more than occasional cues to help guide them toward newer story beats. It was unsettling, jarring, and nothing if not effective. 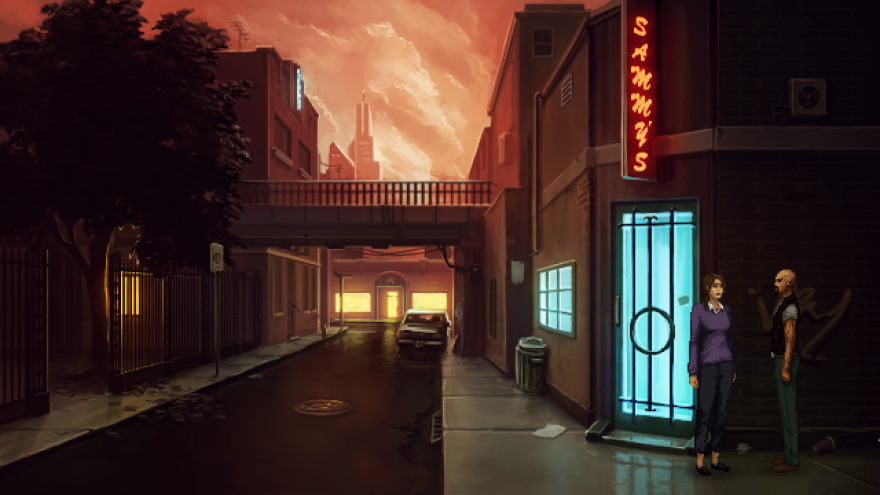 Set in a modern-day world, Unavowed is a world made up of magical realism, wherein people hide in the shadows, fighting unseen demonic threats with their own use of magic and brawn. The start of the demo sees your character--either a man or a woman--on a rainy rooftop at night, being held back by a sword-wielding woman while a man looking like John Constantine asks you to remember key information about yourself while accusing an unseen demon of possession of your form.

Flash back to six weeks earlier, where you stand in the depths of the Bronx, at the door of the bar where you work. A friend approaches, asking you to go inside and check on his brother, who has apparently lost his cool and has been making a scene inside the bar.

This is where the demo initially shocked me and played one of its major hands. Unavowed is not in any way afraid to “go there.” Once you enter the bathroom where the brother has holed up, you find a desperate man holding a gun to his head, screaming about ghosts and voices. Eventually talk him down from committing suicide, and you’ll take the gun and a book he’s holding. Once you grab the book, an eerie white vapor is absorbed into your character’s body, and you immediately take the gun and hold it to the man’s head, pulling the trigger without hesitation before entering the main room and firing another round into your boss’ head. There’s little to no fanfare about it, and the chilling effect of the act is felt immediately. 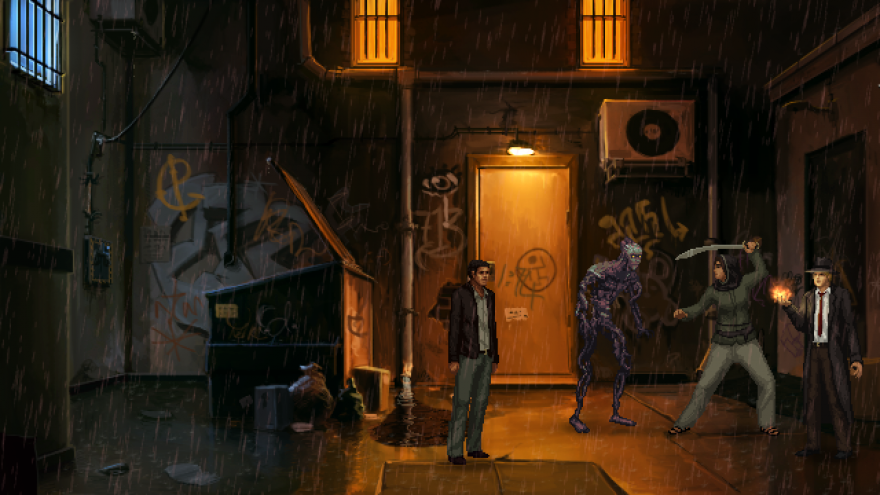 The Unavowed is edgy, but not in a faux, middle-school “mature” way. It has something to say about humanity and control, and it’s not afraid to spill some blood and tackle some very sensitive themes in order to do so.

It’s also an adventure game in a classic point and click style, but not overtly convoluted in its puzzle solutions. One of the largest challenged the main character to kill a demon creature who had transported in without announcement. Using live corroded wires and storm drains, the puzzle is solved by electrocuting the demon without being caught.

The urban fantasy premise works nicely, and the grim edge makes Unavowed feel uniquely inspired, borrowing ideas from Supernatural and Buffy the Vampire Slayer to create a compelling and engrossing story about conquering demons and cleansing out the flaws in our souls.

Unavowed is targeting an early 2017 release on PC, Mac, and Linux.