The Alienware Alpha debuted back in late 2014, and at the time, I was completely enamoured by the little PC that could because it allowed me to bring all of my PC games into my living room without having a large, clunky desktop ruining the feng shui of the room. While the original Alpha was able to handle a large variety of smaller releases, such as Duck Game, Fez, and other smaller indie titles, it struggled to compete with the current console generation as many newer AAA games didn’t perform as well. This lead me to use my Alpha as a streaming device when I needed to play beefier games from my office PC.

After a year and a half of the original Alpha being available for sale, as well as a Steam Machine version releasing back in November 2015, Alienware is ready to unveil the latest iteration of its Alpha, called the Alienware Alpha R2. I not only spent some time with the Alpha R2 at a media event held in New York City back in April, but I was also invited to to welcome the device into my home for over a week. After getting to know the R2 a little better, I can tell you that I’m amazed Alienware was able to fit so much within the small structure of the Alpha, which includes an NVIDIA GeForce GTX 960 GPU, an Intel Core i7 6700T processor, and is now future proof with the inclusion of a port for its Graphics Amplifier.

The Alienware Alpha continues to be a console’s worst nightmare, now more than ever.

A Good Thing in a Small Package

If you’re familiar with the original Alpha, you’ll be happy to know its size and layout have largely been left unchanged. It’s still about the size of the Nintendo Wii (3” x 8” x 8”) and weighs approximately 4.4lbs. The layout of its ports have also been left unchanged, although there are some improvements in the R2. Its front USB ports are now USB 3.0 and there’s now a Graphics Amplifier port in the rear of the device. Outside of those two major changes, you can still expect two USB 3.0 ports located at its rear, a hidden USB 2.0 port underneath, an HDMI-In and HDMI-Out 2.0 port, an optical audio out port, and an RJ45 GbE port.

The majority of the Alpha R2’s changes have been made under the hood as consumers now have the option to include either an NVIDIA GeForce GTX 960 GPU with 4GB DDR5 or an AMD Radeon R9 M470X GPU with 2GB DDR5. This is a huge step up from the NVIDIA GTX 860M discrete-class GPU that was included in all of the original Alpha PCs. Alienware is also offering several options for processors, all of which are 6th Gen Intel Core i Family CPUs, options for SSDs up to 1TB, and supports up to 16GB of DDR4 2133MHz RAM. With all of these improvements, Alienware claims the R2 offers a 60% increase in graphics performance on average when compared to the original Alpha. 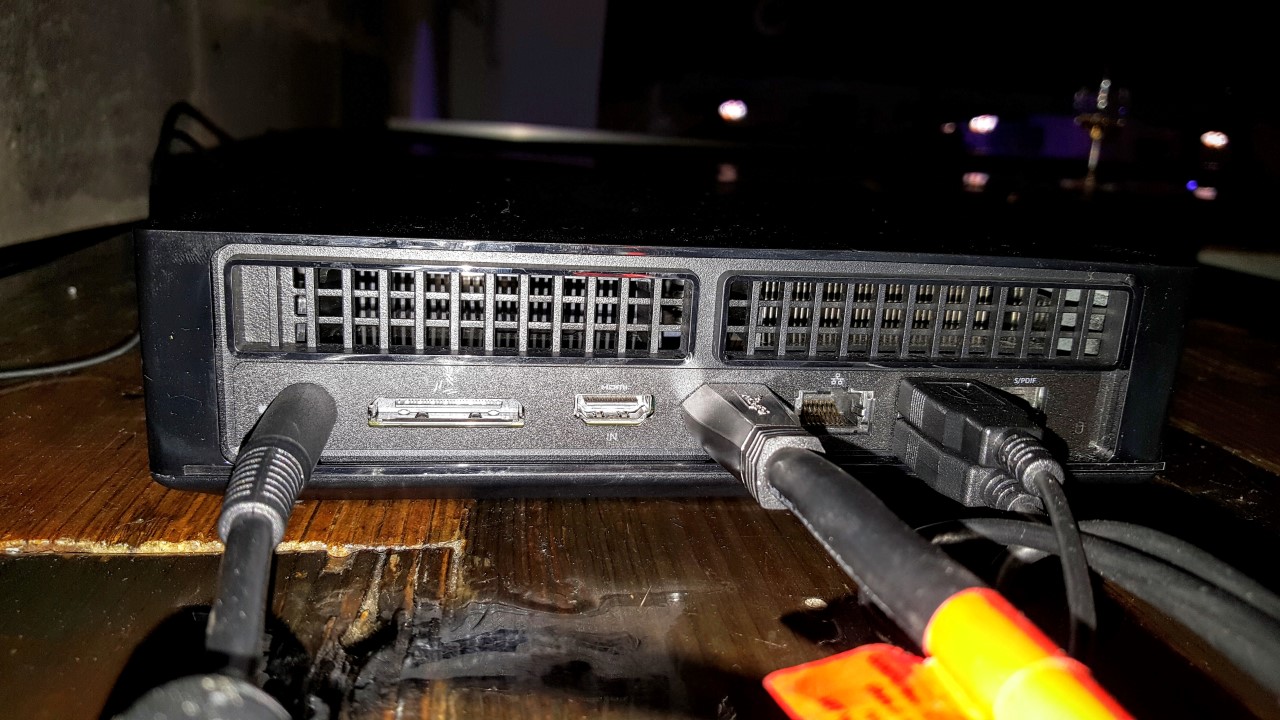 In my experience, I can tell you that I noticed a large improvement in how the Alpha R2 performs over the original as I was able to play a number of newly-released games, including Overwatch, Mirror’s Edge Catalyst, and DOOM, all on High/Ultra settings, depending on the game. Considering I was barely able to get games like Mad Max to run on Medium settings on the original Alpha, this is a big deal. And all of this was done just using the GTX 960 GPU with things looking even better when I hooked up a Graphics Amplifier to the R2 with a GTX 980 TI installed, which allowed me to easily play those previously-mentioned games on Ultra settings without breaking a sweat.

With all of these improvements made to the Alpha’s internals, I’m not surprised it sounds like a jet engine when playing games that are more demanding on the system. Each time I played games like DOOM, the fans within the Alpha would work overtime in order to reduce the sudden increase in temperature. Since I have the Alpha hooked up in my living room, the sound didn’t bother me as much, but if you plan on using it in a small space, you might want to invest in some headphones, that is, depending on what you have inside of it. I’m sure the lowest spec’d Alpha would make much less noise than a fully tricked out one.

Even though I eventually installed the highest supported processor, RAM, and hard drive on the original Alpha, I felt like I could only do so much with what Alienware offered. That all changes with the R2 as its support for its Graphics Amplifier means I can now use nearly any desktop-grade GPU with the PC -- Yes, that goes for the newly-released NVIDIA GeForce GTX 1080, too. This also means the Alpha can now play games at 4K resolutions and supports VR, which would be impossible to do on the original Alpha or any other device its size. 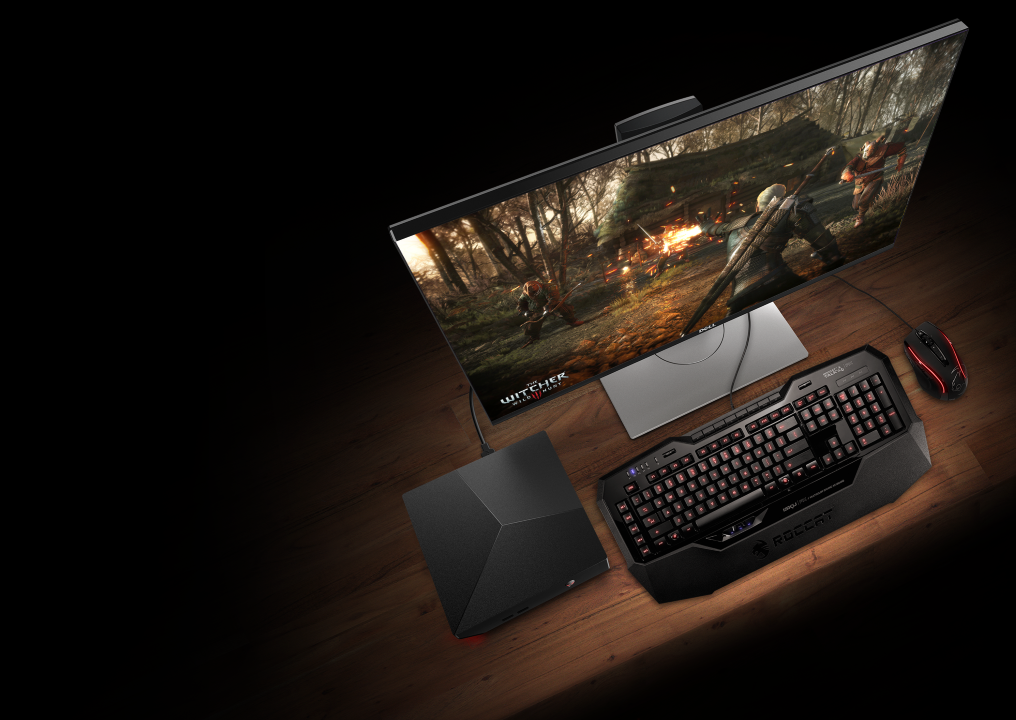 If you would prefer to just focus on the Alpha’s performance, I performed some benchmark tests using both PCMark 8 and 3DMark 11. In its PCMark 8 test, the Alpha R2 received a score of 3808, while its 3DMark 11 results being 6173 in Fire Strike 1.1, 18888 in Sky Diver 1.0, and 21523 in Cloud Gate 1.1. These results mean the Alpha R2, by itself, is capable of meeting the minimum PC requirements for virtual reality applications. I don’t know about you, but that’s extremely impressive in my eyes considering just how small the Alpha is. Again - it’s no bigger than the original Wii.

Hivemind and Controller Not Included

For the Alpha R2, Alienware decided to ship it without its Hivemind UI pre-installed and included a keyboard and mouse, instead of an Xbox 360 gamepad and wireless adapter. While the company still believes it’s developing a worthwhile user interface in Hivemind as it will soon make it available to additional Alienware devices, and possibly beyond, its decision to make both its UI and controller optional was due to a shift it’s taking with the Alpha.

This time around, Alienware wants customers to consider the Alpha R2 to be a small form-factor PC, first and foremost. Don’t worry, fans of Hivemind. The company is working on a new version of the UI for the launch of the Alpha and will have it ready to download on Dell’s support website in the coming weeks and it will be completely compatible with Windows 10.

Even though I enjoyed Hivemind at first, I ended up uninstalling it and using the original Alpha as a small form-factor PC. At the time, Hivemind was limited in its offerings, but since then the UI has expanded to deliver a wide variety of content to users, including Steam, Origin, Battle.net, UPlay, and additional support for other gaming software. Hivemind also supports third-party applications, such as Plex, Soundcloud, Flickr, and more. While I respect Alienware’s dedication to continuing to expand Hivemind, I’m pleased to see the company is now giving Alpha users the option as to whether or not they want to have it installed, rather than locking them from the get go.

The Alpha and The Omega 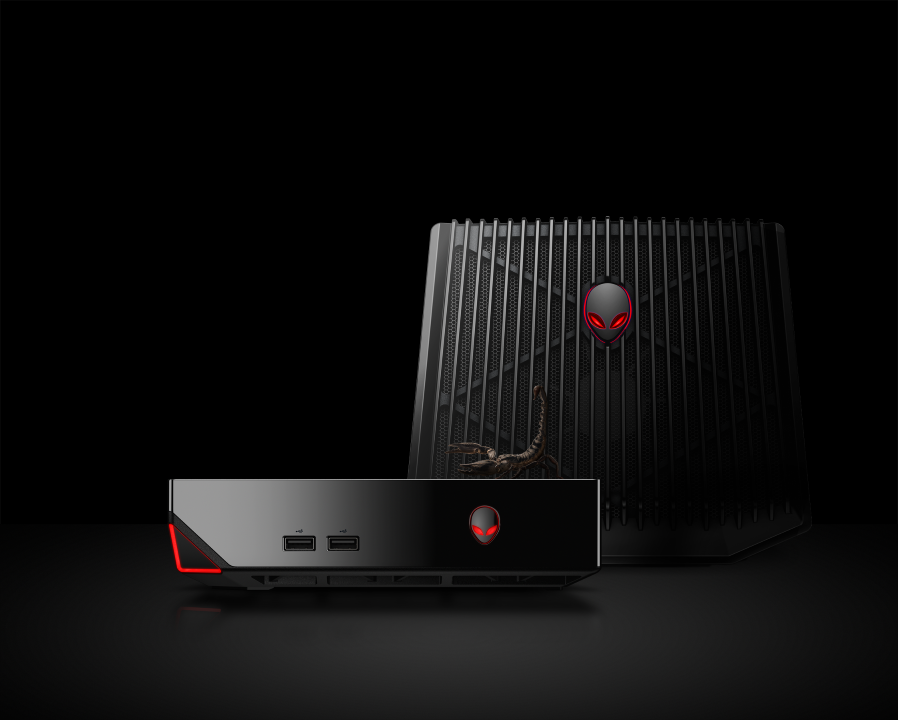 The Alienware Alpha is still in its infancy when compared to the 20 years the company has been creating hardware geared towards the gaming audience. But within 2 years, Alienware was able to first introduce the Alpha, release a Steam Machine version of it, and has now fine tuned it to deliver some impressive specs all within its small form factor, and is now future proof thanks to its Graphics Amplifier port. The Alpha R2 is what I hoped the original would be, and now that it’s here, I’m more in love with the little PC that could than I’ve ever been.