Square Enix’s GO games are a great illustration of how versatile game franchises can be. No matter the game, each entry manages to find ways to incorporate key characteristics into the design of challenging puzzle games.

Deus Ex GO is another brilliant example of this. It’s very similar to the simplified board game setup of both Hitman GO and Lara Croft GO. While incorporating elements that feel distinctly Deus Ex. Adam Jensen is the main player character, armor-clad guards stand at the ready in certain places on the board, turrets fire on sight, and small droid enemies aim to hunt Jensen down as he attempts to sneak past toward his objective.

It incorporates parts from the Deus Ex games as well. Various terminals can be hacked to grant Jensen control over various enemies and routes in the environment, energy cells can be collected to power Jensen’s various mechanical augments, and abilities from the core game series can be learned and upgraded.

All of this wrapped up and placed on a geometric, triangular background with similarly-constructed visual effects and a black, silver, and gold color palette gives Deus Ex GO the feel of being a main part of the series rather than a mobile tie-in castoff.

Deus Ex GO also introduces an online component for the first time via it level editor. In an effort to provide players with new content, the developers at Square Enix Montreal have implemented a new user level editor capable of building all-new levels using the same layout, asset, and features found in the main game. 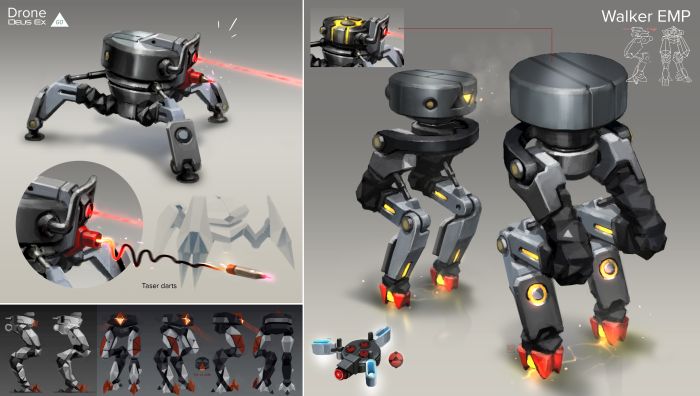 Once a level has been built and tested, it can be uploaded and made available to other players as an additional layer of puzzles to complete alongside the main game.

The iPad is an excellent system for this, since a touch screen allows for easy drag and drop placement, tracing, positioning, and playing. In an age where level editors venture into convoluted territory, seeing one so seamlessly arm players with creation tools is great. It should be note this feature will not be available until post-launch.

Square Enix developers have found a great puzzle game template with the GO series. Not only are they smart ways to re-invigorate and promote longtime brands; they’re also well-designed puzzlers with great visuals and brilliantly-integrated characteristics.

This Deus Ex GO preview was based on a pre-release iPad demo of the game at an event where food was provided by Square Enix.