Opinion: The Biggest Change Coming to Hearthstone (Isn't the One You Think)

In preparation for the Whispers of the Old Gods expansion for Hearthstone next week, Blizzard finally revealed another long-teased set of changes. Now that the play modes will be split into Standard and Wild, the developer is making a single core set of cards that will always remain in play, even as Standard mode constantly shifts the landscape of the game. To ensure the core set is a fair and balanced building block to this end, Blizzard had said from the beginning that several older cards would be rebalanced. Yesterday, we saw those nerfs unveiled, but one in particular stands out.

Most of the changes are to the Druid class, which was to be expected. Druid has remained very static, relying on the same handful of strong cards. Blizzard has struggled to design new cards that Druids would even want to use because the original set was so powerful. One particular two-card combo could amount to 14 damage, and was so prevalent it's known in Hearthstone circles as simply, "The Combo." Others, like changes to Silence or a significant cost increase to Big Game Hunter and Molten Giant, were similarly unsurprising. These are all cards that the fan community has expected to be changed for some time. The one that raised eyebrows, though, was Master of Disguise. 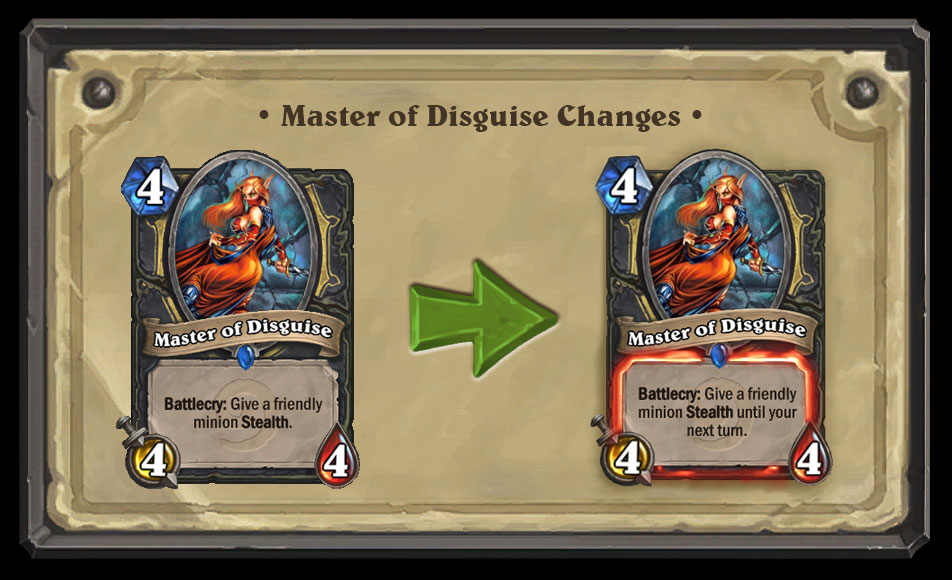 This classic Rogue card barely ever sees play. For a community accustomed to seeing nerfs hit cards that are being abused, it was an odd choice. Why pick on a card that's already so neglected? What's the point?

In actuality, though, Master of Disguise was the most important change to come to the core set. Because while many of these changes are functional, this one is philosophical. It reflects a larger change in how Blizzard's Team 5 thinks about and approaches the game. Master of Disguise was broken, not because it made for killer combos with other cards, but because it shackled Blizzard's design options. Permanent stealth is simply too powerful, and rendered the studio unable to craft any neutral cards with strong, ongoing effects.

We've seen similar actions, for similar reasons, before. When Blizzard issued the infamous Grim Patron nerf, the change didn't come to the Grim Patron itself. Instead, Blizzard hit the Warsong Commander with a drastic change that altered its ability significantly. The Hearthstone community generally rejoiced at the death of Patron Warrior, but the company was clear that it had a broader scope in mind. Warsong Commander wasn't just bad in conjunction with Patron Warrior. It was bad for the game as a whole. It limited the design space and tied Blizzard's hands for the creation of neutral, low-attack minions. Ben Brode revealed later that Dreadsteed had become a Warlock class card, for example, specifically because it was unworkable in an environment with Warsong Commander granting it charge.

Blizzard's own commentary on the Master of Disguise change reflects this mindset as well. It refers to the ability to grant permanent stealth a "design obstacle" and says the change "opens up exciting options for future cards." This more cautious approach to card design with greater awareness of how it will impact not only current cards but also the design space for future cards shows a maturation on the part of the design team.

This set of core card changes aren't the first major alterations we've seen in Hearthstone, and they're unlikely to be the last. The Master of Disguise change, though, shows that Team 5 is thinking of cards in terms of future applications and design limitations. The result will be a more thoughtful version of the game, as newly-released cards give greater consideration to future outcomes. That's a change that will have a bigger impact, long-term, than simply hobbling a popular deck.