Preview: Edge of Nowhere Is a Frozen Lovecraftian Horror Game

Thanks to the way it utilizes the immersive nature of the Oculus Rift, Edge of Nowhere is a great case for the potential of third-person horror games in VR. It's one of the many properties Insomiac Games showed off during a press event last week, alongside the new games The Unspoken and Feral Rites.

The demo begins in the far reaches of Antarctica, with the main character Victor Howard trudging through the snow-topped peaks of dangerous mountains. It takes heavy inspiration from the H.P. Lovecraft novella At the Mountains of Madness, a story focusing on several university students and alums as they set out on an arctic expedition gone horribly wrong. 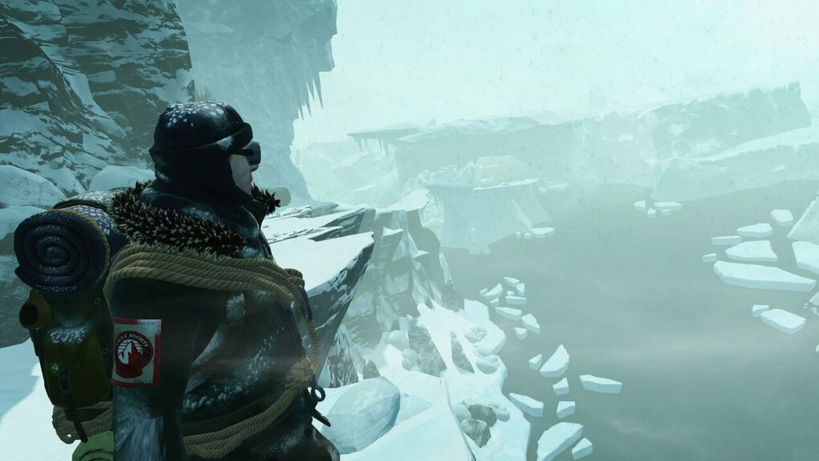 Creative director Brian Allgeier of Insomniac Games explains he and his team chose the Lovecraftian 1930s inspiration to help it build the personality they wanted.

“We really liked the style of the ‘30s, that kind of pulpy adventure feel,” he says, emphasizing the team’s desire to infuse horror with adventure.

As Victor continues to hike the frozen heights, he encounters a giant cliff face covered in ice. A fortunate find, it turns out, since he’s got two sharp ice picks at the ready. With a labored jump and the piercing clang of metal on ice, he establishes his foundation and begins to climb in a smooth pick, pull rhythm. 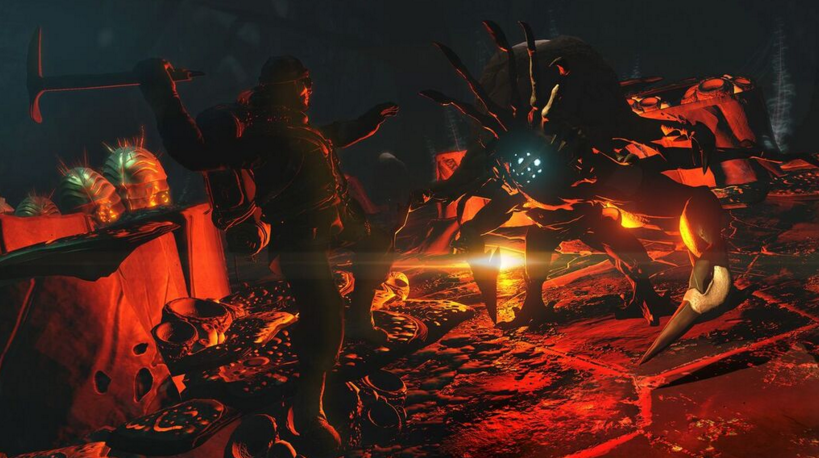 While playing, I realized there’s an innovative approach to cinematography going on. Rather than giving me sole control over the camera with the right analog stick, Edge of Nowhere treats your point of view as the camera to manipulate. The focus shifts upward to communicate visually the distance between the face, gradually pans overhead to show the dizzying heights at which the main character finds himself, and slides to a conventional over-the-shoulder view whenever the player is presented with a room full of enemies and obstacles.

Allgeier points to the use of camera angles as part of their method to naturally build tension and transfer some of Victor’s feelings to the player. 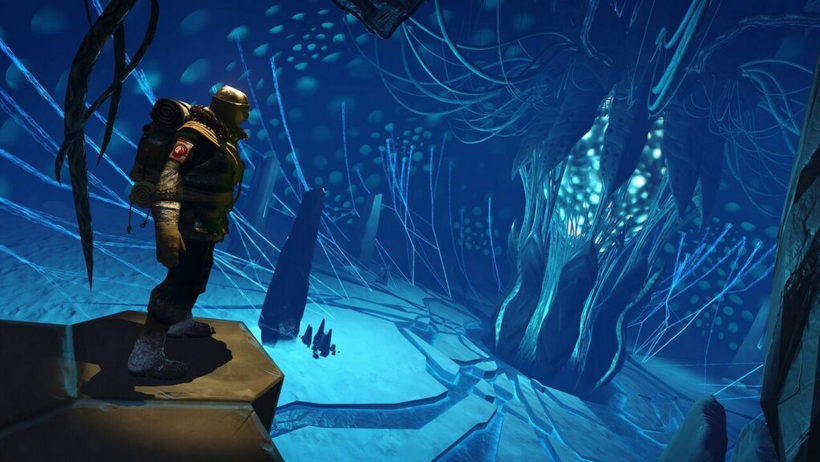 According to him, seeing the foggy abyss far below Victor helps to evoke feelings of vertigo in the player themselves, just as witnessing monsters on the cave ceiling can have a similar unsettling effect. But that’s not the only challenge the team faced when trying to build tension. Because Edge of Nowhere is a virtual reality game, the player still has the freedom to look all around Victor’s surroundings at any point. In order to best develop a strong atmosphere, Allgeier and his team focused much of their efforts on sound design and spatial awareness in VR.

“With VR, we don’t always know where people are looking, and sometimes we want to direct your attention to somewhere. We want you to know an enemy might have sighted you, so wound cues [are] a great way to direct people,” he says.

The sounds are layered and presented in stereo, ranging from the cold winds of the arctic to the guttural hisses and chirps of the monsters roaming the caves deep within.

As I continue to scale steep walls coated in ice, I begin to stumble across journals at old camp sites belonging to his fellow students and researchers. While he reads them, it becomes immediately apparent something bigger and much more sinister is going on. Strange, mangled non-human corpses scatter on the path, and eventually Victor stumbles across a cave with crab-like creatures hanging from the walls and ceiling. After knocking them off their resting spots with a well-placed rock throw, Victor can kill them by using one of his ice picks as a melee weapon before proceeding to the next room.

Sound becomes a creepy factor in the atmosphere whenever Victor enters a cold, quiet cave. At one point, he encounters slug-like creatures wandering the path ahead of him, walking on spindly legs and guarding the area based on sound alone. In a stealthy manner, Victor must navigate the cavern between all of them, occasionally drawing their attention by flinging rocks in opposite directions. It’s tense, and the creatures themselves are horrible, pulsing amalgamations of insects and crustaceans with vaguely human elements. 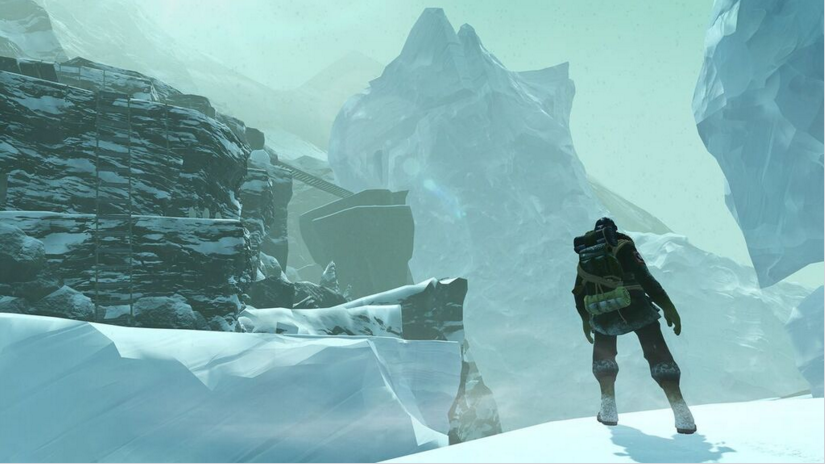 This combination is essential in creating something for the player to fear, Allgeier says.

“For these particular creatures, we wanted to create that unsettling feeling of the unknown. Seeing something that has a certain level of familiarity that’s disturbing—if you notice, a lot of these creatures have human-like parts,” he explains, mentioning the same echolocation-based enemies known as the Listeners. “…they’ve got these creepy, crawly legs that make them look like spiders, but they have this fleshy, human aspect to them.”

There are several monsters on display here, each with their own unique attack patterns and characteristics. Listeners locate and attack an intruder based on sound, the crab-like creatures are grunts not unlike the Headcrab from Half Life2, and characters with neon vision cones stalk another end of the cavern. They’re each dealt with using limited ammo and resources, forcing the player to make careful considerations if they want to survive. 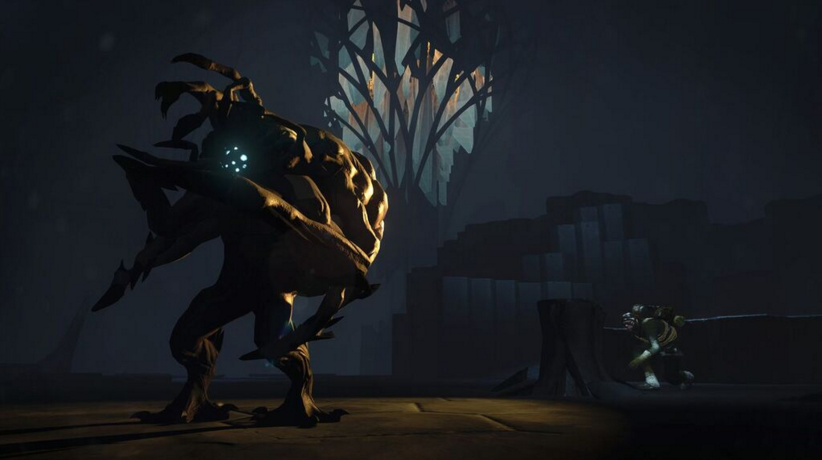 Edge of Nowhere’s embrace of Lovecraft doesn’t stop at the setting and creatures. There’s also plans to implement sanity effects to illustrate how Victor begins to lose his grip the longer he’s in the cavern.

After clearing out one area, Victor Steps into a smaller, darker cave and suddenly finds himself standing in his old university lecture hall, listening to his professor and venturing into the professor’s office with a fellow classmate. The longer he’s in the office with her, the more he loses his grip on reality. Books fly off the shelf toward him, the ground shakes, and eventually the world dissolves, returning him back to the cave and his grip on reality.

Allgeier is excited about the sanity effects, although he and his team are going about them in a different manner from other past games.

So, a majority of these supposed effects will be seen as they happen to Victor, showing his loss rather than evoking the player’s own. It’s all a part of the experience, Allgeier says, noting the technology allowing them to mix stereo sound with specific camera angles meant to stir up feelings of discomfort in the player. In virtual reality, there are countless options to tell stories in new and inventive ways, and Edge of Nowhere is embracing many of them.

This preview was based on a pre-release demo of the game at an event where transportation were provided by Insomniac.