Razer Ripsaw Review: The Capture Card of the Future?

Razer’s newest streamer-friendly tech, the Ripsaw, has hit the market and it’s ready to take the world of Twitch by storm. I’ve spent the past week and a half working with the new capture card, testing out its capabilities and features, and I have to say, I’m pretty impressed. Of course, like anything, the Ripsaw has its weaknesses. I wasn’t really fond of the lack of a native recording suite right out the box, or the lack of Mac support since my backup computer is a Macbook Pro. But, overall the plug and play setup, the high quality features, and the sleek design make the Ripsaw a pretty good capture card.

Plug It In and Go

The standout feature of the Ripsaw is the plug-and-play aspect, which makes it extremely easy to get it all up and running. Just hook the card to your computer, throw your HDMI connectors on, and then log in to Razer Synapse to get all the drivers you need to run the device. It’s one of the least complicated setups out of the different capture cards I’ve tried which include Avermedia and Elgato cards.

From here you’ll just need to launch your chosen streaming application, we tested it using OBS, and launch your stream. The really nice thing about it all is the fact that the Ripsaw comes with all the necessary cables and connectors you’ll need to be able to capture gameplay from the PS4, PS3, Xbox 360, Xbox One, PC, and even the Wii U. This means you’ll have to spend less time fumbling for cables, and more time growing your stream.

If you’re looking for quality out of a capture card, the Ripsaw hits all the marks it needs to hit. Featuring 1080P capture up to 60FPs, and optional audio mix-in, the Ripsaw easily stands up to the highest level of the Avermedia and Elgato cards. The biggest let down here is the fact that you won’t be able to hit that high of quality when streaming unless you’re partnered with Twitch, have an insane internet connection, and a very beefy computer. Having the option to stream at that high of quality doesn’t hurt, though, and it comes in handy in you plan to use the Ripsaw to record gameplay for YouTube or later use. 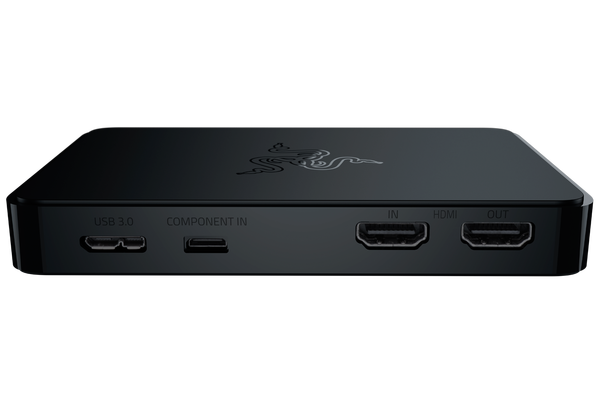 Standing Up to the Competition

The biggest weakness the Ripsaw suffers from is the lack of any native recording suite right out the box, though we have been told that  the Razer Cortex: Gamecaster software will support the Ripsaw starting in May. Since we can't really talk about how this software will support the Ripsaw, you’ll want to steer clear of it for now if you’re looking for a capture card that already offers an easy way to record, edit, and upload videos. The Ripsaw isn’t bad for these applications once you get it set up--you can still record footage using OBS or Xsplit. But setting those programs up to record is a little more complicated than setting up an Avermedia or Elgato. You also don’t get the option of an in-app screenshot button, which is something I use daily in my line of work.

Of course, not everybody has a need for in-app screenshots, and for those looking to get into streaming with a simple and elegantly designed device, the Ripsaw is a good direction to take. Coming in around the same price as an applicable Avermedia or Elgato, $179.99, it’s really all comes down to what you’re looking to get out of a capture card right out the box.

Razer has been pushing hard into streaming territory over the past few months and their recent release of the Razer Ripsaw will bridge that gap between streamers and professionalism even more, allowing anybody access to a new plug and play capture card that works without a lot of fancy drivers and applications. Of course, you’re still going to need OBS or Xsplit to make use of the Ripsaw, but you won’t have to worry about any other applications getting in the way. It’s by far one of the easiest capture cards that I’ve used in terms of getting it up and running, not to mention it looks really good sitting on your desk, but the lack of a native recording suite right out the box really hurts the Ripsaw when you compare it to the competition’s offerings.

These impressions are based upon a retail unit provided by the company. The Razer Ripsaw is now available for $179.99.