Ubisoft publishes stats celebrating one month of The Division

A plague wiped out New York City. Food and water are scarce. Basic services are nonexistent. Everyone you knew and loved in the Big Apple is dead or dying.

Hey, turn that frown upside down! Aside from all that death and carnage, things are looking pretty good for fans of The Division.

It's been a month and change since the game launched on PS4, Xbox One, and PC, and Ubisoft has published some interesting statistics gathered from across all platforms, tallying up total play time, enemies killed, and other miscellany.

Business, business, business... numbers! Per Ubi's infographic, players have killed over 17 billion enemies, saved approximately 250 million civilians, and favor the classic AK-47 as their weapon of choice. Oh, and most importantly, these special agents have stayed in tiptop shape by performing 150 million jumping jacks.

The most interesting statistic (besides the jumping jacks counter) might be how players are spending their time in-game. Ubisoft shows 57.2 percent of players going it alone in solo play, while 48.8 percent prefer to buddy up. 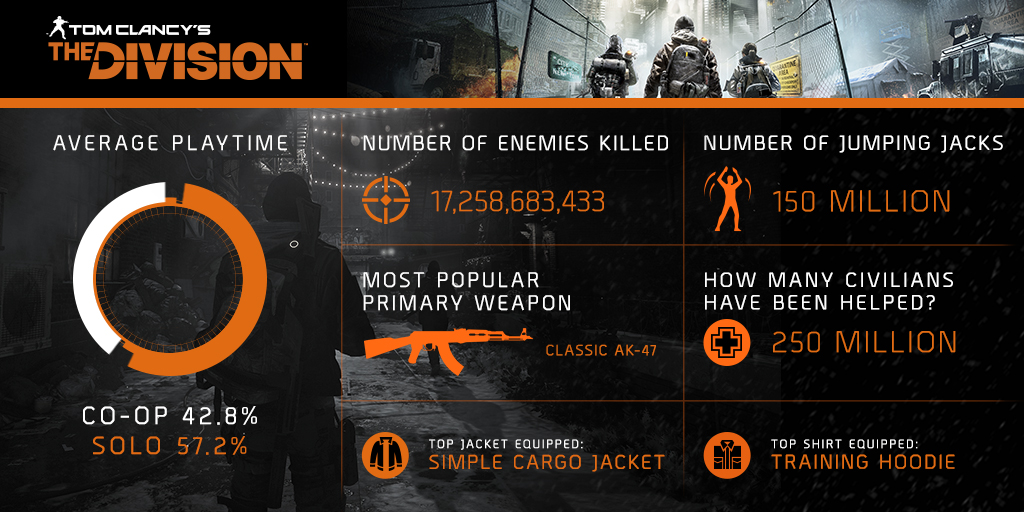 Those numbers have already changed since the report was published, and will undergo still more revisions after players get their hands on the free Incursions update due out today, April 12. As a reminder, "The Division will have another free update, Conflict, as well as three paid expansions (Underground, Survival, and Last Stand) coming throughout the year," according to Ubisoft.

Xbox One owners will get access to Underground and Survival 30 days ahead of their PS4 and PC brethren.