Breaking Down Hearthstone's 'Whispers of the Old Gods' Cards (Part 2)

Hearthstone next big expansion, Whispers of the Old Gods, will be wrapping its tendrils around the community in about a month. There's plenty to be revealed in the meantime, though, with only a dozen or so of the full 134 card set revealed so far. To keep pace leading up to the launch, we're going to be taking a fresh look at all the new card reveals every Friday. 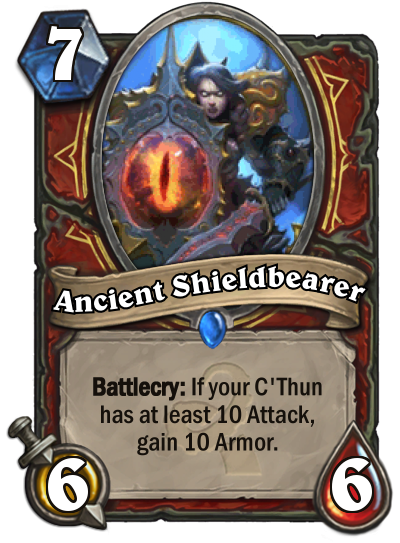 Battlecry: If your C'Thun has at least 10 Attack, gain 10 Armor.

Unlike many of the C'Thun synergy cards we saw revealed during the announcement presentation, Ancient Shieldbearer rewards you for already having built up your C'thun. As long as you've buffed it with a few cards like Twilight Elder and Beckoner of Evil, it comes with a strong effect that would be right at home in any armor-heavy Control Warrior deck. It also synergizes well with Shield Slam for an easy way to take down almost any big minion in the late game.

Plus, Standard Mode is going to be forcing deck builders to look for new 7-drops. Dr. Boom won't be the automatic choice for that position, so it's possible a card like Ancient Shieldbearer could fill in the gap. 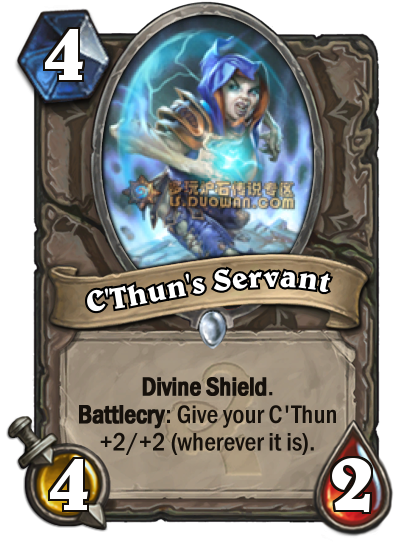 It stands to reason that C'Thun needed to have a few clunkers among his acolytes. As opposed to Twilight Elder and Beckoner of Evil, both of which have decent vanilla stats for their cost with the C'Thun buff as a bonus, C'Thun's Servant has pretty terrible stats. It's comparable to Big Game Hunter or Cult Master, but both of those come with big game-swinging effects that are worth the sacrifice of two stat points. C'Thun's Servant has a Divine Shield, which helps protect it somewhat, but that essentially makes it a 4/3.

Its effect is identical to Beckoner of Evil, and can be replicated by the Twilight Elder if you can keep it on the board for more than one turn. In both of those cases, you wouldn't need to be making such a trade-off. 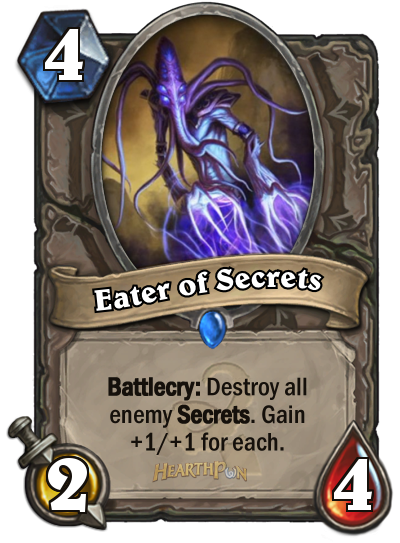 Battlecry: Destroy all enemy Secrets. Gain +1/+1 for each.

If taking Avenge out of Standard play wasn't enough to kill the much-derided Secrets Paladin, this certainly will be. The card has poor stats for the cost, but if it eliminates just one secret it goes up to a respectable 3/5 for 4-mana. If the meta is full of Hunters or Mages playing Secrets, that's enough reason to include one in your deck as a tech option.

If the Wild meta stays full of Secrets Paladins, though, Eater of Secrets is going to wreak havoc on them. Most variations of the Secrets Paladin play at least three Secrets at a time, if not four or five. That means your 4-mana Eater could become a 7/11 and trade with the now-neutered Mysterious Challenger.

Chances are the mere existence of Eater of Secrets will render Secrets Paladin decks obsolete, but it will remain a decent card in general regardless. 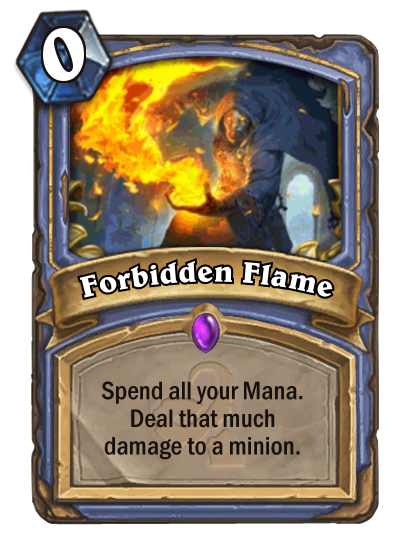 Spell: Spend all your Mana. Deal that much damage to a minion.

For as intriguing as the new Forbidden spell cards may be, Forbidden Flame was a strange way to debut it. Frankly, it just isn't a very good card. The Mage is already chock full of spells that do more efficient damage for the cost, from Frostbolt (2 mana, 3 damage) to Fireball (4 mana, 6 damage). Even Flame Lance, which hardly sees use in competitive play, is 5 mana for 8 damage, and it has the same minions-only caveat as Forbidden Flame.

The strength of Forbidden spells is to smooth out a mana curve. If you find yourself floating an extra mana or two or five, you can use it to deal a little extra damage. That gives this card more versatility than many spells, but it's eating up a card out of only 30 in your deck. That's going to be too steep a price for most. However, it could be an easy way to make up for the loss of Spare Parts in decks that revolve around Archmage Antonidas. 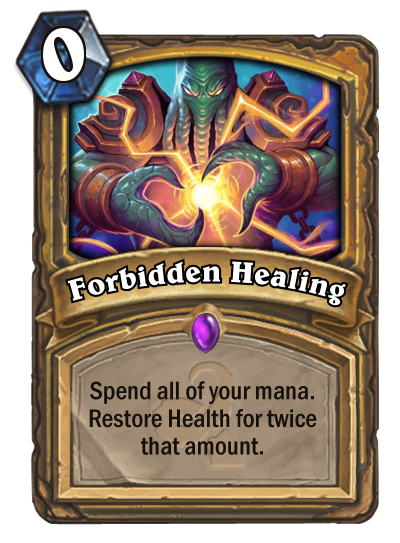 Spell: Spend all your Mana. Restore Health for twice that amount.

Reno Jackson has rendered most other healing spells obsolete, but Forbidden Healing still makes for a nice flexible option in Paladin decks. For one, it's not tied to your Hero, so it gives you the option of healing a minion. If you're going to float some mana anyway and need a little health boost for yourself or a minion, it's an easy way to get a little extra. And in a pinch, at 10 mana, you could restore a whopping 20 health. Perfect for dodging a combo finisher that you know is coming.

All that said, like Forbidden Flame, this takes up a card in your 30-card deck, and that's one less offensive card you can equip. Reno Jackson isn't out of rotation yet, so he's probably still your better bet for big heals, and the Paladin's own often-unused Holy Light is a much more efficient healing spell, if a little less versatile. 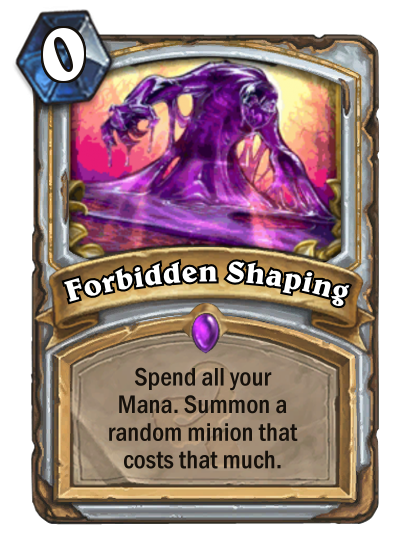 Spell: Spend all your Mana. Summon a random minion that costs that much.

Unlike the Mage's Forbidden spell, which less efficiently deals damage in a class with lots of other options, this Priest card is extremely useful. Not only does it put power on the board to act as more than simple removal, it helps smooth out the mana curve for Priests.

The class has historically struggled with floating extra mana and having a constant stream of minions to play, making it naturally very reactive. Priests usually have to wait for their opponent to move and then respond. A spell that constantly assures they'll have something to put on the board is a big swing for the class, and could help make it a little more aggressive. 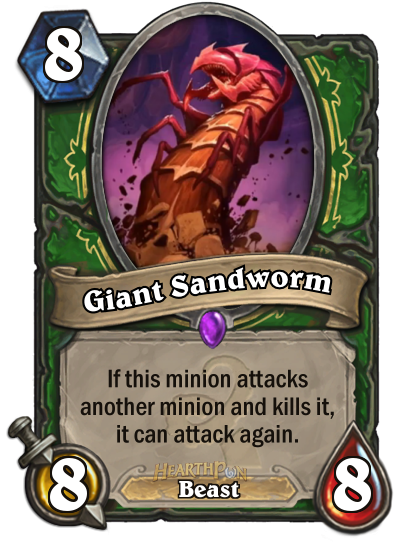 If this minion attacks another minion and kills it, it can attack again.

This is a big card with a big powerful effect, and it's easy to envision dream scenarios. Pairing it with a Tundra Rhino already on the board would give it charge, making it an even better version of King Krush. Giving it Bestial Wrath would not only make it a 10/8 powerhouse, but render it invulnerable while it clears the opponent's board entirely. It has the potential to act like the rare Mega-Windfury. Plus, it has the Beast synergy, making it another possibility for cards like Ram Wrangler and Tomb Spider.

Whether it sticks around as a Hunter staple, though, will depend on how much Hunters are forced into the late game. The class has always been better in the early game, with few late-game control-oriented options. Since the advent of Reno Jackson, Hunter has struggled to adapt to a slower playstyle. Giant Sandworm is a nice tool in that direction, but it might not be able to pull off such a shift all by itself. We'll have to see if other Hunter cards in the set help make Control Hunter a viable option. 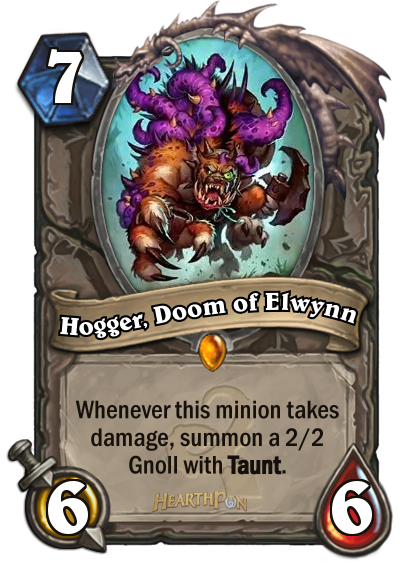 Whenever this minion takes damage, summon a 2/2 with Taunt.

Another card vying for the coveted 7-drop spot now that Dr. Boom is going out of Standard rotation, this corrupted version of Hogger provides decent board presence with an effect that assures you can always put a small taunt on the board. If you happen to play a class that either can or does regularly damage its own minions, like Mage or Warrior, taunts will be flowing. A Priest could also constantly heal Hogger so it can put out Gnolls indefinitely.

However, the easiest comparison is to the Warrior's Obsidian Destroyer. The 7/7 for 7 regularly spits out 1/1s with Taunt, and Hogger basically takes 1/1 of its stats and transfers it to the taunt minions instead. That does make a difference--it's not vulnerable to Big Game Hunter and one-attack minions like Silver Hand Recruits can't take out the taunts themselves, but it's still pretty comparable. Obsidian Destroyer doesn't see much play, so there's little reason to think Hogger wil either. 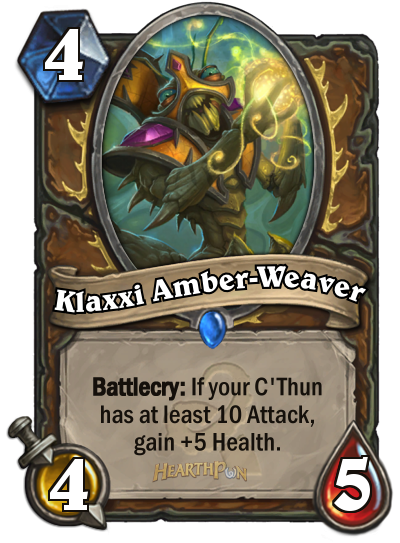 Battlecry: If your C'Thun has at least 10 Attack, gain +5 Health.

Like Ancient Shieldbearer, this Druid card is clearly meant to encourage a particular class to build a deck around the new C'Thun minion. To that end, it's a pretty good one. At worst, it has the vanilla stats of the Chillwind Yeti, which for a long time was the gold standard of a solid, if unspectacular, minion. If you happen to pop a few buffs for your C'Thun by turn 4, it gets the stats of a full-on Twilight Drake, without having to play Handlock to pull it off.

The smartest part about this card design, though, may be how it fills a hole for Druids. Its two most common four-drops, Swipe and Keeper of the Grove, are very responsive to your opponent's board state, and don't leave you with a strong minion on the board for their cost. Savage Combatant has helped a little, but it defines your turns from then on and its four health makes it vulnerable to most other minions in that range. Amber-Weaver lets you put something on the board that's a lot more sturdy, without simply responding to your opponent's moves. Expect this one to be a staple for C'Thun based decks. 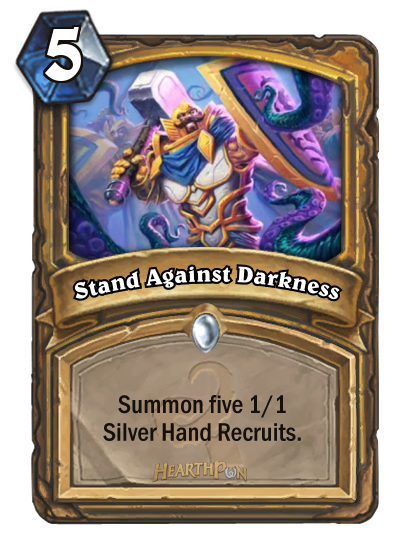 With Muster for Battle preparing to leave Standard rotation, Blizzard is giving us... a less-good version of it? Stand Against Darkness would appear to be very similar--5 for 5 instead of 3 for 3--but a few significant drawbacks make it a far less desirable replacement. For one, it lacks Muster for Battle's free Light's Justice weapon, which allowed you to exercise a little bit of board control on the same turn it was played. Weapons are ideal for protecting minions, and Recruits are especially vulnerable. Then there's the fact that Quartermaster is leaving Standard as well, so you'll no longer have that card to buff them. In Wild, where Quartermaster will still be in play, there will be no reason to play Stand Against Darkness instead of Muster for Battle.

Finally, its mana cost is problematic. Five mana puts it at a much more contested spot for cards, and by the time you can play it, your opponent is more likely to have big minions that can pick off your recruits with ease. Essentially, it's a slightly cheaper Dark Wispers without the element of an optional different effect, and you never see Dark Wispers in competitive play either.