By now, The Behemoth has an art style and a personality that's become distinctly recognizable. After its efforts on Castle Crashers and Battleblock Theater, there's been a certain joy that's come from wondering what the studio will step into next. That answer appears to be a somewhat unexpected one, as The Behemoth is ready to step into turn-based strategy with Pit People.

Pit People should look familiar to anyone that has played any of The Behemoth's games, with the animated cartoon style remaining intact. The genre and the setting, however, represent new territory for the developer. The story begins in ancient times and centers around a poor farmer named Horatio, who is trying to protect his farm and his son from hostile forces. Horatio loses both his son and his land, thanks to the work of an omnipotent narrator, voiced by Battleblock Theater's Will Stamper. The narrator has set out to make life miserable for Horatio, because... well, because he's kind of a jerk. In fact, much of the demo is filled with the narrator making hilarious and cutting remarks, while also occasionally stacking the deck against the player. 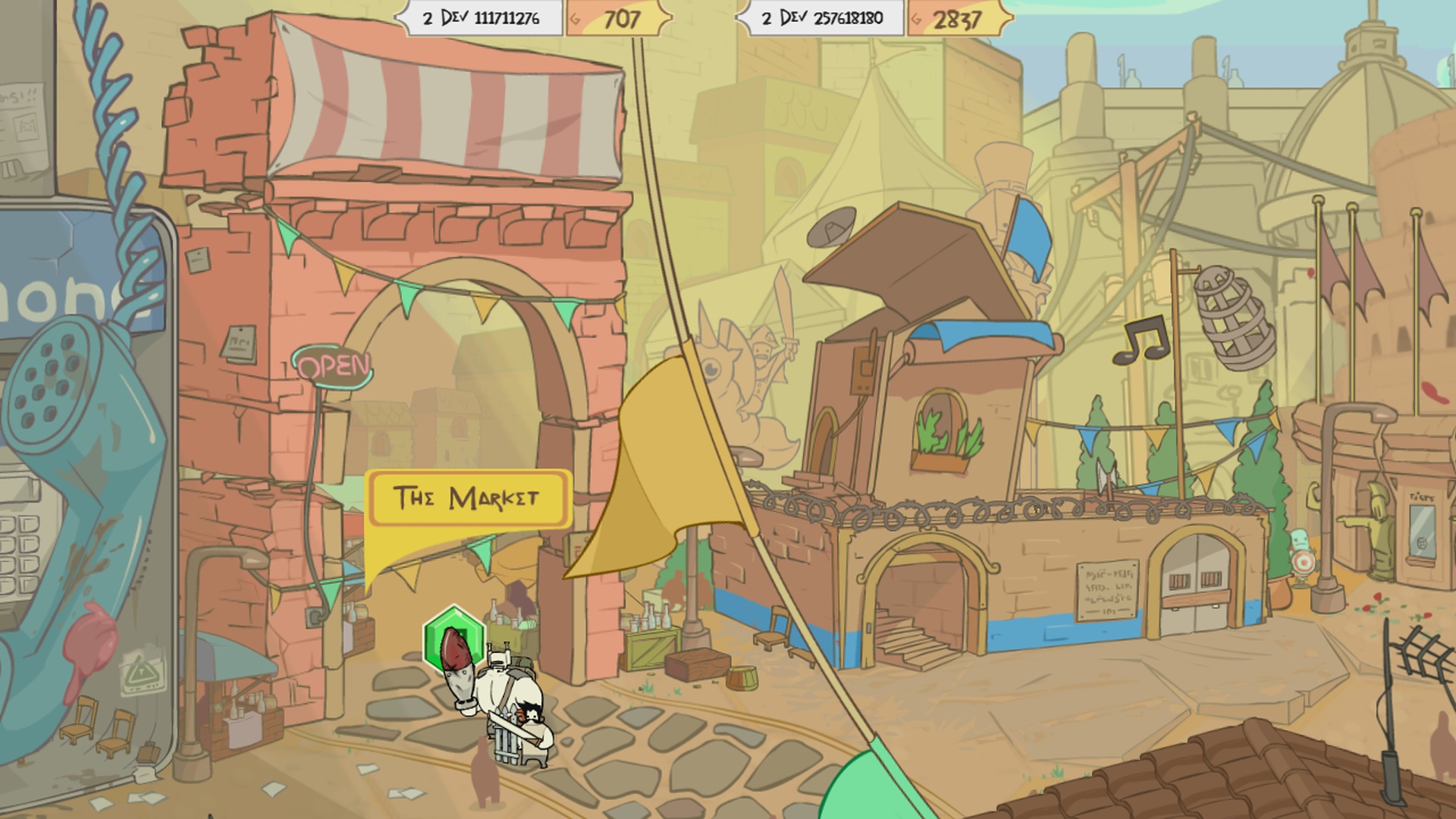 Horatio will not venture on his newfound journey alone (nor will he only have "a handful of blueberries and a stupid look on his face," as the narrator implies), as he'll encounter new party members as he goes along. Each of Pit People's playable characters have their own abilities and attack patterns, utilizing the hexagonal field in different ways. Horatio can block incoming arrow volleys and protect characters behind him. Fallen princess Pipistrella has a giant club that can do bonus damage against certain enemy types. The lonesome Cyclops has an axe that he can chuck across one hex, allowing him to attack from range. Then there's the lost viking Sofia, who has a net that lends itself to one of Pit People's other intriguing mechanics.

While there's a core cast of characters in Pit People, there's also the option to recruit enemy characters to fight by your side. The idea is similar to games like Pokemon, where the potential recruit must be the last one on the battlefield and in a weakened state. At that point, Sofia can deploy her net and catch this enemy, taking them to the hub town for future training. All the main characters and recruits can level up over the course of the game to learn new attacks and abilities, making the synergy question a little more prevalent as the game goes on. 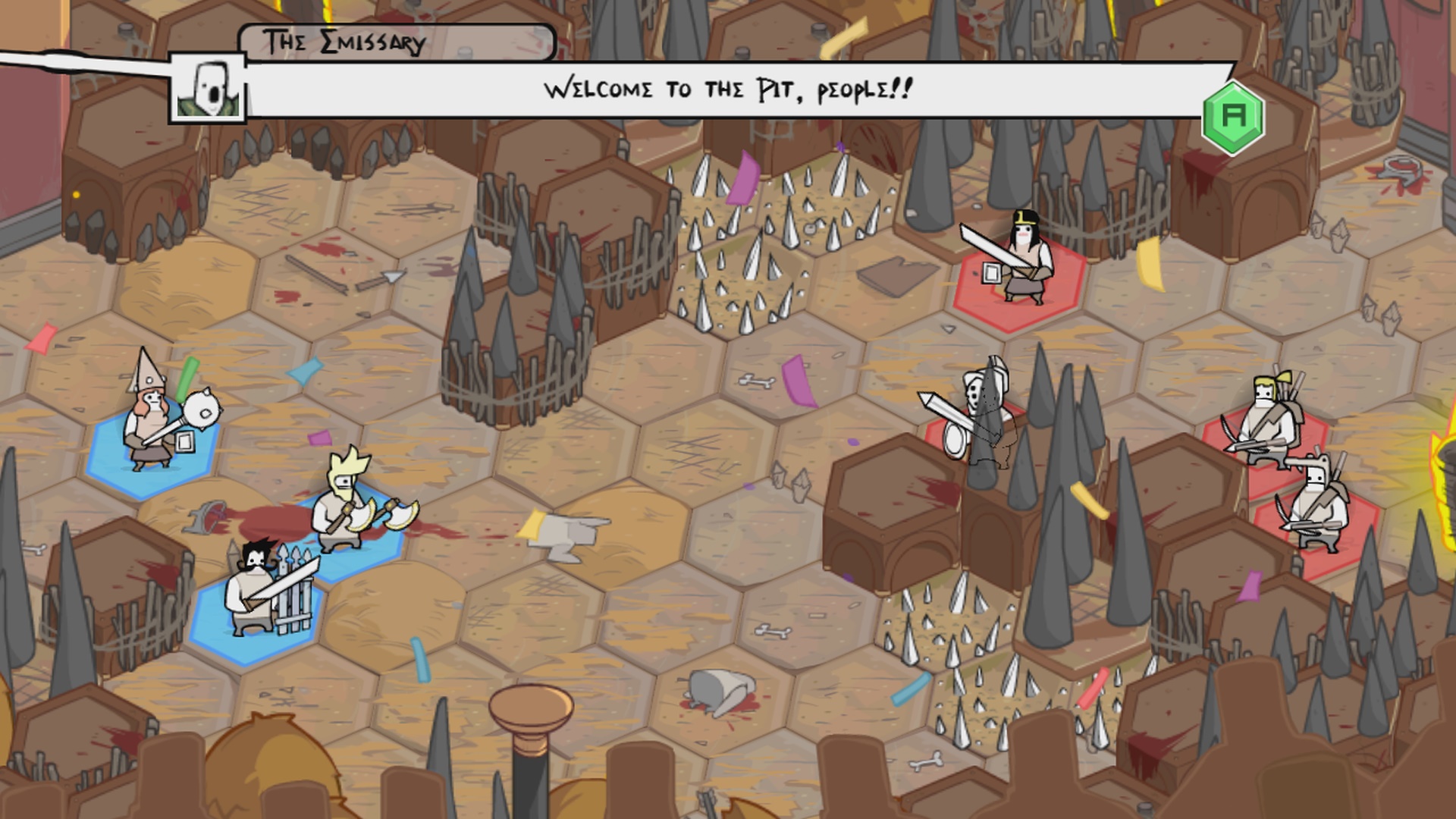 As one might imagine, certain mixtures of characters and recruits will get along better, as the key to victory is blending together abilities that play well together. But miscommunication isn't solely a hazard for the player's side. The enemies throughout the demo often didn't play nice with one another, with arrow volleys clumsily hitting their own partners and helping make those fights easier. In fact, the narrator would sometimes lament the enemy's incompetence.

In addition to some solid strategy play, Pit People is also filled with the kind of strange and sometimes anachronistic humor that has become The Behemoth's signature. I could rave about the narrator all day, especially since he'll often play off the game's lesser mortals that can only speak in "South Park" Canadian-style gibberish. There are also some off-the-wall moments of humor, like when Horatio encounters a pack of beach bully-like characters that motor off in a 1950s-style convertible. Likewise, one of the enemies I encountered packed a pair of sub-machine guns, which would theoretically tip the balance in his favor against medieval melee weapons, until I found that he's only try to bop my characters on the head with them. 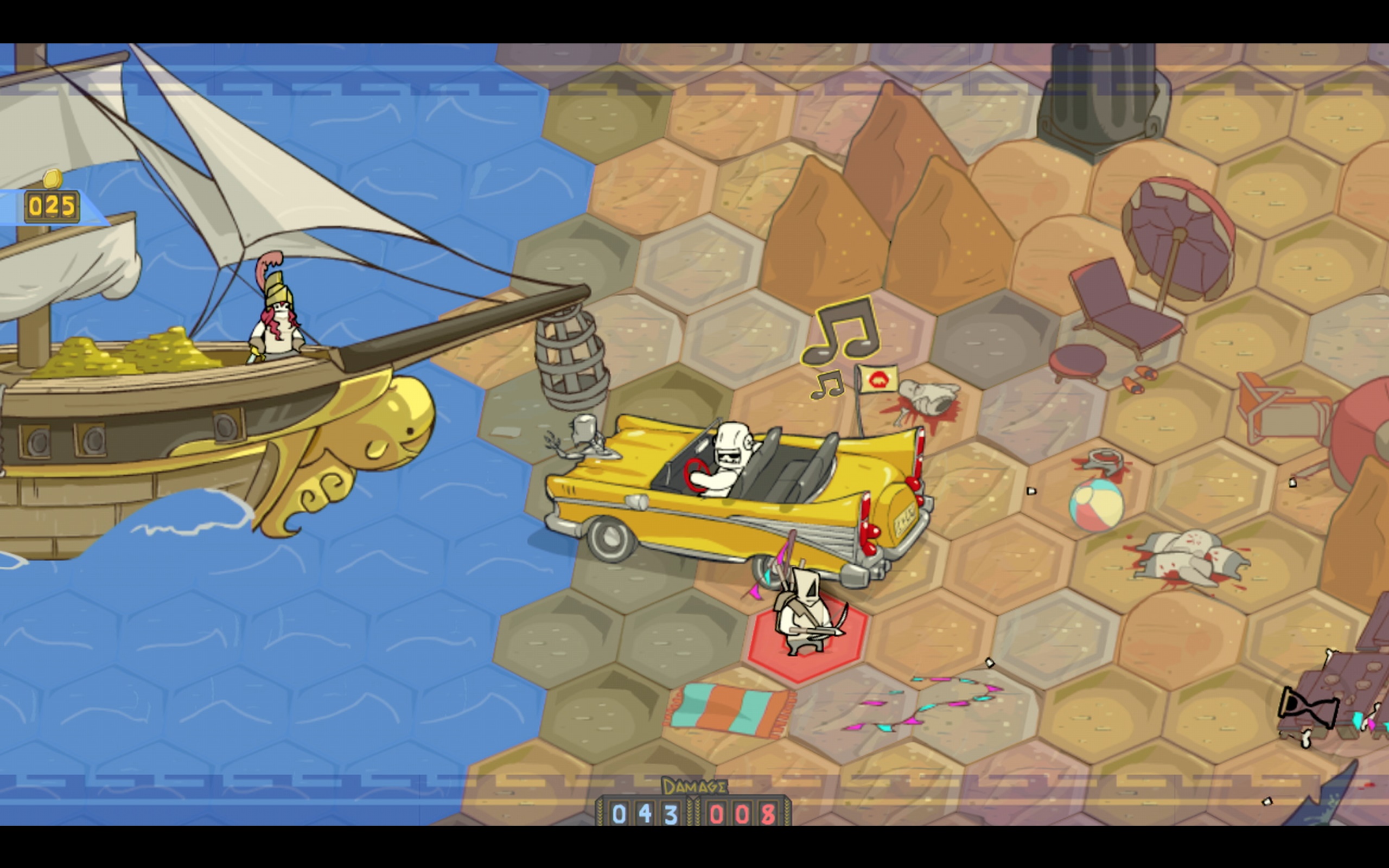 Pit People proved to be an entertaining demo, but The Behemoth's plot may be working against it somewhat. In trying to stack the deck against Horatio, he'll often encounter packs of enemies and while that's all well and good from a story perspective, in a strategy game, it means waiting for each individual character to take their turn. Worse yet, they're often not fast about it, so the wait can become a slog.

In terms of humor, The Behemoth is showing no signs of slowing down. Pit People looks to be every bit as entertaining as the developer's previous efforts, especially with Will Stamper's narrator driving the action. But Pit People also looks to be an interesting strategy game, putting more cerebral gameplay at the forefront. It might turn off those accustomed to this developer's faster-paced games, but those looking for an XCOM or Massive Chalice type of game will be pleasantly surprised.

Pit People is coming soon to Xbox One and Windows 10 PC. News on a closed beta should likewise be coming later this year.