This is a follow-up to our original review of Mega Man Legacy Collection on PC, Xbox One, and PlayStation 4. That review can be found here.

Back in August of last year, Capcom began the march towards Mega Man's 30th anniversary with the release of a special compilation of the Blue Bomber's first six games. On the surface, the Mega Man Legacy Collection looked to be a noticeable step back from the Mega Man Anniversary Collection released nearly ten years prior. After all, why settle for six games when the previous collection offered a couple more for about the same price range?

However, the Legacy Collection turned out to be a fantastic 'warts and all' recreation of the original six games, with Digital Eclipse hitting Capcom's goal of creating a 'Criterion collection' style of compilation. It was definitely a hit with Shacknews, as noted in our original review and now, the Mega Man Legacy Collection has hit Nintendo 3DS. 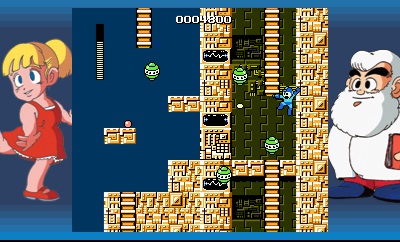 The first thing to note is that many of the notes touched on in our original review still stand with the 3DS iteration. The original Mega Man games remain intact, for better or worse. There's frustration to be found with the various framerate hitches, but anything different would lose a sense of authenticity. Scrolling enemies off-screen, the suspense from the framerate lag on crucial jumps, the glitchy graphics on particularly larger foes were all part of the original Mega Man experience. If duplicating the experience was the goal, Legacy Collection certainly succeeded. There are a only a select few spots where the old glitches don't quite work and that's more because of the 3DS hardware. In this reviewer's case, I wasn't able to make the old Elec Man glitch from the original Mega Man work due to the flimsiness of the Start button, but that's a rare exception to what's otherwise a perfect recreation of a series of classic platformers.

The faithful reconstruction of the old Mega Man games was a particularly impressive feat on PC and consoles, since the visuals were restored to crisp, colorful HD. But while the 3DS version certainly looks pretty, some of that lovely HD upkeep has been somewhat lost on the jump to the handheld version. Some of the other intriguing visual options, like the screen ratio and filter options have been removed. And most disappointing is that the games have not made the jump to 3D. In fact, the only aspect of the game that works in 3D is the art borders whenever they're enabled and that's a huge strain on the eyes when the actual game in the center is still a flat 2D.

In terms of features, those did make the jump to the 3DS. Players can still surf the database for each of the games, finding encyclopedia entries on characters and even fighting Robot Masters on demand while looking on their entry. The loading times are still non-existent, to boot. On top of that, there's even more content here, with new concept art and lore than the PC/console version of the collection. There's even an option on each game to play the original Japanese Rockman counterpart, which is a fascinating new way to experience these familiar gems.

Challenges also return, along with a special set of challenges that are unlocked through a quick scan of the Mega Man Amiibo. And it is just a quick scan, as users only need to scan the Amiibo once and the Amiibo Challenges are unlocked permanently. Just like the normal Challenge mode, these are brutally difficult stretches across several MM games, running the gamut from stretches of spike pits to a gauntlet with Mega Man 3's Doc Robot. The downside of the Amiibo Challenges is that completing them does not stack with the progress of the normal Challenges, so they won't count towards unlocking new Challenges.

At the end of the day, while the 3DS Mega Man Legacy Collection has a few less visual options, the increase in Museum goodies and the extra Amiibo Challenges make it feel like a more worthwhile pickup than the PC and console version. Even without those extras, just the novelty of being able to play these six games on the go feels like a winning proposition in itself.