Street Fighter V: How to Use V-Trigger Attacks

Capcom introduced its Variable battle system, or V-System for short, in Street Fighter 5 several months ago. The V-System allows each character tap into new abilities in a number of way by using one of three mechanics: V-Skill, V-Trigger, and V-Reversal. In this particular guide, we’ll be taking a look at how exactly you can use the Variable battle system to get the leg up on your opponents through the use of V-Trigger.

What is a V-Trigger?

Before we dive into each character’s V-Trigger and their use, we thought we’d shed some light on what exactly a V-Trigger is. Unlike the V-Skill, which can be used at any time, or the V-Reversal, which depletes a chunk of your V-Gauge to produce a reversal move, the V-Trigger will either slowly deplete your V-Gauge, or outright deplete it once it becomes activated. While what the V-Trigger does is different depending on who you’re playing as, activating is the same across the board. All you need to do is push HP + HK at the same time to activate it, which stands for Hard Kick and Hard Punch.

Once you hit both HP + HK together, wisps of energy will flow around the character to signify they’ve entered V-Trigger mode. You better make good use of it as the only way you can fill up your V-Gauge is by taking damage. And not all V-Gauges are created equal as each character will need to fill up one, two, or three levels in order to be able to use their V-Trigger, depending on who you’re using.

Now that we know what a V-Trigger is, how to obtain energy in the V-Gauge, and how to activate it, let’s take a look at what each ability does based on the character that’s being used. 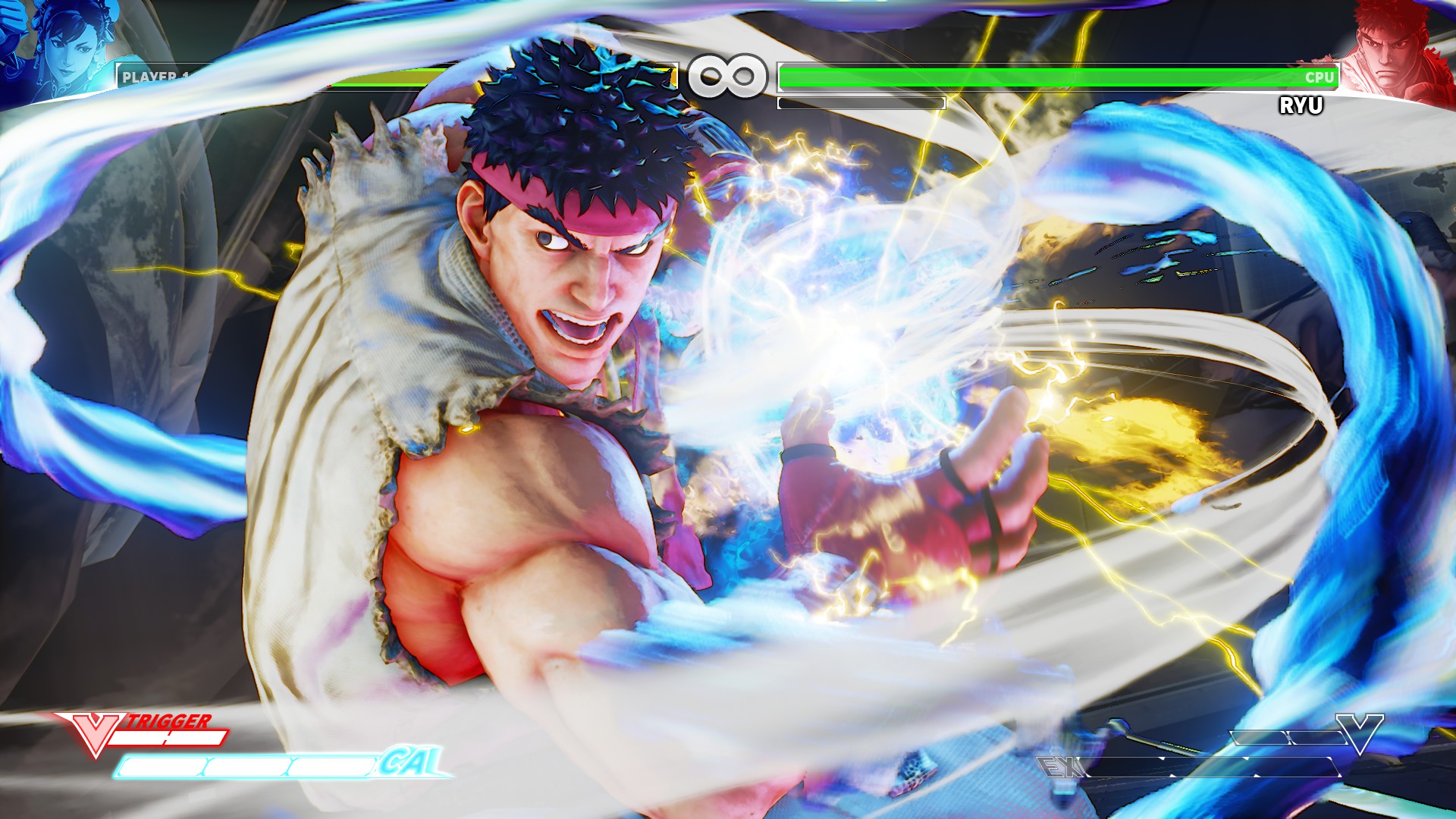 The Denjin Reiki helps Ryu give a boost to his most valuable special move: his hadouken. When his V-Trigger is activated, Ryu has access to powerful hadoukens that are faster, deal more damage, and are able to stun his opponents much quicker than his standard hadoukens. Ryu is also able to charge his hadouken, which allow it to cause even more damage, as well as break the guard of blocking opponents.

Finally, Ryu can apply his V-Trigger buff to his Shinku Hadouken, which turns it into an extremely devastating Denjin Hadouken. 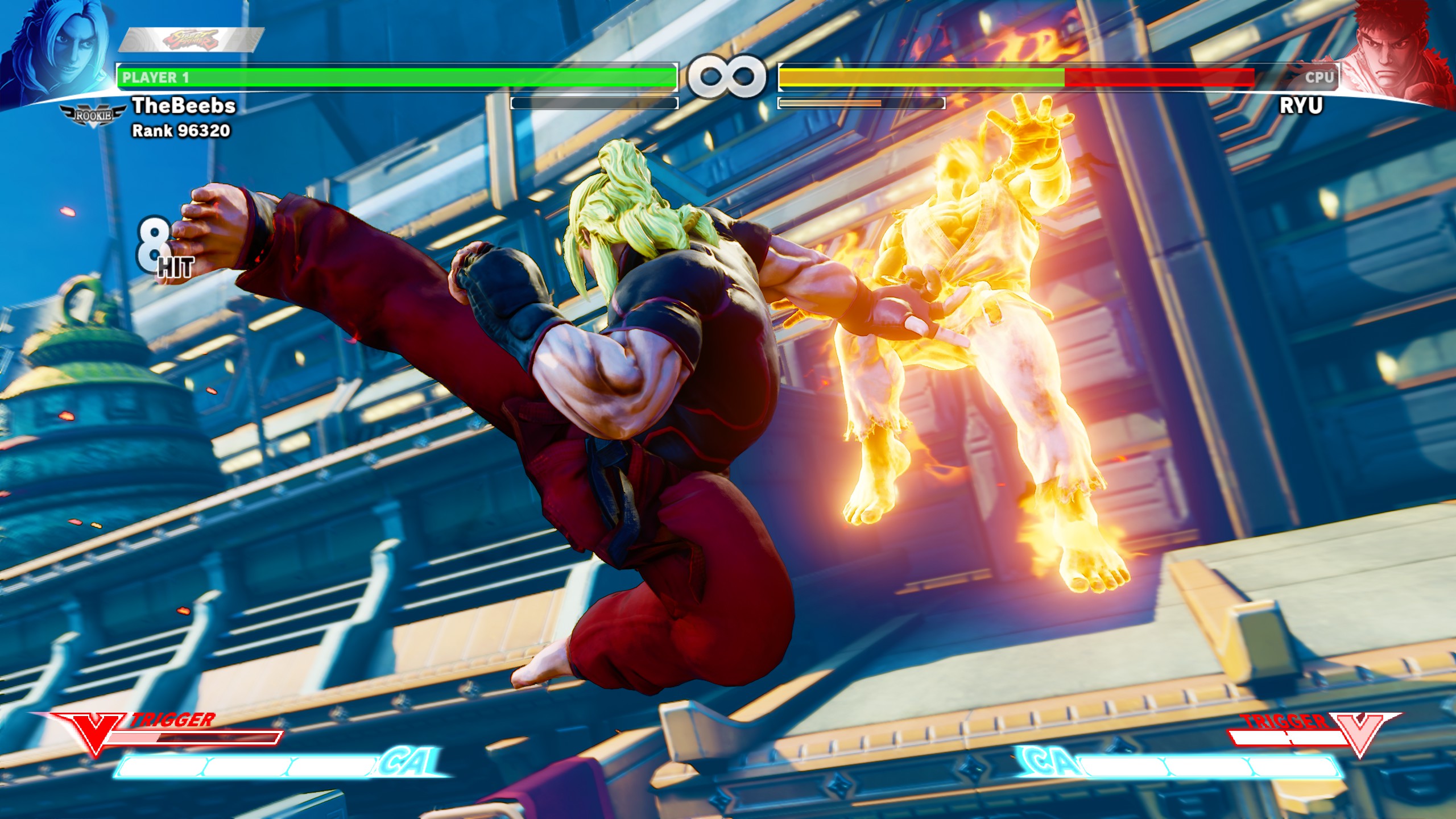 Ken Masters might look different this time around, but we can assure you that his fighting ability is still as ferocious as ever. When Ken’s V-Trigger is activated, his fighting energy turns into actual fire, giving him the Heat Rush ability.

When Heat Rush is activated, Ken’s special attacks deal more damage and can connect for additional hits. For those who enjoy a good combo, his trajectory alters a bit to provide a number of different combo opportunities. In other words, if Ken is put into the right hands, his Heat Rush ability could cause some serious, serious damage. 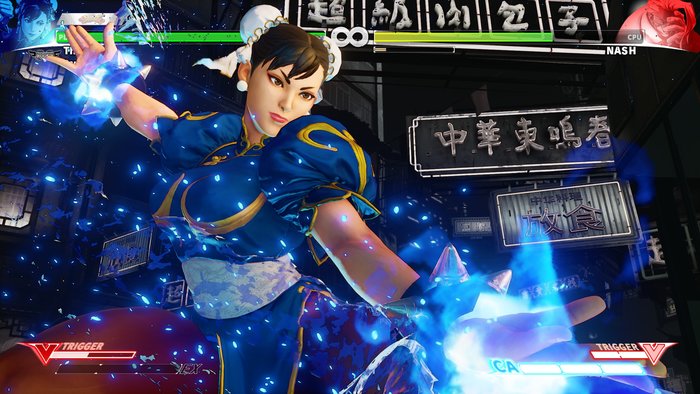 Unlike some of the other fighters who gain stronger special or super attacks, Chun-Li’s Renkiko V-Trigger allows her to deliver additional hits on her normal attacks. Light attacks deal just a bit more damage, mediums are able to deal out an additional hit, while heavy attacks can deliver two additional hits. These attacks can also cause a soft knockdown when used as an anti-air attack, which could allow for juggle opportunities. 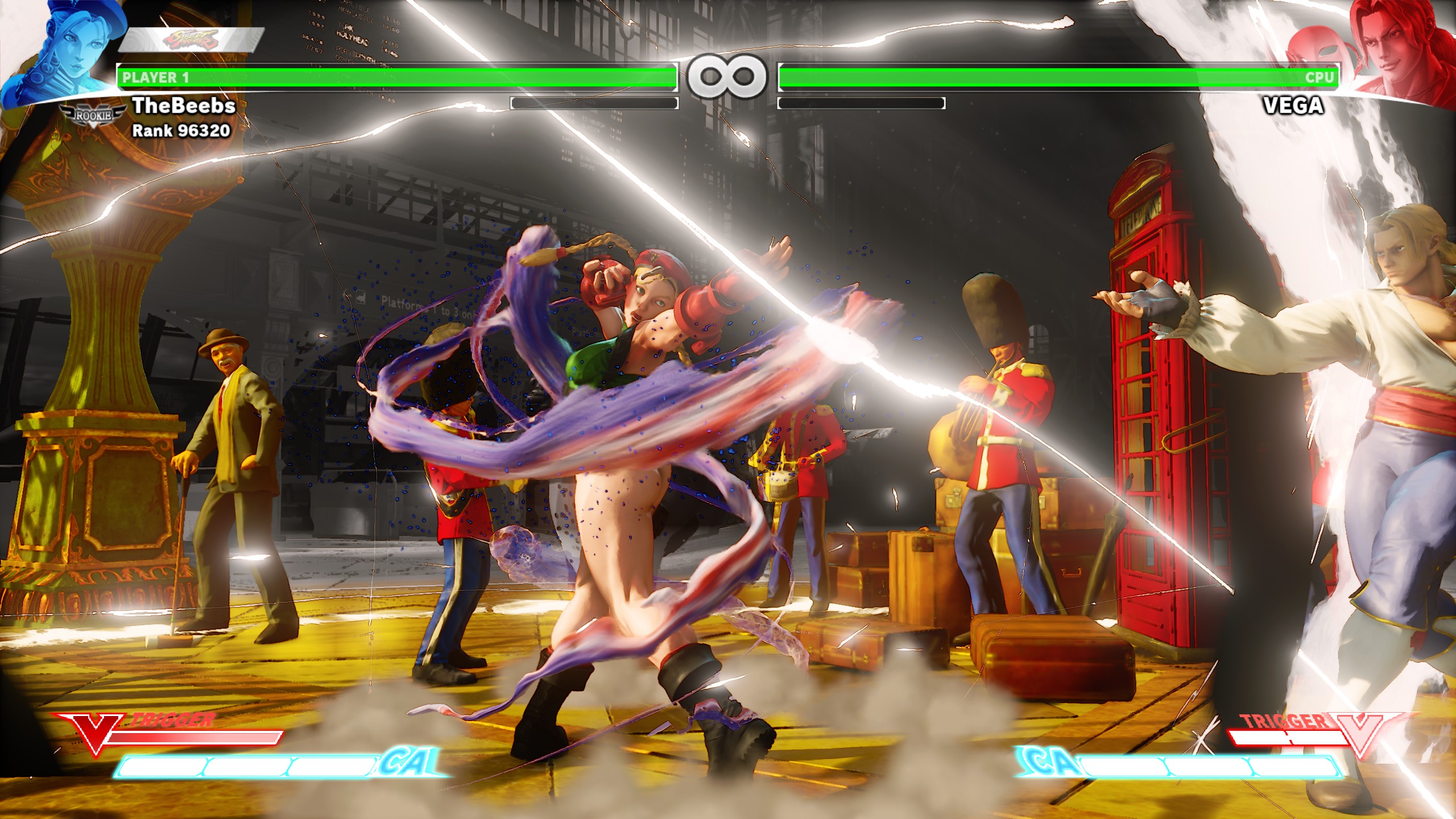 The Killer Bee, Cammy, can cause even more damage with all of her special moves when Delta Drive is activated. One example of this is her Spiral Arrow special attack, which now does 3 to 5 hits and is now able to pass through the opponent. Unfortunately, using her special moves while Delta Drive is active will greatly reduce the amount of energy remaining in her V-Gauge.

Outside of the obvious improvements to her special moves, Cammy’s speed is also increased. 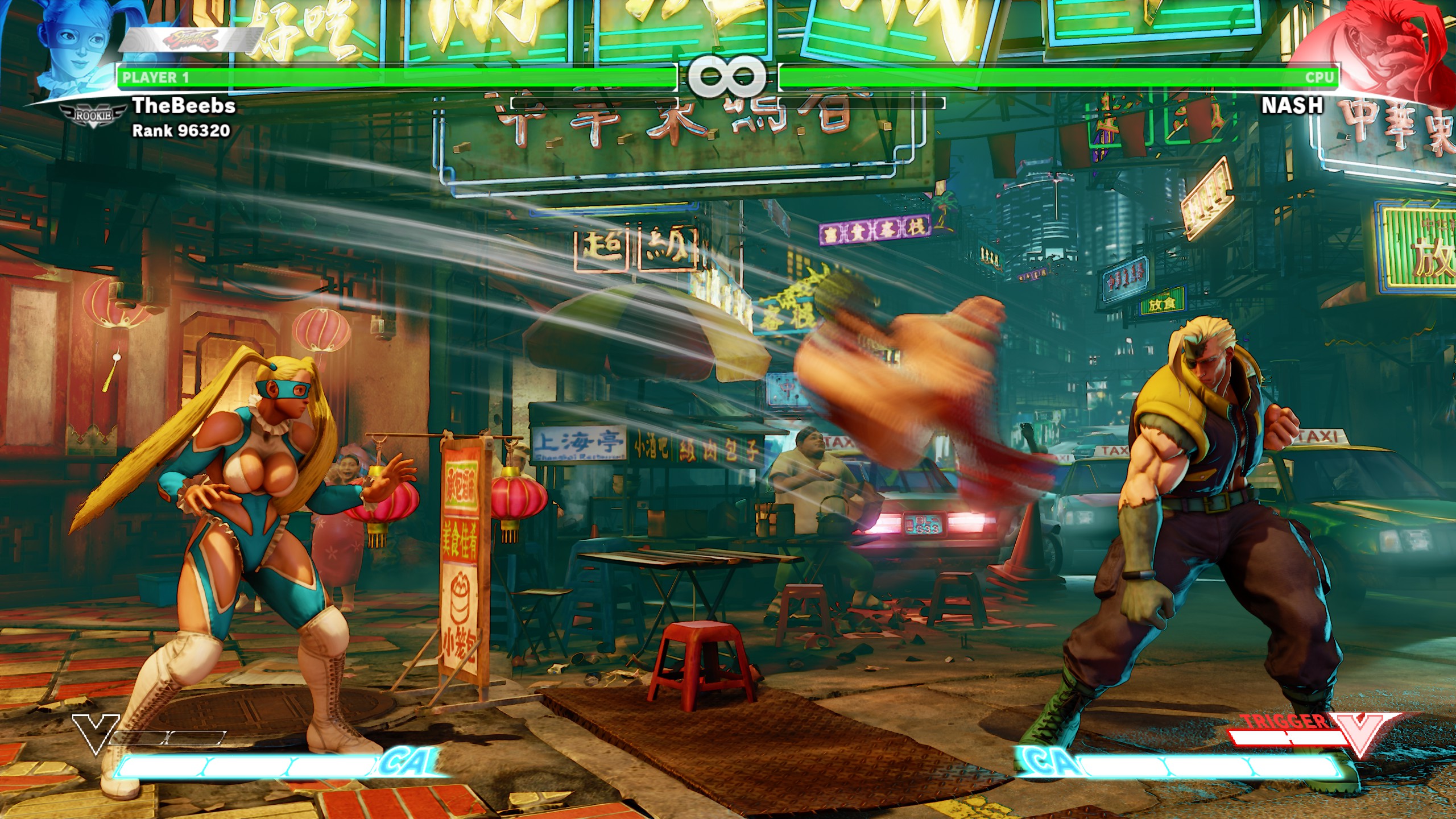 If you’ve been able to pull of R. Mika’s Critical Art or paid attention to her entrance, you’ll know she’s a part of tag-team duo. R. Mika’s V-Trigger allows her tag-team partner, Nadeshiko, to become even more useful with an attack that varies depending on the direction you’re holding when you tag her in.

If your controller is neutral, meaning you’re not holding it in any direction, Nadeshiko will body splash the opponent from the top of the screen. Holding back will have her perform a drop kick towards the front of your opponent, while holding forward will drop kick them from behind. 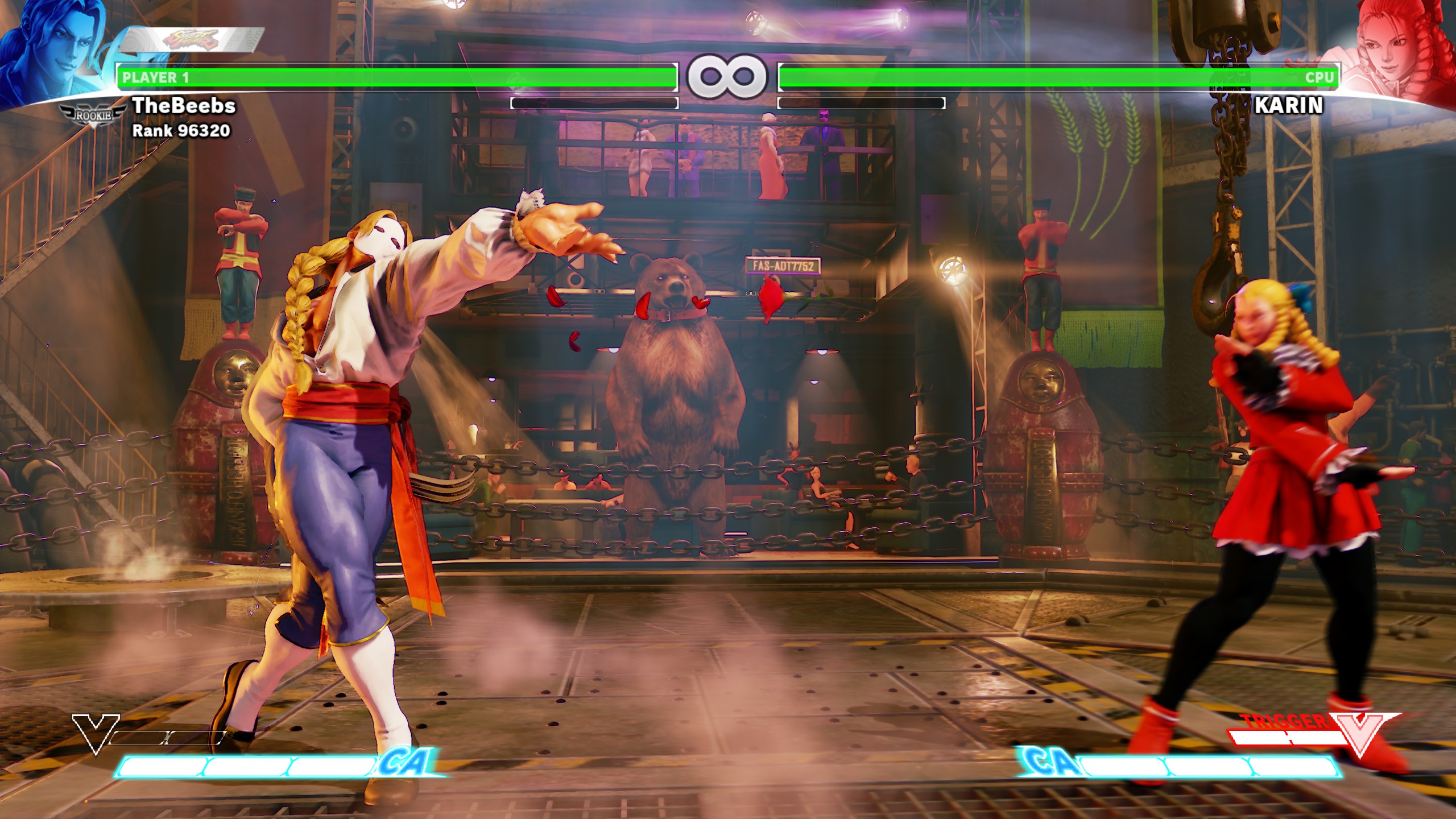 Vega has always been torn between being a lover and a fighter, and his Bloody Kiss V-Trigger makes that inner struggle even more apparent as he throws a rose at his opponent, to then shred them to pieces moments after. 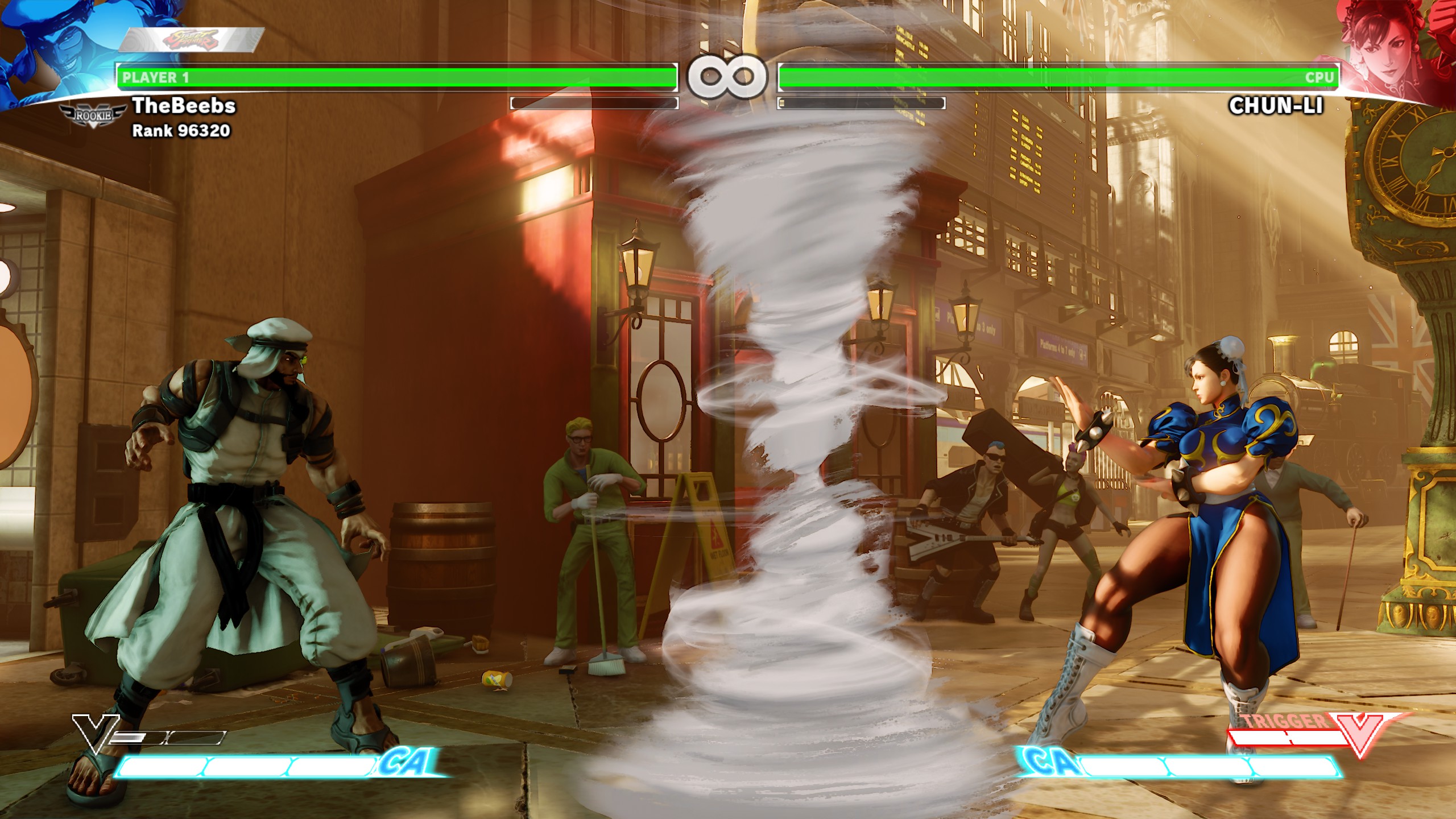 Rashid is the first fighter to hail from the Middle-East, and considering the region he’s from, we’re not surprised to see his V-Trigger involves creating a huge cyclone in the middle of the battlefield.

The Ysaar V-Trigger slowly moves forward once it’s conjured up and damages the opponent if they’re caught in the middle of it. As the whirlwind is out, Rashid can use it to propel his movement on any attack that propels him forward. This could cause some trouble for opponents who are focused more on the cyclone and less on Rashid if played properly. 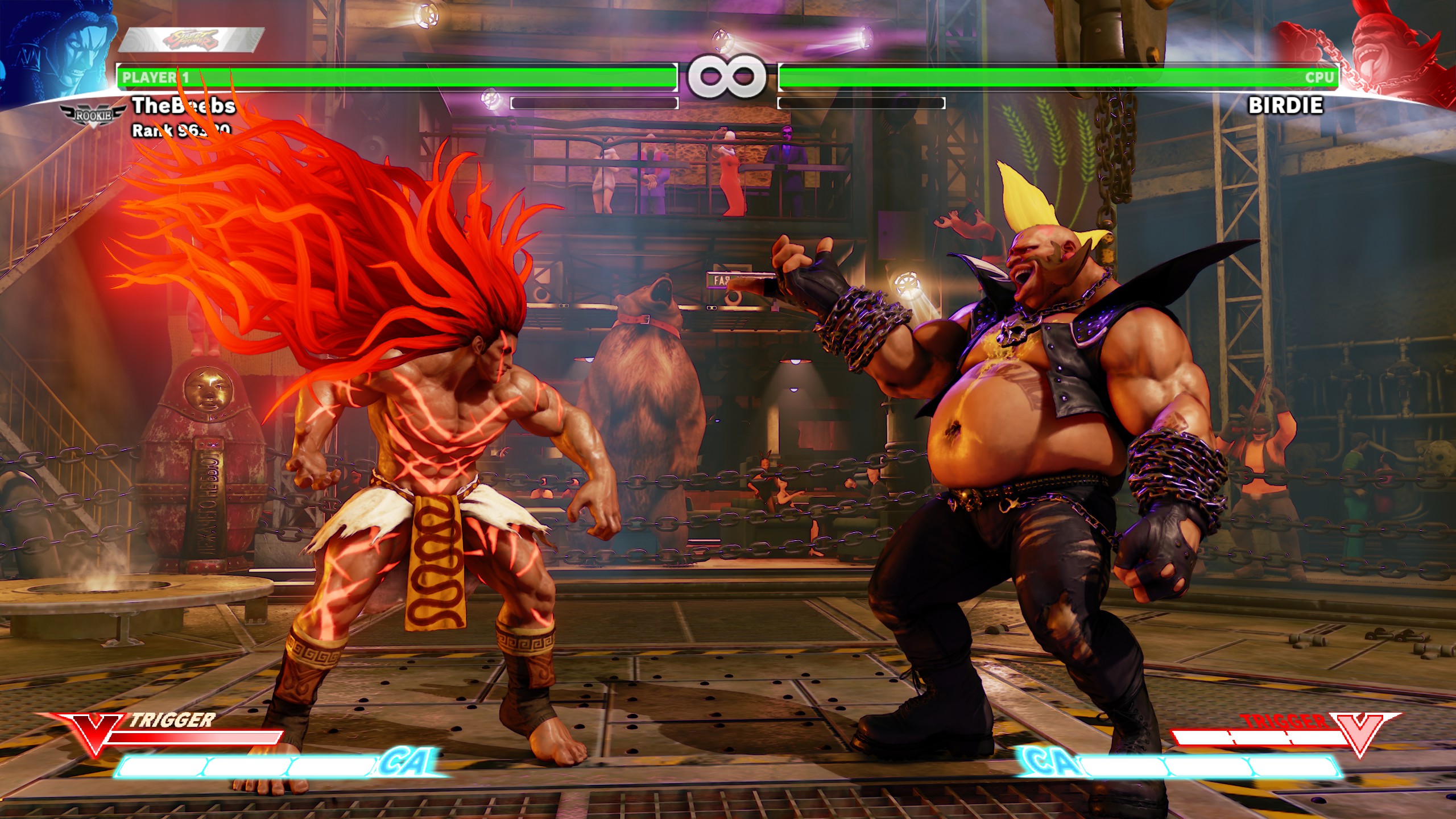 Necalli is all about raw power, and as powerful as he is on his own, his Torrent of Power V-Trigger makes him an even deadlier opponent.

When Necalli taps into his Torrent of Power, Necalli becomes filled with raw energy with both his personality and gameplay changing. All of his standard attacks become more powerful, he gains access to new combos, new frame data, and a new, even more devastating, Critical Art. Torrent of Power doesn’t have a time limit, so one it becomes activated, you’ll be quite the powerhouse. 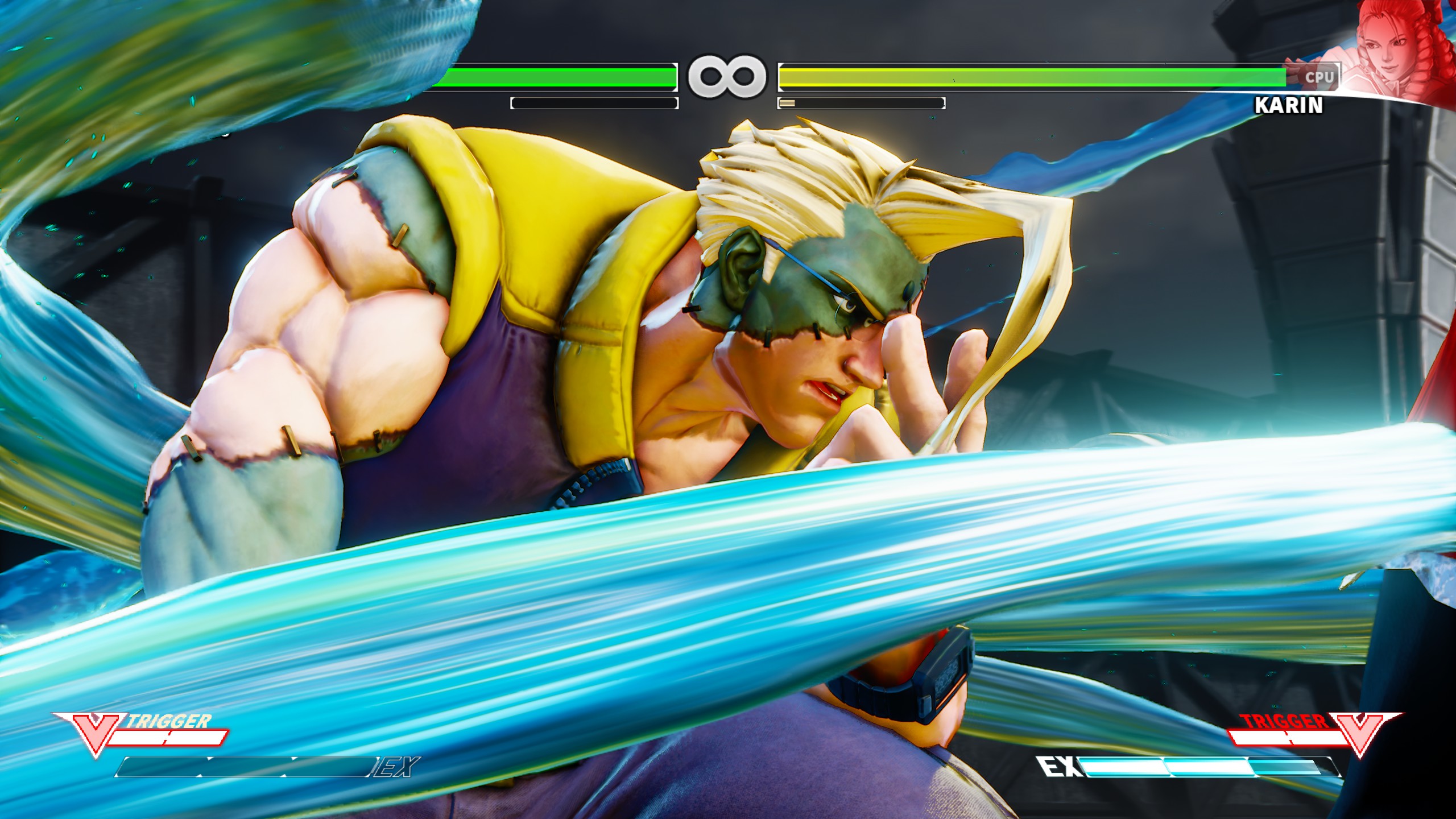 Guile’s bestie Nash borrows many of the iconic fighter’s moves, although his Sonic Move V-Trigger focuses more on speed than it does with throwing projectiles or flipping through the air. 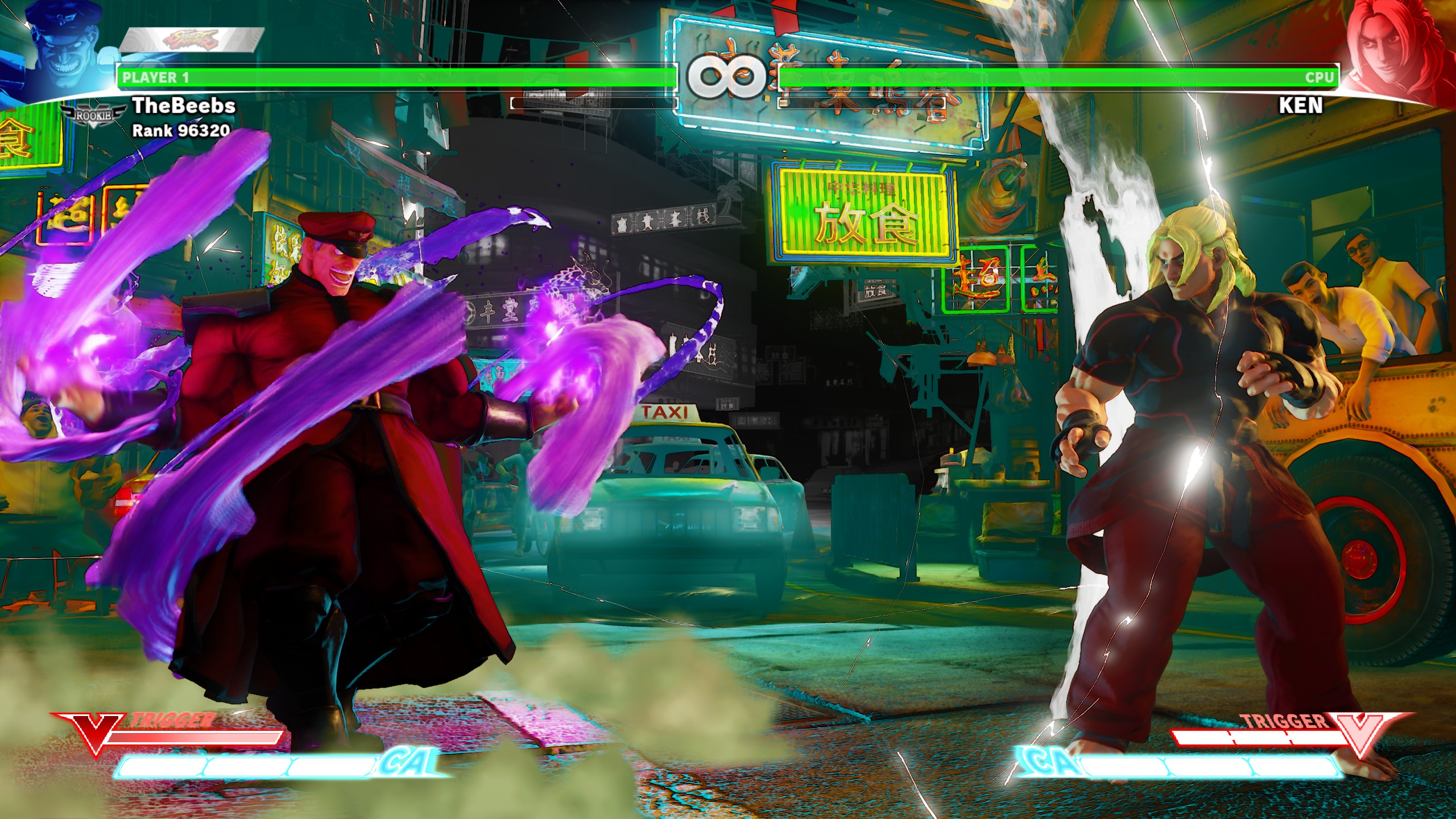 M. Bison and his Psycho Power go hand-in-hand like Birdie and an empty stomach. But in this case, M. Bison’s Psycho Power V-Trigger gives him improved abilities across the board.

When Psycho Power is activated, M. Bison’s teleport dashes now allow him to pass through opponents, both his Somersault Skull Diver and Double Knee Press special attacks allow him to disappear, and he’s also able to chain EX specials. His Devil Reverse special move also allows him to teleport behind opponents in mid-air. 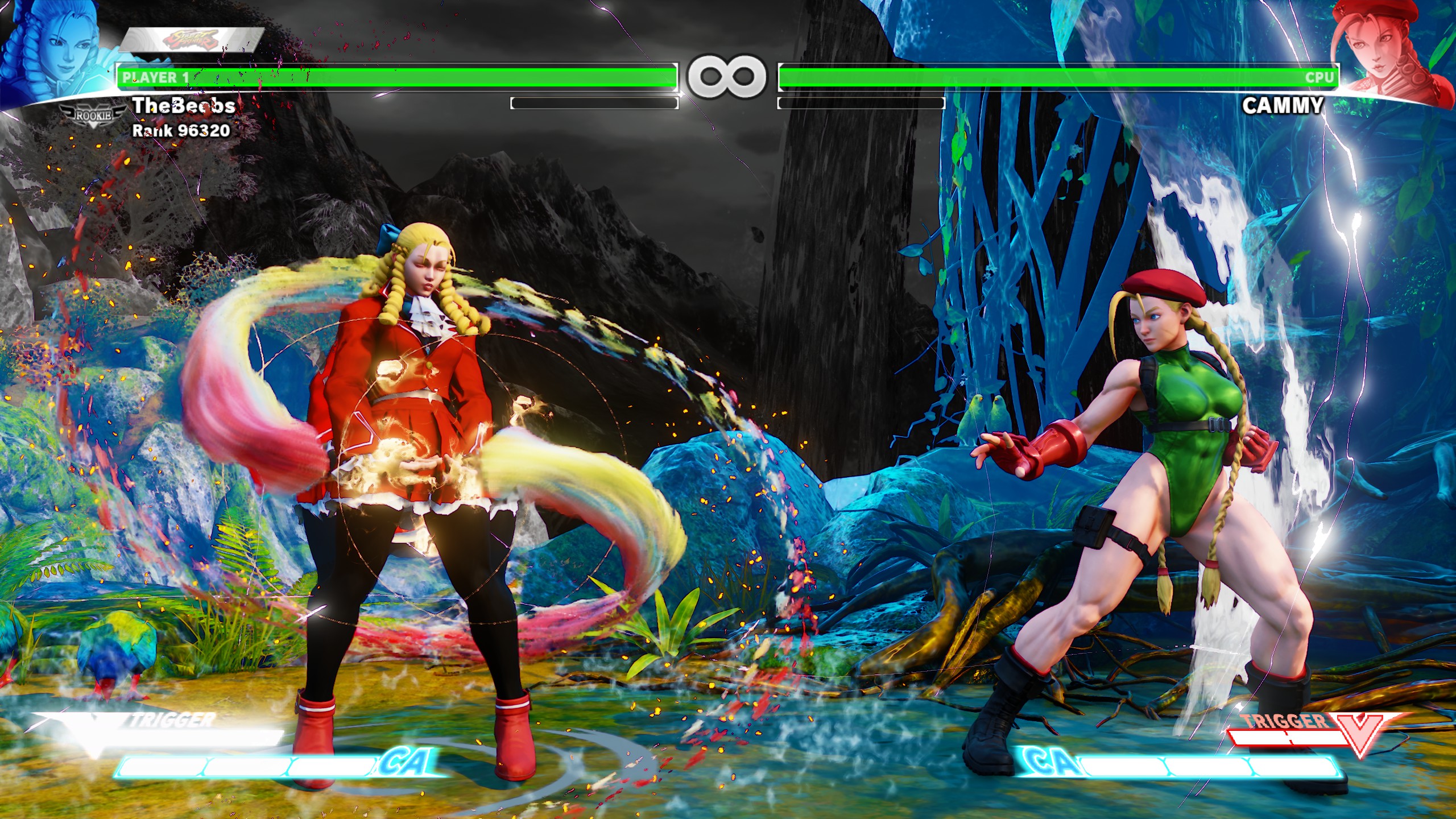 Karin once again appears to be all talk, but her Kanzuki-Ryu Guren no Kata V-Trigger allows her to tap into her true potential by channeling her inner ki, thus giving her access to a bevy of new attacks.

The most important attack that becomes available is the Guren Ken attack, which allows for several different follow up variations. Karin is able to transition from a Guren Ken attack into either an overhead attack, a low sweep, a flying throw, a backdash, and even another quick set of strikes. This allows her to be very flexible in controlling the flow of the fight while her V-Trigger is active. 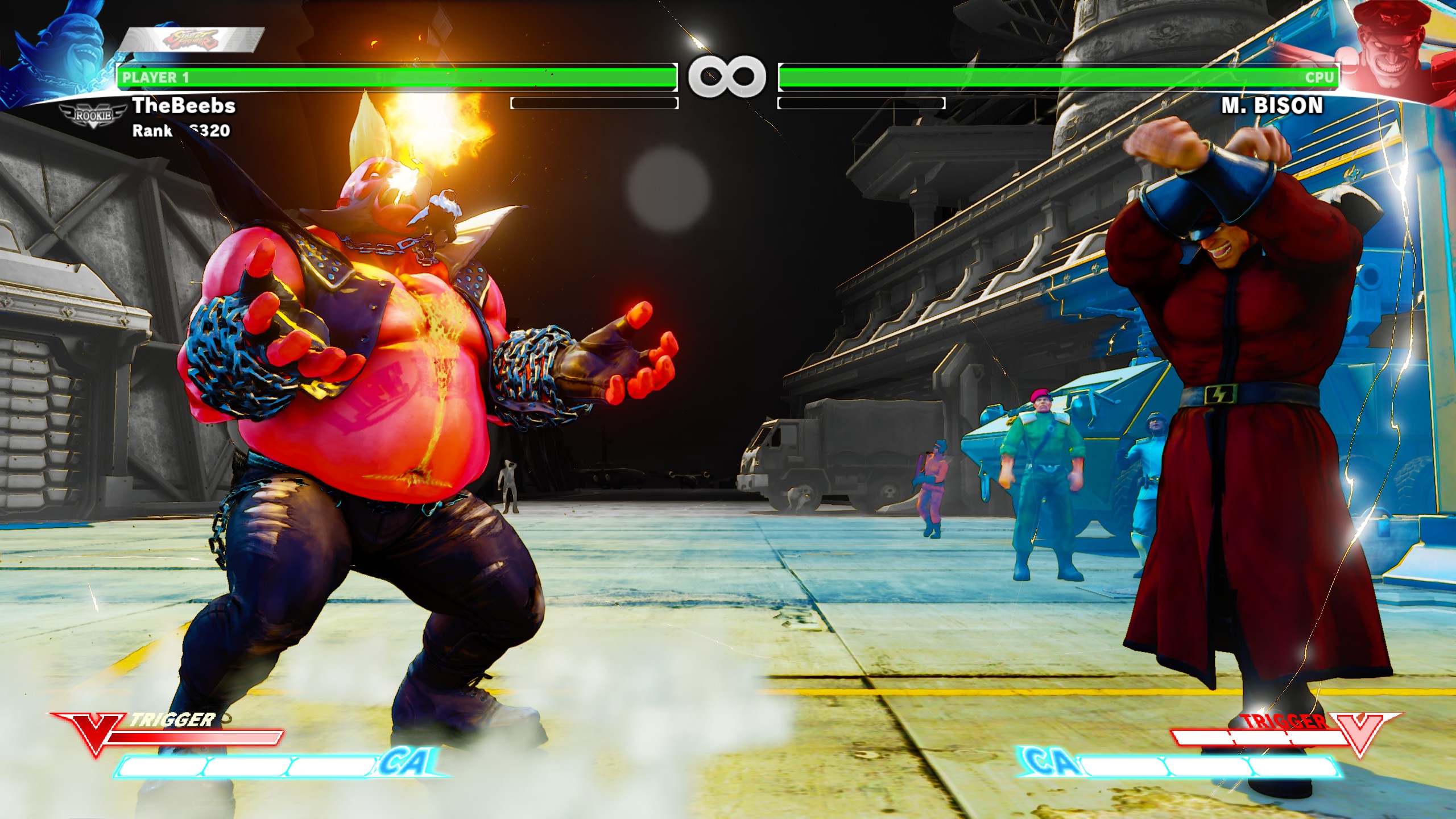 If you’ve run through the various stories in Street Fighter V, then you should know by now Birdie is always looking for something to eat. His Enjoy Time V-Trigger allows him to snack on a pepper, which provides him with increased range of his specials, and adds armor to both his Bull Head and Bull Horn special moves.

In addition to his abilities getting a boost after he eats the Enjoy Time pepper, the burst of fire that shoots out of his mouth at the beginning can hit airborne opponents and can extend combos. 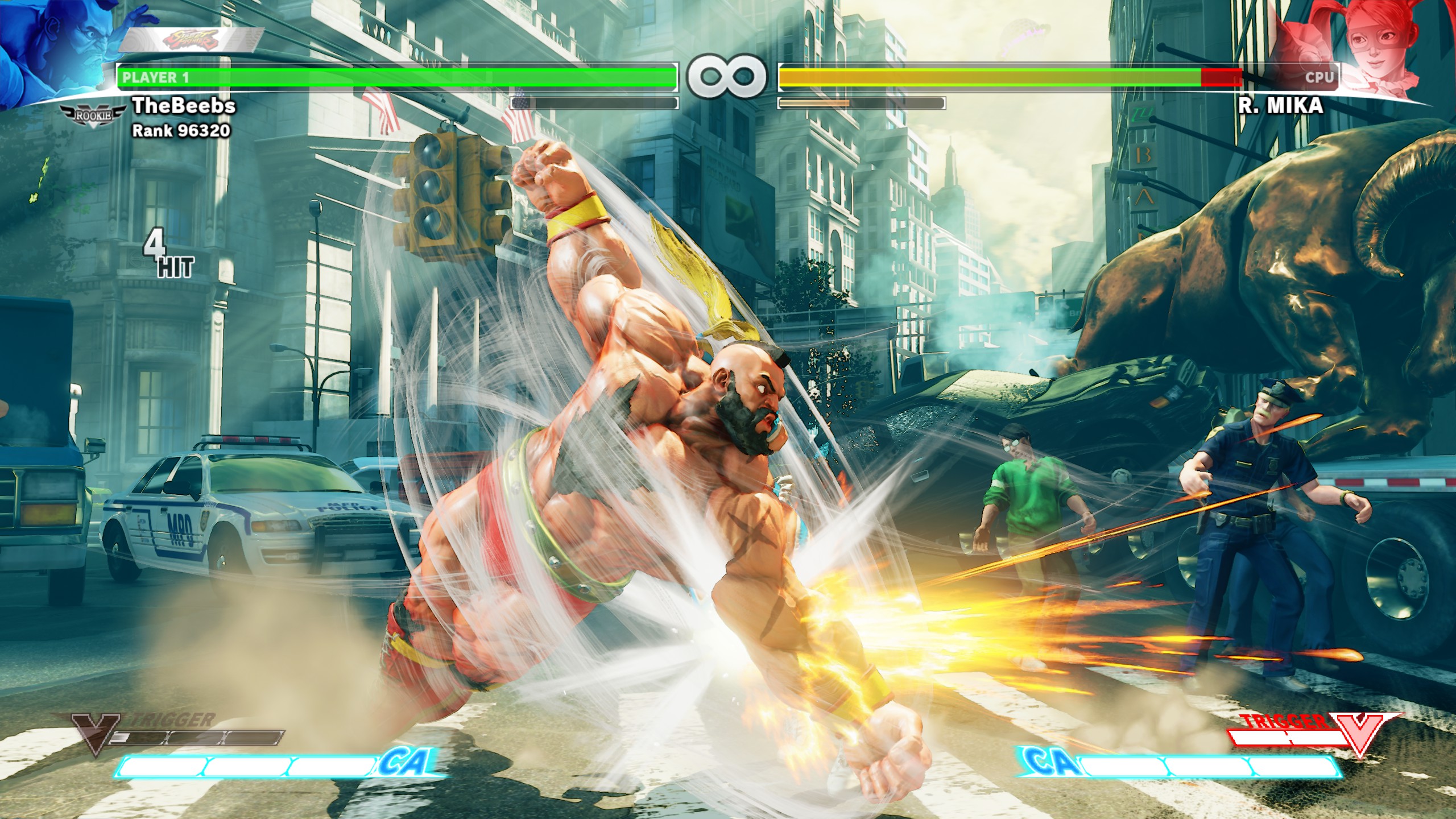 Zangief is an absolute freak of nature when it comes to his physical abilities, but his Cyclone Lariat V-Trigger is just downright creepy as he spins his body around at breakneck speeds as his he stares intently at his opponent.

Aside from the creep factor, the Cyclone Lariat can be used to suck opponents closer to him. If the player taps the V-Trigger buttons (HK + HP), he’ll spin at a quicker pace. If they’re held down, he’ll be able to perform an attack that can land multiple hits. 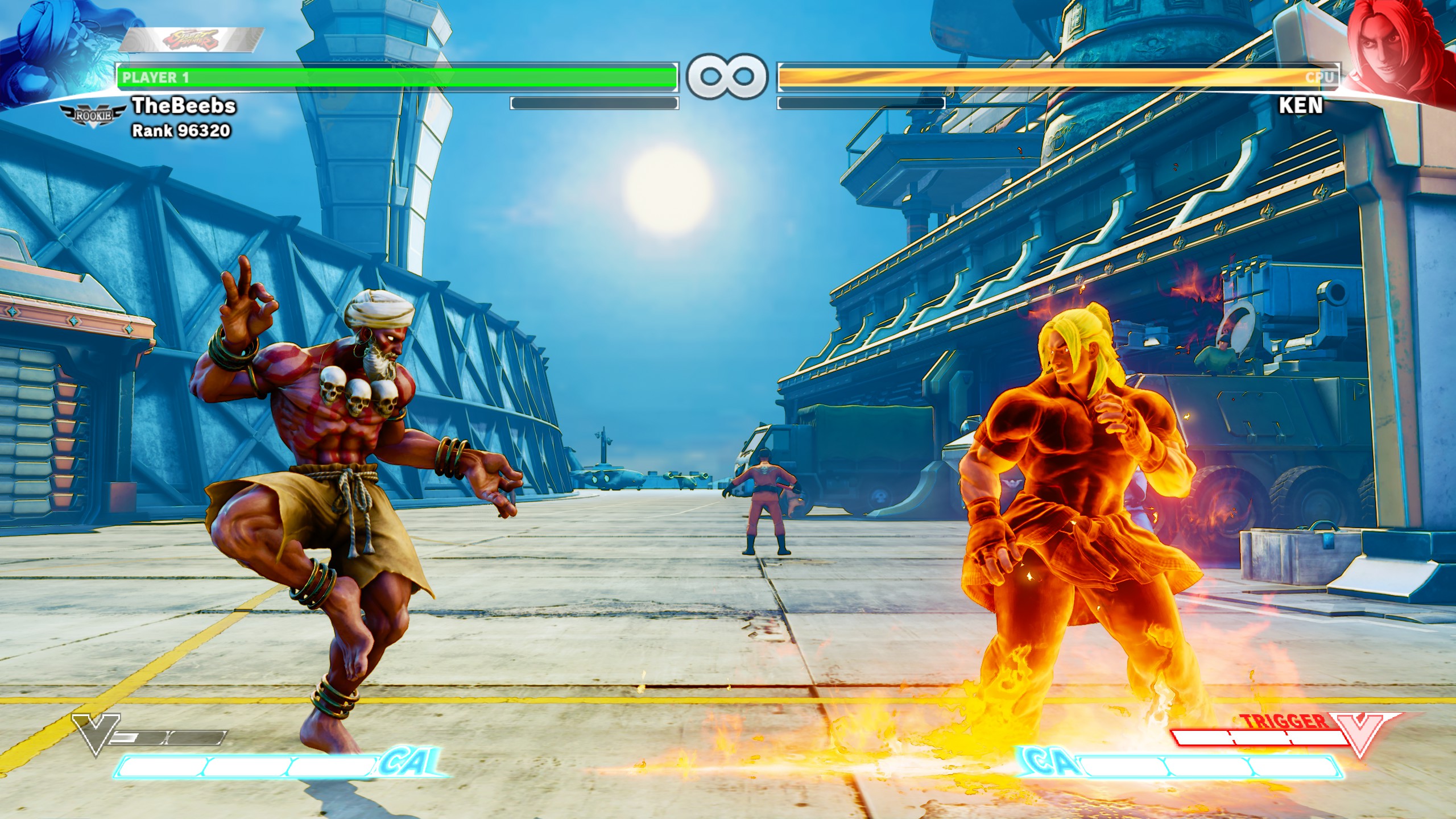 It should come as no surprise that Dhalsim is obsessed with fire. So his Yoga Burner V-Trigger is yet another way for him to burn his enemies to a crisp.

The Yoga Burner can be used to lay down a carpet of flame ahead of him. If his opponent is caught in the flame during the initial hit, they’ll receive damage and knockdown. If the opponent stays within the range of the fire, they’ll take continual damage, although it’s recoverable.

The Brazilian bombshell Laura has entered the Street Fighter 5 ring to show off her abilities in jiu-jitsu, as well as her control over electricity. Her Spark Show V-Trigger kicks up her electrical abilities to another level as she deals more stun on her normal attacks and grabs, is able to farther when using her V-Skill, Linear Movements, and her Thunder Clap projectiles fly farther. 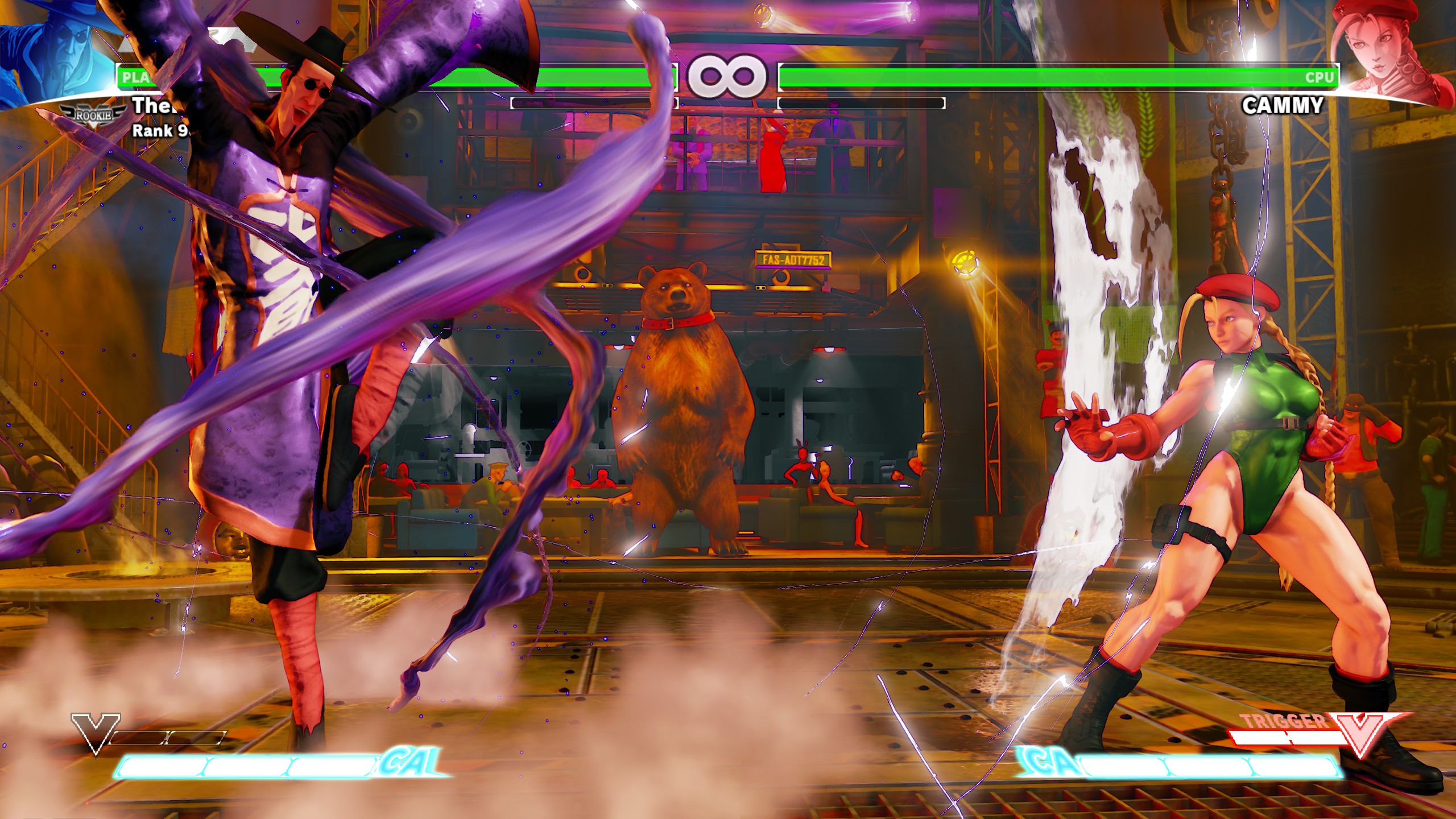 F.A.N.G. is all about the poison arts, and his Dokunomu helps him poison his opponents without even touching them.

When Dokunomu is activated, F.A.N.G. is surrounding by a poisonous cloud which constantly deals damage to his opponent as long as they’re close. We’ve noticed opponents continue to lose health once they come into contact with the poisonous cloud and as long as the V-Trigger remains active.