Hardware manufacturer BenQ is largely known as one of the big names in the PC monitor game. The company's monitors have been used across different PC gaming circles, from casual to competitive. In fact, those that have watched competitive gaming events from MOBAs to fighting games may have noticed BenQ monitors in use. BenQ has built quite a reputation for its monitors, but now the company is looking to expand beyond those horizons.

Shacknews spent the last week at the event and paid the BenQ suite a visit to check out some of the monitors on the horizon. However, there's more than just monitors in the company's future. 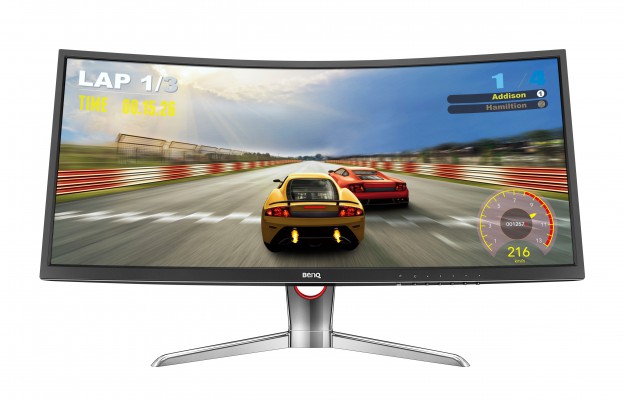 This is being billed at the "curviest" of BenQ's monitors, to date. The XR3501 contains a pronounced 2000R curvature, which the manufacturer says is the most pronounced on the market. It features a 35-inch widescreen, panoramic display, allowing for a 21:9 aspect ratio with a 144Hz refresh rate. As with other BenQ monitors, it focuses on the sharp reduction of blue lighting to help reduce eye strain, maximizing at 70% reduction of the blue light effect. Project CARS was on display to show off just what the monitor is capable of producing. In particular, the California Highway Reserve track appeared flawlessly, with no tears or blurs whatsoever. The monitor's Black eQualizer feature was also on display, reucing the game's dark spots without washing out surrounding colors.

It should be noted that this monitor is more for high-end users that lean towards racing games. While BenQ has built for the professional fighting game circuit, reps on-hand made sure to note that those pros prefer 24" monitors for their games. Racing game fanatics, on the other hand, enjoy the wider field of view, allowing them to take in the landscapes and plan for upcoming turns. BenQ is currently in talks with eSports organizers to potentially bring this monitor to racing leagues in the future.

While this monitor may not be ideal for all types of games, it could help fill a need for those looking for other entertainment experiences. BenQ is also hoping high-definition movie lovers will give the XR3501 a look. This monitor is set to release later this year at $899. 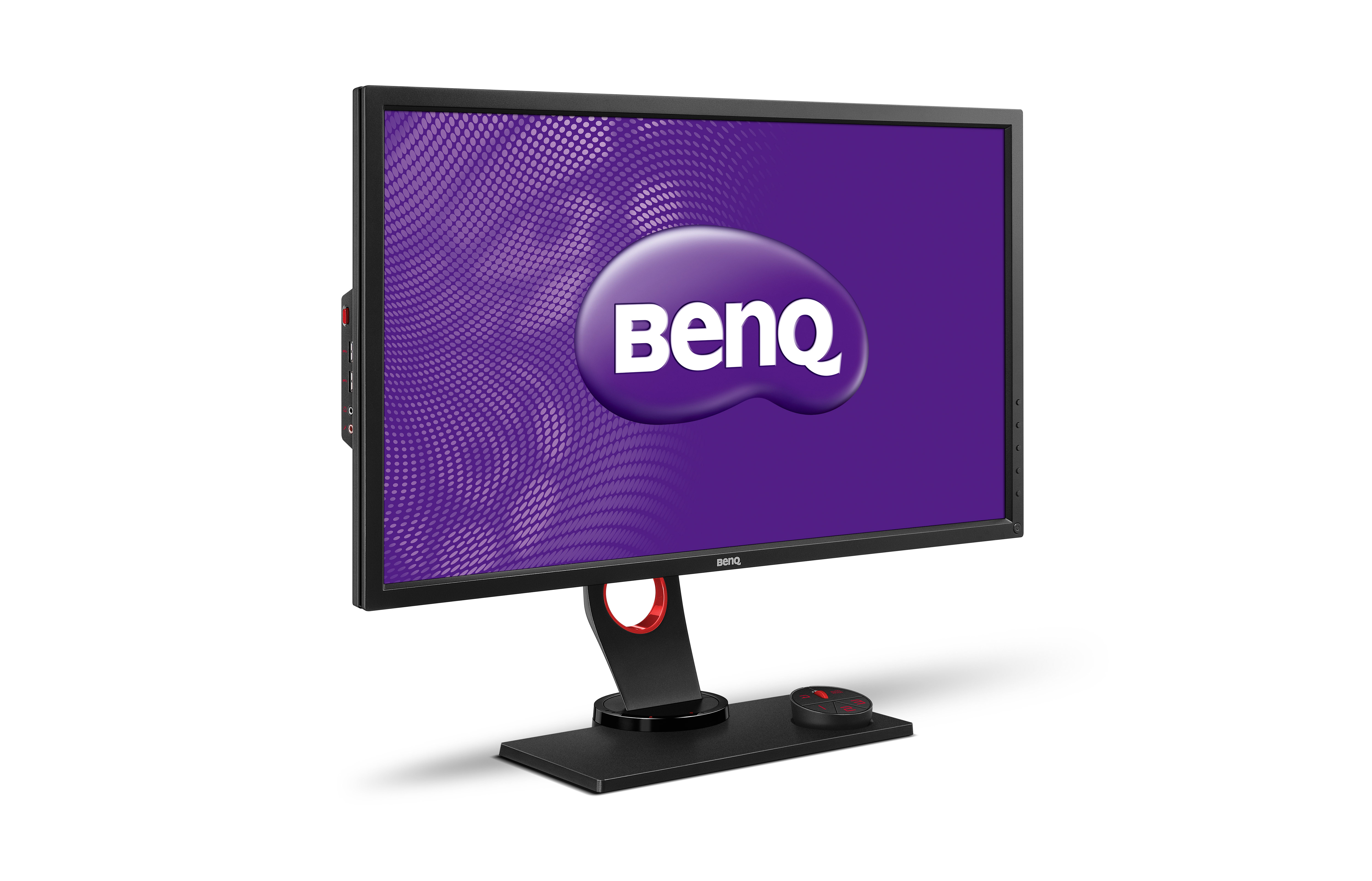 BenQ also showed off the recently-released XL2730, a monitor much more suited to all types of gaming. This 27-inch monitor will feature a QHD (Quad High-Definition) 2560x1440 resolution with a 144Hz refresh rate and a 1ms GTG (gray-to-gray) response time. Its VESA Standard Adaptive-Sync tech allows this monitor to support AMD Freesync, so that anyone packing a supported Radeon card can reap the benefits of reduced screen tearing.

The monitor's high refresh rate meant I couldn't notice any screen tearing, artifacting, or blurring through the full demo. The lack of lag makes it an ideal target for shooter players, especially with the aforementioned Black eQualizer tech at work. There are two different HDMI ports (1.4 and 2.0), along with a DVI and VGA input port for different display settings and a pair of USB 3.0 ports. The S Switch Arc controller allows for multiple profile settings, since not all game settings are created equal, but one of the most impressive aspects of the XL2730Z is the Auto Game Mode setting, allowing the monitor to adjust its settings based on whether the user is playing an FPS, RTS, or MOBA game.

At $799, this is more of a PC gaming status symbol for higher-end rigs, but for those that can afford it, the XL2730Z looks like an impressive piece of work. This monitor is available now. 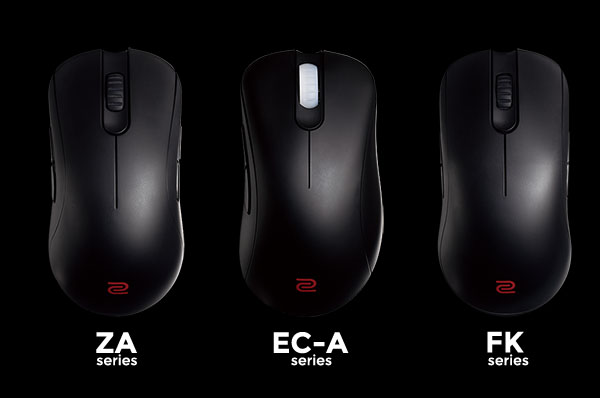 Beyond monitors, BenQ is getting into mice. The manufacturer recently purchased Zowie, a company dedicated to peripherals for the competitive gamer. That acquisition is seeing dividends this year with the release of an all-new mouse line.

Those looking for wild bells and whistles won't find those here. The Zowie mice are designed with simplicity in mind, featuring an intentionally minimalistic design. They're plug-and-play devices, so there's no fumbling around with drivers, while each mouse has a switch at the bottom for sensitivity adjustments.

The main differences between the mice are the sizes and designs. The ZA-Series has a sharp hump near the end, for those looking to use their full palms. The ZA13 coming in small, the ZA12 coming in medium, and the ZA11 coming in the largest size. Meanwhile, the FK-Series is a smaller version of the ZA mice, allowing for more of a claw grip. The FK1 is the larger one, while the FK2 is for smaller hands. The EC-Series is the most impressive of the bunch, especially for right-handed users. This features a sharp curve that feels comfortable when laying your palm on it, with the two side buttons easily reached with no compromise on comfort value.

Users can hold combinations of buttons to set a mouse's DPI and pulling rate, while there are also spare mouse gates available for anyone looking to make any adjustments before jumping into their game. These are decent solutions for those looking to jump into standard genres of games, but those into MOBAs and MMORPGs may need a few more buttons on their mice. They won't necessarily find what they're looking for here.

The driverless Zowie mice hit the market last week, as CES kicked off, and have a $59 MSRP. 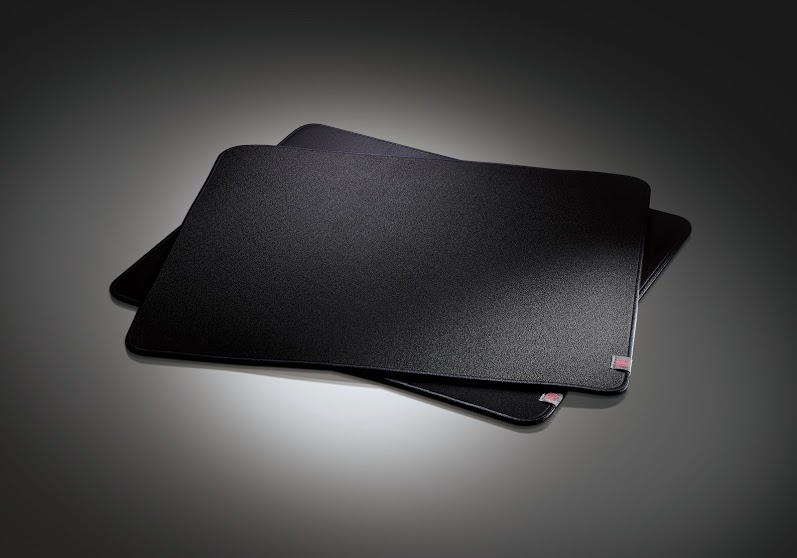 Finally, there's the Zowie line of mouse pads. Mouse pads feel like a dime-a-dozen proposition, but what BenQ was showing off raised a few eyebrows on this end. The SR-Series of mouse pads offers dual material for PC users. The top of the pad is made with cloth, feeling comfortable to the touch, but doesn't lead to excess friction. The bottom of the pad is crafted with rubber and is constructed as a bubble-free base. That means jerking the mouse won't lead to sudden bumps that'll disrupt your aiming or sensitive movement.

The TF-X Series of mouse pads are designed with more of a hybrid of cloth and plastic, for those prefering something a little slicker. However, it also features the rubber base, which stays flat on any surface and doesn't jerk around when you move your hand.

Mouse pads usually feel like throwaway peripherals, but the Zowie line feels like something that a lot of love has gone into. Of course, love isn't always cheap. The smaller P-SR pad runs for $19.99 and on the other end, the higher-tier GTF-X pad goes for $34.99. Those looking for a premium mouse pad may want to give these a look, but these are currently on backorder and will not be available until January 20.

This is just the beginning for BenQ's expansion into other areas of computer gaming. Thanks to the Zowie acquisition, BenQ will be looking into keyboards, headsets, and other areas of PC gaming in the near future. Meanwhile, it will continue plowing away on gaming monitors. Look for more on BenQ's future plans later this year.