Completing Hearthstone's Adventures on Heroic is meant to be a challenge taken only by the toughest and most patient of heroes. But take heart, fellow Explorers. With a little deck editing, you can take them all down, earning your first step towards a special Heroic card back and all the bragging rights that come with it. This week wraps up the League of Explorers, so if you've been following along and tackling the bosses, these are the last obstacles standing between you and the card back: 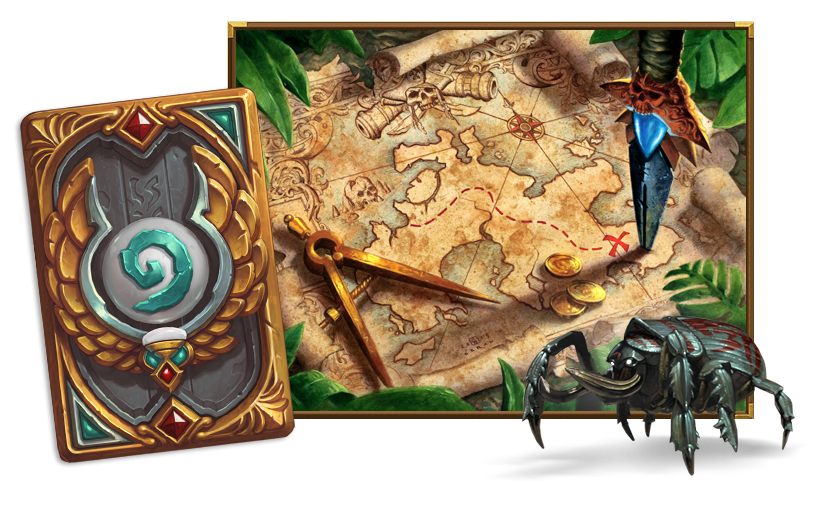 This week: the Hall of Explorers. 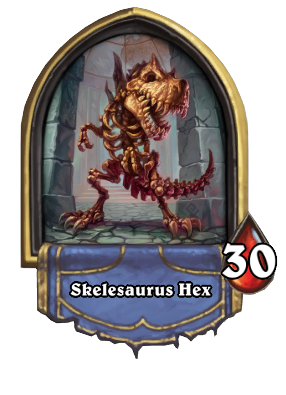 Skelesaurus Hex's Hero Power makes him one of the most random bosses so far, and that quality could make him much easier or harder based on pure luck. You can't really account for the random cards he's going to get to play for absolutely free, so the best you can do is mitigate the risk with some tools until you stabilize.

Paladin lends itself to board control, with tools like the Equality-Consecration combo, and minions like Aldor Peacekeeper, if you have him, Eadric the Pure to lower enemy attacks if Skelesaurus gets the jump on you with big cards too early. As long as you keep control early and establish a board presence in the later game once his free cards are less of an advantage, he's easy to take down. 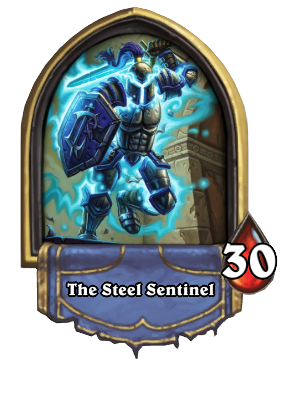 Steel Sentinel is definitely the hardest boss of the set. His Hero Power slows this battle to a crawl, and that goes doubly on Heroic since his minions are insanely well-protected too. In the late-game he starts breaking out minions like North Sea Kraken and Master Jouster, which have lots of health. He picks off your minions until you run out of steam. To make matters worse, if you do get the upper hand, he has two tools for clearing your board: Brawl and Enter the Coliseum.

Your best bet against such insurmountable odds is a Dreadsteed-based Warlock deck. Since you can only do one damage at a time anyway, its low attack isn't a problem. Try to arrange the board in such a way that you can replicate your Dreadsteeds a few times, by running them into enemies after dropping either Baron Rivendare or Kel-Thuzad. If you pull it off correctly, you'll have a board of 6 Dreadsteeds that Steel Sentinel will be powerless to destroy with any of his removal tools. That many minions can pick off anything he drops and then pick away at him with whatever's left. It's a slog, so be ready for a long one.

That said, this battle is likely to last a while, and possibly even go to Fatigue. For that reason you need to pack some healing. Bring along two Antique Healbots. Alternately, you can pair Tournament Medics with Sir Finley Mrrgglton. Getting rid of your card draw mechanic won't hurt you once you have a board of Dreadsteeds, and swapping your Hero Power with another one assures that the Life Tap and healing don't simply cancel each other out. If you get lucky and get the Priest's Hero Power as an option, pick it for double the healing. 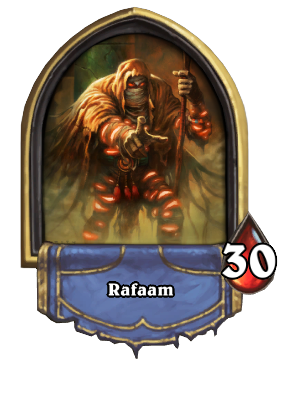 Unstable Portal: Add a random minion to your hand. It costs (3) less.

Arch-Thief Rafaam is true to his name, starting the match by stealing your own deck and forcing you to use a loaner from the League. Unfortunately, the loaner deck isn't very good, consisting of an inconsistent mix that isn't particularly great against any match-up. You can try to stuff your deck with bad cards, but his Unstable Portal ability gives him a constant stream of cards that are usually better, to augment the bad ones you gave him.

So rather than bad cards, try stuffing his deck with useless cards. Rogue has quite a few spells that rely on being combined with other spells or a weapon, or they're functionally dead. Deadly Poison, Blade Fury,and Tinker's Sharpsword Oil will be almost entirely useless, unless he plays Blingtron. In that case, use one of the Acidic Swamp Oozes from the League deck. Since he constantly refreshes his hand with his ability, you can also give him cards like Sprint and Coldlight Oracle to keep his hand full and possibly even burn some cards. Also consider weaker spells like Fan of Knives that aren't entirely useless, but have limited utility other than cycling through his deck.

You should also be sure to aggressively mulligan for the Rare Spear. It's a 1-mana weapon that gains 1/1 every time your opponent plays a Rare card. Just save it until you need it, and Rafaam is likely to power it up for you. Once it starts gaining power and charges you can use it to hit his face or take out big minions with ease. 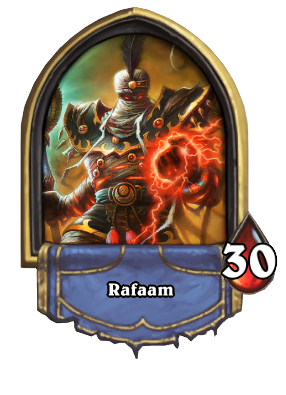 Staff of Origination: Your Hero is immune.

Rafaam's Hero Power is to stay immune for most turns, giving you only an occassional short window of opportunity to do any damage to him. When he is vulnerable, he usually also produces a big boss minion to deal with. The League will warn you when he's about to become vulnerable, so you'll have ample time to put lots of threats on the board.

But believe it or not, who you pick to play as against Rafaam's final form doesn't matter nearly as much as how you play. Starting with the second turn, your Hero Power will change to Rummage, which grants you an overpowered artifact from the League. You should be hitting this button as often as possible, because those tools are usually the best way to deal with Rafaam's overpowered minions--especially in the early game when you don't have big threats of your own. Try to organize your turns around grabbing an artifact with Rummage, playing minions with any leftover mana, and holding onto those spells until they're needed. Once you get the warning that he's about to become vulnerable, you should have a few options for taking care of big threats, and you can bust out minions to deal direct damage.

We recommend Paladin, but you could choose any class that you're comfortable with using for heavy board control. Paladin has lots of tools to take care of threats for all the reasons mentioned in the Skelesaurus Hex entry above. Make sure to pack a Big Game Hunter or two for when the Rummage dice roll doesn't go your way. Also, remember that your Hero Power changes too fast for you to ever touch it. That means that cards that synergize with your Hero Power, like Quartermaster or War Horse Trainer for Paladin, will be dead. Don't waste your deck space on them. However, regular Inspire cards can still be powerful, since you'll be using the Rummage power a lot.

Hearthstone interview: Forged at the Barrens, the Core set, and Classic

How to sign up for the Knockout City crossplay beta