Shacknews is preparing to release its selections for 2015 Game of the Year. Before we get to the staff's selections, Shacknews is taking a look back at the past 12 months in video games, spotlighting a handful of major releases, including a few that readers may perhaps like to include in their own personal GOTY conversations. Next up: July!

July marks the start of the summer doldrums, as publishers ramp up for the fall rush. Yet out of the summer daze, a surprising GOTY contender emerged from indie developer Psyonix. But beyond taking to the pitch with motorized vehicles, players also got a chance to try a different kind of RTS game and check out the start of a new take on an old classic. 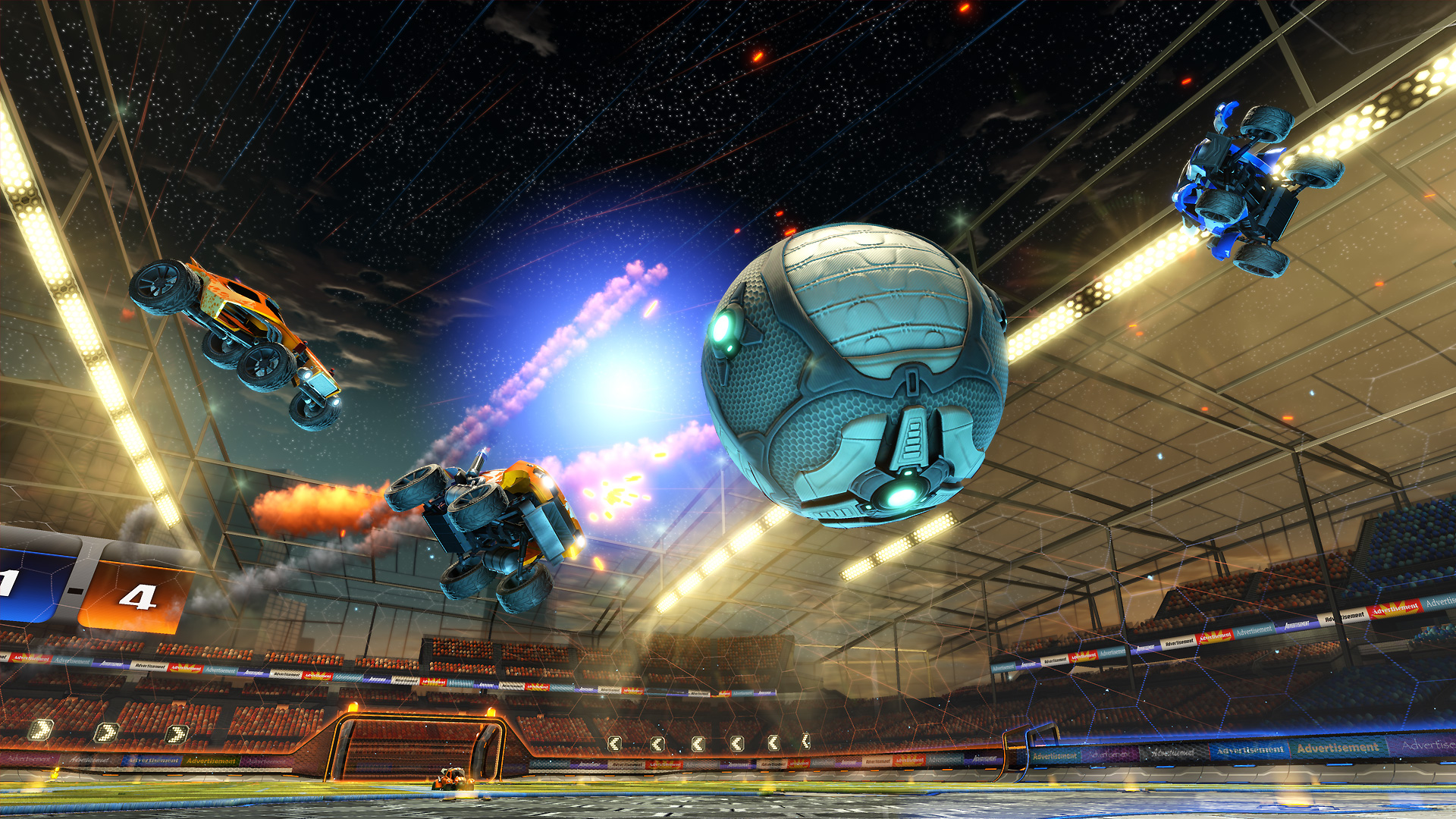 It sounds like such a simple idea. Take the grand old sport of soccer, but play it on a giant pitch with motorized cars. It's so simple, yet Psyonix's Rocket League pulls this premise off so flawlessly that it's still an absolute blast to play, months later. In fact, the fun factor has only grown as time has passed.

Rocket League benefits greatly from simple controls and an even greater simplification of soccer's rules. There are no penalties, no stoppages of play, or even any boundaries. Games go at a breakneck pace and can often be completed in about 10 minutes. And those 10 minutes are often filled with amazing bicycle kicks and circus plays. Add some immense customization depth and Rocket League becomes a game worth re-visiting over and over again.

Sports games only wish they can pull off Rocket League's kind of simplicity with such grace.

From our review: As far as soccer games go, Rocket League stands out as a fantastic alternative to the more serious sports outings out there. The quickened pace and numerous customization options make this game a more intriguing and unconventional multiplayer option, but one that's definitely worth taking onto the pitch. 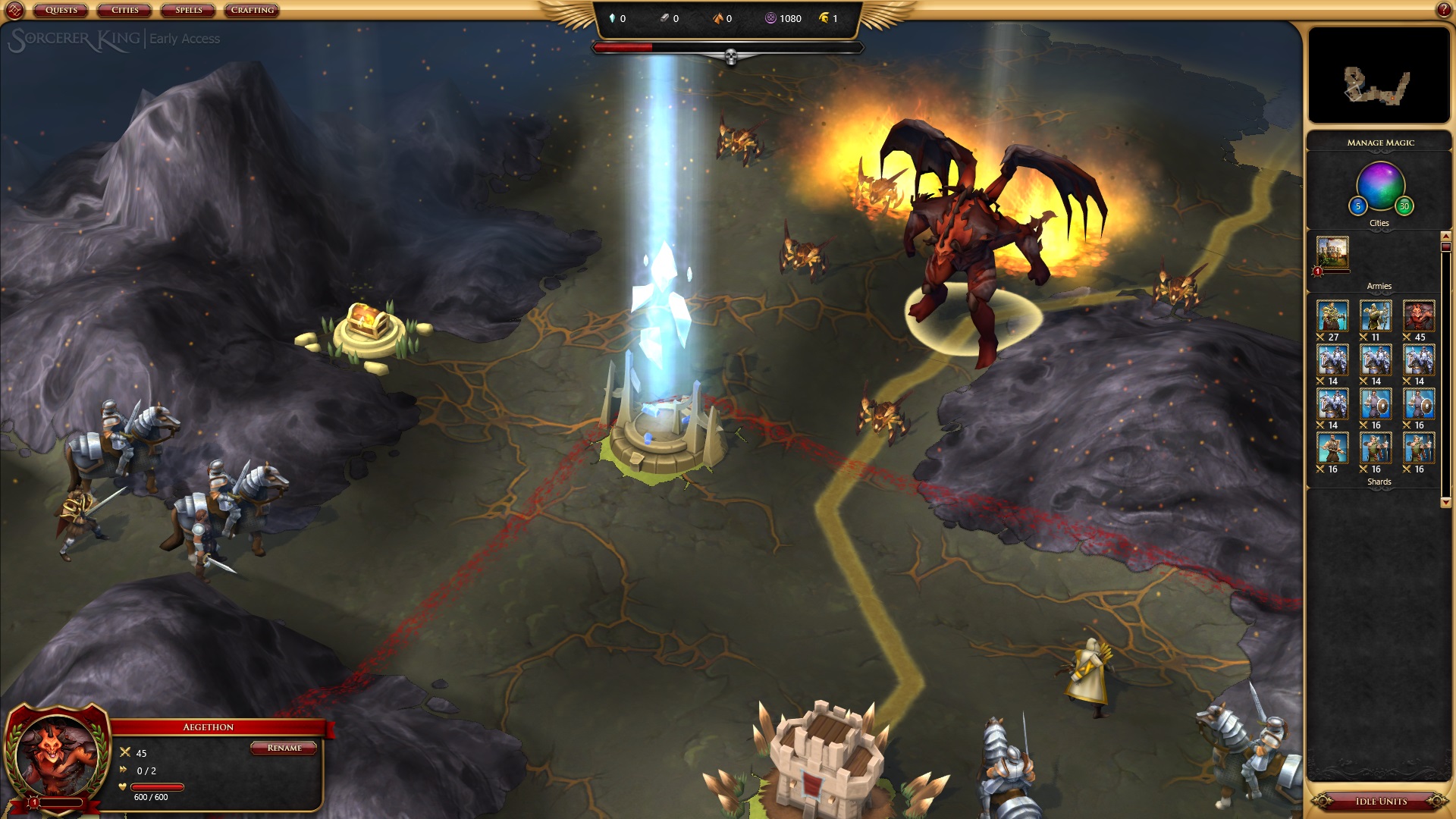 Sorcerer King raises an interesting question to 4X players. What happens if the game starts off with the player already having lost? Stardock's take on the genre sees players jump into a world where a godlike entity has already conquered the world, where the actual premise is to build an empire while gradually taking the fight to the omnipotent monarch ruling the roost.

Sorcerer King nails many of the elements of a good 4X game. Combat is fluid, diplomacy options are available, and there are always new ways to play, thanks to procedurally-generated sessions. Where the game truly sets itself apart is with its Death Clock. While it adds a greater sense of tension, it also adjusts player strategies, as they must also consider the ways in which to help stave off an inevitable demise. It further stresses the importance of alliances, avoiding morally corrupt choices, and even learning to negotiate with the titular Sorcerer King himself.

It's held back by some slow progression and some iffy AI allies, but Sorcerer King is an interesting approach to a tried-and-true genre, making it a nice alternative to straightforward efforts like Sid Meier's Civilization.

From our review: Sorcerer King has a lot of great ideas, but they don't necessarily come together well. Level progression is slow, so losing experienced soldiers is extremely painful. Oftentimes, the game has you wandering the world, trying to complete a vague quest, and hoping that it will bring you closer to defeating the King. All the while, the King starts to get wise to your motives and begins a crackdown. After hours of going back and forth, I couldn't help but wonder if the world was worth the time it took to save it. 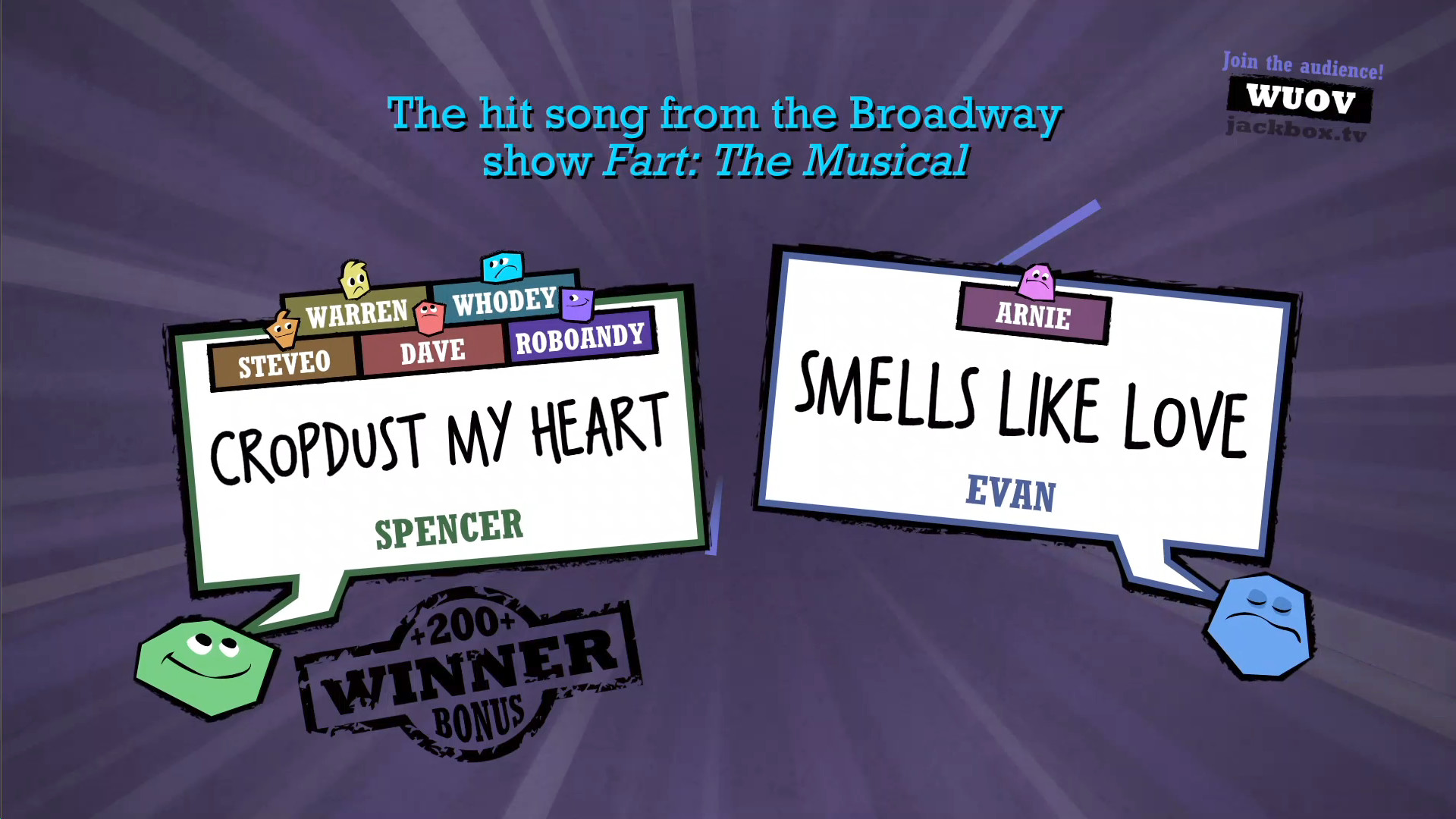 Jackbox Games has returned with its latest oddball party game, but this one doesn't so much rely on questions and answers. Quiplash relies on people and its quality largely depends on how many people are playing.

The rules are simple. All participating players enter a response to a given clue and those players then vote on the best response. The winning response gets points, but the real winners are pretty much everyone, since the result is usually twisted hilarity. And Quiplash amplifies that humor when there are more selections to choose from. Thanks to the ability to log in with a smartphone or a tablet, the game can actually support up to 10,000 players, leading to a sure-fire party every time out.

From our review: Although Quiplash doesn't have the same sort of appeal as trivia games like You Don't Know Jack or Fibbage, there is also no danger of one player memorizing all the answers. The game also comes off as a bit too straightforward unless you can get four or more players involved or a few audience members. Unless you have a very good group of friends playing, it can be a game that's very easy to put down and step away from. Despite some these potential issues, Quiplash ends up being a fun little game that has the potential to liven up get-togethers and parties, but its enjoyment depends entirely on the players involved. 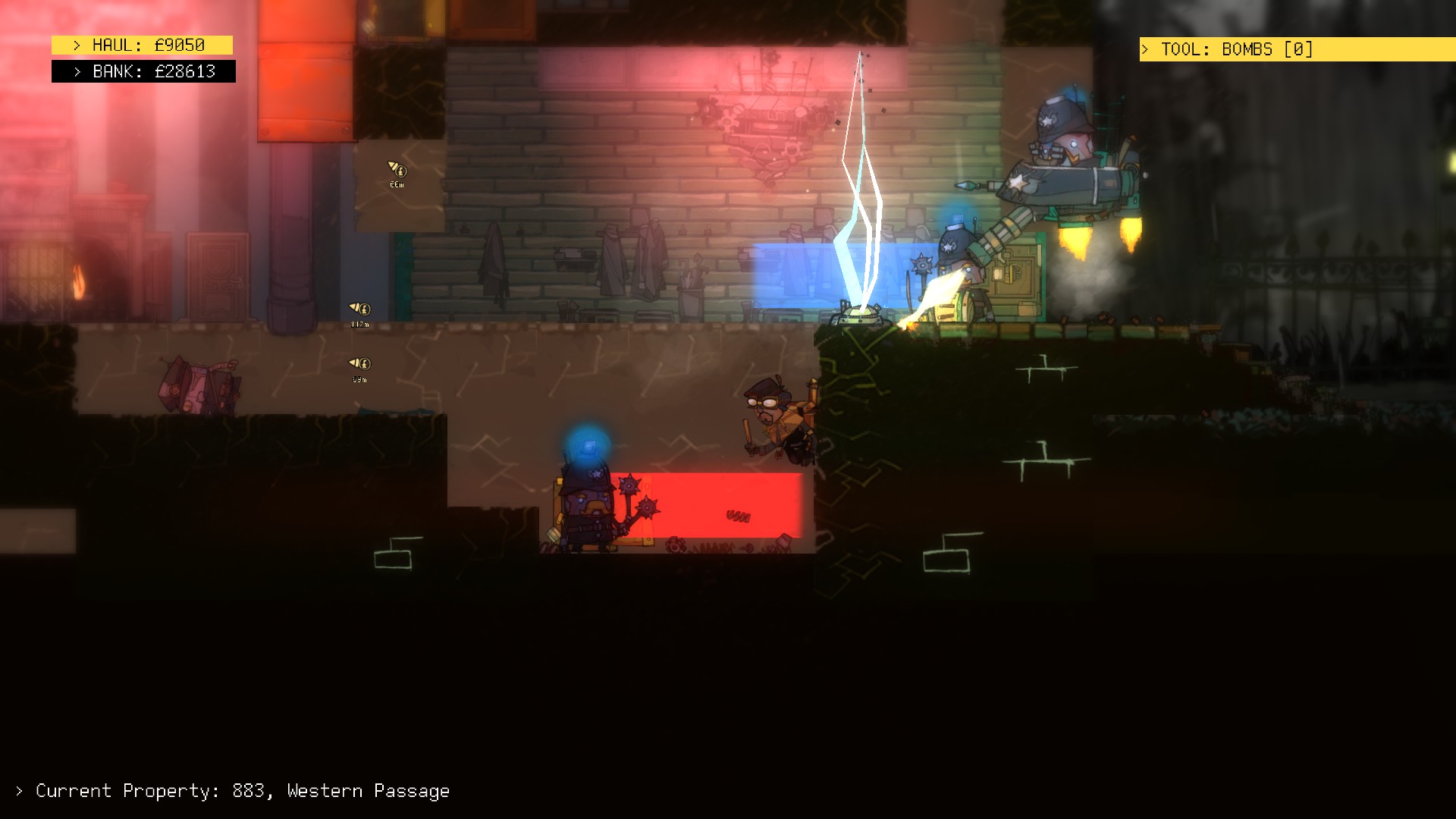 Crime hasn't quite felt as good as it has with The Swindle, with developer Size Five Games offering up a procedurally-generated cyberpunk roguelike. Of course, with games like this, the heist isn't the issue. It's making a clean getaway that's the trick.

Heists are, of course, made easier with certain inventory items and upgrades. In fact, some are downright essential, like the double jump. But that still makes pulling off the perfect crime a satisfying endeavor, especially with the challenge of a new level every session. Mastering perfect escapes isn't going to happen right away, but The Swindle offers enough of a sense of progression to warrant coming back for another score. After all, you'll have to make up for the gains you inevitably end up losing.

From our review: The Swindle is filled with moments of joy, success, and failures. More often than not my deaths were caused by my own mistakes, my own misjudgments, and not by faulty game mechanics. It was the thrill of sneaking into buildings, stealing all the cash I could carry, and getting back out before the police arrived that kept me logging on. The story laid within the game doesn’t drive the game, but that’s okay because there’s plenty of rogue-like goodness waiting to be found inside of Size Five Games procedurally generated steampunk heist simulator.

It's life after Tiger Woods for EA Sports. Rory McIlroy PGA Tour, unfortunately, leaves a lot to be desired, because apparently, Tiger took a lot of his old game modes with him. There is some redemption in the form of the novelty Night Club Challenge mode, offering mini-golf style gameplay. Other than that, EA's latest trip to the course turns out to be stuck in the sand trap.

The days of Sega making a fun platofmer feel like ages ago. So when the publisher can't depend on a hedgehog, it turns to an elephant. Fortunately, Tembo the Badass Elephant (from Pokemon developer Game Freak) turns out to be a fun romp, with an over-the-top hilarious story, some great characters, crisp platforming mechanics, and challenging side-scrolling level design. Tembo hasn't quite gotten the same attention as that blue hedgehog, but he's certainly deserving of a closer look from anyone that's overlooked his debut adventure.

Speaking of crisp platforming, the challenge factor doesn't get much higher than the N series and N++ turns things up several notches. On top of challenging players to complete insanely-difficult 2D puzzles, this new installment also introduces four player co-op to the mix. If these new four-player stages aren't enough, the full level slate from N and N+ is also included, making a definitive package.

Join us at Shacknews as we continue our look through the year 2015, month-by-month. Coming up next, it's time for some football, plus the indies take over again.