When done right, there's nothing more engaging than the party game. And the more players, the greater the chance for fun. In a crowded November of fall blockbusters, it's easy to lose track of a game like Knight Squad, which is making its Xbox One debut and just coming out of Steam Early Access. And while this month will ultimately be remembered for complex gaming endeavors, Knight Squad, from Chainsawesome Games, feels like a simplistic breath of fresh air, even if it does have its share of problems.

Knight Squad sees eight armored combatants duke it out across a number of competitive game modes. Games play out with a top-down view, offering something reminiscent of classic games like Bomberman. Combat simply involves taking your sword and running your opponent through for repeated bouts of one-hit kills. Since respawning happens within seconds, the action rarely slows down. 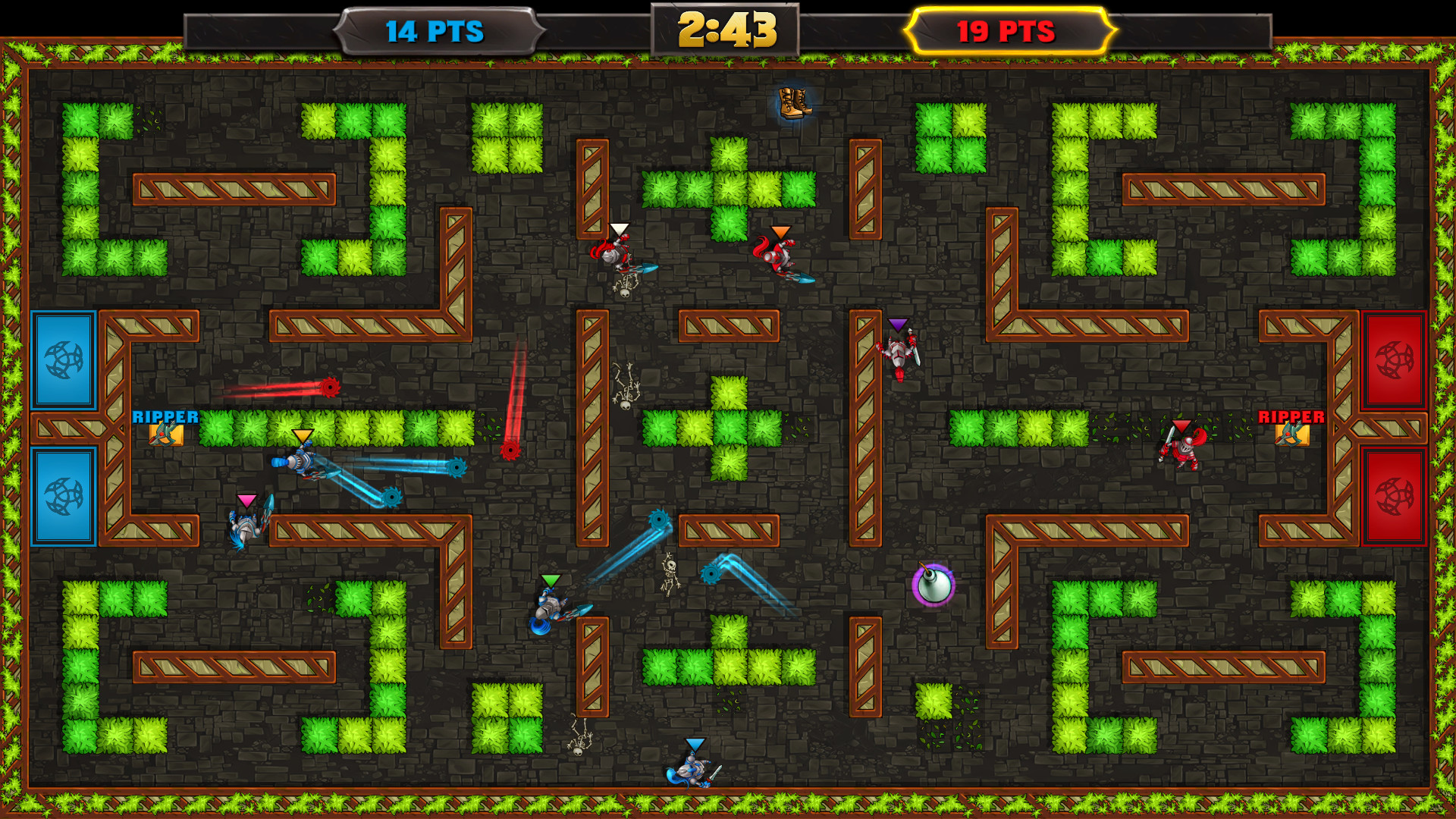 Knight Squad is made interesting by its slew of powerups. Some of them fit the medieval theme, like bow and arrows and horses, but others are delightfully anachronistic, like drills that allow players to break walls or bombs that explode after a couple of seconds. These are often simultaneously game-changers and the source of the game's laughs. If a goal is within reach, it's best to look around and see if anyone grabbed a Lightning Staff or a Minions power-up that summons a horde of undead soldiers to rush opponents.

The other appeal of Knight Squad is in its game modes, some of which are pretty creative. There are standard modes that take advantage of the concept well, but others include some fun variants. Capture the Grail is among the most enjoyable of these modes, which is a free-for-all twist on CTF modes. Players try to earn the most points, but get higher scores for taking a grail at a designated point on the map and successfully bringing it back to their own spawn point. The fights for the grail are wildly entertaining, as they often devolve into just a chain of deaths in a frantic scramble. Likewise, Gladiator is a blast, combining deathmatch with King of the Hill mechanics to reward those that stay within a designated area.

While every knight on-screen is distinguished by their color in free-for-all matches, things get a little more confusing in team modes, since everyone is decked out in either blue or red team garb. The only way to tell who's who is by the icon above a person's head, but because of the game's fast-paced nature, it's easy to lose track of your own character. It takes some fun out of what's otherwise some fun team modes, like Capture the Flag or even Soccer. Sprinkle in occasional lag and it makes even harder to tell what's happening and where everyone is.

The other issue comes with finding online sessions. For the Xbox One, in particular, there seems to be no way to search for specific online matches when playing with the public, so clients are at the mercy of whatever the host chooses. Don't like a particular map or mode? Sorry, there's no way to set search parameters. You get what you get. Fortunately, there are a couple of offline modes available, the most appealing of which is local play with both humans and bots. There are also some single-player challenges, but they feel uninspired compared to the fun of the main multiplayer modes.

Knight Squad suffers from a couple of problems, but overall, it's good for what it is. It's a way to get friends together to slash them to ribbons and, barring that, it's a quick way to kill some time in the online space. The armor's not entirely polished in places, like with sporadic matchmaking issues and some noticeably long load times in place. Fortunately, the sword is steady enough to do a fairly decent job.

This review is based on an Xbox One code purchased by the reviewer. Knight Squad is available now on Xbox One and PC for $19.99. The game is not rated by the ESRB.