Double Fine's Tim Schafer on Day of the Tentacle Remastered: 'It was kind of now or never'

IndieCade 2015 has been a showcase for some of the most prolific ideas in independent gaming. But while the festival is a grand showcase for the great games of the future, for Double Fine, it also represented a chance to jump back into the past. It was a chance for festival goers to jump back into the golden age of adventure gaming, as it was the first chance to go hands-on with Day of the Tentacle Remastered.

Shacknews recently went hands-on with the game during the festival, but as it turned out, we had only just scratched the surface of what makes this remaster so special. There were a couple of elements that we actually hadn't noticed during our initial playthrough and there was no better person to help show us what we had missed than Double Fine's Tim Schafer, who sat down with this writer in the PlayStation tent. It's here that he recounted the tale of how Double Fine was given the opportunity to revisit this adventure game classic from 1993. 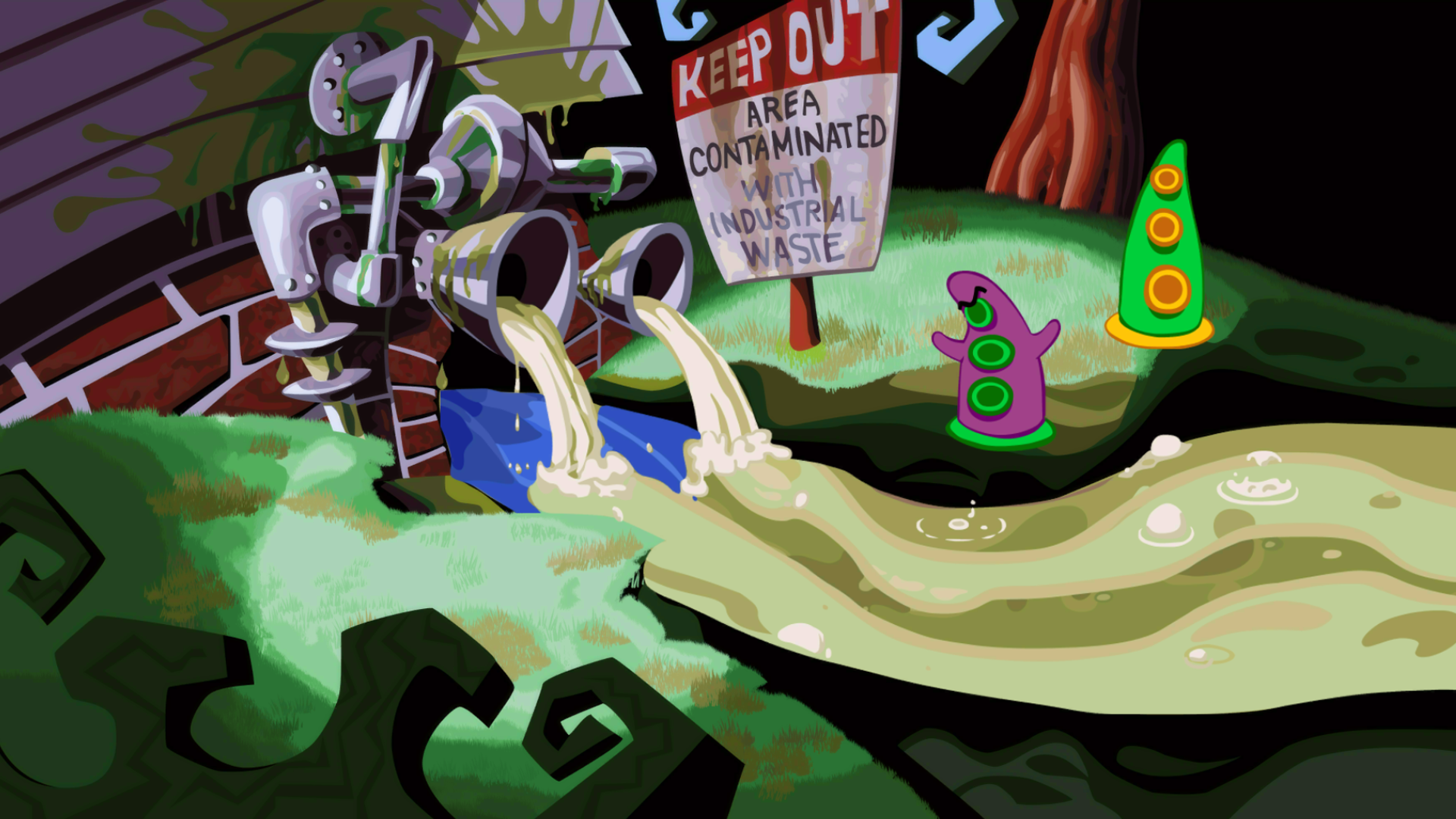 "A lot of this started back with Grim Fandango," Schafer told Shacknews. "We found out there was some fans of Grim Fandango at Disney and Sony and that was the only reason why it happened. There were some people that were real advocates of the golden age of adventure games from LucasArts that wanted to see it happen. Between those three companies, we figured out a way to strike the first deal. And when we struck the Grim deal, that turned out really well, so the next logical thing, as far as I was concerned, was Day of the Tentacle."

What precisely made Day of the Tentacle the next logical step? Many of the reasons are the variety one would expect. It was a pure puzzle-solving game. It wasn't bogged down by drawn-out cutscenes or long traveling sequences. The game's puzzles were its main focus. However, there was another major reason that now was the time for a Day of the Tentacle remaster. That's because Schafer recognized that the time for such a project was rapidly running short.

"It just felt like this was the right time to do it, because there's a window I felt was kind of closing," Schafer explained. "All the people who worked on it were still in the industry. The archives, we knew where they were. In a few more years, I don't really know what would have happened. That stuff could have been lost, so it was kind of now or never. We really believe in having the original creators of the original game do the remasters." 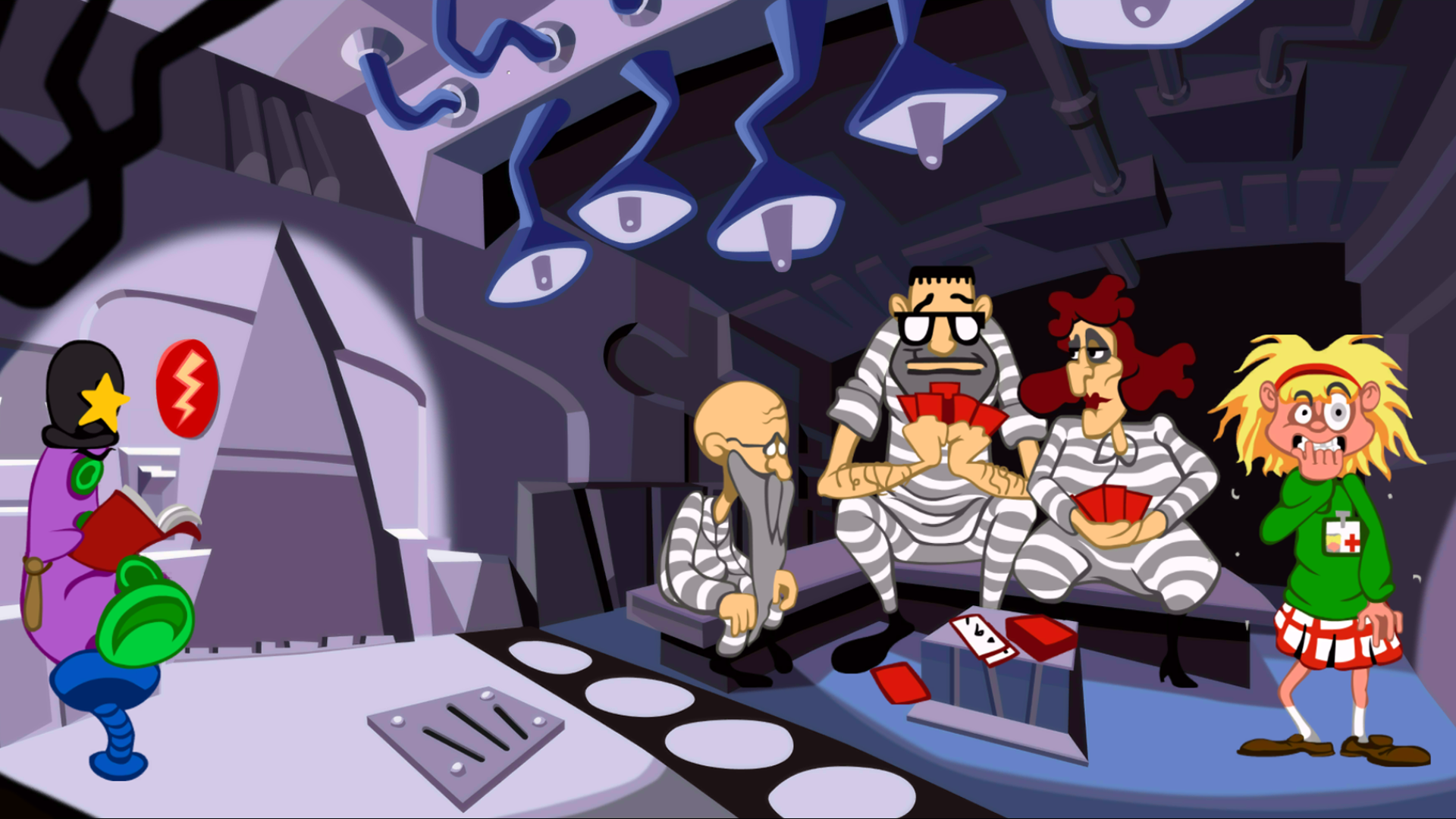 As we were surrounded by spectators wandering the tent, with even a few stopping for an occasional autograph from Schafer, we briefly discussed the game's art style and how it remains close to the original 1993 effort. This is where the Double Fine founder pointed to a button that I hadn't actually paid attention to during our hands-on from earlier this weekend. The Touch Pad button on the Dualshock 4 would actually switch the visual style from the widescreen, higher-resolution animation to the vintage 1993 graphics. The differences are immediately noticeable, with vintage textures looking noticeably jagged and lower-fidelity than their remastered counterparts. On top of that, the original 1993 user interface was also available, as Schafer noted that the team had worked extensively on this area of the game.

"We did a whole new interface pass on it," Schafer added. "The remastered version has the more modern interface that you will recognize a little bit from Broken Age, with the tabs coming out. But also, a verb dial that you saw in 'Grim,' where the verbs are arranged around the point of interest. You can play that way if you want or when you're playing with the old graphics, you can use the verb bar."

Schafer then demonstrated that it was fully possible to mix and match elements of the vintage game and the remaster. For example, Schafer showed off the 1993 visual style with the newer verb dial. He then switched over to the remastered widescreen graphics, but placed it over the 1993 user interface. As evidenced in the photo taken below, players can use whichever element of the game's two versions suits them best. 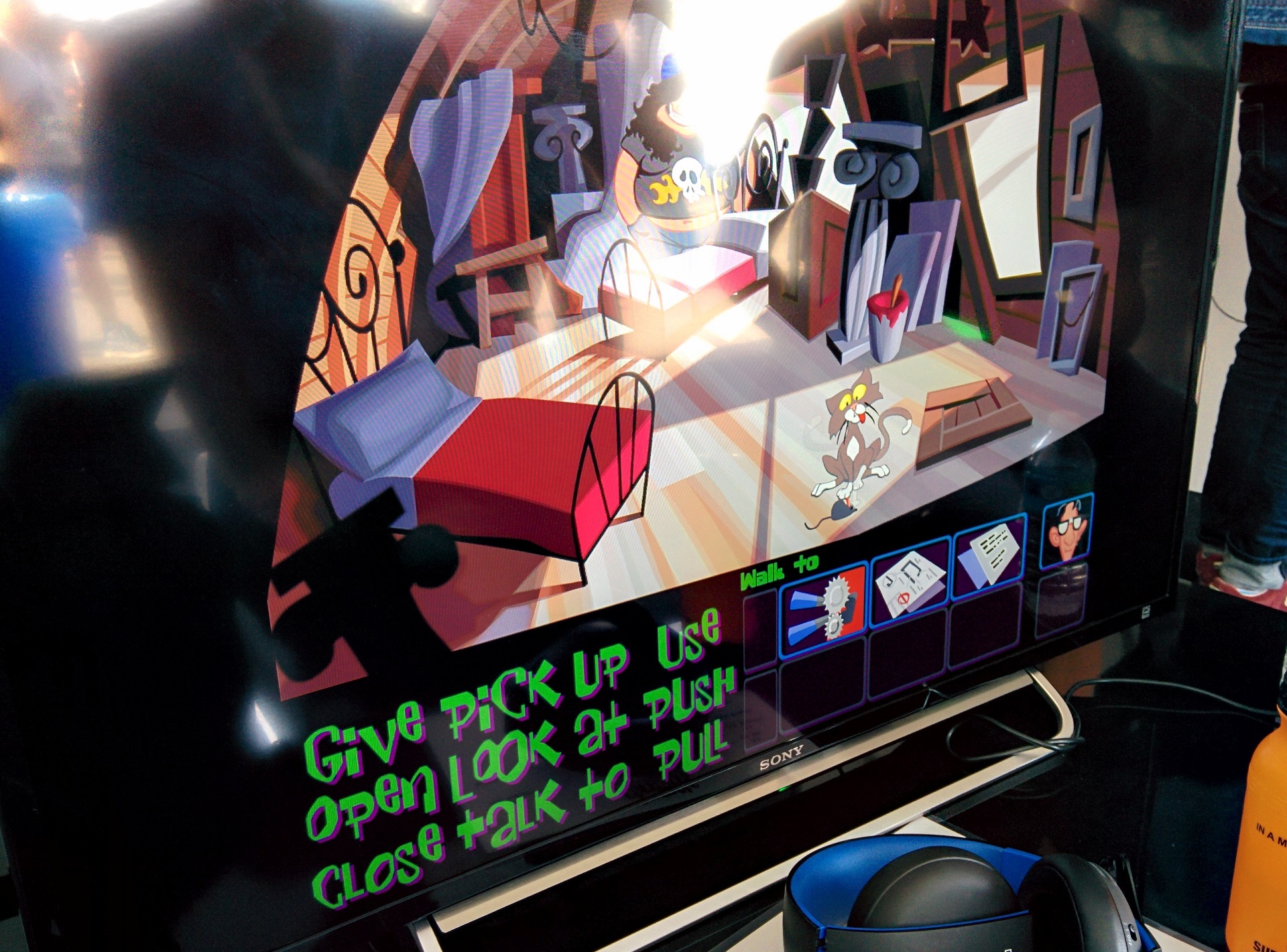 Visuals and interface aren't the only elements that have received an overhaul. The audio sounded noticeably clearer during my time with the game, leading to the impression that either the voice actors had returned to reprise their roles or there were some uncanny soundalikes. As it turns out, neither was the case.

"These are all the original voice recordings," Schafer pointed out. "We went back and found the original tapes and recordings from our archives and re-edited all the voices. It's all uncompressed and it's all in its original fidelity."

It's remarkable to see how much effort Double Fine has put together in remastering a great LucasArts classic, with Schafer and Double Fine VP of Development Matt Hansen noting that over 100 backgrounds and 10,000 frames of animation needed to be repainted for this project. With Grim Fandango and Day of the Tentacle both having happy endings, in terms of developer rights issues being resolved, it felt natural to ask if the rest of the classic LucasArts catalog was potentially on the table for the remaster treatment.

"We'll see how it goes," Schafer answered. "There's definitely one more, my game, that I'd like to see. But I believe that the original creators should do the remasters. So if we were gonna do something like one of the other games, it would only be if the original creator wanted to work on it with us."

Day of the Tentacle Remastered is looking to release in 2016 on PlayStation 4 and Vita, with Schafer also noting that PC and Mac versions are also in the works.