Heroes of the Storm: Battlefield of Eternity Tips

The never ending battle between the High Heavens and the Burning Hells is waged on the fields of the Battlefield of Eternity map. At the center of this two-lane map is an arena where the angel lieutenant Illarian is locked in combat with the demon lord Beleth. The two immortals fight each other with relentless ferocity, but it's the forces on either side of the Nexus who will determine the battle. 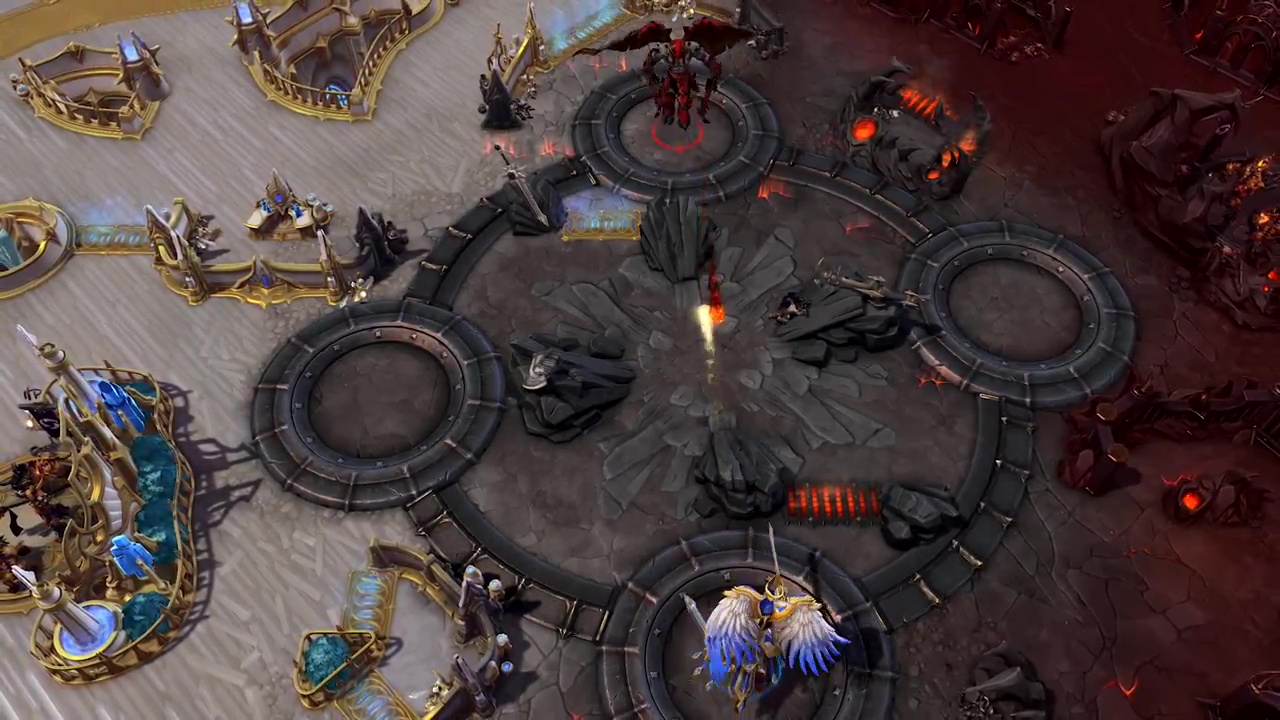 The Immortals don't start fighting until shortly after the match begins. In that time, both teams have a lot of decisions to make. They can either play the lanes to gain experience, or gather in the center to support their faction's Immortal. You need to decide whether you need to focus your attention on the lanes or the Immortals, or divide your forces to cover both. Every little bit of damage you do to the opposing Immortal could mean the difference between victory and defeat.

Immortals won't idly stand by while Heroes pummel on them. They will summon five circles that will explode, stunning and damaging any Heroes caught in them. The Immortals may also perform a spin attack that will knock back, damage and stun all Heroes in its radius.

Defeating an enemy Immortal is a major score for the prevailing side. The winning Immortal will absorb energies from the fallen enemy and channel it into a shield. Then it will head to one of the lanes (usually the most fortified one) and attack everything in its path. Although the shield's power depends on how much health the Immortal had remaining after the combat phase, it has immense destructive power and will attack your fortifications like a force of nature. Even high level Heroes may have trouble holding back its march forward.

Traveling in the Lanes 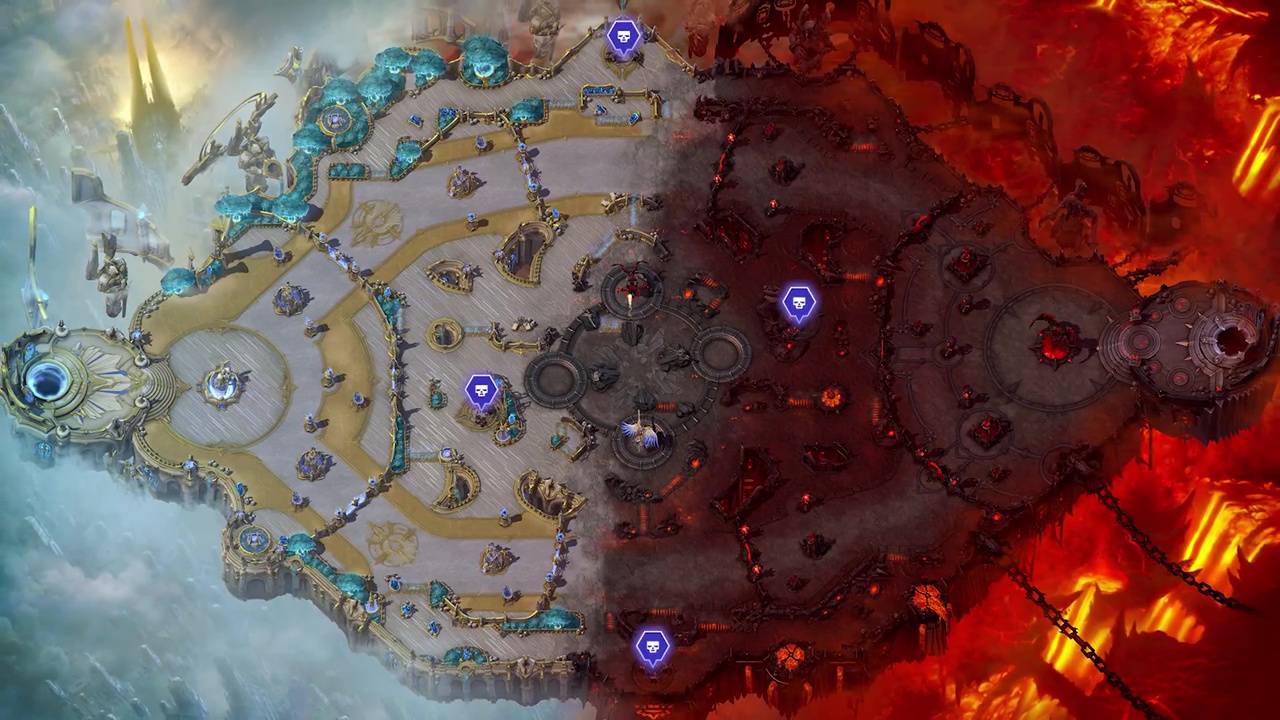 One way to get around the Immortal rampage is to quickly make your way across one of the lanes. Fighting in the lanes will earn experience for your team, thereby unlocking new abilities to battle enemies with. Perhaps more importantly, gaining strength will enable you to seek out and exploit the mercenary camps.

There are four mercenary camps spread out across the map. The center has two Bruiser camps, each with a Fallen Shaman and two Hounds. Always target the Shaman first, because it will relentlessly summon new hounds as they are destroyed.

Siege mercenaries can be found on the north and south ends of the map, populated by Khazra Impalers. These Goatmen will throw spears from a distance and will concentrate fire on one target at a time. They also have bonus damage against structures, and have a surprisingly fast firing rate. 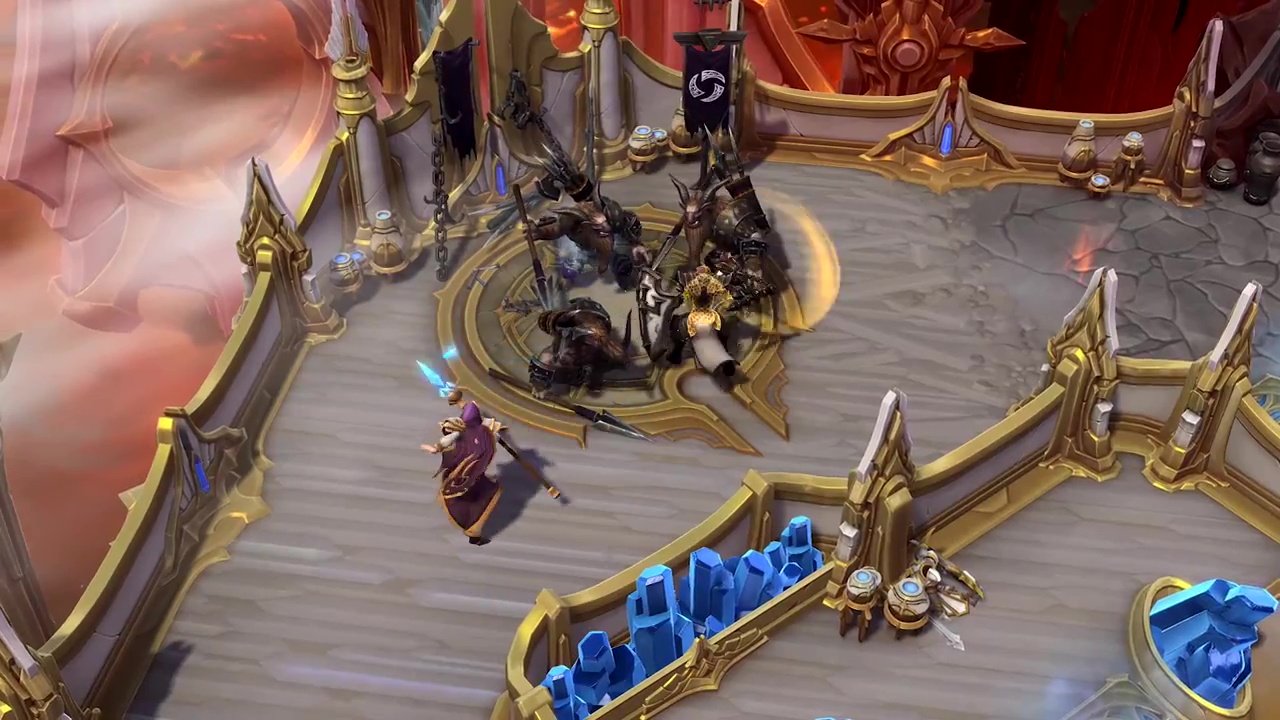 Knocking on Heaven or Hell's Door: The map may have only two lanes, but there are doors at the center, near the Immortals' battle area. Its defensive towers are behind it, but getting past them makes for the most direct route to your enemy's core. Unfortunately, since this door isn't on a lane, you won't have any minions around to draw fire away from you. It's a high risk move, though might end up with big rewards.

Watch the Fight: Immortals will intermittently try to stun attackers with area attacks. Keep a close eye on these events, and try to take out opposing heroes while they're stunned. That way, you'll both help out your Immortal and gain experience at the same time.

Backing Your Immortal: Traveling down a lane alongside an Immortal is like walking in a street parade alongside your own WMD. If you can afford to take people off defense, combine your firepower with that of the Immortal's.

Last Minute Hire: Add some mercenary support if you can. You'll need to have some Heroes break off and take on a Mercenary camp as the Immortal's fight nears its end. The timing can be a little tricky, since you'll need to start the Mercenary battle before the Immortal fight ends in order to prevent the camp from vanishing. Then you must win while your Immortal walks down the lane. If you want the Mercenaries to fight alongside the Immortal, pick the camp that's associated with the most defended lane. Even if the Immortal ends up on the lane opposite of your Mercenary, that just means that your foes will have to fight the battle from two fronts.

The Fallen Shaman's hounds are ideal for drawing tower fire away from your Immortal, thereby extending the use of its shield. Alternatively, the Khazra Goatmen are great for adding on to your Immortal's formidable firepower so that it can destroy structures quickly, leaving it time to damage opposing heroes. Either Mercenary may work out if you find yourself playing on the defensive.