Today is Force Friday, a grand celebration in a series of them for Star Wars fans in 2015. It's a day in which new Star Wars memorabilia, toys, and collectibles will be unveiled, but for video game enthusiasts, their big day isn't coming until November when Star Wars Battlefront arrives on PC and next-gen consoles. Shacknews has previously offered hands-on looks at the game's co-op Survival mode, from more than one perspective, in fact. But if that's the game's undercard, then this year's GameStop Expo provided an opportunity to jump into the main event. It was time to try out the large 20v20 Walker Assault multiplayer mode.

While shooters have generally aimed for eliminating the opposing team as a primary objective, Battlefront is looking to throw a far greater Star Wars twist into the proceedings. For Walker Assault, the main objective varies for both sides. There are a pair of giant AT-AT walkers heading towards the Rebel base on Hoth. For the Imperials, the object is to escort these walkers safely, while the Rebels must eliminate the giant mechanical beasts before time runs out. 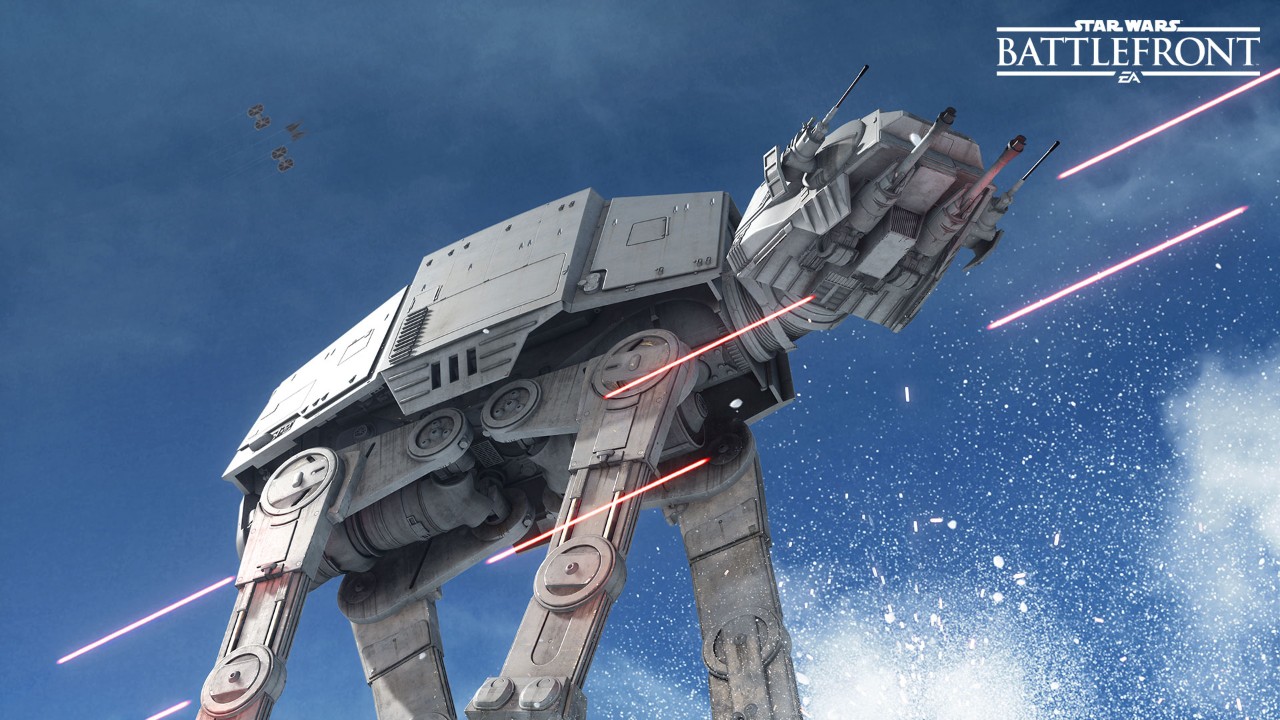 The first thing to notice about Hoth is that the map is massive. It's a wide open snowy tundra, where the natural terrain can sometimes work to offer cover or a stealthy route towards enemies. However, it's also filled with trenches, valuable for getting out from under fire. And there will be plenty of blaster fire.

That's because Star Wars Battlefront does not operate on standard military ammo. Blasters don't have a finite amount of shots, but rather can overheat if overused. So trigger-happy soldiers must learn to be a little more conservative with their shooting pace. Blaster bolts will reach crazy distances and while there are dedicated long-range weapons, the standard blaster will sometimes grant some lucky hits from long sniper rifle-like range. But don't look for people to overly abuse this idea, since Battlefront doesn't offer aim down sights.

When players aren't firing, they're looking for power-up icons placed throughout the map. This can help spawn in some helpful gadgets, like thermal detonators, but can also work towards summoning vehicles. For Imperials, they can jump into a TIE Fighter cockpit or a heavy-hitting AT-ST. It's even possible to eventually get into the AT-AT itself and mow down hapless Rebels. Rebels can get a chance to jump into their vehicle arsenal, like a trusty X-Wing or the helpful Snowspeeder that houses the much-needed tow cable that can bring the AT-ATs crashing to the ground.

Aside from doing things the old movie way, Rebels can complete objectives related to nearby Uplink stations that can summon Y-Wing bombing runs. That'll cue up the classic Star Wars music score and signal that the AT-ATs are vulnerable to all player fire, but completing the walker destruction is not an easy job. There's only a short window to fire and unless players are ready to fire away with rockets or the like, they won't make much of a dent. This writer eventually got into one of the several turret stations that were stationed among the Rebel defenses, which allowed a clear shot at pesky AT-STs. Unfortunately, like the rest of the game's weapons in general, aiming can be troublesome. In this instance, I was able to make no contact with an ememy TIE Fighter. That person was likewise unable to make contact with me, so he simply kamikaze'd into the turret, taking us both out. Near the end of the game, I was able to sneak into an unattended turret and get a clear shot at an AT-AT, knocking it down to about one-quarter of its health, but by then, it was too late and the Imperials had completed their objective.

Walker Assault doesn't feel like most of the standard multiplayer shooter modes I've played to death, but more importantly, Battlefront is feeling like a different kind of shooter. It feels a lot more wide open and the massive setting makes this mode feel more epic in scale. Power-up icons on the field are also a nice touch and provide something else to fight over. Whether the other maps can maintain this same kind of feel remains to be seen, but Hoth was definitely a great place for EA and DICE to start.

Star Wars Battlefront is set to hit PC, Xbox One, and PlayStation 4 on November 17, but look for the beta to kick off in October.