Metal Gear Solid 5: The Phantom Pain is releasing this week on the Xbox One, PlayStation 4, and PC. But it appears PC gamers are getting the short end of the stick as its physical retail version only has a Steam installer burned onto the Blu-ray disc.

Twitter users graphure tweeted out their findings yesterday that shows the Blu-ray disc containing nothing more than a Steam installer weighing in at 8.78 MB. This means those who were hoping to have the game fully installed shortly after they pop in their retail disc will have to wait to download all 28 gigs. 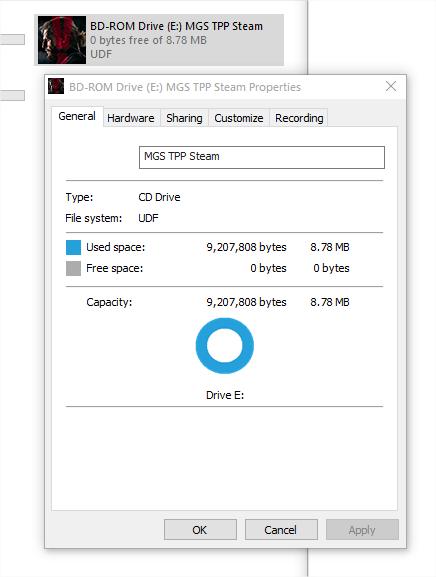 While those with fast and reliable broadband connections may see this as a minor inconvenience, those with less-reliable Internet connections, or have tiered Internet, should be rightfully upset by Konami’s offering. A Blu-ray disc can hold 50GB of data, so Konami could have easily included all of the files for MGS5: TPP on the disc. Why it decided to burn a Steam installer on a Blu-ray disc is beyond us.

We’ve reached out to Konami to learn more about it’s decision to include a Steam installer on the PC version of the game and will proceed to update this story accordingly.