Hearthstone's next big expansion, The Grand Tournament, is finally here. While your success in the tourney will be partly decided by the fate of which random cards you score while opening packs, the card game's crafting system does let you make your own must-haves. Shacknews has put together this list as a guide for which cards are most likely to give you the competitive edge, and which can be safely turned to dust without missing out.

Crafting cards in Hearthstone takes varying amounts of Arcane Dust: 40 for Common, 100 for Rare, 400 for Epic, and 1600 for Legendary. We've listed the rarity and dust cost for each of these staples so you can budget your dust accordingly. Most of these are recommended based on their versatility in several different decks and classes, but a few of the class-specific cards are so good they come highly recommended too. 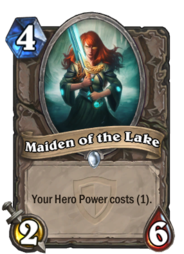 With decent stats for the cost and a powerful effect, Maiden of the Lake is going to be a must-have for Inspire decks. It makes your Hero Power much more cost-effective for activating Inspire effects. Note that it reduces the cost to one, rather than reducing the cost by one, so having two on the board won't give you any additional effect. That means packing two in your deck will probably be unnecessary. 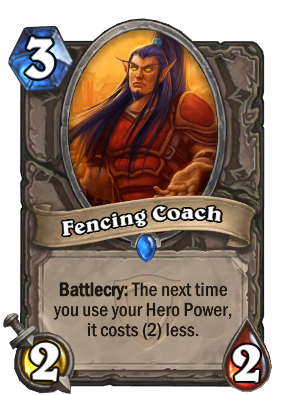 Many of the new Inspire cards have powerful effects, but come at a severe cost to their stats. If you played on-curve, as soon as its mana cost allowed, you would have to just hope it survives. Otherwise, you'd have to play it two turns later and use your Hero Power immediately, costing you even more tempo. Enter the Fencing Coach, a card destined to be a staple in Inspire decks. Since his effect applies to your next Hero Power no matter when you use it, you can drop him a turn before you intend to get Inspire value, and then get the Inspire effect for free. It's a must-have for TGT-based decks, and if you plan on making heavy use of Inspire, you may even want to craft two. 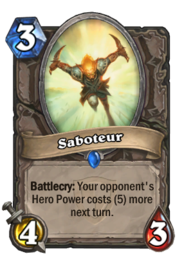 Fencing Coach's counter-measure is the Saboteur, which effectively prevents your opponent from using the Inspire effect for a turn. This can be just the thing you need to stymie a big incoming effect, especially if you see it coming from a Fencing Coach. However, since this card is so precisely made to counter Inspire decks, you may just want to craft one. Two could be overkill unless Inspire decks begin to run rampant. 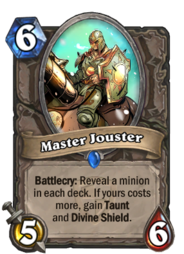 This is a solid mid-range card with an effect that seems aimed at stifling those ever-popular aggro decks. Since you're more likely to win a Joust against an aggressively low-costed deck, throwing up a big taunt with Divine Shield is just the thing you need. At the very worst it's a Silence target that still leaves you with a hulking 5/6 to deal with. 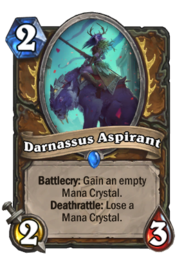 Easily one of the most interesting and powerful new cards, Druid gets this huge tempo swing. You get a Wild Growth packed in with a minion. That Deathrattle may seem extreme, but even if your opponent triggers it immediately you simply go back to being on-tempo as usual. It's also a perfect counter for the Mage's Mirror Entity spell, since they'd have to suffer the Deathrattle without the beneficial Battlecry. 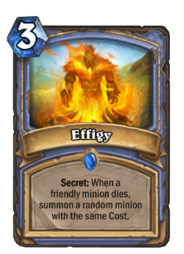 Mage gets its own powerful new card in the form of a Secret. Mage is already the class with the best (and highest-cost) secrets, and Effigy is no exception. With a little careful planning, your big late-game minions will immediately pop out another one. While slightly vulnerable to spells like Hex and Polymorph, forcing your opponent to spend its best removal to deal with a Secret is a big bonus. 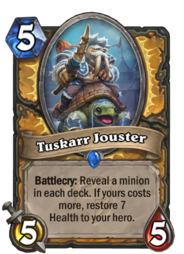 One of Paladin's Joust cards is also one of the best in the game for anti-aggro. At solid stats, you get the chance of 7 health worth of healing, meaning this could easily replace Antique Healbot in many Paladin decks. Aggressive decks tend to rush you down and come within only a turn or two of dying themselves, and this beefy body attached to healing is more than enough to make that swing the other way. 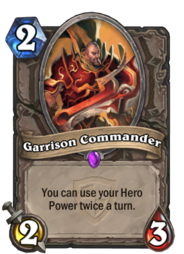 Garrison Commander isn't an exciting card on his own, since as an early game play his effect is essentially useless. Saving him in your hand for later, however, he makes for some incredibly powerful synergies. Pair him with Maiden of the Lake or Fencing Coach for double the Inspire effects at the normal cost. If you save him in your hand for a turn when you can benefit from multiple uses of Inspire, he'll enable big board swings in your favor. 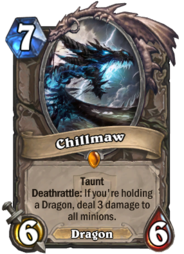 Easily the most exciting new Dragon and a Legendary minion to boot, Chillmaw is yet another anti-aggro solution. He's slightly higher cost than his stats would imply, but his Deathrattle effect has the potential to destroy a full board of Grim Patrons or other small minions. Even better, the trigger for his effect makes him a unique kind of bluff. Will he trigger or won't he? Your opponent has to kill it to find out, so even if you're not holding a dragon they'll probably err on the side of caution and make sub-optimal plays, just in case. 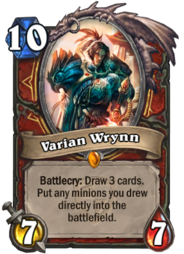 Variann Wrynn is creating a lot of buzz among Hearthstone fans, and for good reason. A 7/7 for 10 Mana would be terrible, if not for his immediate effect. Warriors are bound to fill their deck with high-cost minions like Ragnaros, Grommash Hellscream, or even Kel'Thuzad, just for the chance that you can play any or all of them for free. Plus, at 10 mana, you should have a reasonably good idea of which minions are remaining in your deck by the time you're able to play him.

On the other end of the crafting spectrum comes dusting. While you can automatically gain dust by disenchanting duplicate cards, crafty Hearthstone players can pick and choose which cards they don't want to gain the extra dust needed for that last card in a set. If you cracked open any of these from your random packs, you can safely turn them to dust.

The values for dusting are much lower, though: 10 for Common, 20 for Rare, 100 for Epic, and 400 for Legendary. For that reason, we're avoiding recommending Common cards, since the reward is so small. 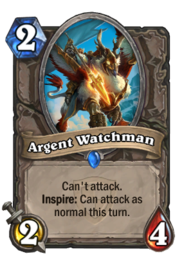 While its stats are advantageous for the cost, they would need to be significantly higher to make this card worthwhile. At a mere 2/4 in stats, it trades evenly with two other two-drops at best, and even then only if you give it Taunt or use your Hero Power. In the late game, when you have more mana to spend on your Hero Power, it just dies easily to any big minions. 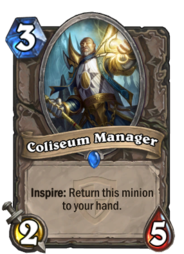 Like the Argent Watchman, this minion has really great stats for the cost. However, its drawback is far too steep. There may be a strategy that emerges from yo-yoing this minion back into your hand, but you'd just have to replay him for the same cost. For the time being, at least, he seems very safe to dust. 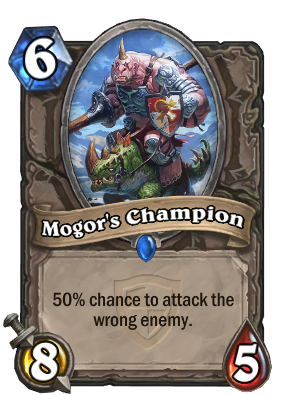 Mogor's Champion continues the Hearthstone tradition of big dumb trolls, but in this case it makes him a little too hobbled. His 50% accuracy drawback is steep enough, but Blizzard double-dipped by also giving him only five health on a six-drop. By that point in the game, he's vulnerable to just about anything. 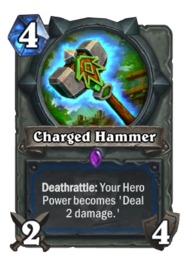 This card is very interesting, but not very useful. While "Deal 2 Damage" is a powerful effect in Shadowform Priest and the newly boosted Mages, the card comes at too high a cost. You could play it at turn 3 at the very earliest, and then you have to wait 4 more turns to get the full attack value before its Deathrattle takes effect. You could always break it with another weapon, but at that point you're sacrificing some of your 4-mana weapon for a huge loss of tempo. Worse yet, you can't use your Totems after this takes effect, so new Totem synergy cards would be dead in your deck. 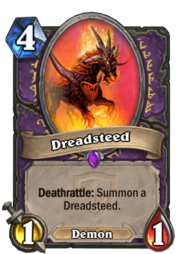 Another really cool card design that probably doesn't have much practical play in its future, Dreadsteed offers the chance at infinite value. It almost seems like Imp-losion, the popular Warlock card that can offer up to 4 1/1s for 4 mana. Still, their power comes from overwhelming the board, and putting a single 1/1 down for 4 mana just isn't very appealing. There are some dream plays with this and cards like Kel'Thuzad, but they're not going to be consistent enough to be practical. 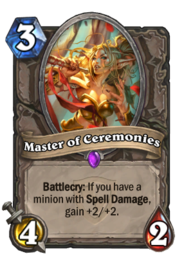 Like Big Game Hunter, this is a 3-mana 4/2. Unlike BGH, it's an extremely situational effect that doesn't play well with other cards. Spell Damage is a nice bonus, but the minions that offer it are so weak that it's difficult to rely on having one on the board. To make this card work, you'd need to build a deck specifically around Spell Damage minions. It's never a good idea to include sub-optimal cards just to make a single card in your deck work. 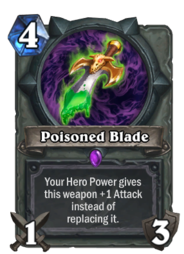 What an awful card. The philosophy behind Poisoned Blade is pretty clear: the Inspire effects are less useful for Rogue, because she'd have to break her weapon constantly to use it every turn. Poisoned Blade would make Inspire viable, if the cost weren't so outrageous. As it is, you can't even start capitalizing on Inspire until turn 4, and even then you're playing a 1/3 weapon. Compare this to the Shaman's Stormforged Axe, which is a 2/3 for 3 mana, and you'd be paying 6 mana just to match it. 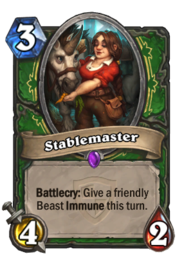 Stablemaster is adorable, but not very useful. A temporary Immune effect already exists with the 1-mana Bestial Wrath, and grants an attack bonus to boot. This one just puts a vulnerable 4/2 body on the board. The idea behind 4/2s like Big Game Hunter is that it has a big, immediate effect that can't be replicated easily in other cards. An effect like Stablemaster's can be done better, for cheaper. 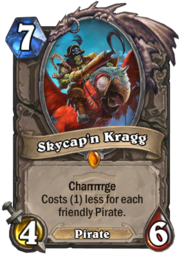 Tempted as you may be to keep Kragg around for his unique flavor, he's an easy 400 Dust if you're in a pinch. He's clearly meant to synergize with Pirate decks, but there's a reason no one plays Pirate decks: they're bad. A Legendary that only becomes good if you have a bunch of Pirates on the board doesn't make it any better, and building around the one-in-a-million scenario where he'd be useful is going to make your deck worse. 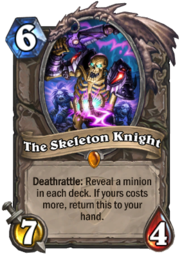 Skeleton Knight is like Dreadsteed in that it potentially offers infinite value. It's unlike Dreadsteed in that it's both situational and requires you to play it at full cost over and over. No thanks! He's got a vulnerable body and he's meant to come back over and over, but that just presents a problem for the player. Even if you win every single Joust, start to finish, you still have to use 6-mana every time you play him. Realistically, you'll get two or three uses out of him, and pay a total of 18 mana for a four-health minion who keeps dying before you can ever attack with him.