Blizzard held a live stream earlier today and among the topics was Hearthstone's upcoming Grand Tournament expansion. There were some whole new cards revealed and Shacknews is wasting no time breaking them down as we continue our ongoing look at the newest cards set to hit the game. 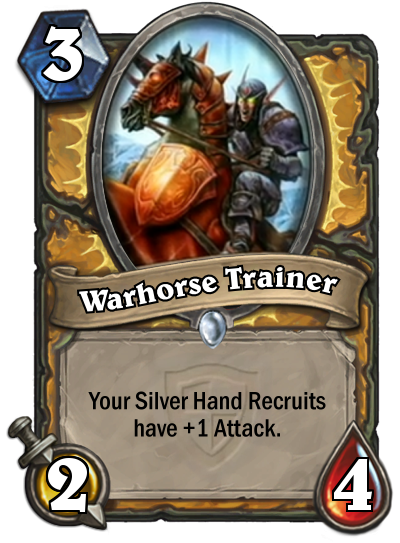 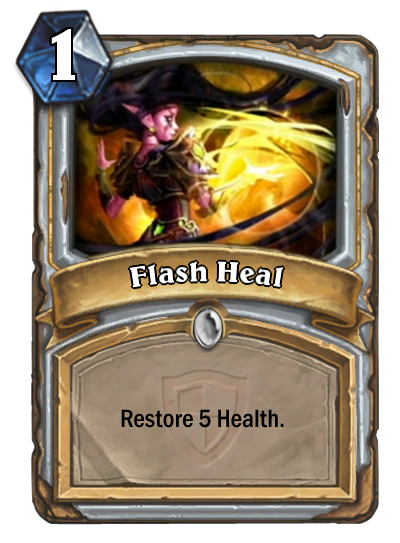 Here's a straight-up heal spell for the Priest, which comes at a cheap 1 mana. This is a versatile healing spell for such a low cost, but it can be a huge life-saver in the late stages in the game.

As Priest players may have immediately guessed, this heal will work wonders with Prophet Velen and can often get players right back in the game. For a bonus, try playing this alongside Velen and Light of the Naaru to heal a whopping 16 Health for only 9 mana.

But what about Priests looking to cause some serious damage? Well, that's where Auchenai Soulpriest comes in. Playing that minion first turns Flash Heal into a 1-mana, 5 damage spell. That's incredibly handy for situations that don't quite require Circle of Healing, making Auchenai Soulpriest an even more useful minion than ever before.

For a no-frills heal spell, this could become a Priest staple. 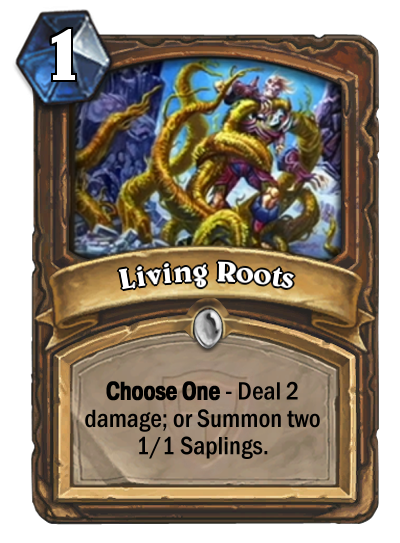 The Druid has been one of the big winners of the Grand Tournament so far, but this card can't really be considered one of its winners. Its main advantage is cheap removal, though there aren't too many situations where 2 damage can make a difference in removing opposing minions. Though it's more expensive, Wrath is a more versatile play and works as an overall better choice.

The other option is to summon two 1/1 Saplings, which is something like a mini-Muster for Battle, only without the weapon. It's not bad for a first-turn play, since it's unlikely that the opponent can remove both saplings on the next turn. That leaves Turn 2 open for a Mark of the Wild buff. Of course, that spell may be better served with other minions, which means Living Roots could probably go by the wayside in favor of some better 1-mana options. 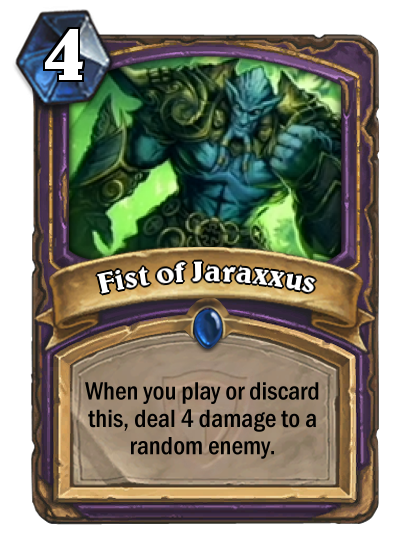 (4) Fist of Jaraxxus - When you play or discard this, deal 4 damage to a random enemy

Here we have something that might make some people rethink the way they play Warlock. Discard has always been an undesirable effect, often saved for a last resort or as a finishing play. However, the Fist of Jaraxxus spell actually encourages it.

While it can be used as a standard spell to strike at a random enemy, the effect will also kick in when the card is discarded. This gives cards like Soulfire and Doomguard some extra punch. For Warlock players that play these cards anyway, this is a huge boost.

For everyone else, however, there's still an undesirable random element to worry about. The "random enemy" keywords make this something of an unreliable play, especially if the aim is for board control. Think really hard before putting your fate in the hands of chance. 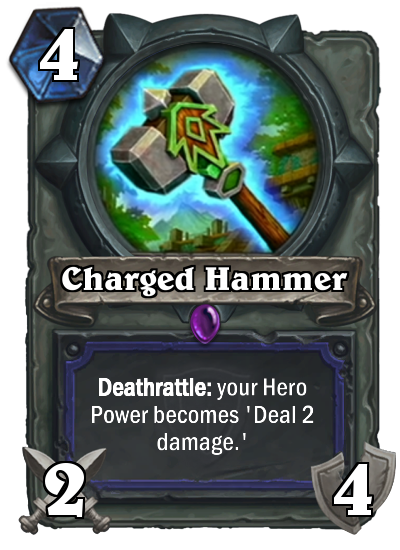 The Shaman has become one of the more difficult classes to play against, just because he has some truly unpredictable strategies. This new weapon is essentially his version of Shadowform, which Priest players know can be a big-time boost in the right situation. And unlike Shadowform, the Charged Hammer effect won't kick in until its 4 durability is used up, making it a potentially beneficial late game play. (Or early game play, if the opponent is foolish enough to use Acidic Swamp Ooze and kick the effect in early.)

The question becomes, is it worth sacrificing the Hero Power totems? The totems offer great versatility in a pinch, whether it's from healing minions, offering extra Spell Power, or flanking them with a Taunt decoy. On top of that, several of the Shaman cards revealed for the Grand Tournament seem to emphasize totem synergy. For those that depend on totems, this weapon may not be worth it.

However, for those that do not overly depend on totems, instead running their decks on cards like Ancestral Spirit and Reincarnate, Charged Hammer could be a good weapon to keep around. Not only does it have a high durability, but it doesn't have the Overload drawback that Stormforged Axe and Doomhammer have. This is definitely a weapon to consider. 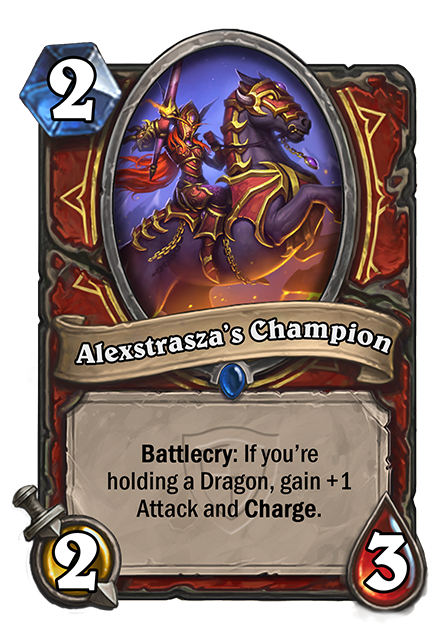 This is a solid Turn 2 play for the Warrior, regardless of whether this Battlecry effect kicks in or not. Minions with 2/3 stats at such a low cost are always welcome, so at worst, Alexstrasza's Champion is Mechwarper without the effect.

For Warriors that pack in dragons (like... oh, say... Alexstrasza), this minion becomes almost as strong a play as Kor'kron Elite, but at half the cost. It's pretty much a no-lose proposition here, although there's also no harm in leaving this minion to the side in favor of Fiery War Axe.

There's still plenty more to go with the reveals for Hearthstone's Grand Tournament expansion. Shacknews plays catch-up with the new cards that were revealed prior to Gamescom starting on Monday, so we'll see you next week!