Blizzard has continued its torrid pace of reveals for the 132 cards that will take up Hearthstone's upcoming Grand Tournament expansion. Shacknews' detailed look into these cards began just a few weeks ago and was set to continue today as a normal installment, but Blizzard threw everyone a curveball this morning at Gamescom 2015.

On top of adding the new "Inspire" mechanic, Hearthstone will now introduce Jousting minions. This throws everything for a loop, as it depends more on the RNG element than ever before. Synergy is almost unpredictable, at least until some hands-on time has passed. Nonetheless, Shacknews will continue its breakdown unabated and for this particular installment of Inspired, we will focus exclusively on these "Joust" cards. 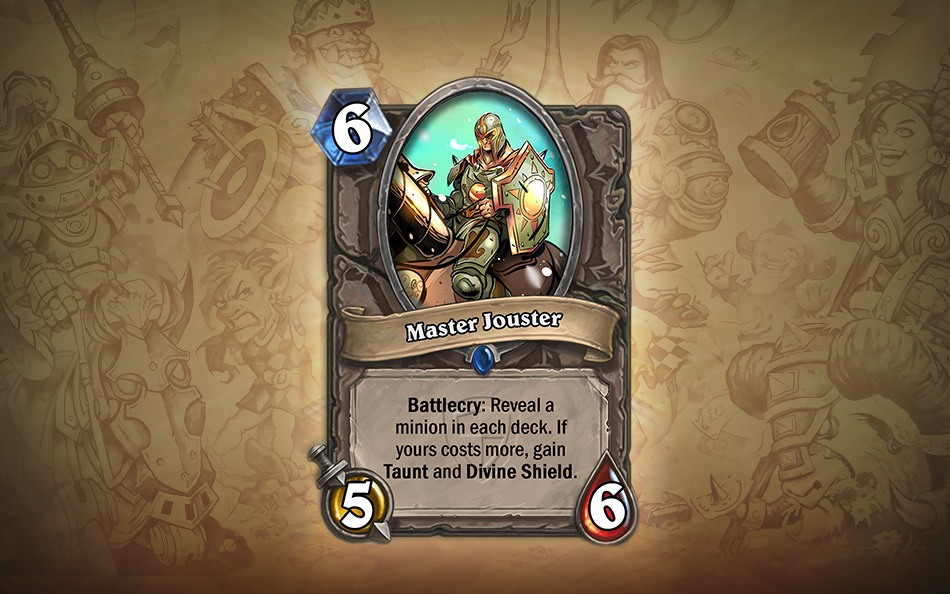 (6) Master Jouster (5/6) - Battlecry: Reveal a minion in each deck. If yours costs more, gain Taunt and Divine Shield

Here's the first case of what I suspect will be many where the new Grand Tournament cards will try and tempt players with the lure of random chance when there are already perfectly acceptable substitutes out in the wild. Let's look at Master Jouster. For a 6-cost minion, 5/6 stats are mildly decent, though more and more 4-cost minions are starting to feature 6 health. It's the effect that's mainly enticing, one that only kicks in after a luck of the draw.

But why take that chance when there's already a perfectly serviceable minion in the form of Sunwalker? In many ways, Sunwalker is even better, since his 4-attack falls in that nebulous realm that keeps him immune from most Priest spells. The extra attack value isn't worth the roll of the dice, so maybe consider sending Master Jouster back to his tent. 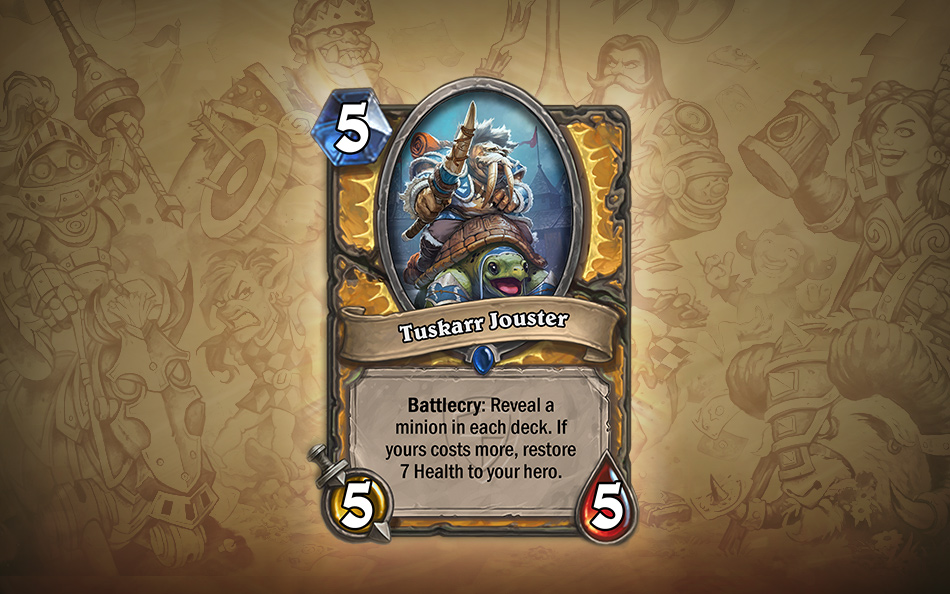 (5) Tuskarr Jouster - Battlecry: Reveal a minion in each deck. If yours costs more, restore 7 Health to your hero.

Now this Paladin-exclusive minion demonstrates a far better use of the Jousting mechanic. At a cost of 5 mana, Tuskarr Jouster has some good stats on par with Dragon Consort. On his own, he stands out just fine. So if he wins his joust and his ability kicks in, it's essentially gravy.

Now whether to pick this guy or the aforementioned Dragon Consort is purely a matter of preference. Dragon Paladins will obviously want to lean towards the latter, since he can greatly reduce the cost of Nefarian. But Tuskarr Jouster is certainly nothing to sneeze at and could also serve as a palatable substitute for health-recovery minions like Antique Healbot. 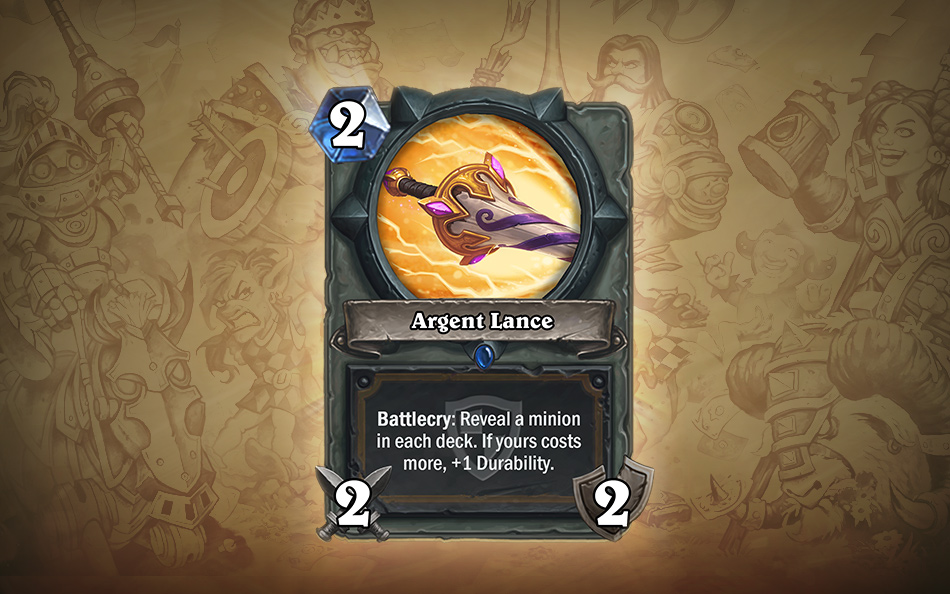 Here's an example of the Jousting mechanic applied to a weapon. On the surface, a single Durability would be inconsequential to most Paladins, especially for such a low cost weapon. However, the question now becomes, how does the Argent Lance compare to other Paladin weapons already available?

The answer is not well, especially when one examines the Paladin's latest weapon to come from the Goblins vs. Gnomes expansion. For just one more mana, Coghammer outdoes Argent Lance in every fashion without the need for a random card draw. The Coghammer already has 2/3 stats, but also offers the bonus of giving a minion Taunt and Divine Shield, creating countless synergy possibilities. Argent Lance provides no such opportunities and because of that, it's best left back in the armory. 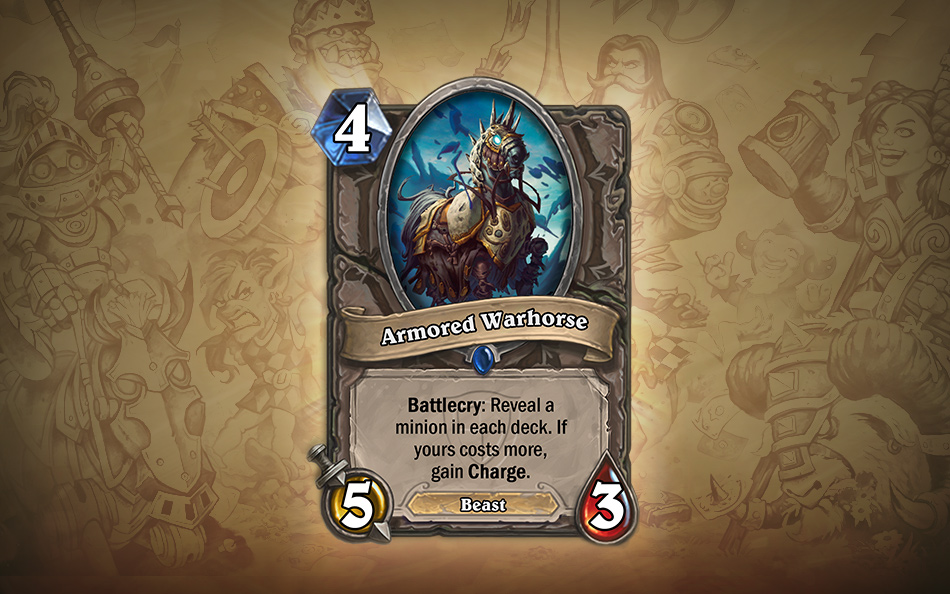 (4) Armored Warhorse (5/3) - Battlecry: Reveal a minion in each deck. If yours costs more, gain Charge

Want to talk about a roll of the dice? Minions don't get much chancier than this one, as Armored Warhorse's effectiveness is tied almost exclusively to his ability.

Packing Armored Warhorse into your deck means it's likely being used for minion removal, just because 5/3 stats are weak sauce, especially for such a high cost. It would also mean banking on winning the draw, since losing pretty much makes it a sitting duck for low-cost removal spells. Maybe Handlock decks can get a use out of this guy, since they'll likely be packing giants anyway, but most other classes would be better served in not taking such a great risk. Warrior, in particular, already has a palatable 4-cost minion that already has Charge: Kor'Kron Elite. 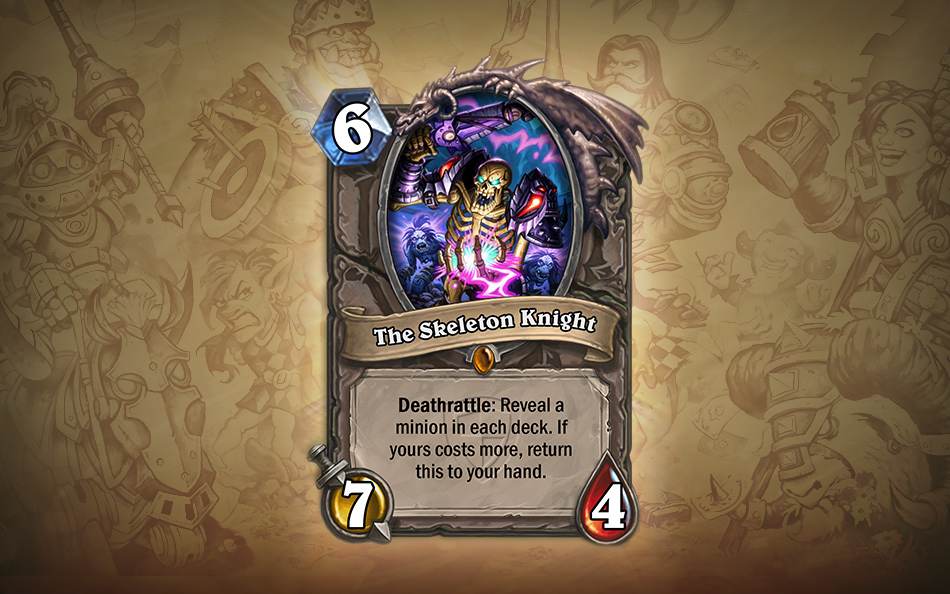 (6) The Skeleton Knight (7/4) - Deathrattle: Reveal a minion in each deck, If yours costs more, return this to your hand

Here's the first of the legendary jousters and it's one that throws something of a kink into the idea by using the mechanic as a Deathrattle instead of a Battlecry. That alone makes it an intriguing proposition.

The problem with The Skeleton Knight is that its 7/4 stats more than often won't cut the mustard. Removing anything with 4 health is just too easy in today's Hearthstone and if the player loses the draw, then he becomes nothing more than a glorified Salty Dog.

So packing this legendary is only recommended for those that are certain of winning any kind of draw. That means you, Ramp Druids and Handlock players. High-cost Druid minions and giants are often assured victory in any kind of draw situation and that makes The Skeleton Knight into a recurring nightmare, since opponents will have to continually waste removal spells to send him back to the grave. The Skelton Knight's uses are limited, but he does have some potential, as does the Jousting mechanic as a whole.

There's still more to go with the reveals for Hearthstone's Grand Tournament expansion. Shacknews will continue its ongoing analysis of these new cards as they're released and will break down even more cards revealed at Gamescom 2015 and beyond. Stay tuned for more tomorrow!