Summer Games Done Quick 2015 is moving into its fourth day, as Thursday features more speed runs across some of the best (and most interesting) video games. The people at Games Done Quick continue to raise money for Doctors Without Borders today and for the rest of the week, nearly shattering the $500,000 mark. Shacknews is looking back at the best highlights across the week and here are the best runs from Wednesday.

The Legend of Zelda - swordless (NES)

Speed runs don't get much better than this, as jkoper attempts to run through the NES classic Legend of Zelda with a major twist. Link must complete his adventure without the use of his sword. As one might imagine, the toughest part of this run comes at the beginning, in which Link must simply find a means of defense. Once he does, watch as jkoper tries to make it as far into the game as possible.

The Earthbound speed run was a fascinating one to watch, as it's hard to fathom how to sprint through an RPG. Speed runner Aurilliux did so by demonstrating some truly proficient mastery of the game's glitches. As Chattycast co-host Bryan "Doctor Games" Carr eloquently put it during yesterday's show, it was like Neo from The Matrix seeing the code before his eyes. Watch in amazement as Aurilliux is able to time his use of Skip Sandwiches, measure his HP counter, and analyze his surroundings to take giant shortcuts across the entire game before reaching Giygas.

But more than that, watch this run as a tribute to the late Satoru Iwata, one of Earthbound's lead designers. And when you see this screen... 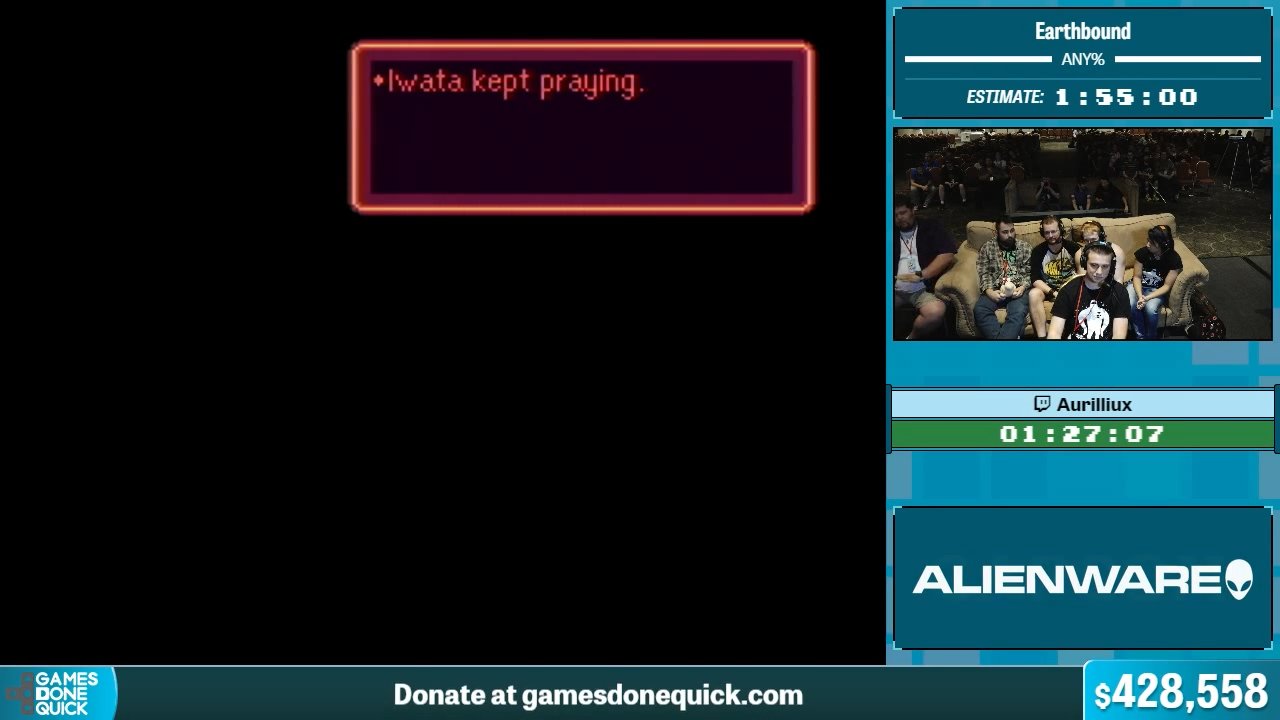 ...try to contain the tears.

It's time for another block of Castlevania, this time veering more towards the old-school classics. The block will begin with Castlevania: Simon's Quest and continue afterwards with Simon Belmont's Super NES debut, Super Castlevania IV. The runs will conclude with Castlevania: Rondo of Blood, played on the Wii Virtual Console. None of the runs are estimated to go over 40 minutes, so carve out a couple of hours and check out some retro vampire-slaying action.

The futuristic X had his block a couple of days ago, but now it's time for the original Blue Bomber to get his own time to shine. Mega Man will jump into action starting with the imported Rockman 3: Burst Chaser, followed by original classics Mega Man: The Wily Wars and Mega Man 4. That's followed up by more modern takes on the formula, Mega Man 10 (expected to be a Hard mode run) and Mega Man & Bass. Platformers don't get much more difficult than Mega Man, so this should be a treat to watch.

Platformers are fine, but what about the granddaddy of all shooters? There's plenty of love for Doom and for this year's Summer Games Done Quick, it'll come in the form of one of the series' few console releases, Doom 64. Speed runner Grav will attempt to get through the game in less than 40 minutes, which should be a treat for old-school PC gamers to check out.