EVO 2015: Hitting the dance floor with Persona 4: Dancing All Night

The young Persona Investigation Team has been in a number of outrageous tussles, from the classic RPG Persona 4 Golden to the solid fighting game Persona 4 Arena. But now their latest investigation into the continuing weirdness surrounding their lives takes them to the dance floor. In-between catching some outrageous fighting game tournaments and going hands-on with the indie games on-hand at EVO 2015, Shacknews strapped on a pair of dancing shoes and hit the stage with publisher Atlus to check out Persona 4: Dancing All Night.

Those accustomed to music games along the lines of Dance Dance Revolution or the Final Fantasy Theatrhythm series of games will be familiar with the mechanics of Persona 4: Dancing All Night. Players select a J-Pop tune and utilize six buttons to play along with each track. The game will mostly use the Up, Left, and Down buttons on the D-pad, as well as the Triangle, Circle, and X buttons. The button cues will fly across the screen and the player must press the corresponding button in time with the beat. 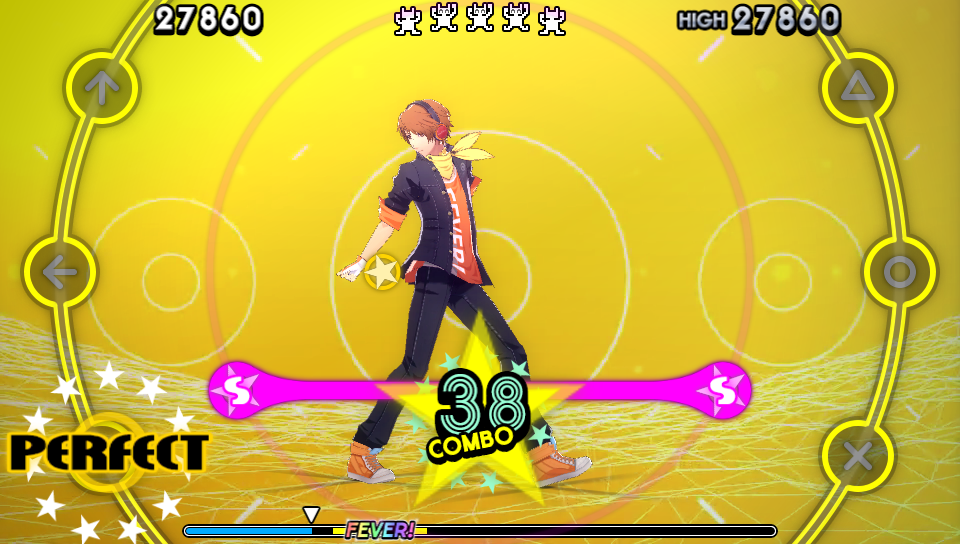 There are a few extra notes to get to know, including some pink note pairs that require pressing two buttons (Up and Triangle, Left and Circle, or Down and X) simultaneously. A different set of green hollow extended notes require players to hold down the button for a couple of seconds. Playing through Normal was an easy enough affair, as the toughest part is really only keeping muscle memory intact while the notes get faster.

The harder difficulty is far more intense and not just because the notes fly a lot faster. The margin for error is a lot slimmer, so the song will fail after just a couple of consecutive misses. On top of that, maintaining a multiplier is exceedingly tricky. A blue circle will reverberate across the screen and when it crosses the button line, players must flick the right analog stick to successfully keep up their multiplier. The blue line is extremely subtle and easy to miss, especially as the song gets more frantic. This difficulty level will not be for the weak of heart.

In an interesting turn of events, by the time this writer reached the Atlus booth on Saturday, one of the booth's Vita dev kits had been stolen. That meant the demo was running on a different setup: a PlayStation TV. Yes, Persona 4: Dancing All Night will support the PlayStation TV and playing with a DualShock 3 felt just fine. If anything, it felt like this would be the more ideal way to enjoy the game, as the music is catchy enough for the big screen, while the control setup is laid out in such a way that a larger controller would feel smoother than the Vita setup.

Over 25 songs will be included with Persona 4: Dancing All Night, which will keep J-Pop enthusiasts happy. Persona fans will also be treated to a Story Mode that will unfold similarly to the one from the Persona 4 Arena line of games. The Investigation Team's tale is set to continue exclusively on PlayStation Vita this fall.