Microsoft has announced a special limited-time promotion that offers a free Xbox One game with the purchase of a new Xbox One console.

The promotion will begin on Sunday, June 21 and will run through June 27 and is only valid at participating retailers. Those who purchase an Xbox One console, whether it be a 500GB or the new 1TB model, will be able to choose any Xbox One game for free as long as it’s a new, disc-based game for the console with a maximum retail value of $59.99. Yes -- this means you absolutely can pick up a copy of The Witcher 3: Wild Hunt for free if you purchase an Xbox One starting on Father’s Day.

The only limitation we found that we should mention is you can’t pre-order a game to get it for free when it releases. This promotion is only good for games that are already available. And as we suggested, we totally think you should pick up The Witcher 3 as your free game considering how much you’ll get out of the game. Also - don't forget Batman: Arkham Knight comes out this week, so that could be another possibility.

Now that the Xbox One will be backwards compatible, this could be a great promotion for those with an Xbox 360 to jump into now that your extensive library won't go to waste if you upgrade. 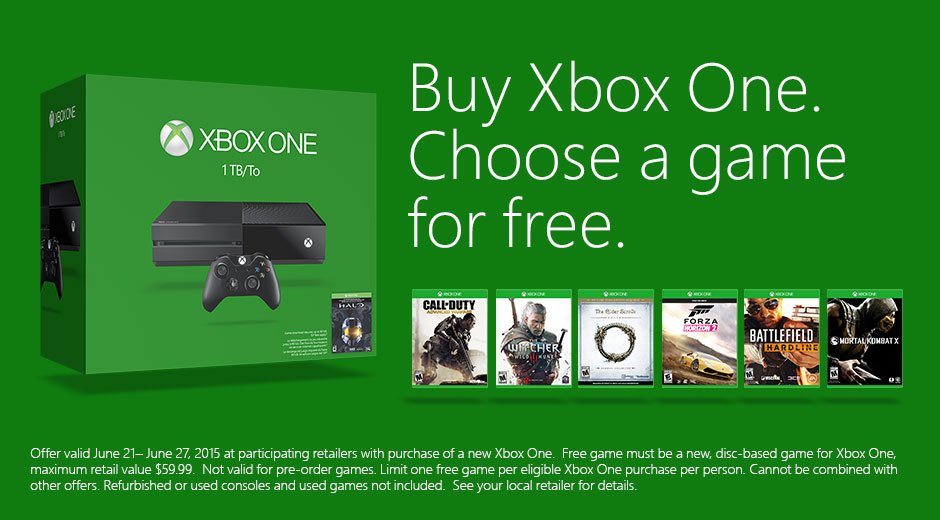