The world is your playground. There's a vast open space to scavenge, forage, and collect pieces to build an impenetrable fort. Well, it had better be impenetrable, anyway.

This is the idea behind Fortnite, the latest multiplayer effort from Epic Games. There's a wide open space to get together with friends and put up a structure as big as they can imagine. That structure's fortitude will then be put to the test once nightfall kicks in. Shacknews recently had a chance to go hands-on with some of Fortnite's classes, put up some makeshift shacks, and defend them as best as humanly possible against a threat known as the Storm. 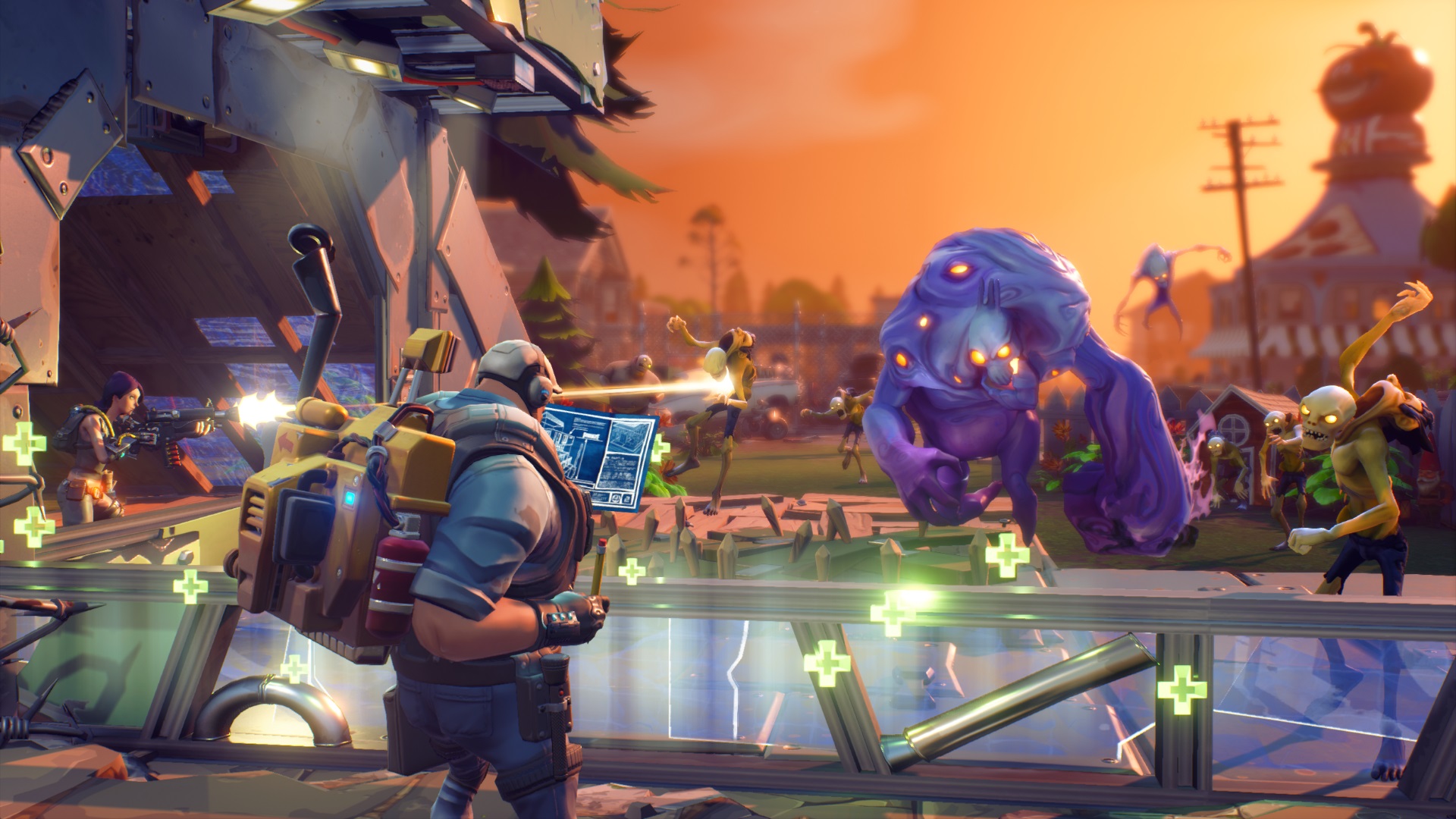 Fortnite's tutorial is a friendly one, walking me through the ins-and-outs of the game's menus and how to go about building structures. Essentially, most of the game's world is destructible, including existing buildings, bushes, trees, and vehicles. Anything that's torn apart will yield a variety of building materials, like wood and metal, to build walls and floors. Players can even dig underneath them to find basement structures filled with hidden loot. It's a basic base-building game, but one that's capably put together with simple controls. I was quickly on my way towards building my first set of walls, though I eventually bumped into a novice problem of boxing myself in. Fortunately, a simple click-and-drag mechanic allowed me to craft a door on an existing wall.

I mainly spent my play time as the Constructor, learning the ropes and taking advantage of his quicker building skills. Once I picked up the ropes, I was placed in a session with three other players for a round of Atlas Defense, using classes like the melee-based Ninja and the heavily-armed Commando. Once we were all in a session, the task was the same for all of us: build as big a structure as possible to protect our Atlas core from the monsters of the Storm. We essentially had as much time as we wanted, though there are greater loot bonuses for fending off the core within a couple of days.

Our team wasn't entirely creative. We simply put up as many walls as possible to stave off the enemy rush, placing traps like spiky floors and springs to buy as much time as possible. Part of the reason for that is that while the trailers will show off intricately built bases and the like, that isn't entirely possible in the early stages of the game. Resources are limited and you'll eventually run out of trees to cut down. However, Epic has indicated that large-scale buildings are part of their vision for Fortnite's future, hinting at more time-intensive game modes that will eventually see players build massive structures against larger-than-average waves of enemies. 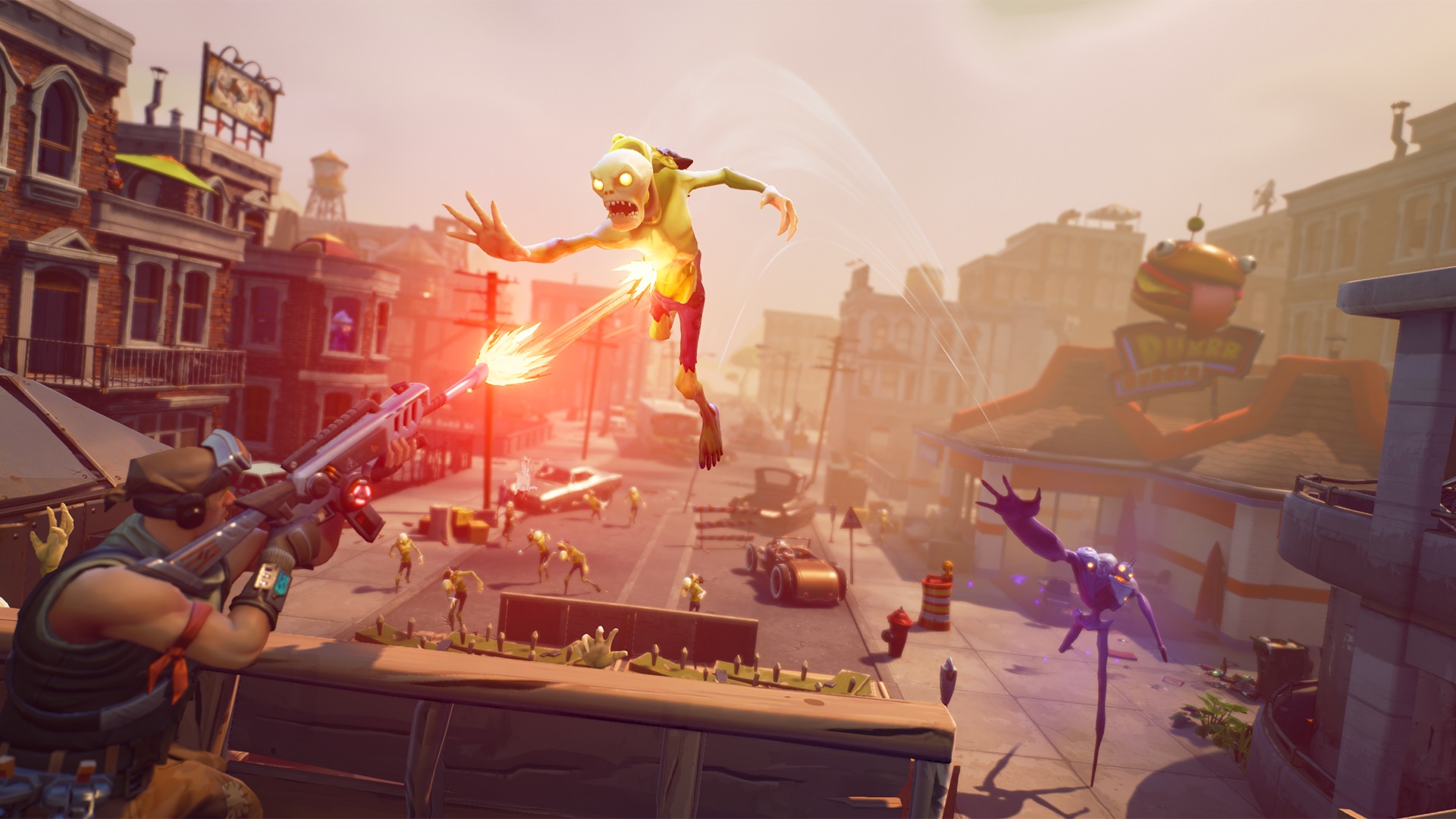 Once our structure was ready, we cued up the PvE portion of the game. Monsters from the Storm would start flooding out from various locations on the map, mostly trudging mindlessly towards our core. The Husks are a relentless sort, so they'll almost single-mindedly try and slash away at structures. They were simple enough to pick off with basic melee weapons, like a sword and even the basic Constructor axe. It should be noted that a backup weapon is always necessary, because all weapons will wear down from overuse. If it wears down completely, it's no longer usable. Likewise, ammo is not always plentiful, so firearms should be used sparingly.

Holding off the first waves was simple enough, especially during the downtimes when we had opportunities to rebuild. Even as the waves were active, we all made sure to have extra resources available to repair damage whenever possible. Then things picked up when my team was tasked with protecting two cores.

Multitasking is where the difficulty really kicks in, as splitting up to keep an eye on two cores can be daunting. Defense got even harder, because this time, we weren't just being bombarded by mindless zombies. Different enemy types were introduced, including baseball-themed enemies that lobbed projectiles and larger foes carrying propane tanks in an effort to kamikaze buildings or players. On top of that, the AI got noticeably smarter. A different monster type, known as the Flinger, would sometimes grab its partners and toss them into the air over our walls, advancing them significantly towards the core. The numbers quickly overwhelmed us and the core was lost.

Fortnite is coming along smoothly, with the Unreal Engine 4 engine showing off some of its chops with its destructible environments, smooth landscapes, and seamless day/night cycles. There's potential in the building phases, but admittedly, it feels like there's far more to explore than what I saw in the less-than-two-hours that I spent with the game. Epic is also aiming to add more to the game in the future, including a PvP game mode. Right now, Fortnite looks to be surprisingly deep for what's supposed to be a free-to-play experience, so hopefully Epic can indeed add to it in the coming months.

Fortnite is coming soon to PC. Also, as announced during this morning's WWDC event, the game is in line to come to Mac, built with Apple's updated Metal API. Look for a closed beta to begin later this year.