5 Tips for Success in Massive Chalice

The Chalice has named you as the immortal ruler of a nation, and your sole responsibility is to help defend the kingdom from an encroaching Cadence invasion for 300 years. That's when the Chalice will have built up enough magical energy to eradicate the creatures for good. But that's a long time to wage war. Here are some essential tips to help ensure your kingdom's future.

Go Forth and Multiply 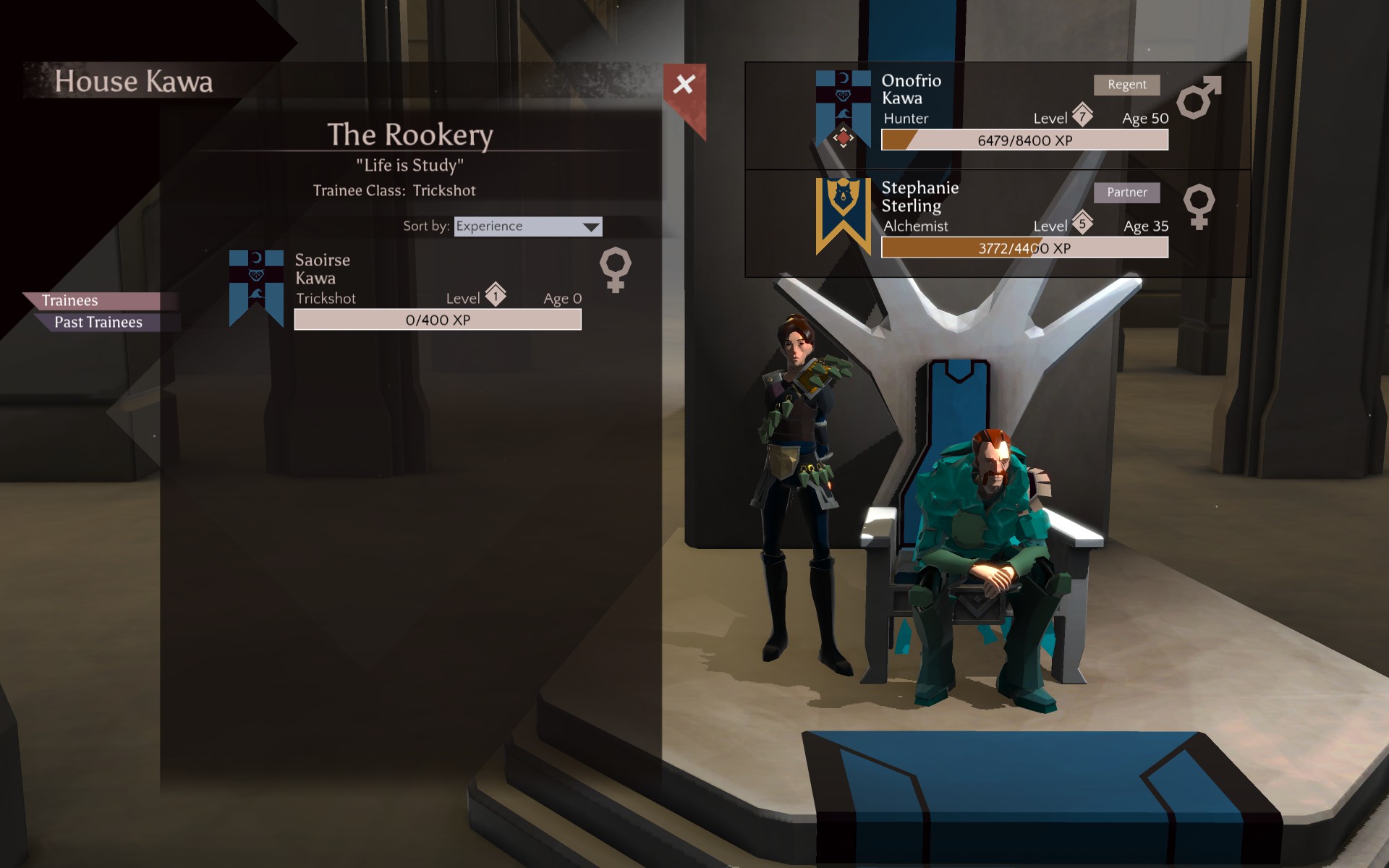 Massive Chalice is very upfront with this. You need an army strong enough to fight a war that will last centuries. That means building Keeps and matching together young fertile couples. It might seem a little offensive to regard your heroes as baby factories, but you're immortal, and they're not. It's your job to ensure that your nation survives the test of time, so that perhaps one day their descendants can marry out of love.

You'll want at least three Keeps for the sake of diversity and class balance. Build as many as you can, but not too quickly, since regents and their spouses can't go into battle. Also account for random events, like family feuds, which prevent future generations from marrying each other.

When it comes to selecting pairs, your priorities should be: 1. Age, 2. Experience, 3. Class, 4. Personality. You'll also want to keep an eye out for bonus properties like high fertility or a disposition toward a specific gender. You can try breed as selectively as you can, but ultimately, you'll have little control over what personality traits you'll end up with. Heroes can start reproducing at age 16, but they'll be too inexperienced to pass many worthwhile traits on. Generally speaking, you'll probably get the most reproductive value from your heroes during their early to mid 20s, after they've gone out on a few missions.

Even with a bunch of thriving Houses, you'll occasionally need to use the chalice to recruit new heroes or adopt orphans to introduce some new blood or replenish missing genders or classes. Keep in mind, it takes 16 years for a child to become battle and breeding ready. During that time, the previous generation will grow old and die. You'll have multiple phases when children will come of age as the elderly die in groups. You'll need to recruit to ensure the generation gap doesn't grow too wide. 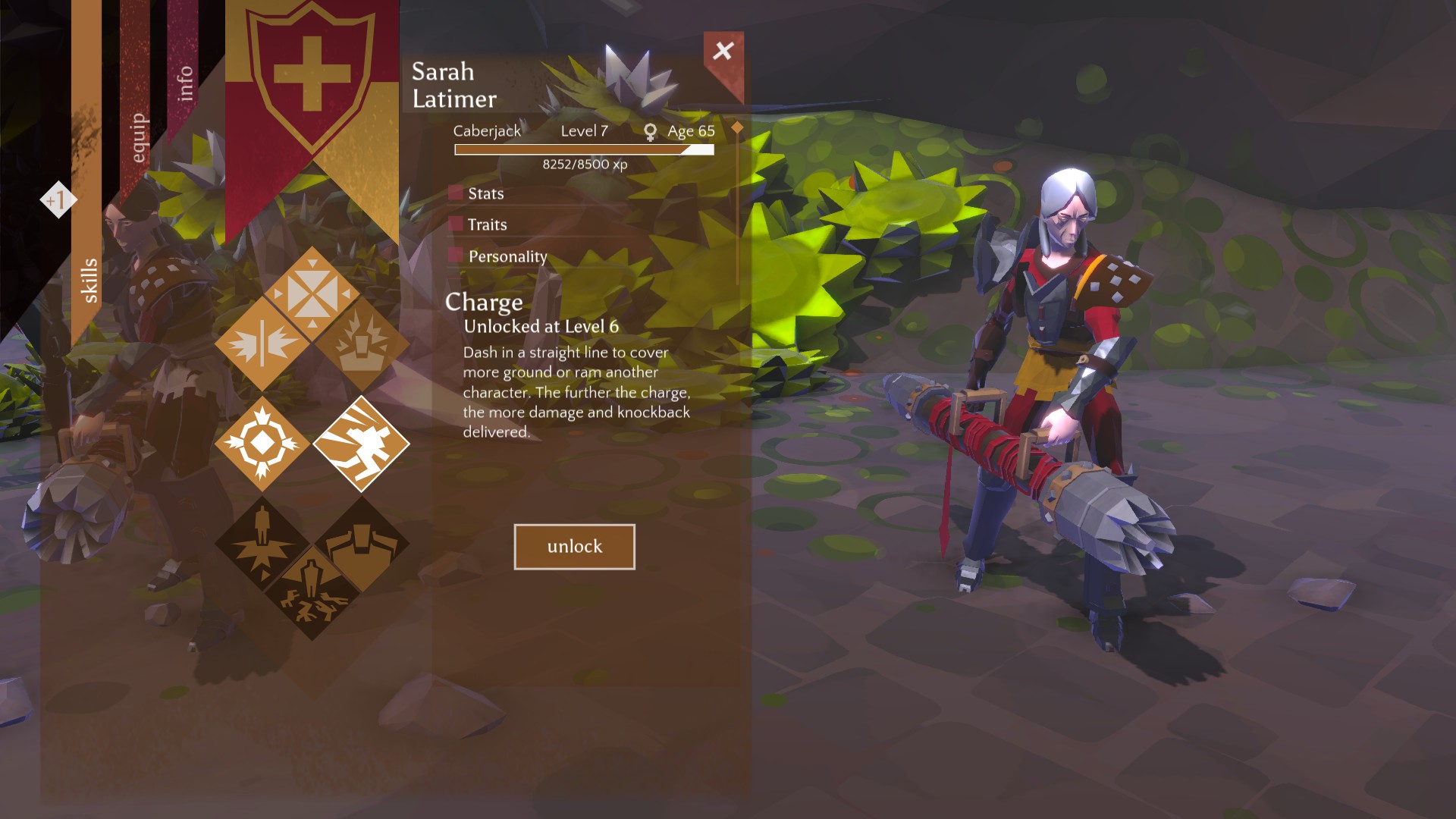 The average age of any given hero is around 60, although some may naturally die much younger, and a rare few might make it past 80. Time will take its toll on your heroes at around 50, but some might start to feel old in their late 40s. That's when their movement points significantly decrease, their eyesight starts to fail them, and they can't hit as hard as they could in their youth. Another possible side effect of age is decreased fertility. But keep an eye out for the Young at Heart personality trait, which negates many of the negative effects of aging.

However, the elderly can still be very productive members of society. Those who can fight, teach. Put your smartest in the Sagewright Guild, where they can increase the speed of research. Take care how many people you assign to the Sagewright, because you could end up with nobody left to defend the kingdom. Meanwhile, assign your most experienced heroes to the Crucible, where they can share their knowledge with all the growing kids of the kingdom. But be careful, because even though the kids will gain more experience in their youth, they could pick up some a few personality traits (good or bad) from their teacher.

Watch Where You Throw Things 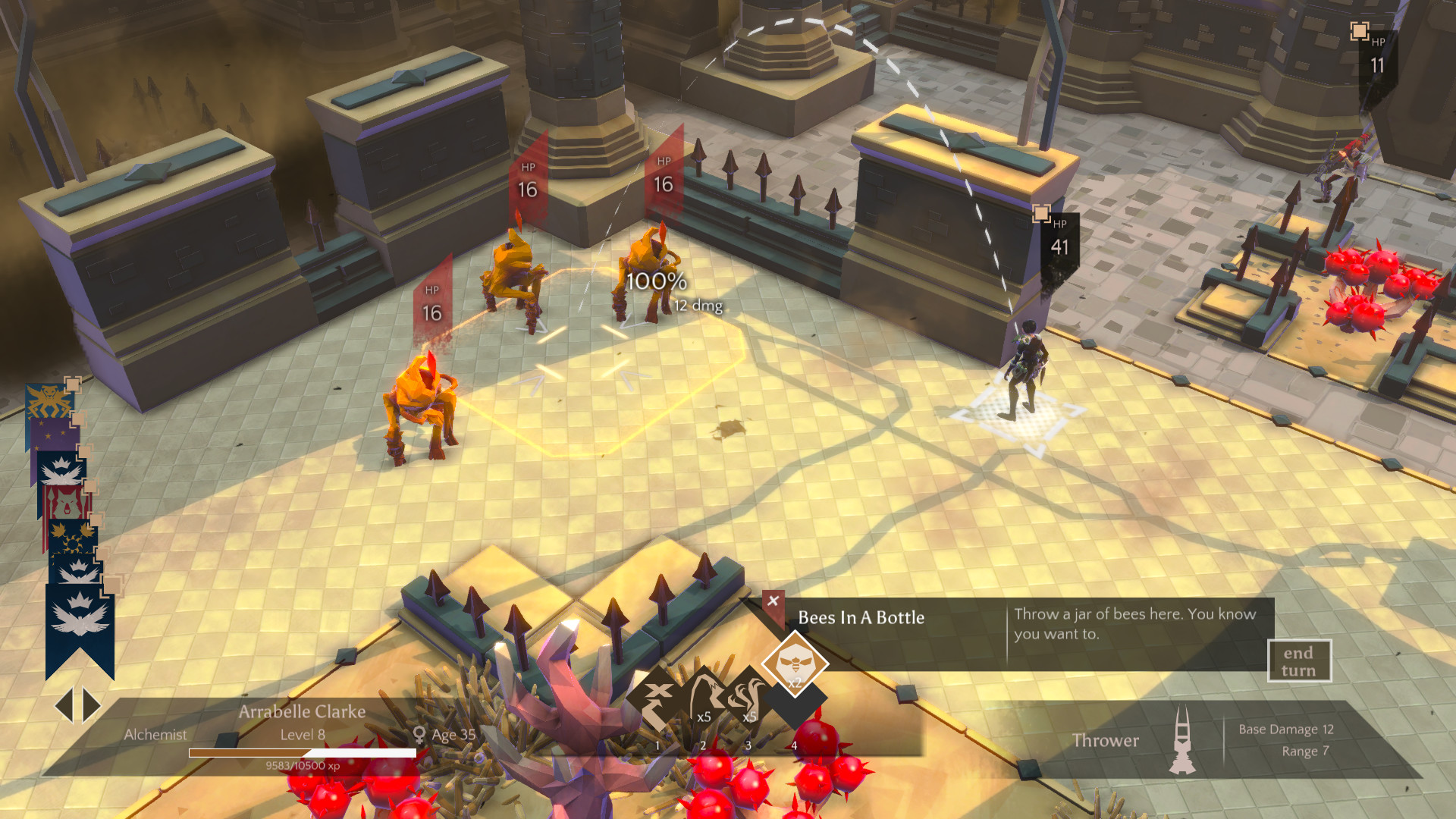 Friendly fire is a always a danger depending on your loadout, especially when you're using explosives. But those Alchemists have a very useful trait: they can lob grenades over walls. So, they can potentially stay behind a wall where it's safe. Then, if you don't have the Honed Hearing skill, stealthily move your hunters in to act as spotters. The Cadence won't know what hit them.

Balancing Between Armor and Arms 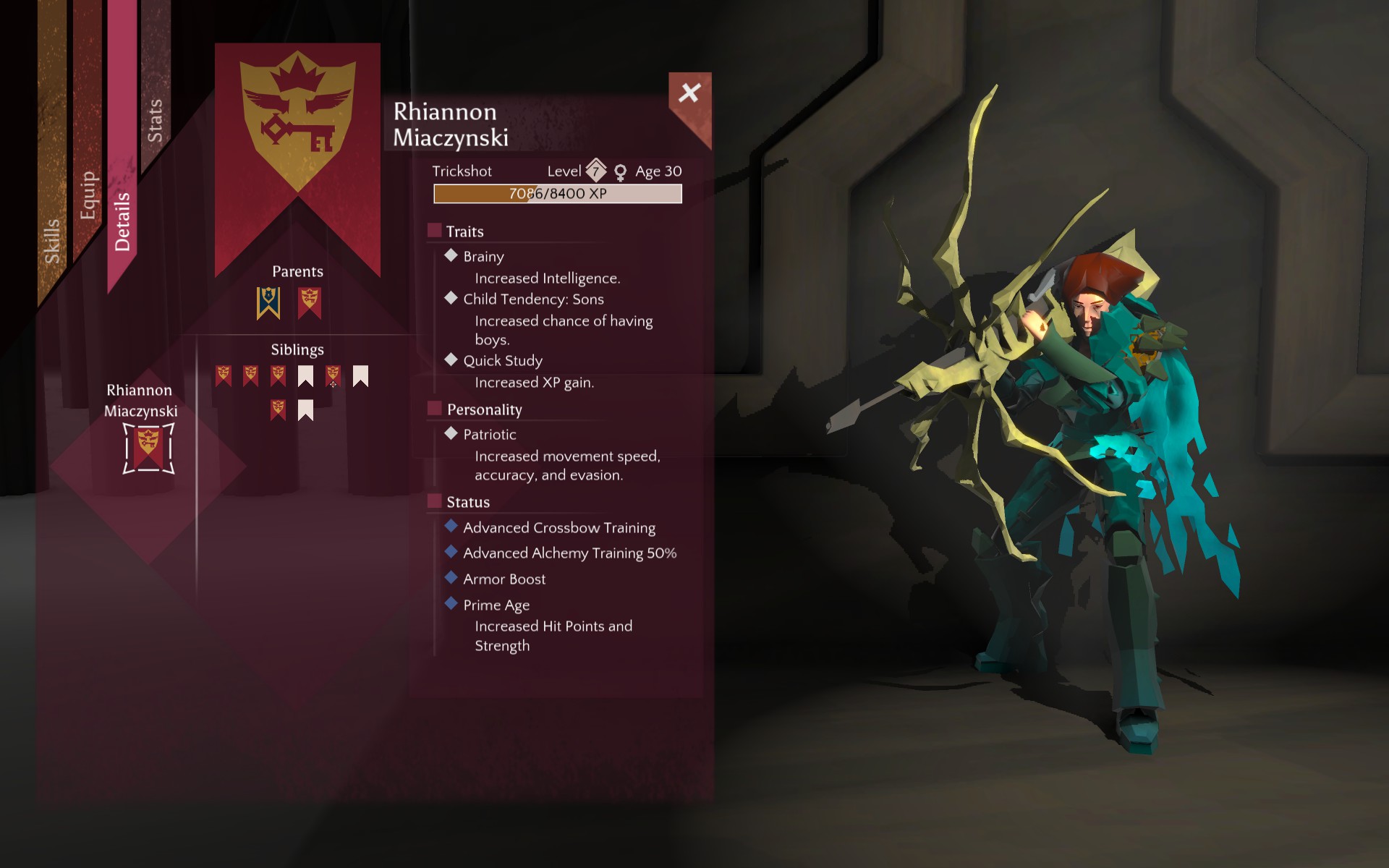 Balancing research is always tricky, but Cadence will never get any easier to fight. You'll soon find yourself in need of proper weapons and armor. Although the first technologies you should pick up are faster recruiting methods, try to focus on armor before moving on to firepower. You'll eventually need to upgrade your weapons, but things to get really intense until the first 150 years, at which time you should at least have medium armor and weapons, along with one or two health items.

The reason you should focus on armor is because many of the battlefields have indirect means of dealing with enemies, including the Cadence themselves. For example, Ruptures will explode when killed, damaging all adjacent creatures. The explosion from a Lapse death has a chance to stun anything that's nearby. If you focus your firepower and time things right, you could set up a nice chain reaction.

There are also a number of special armors, weapons, and items that can be built from remains of dead Cadence creatures. Of these, one of the most important is the Veil Armor, which lets your hunters move in stealth anywhere on the map. You can use it to scout maps and set up ambushes. Everyone has access to a technology once it has been researched, so you won't have to get any additional resources to outfit your Vanguard members with Veil Armor.

Knowledge Through the Ages 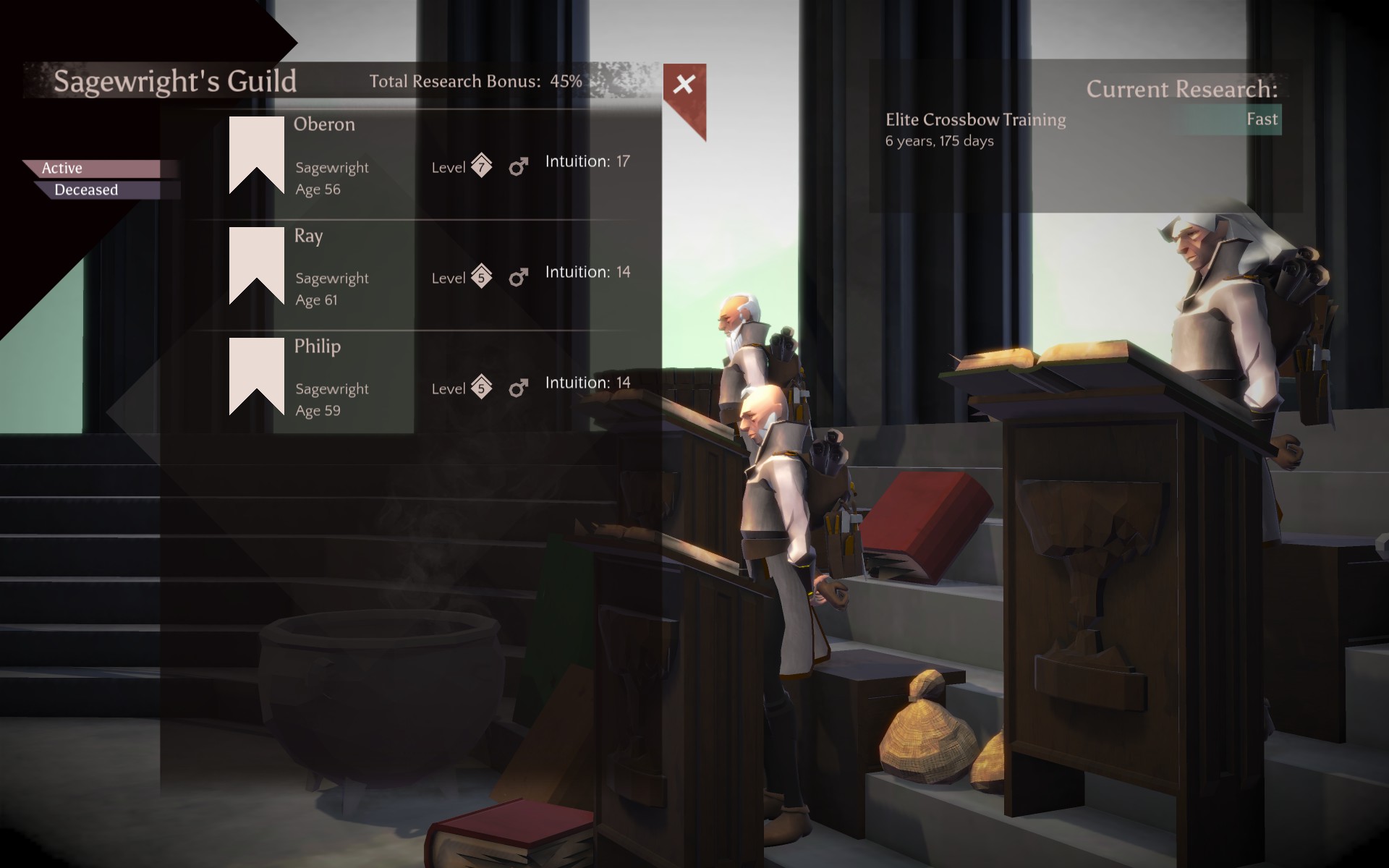 Knowing when to kill something is just as important as killing it. Try to keep in mind who needs the most experience so that they can get in the killing shot. If your hero grows up to be a legend, they'll pass on special Relics to their family members when they retire or die. More importantly, you'll want to groom a few choice heroes to take over as Regents or partners after the current ones die.

Additionally, settle on a flexible tactic and stick with it. If you like sending in a couple Caberjacks to draw attention while your hunters pick off the smaller targets, focus on research to support that strategy. If your kingdom barely has a Caberjack in sight, then there's no point in researching armor or weapons for that class.

Massive Chalice has a nice positive feedback loop when it comes to passing on experience once you get far enough into the game. Between the experience of the parents and whatever is gains you get from the Crucible, kids will have a very decent skill set once they come of age. Some may be proficient enough to become Regents and partners as soon as they turn 16.