There are some things that are just engrained into your brain. Riding a bike, swimming, driving, playing World 1-1 in Super Mario Bros. are just some examples of instincts that are never forgotten. For this writer, I can also add rhythm music games to that list. In particular, Rock Band is something that cannot be forgotten and that's something I learned, once again, when it came time to go hands-on with Rock Band 4.

This installment of Rock Band isn't about to blow anyone away with any particular surfeit of new features. Nor will it dazzle with its visuals, as the crowds and interface feel very much like previous Rock Band games. At this point, Rock Band is what it is. It's about getting with your friends to explore a vast music library and jam together. That atmosphere returns completely intact with Rock Band 4, along with a few other bits of good news. As Harmonix discussed during the game's initial announcement, all legacy back catalog DLC will be supported, provided they've already been purchased on Xbox 360 and PlayStation 3. Most of my hands-on time was spent getting to reminisce with some old favorite tracks, like Boston's "More Than A Feeling," Pat Benatar's "Heartbreaker," and Pearl Jam's "Evenflow." Of course, the game itself will also feature a handful of new tracks. 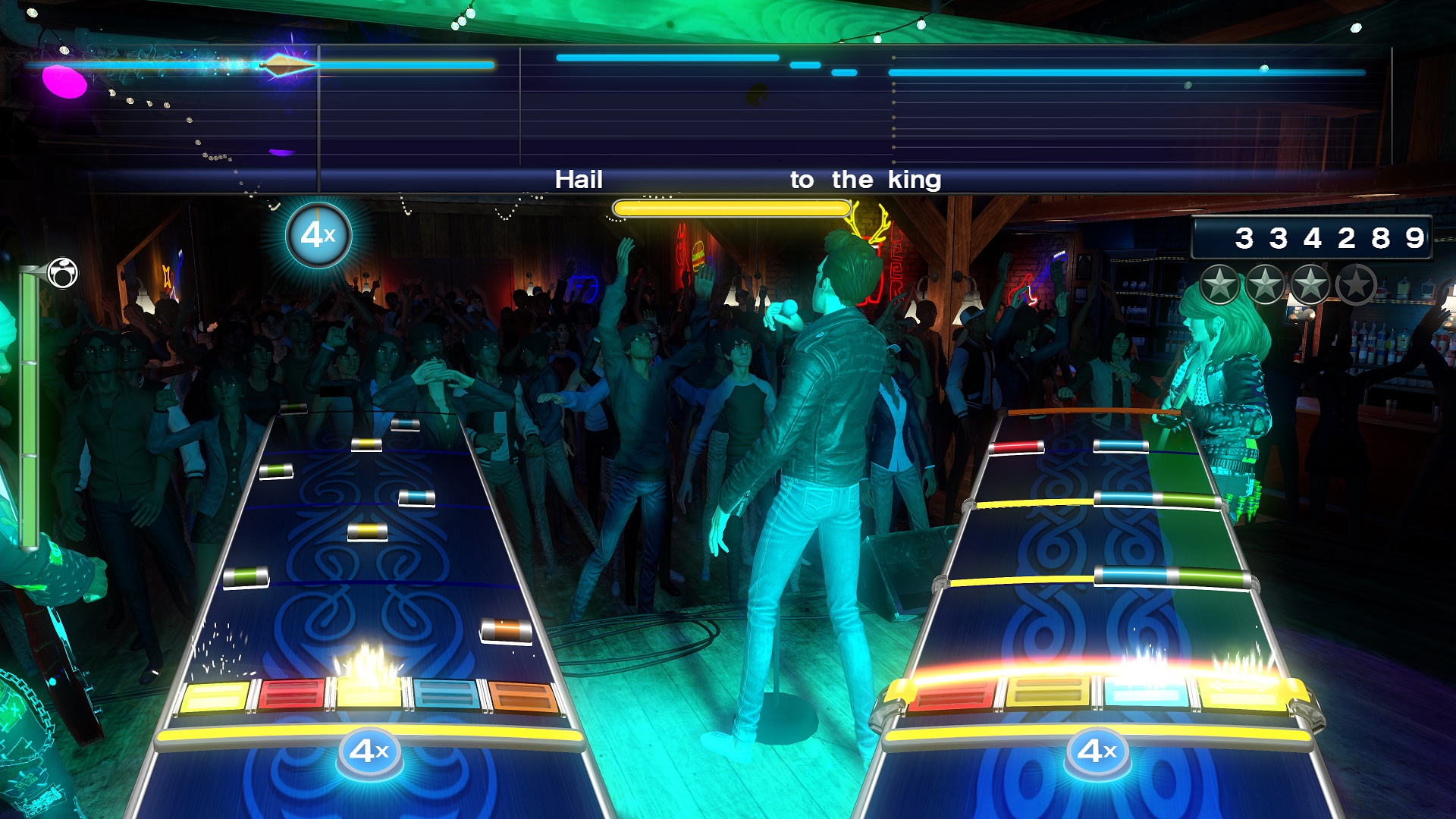 The six newly-revealed tracks include:

The basic fundamentals of a Rock Band game are all present. Play notes to the tune of the music to rack up a high score and rev up the crowd. Guitar, Bass, Drums, and Vocals all return, with wireless legacy instrument support. PS3 wireless instruments can jump to PS4, just as Xbox 360 instruments can jump to Xbox One. Co-publisher Mad Catz will also be putting together whole new instruments to go along the game.

There are a couple of new minor tweaks to the overall Rock Band experience that should make playing with friends a little more of a streamlined experience. Bands can now play in "Shows," which allows the virtual audience to shout requests, demand encores, and also react to bands' song choices. A voting system will come up in-between each song, allowing bands to democratically pick which song to play next out of a number of categories. Maybe three bandmates will vote for "An 80s song" or "A long drum solo" or the like. The most interesting aspect of this feature is that it removes the precious minutes spent running through the setlist menu and keeps the music going at a decent pace.

Singers and drummers will also have some new concepts to play with. Freestyle vocals allow for some more self-expression, with Hard and Expert players able to improvise and add flourishes to a song, just as long as they're still in key. Dynamic drum fills, meanwhile, adds a new drumfill system to trigger Overdrive, allowing drummers to keep the beat as they go. Change can be rough for some, however, which is why there will be an option in place to use the legacy Rock Band 3 drum fills, as well as the "Static" drum fills used in The Beatles: Rock Band. 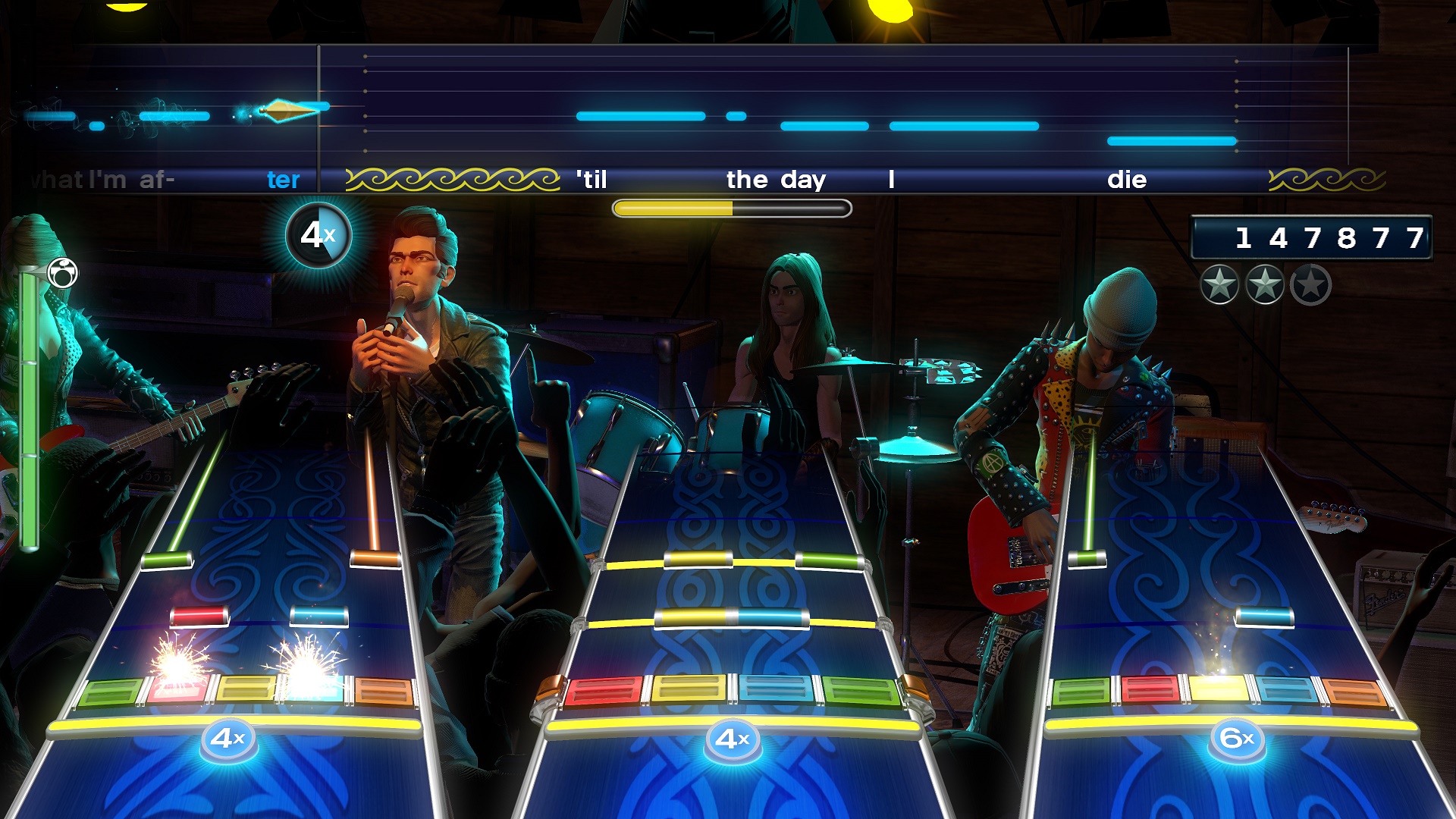 If there was one feeling I couldn't shake off throughout my time with Rock Band 4, it's that Harmonix understands exactly what their game is now. They're not bogged down by delusions of trying to teach people how to play real instruments. Rock Band 4 embraces what the series has always been to many people -- a game to pop in and enjoy with friends. With the Shows mode, that atmosphere feels more prevalent than before. There are still a couple of unanswered questions, such as whether the Rock Band 3 keyboard peripheral will get legacy support and the fate of wired Xbox 360 instruments. But the most crucial question of "Is this still the Rock Band people know and love?" looks to be an emphatic yes.

Rock Band 4 is set to release on Xbox One and PlayStation 4 later this year.