Hearthstone: Heroes of Warcraft's Blackrock Mountain adventure continues, and this week has you heading straight for Lord Nefarius himself. You can collect all of the new cards by finishing the Normal and Class challenges, but to really secure your bragging rights, you need to finish each boss on Heroic. The Heroic bosses get ratcheted up with outrageous difficulty spikes and unbalanced hero powers.

Fortunately for you, we've rigorously tested our decks and found how to take them all down. With a heavy dose of strategy and a little luck, you can earn the Heroic card back for beating every Heroic boss in Blackrock Mountain.

This wing pits you against Razorgore the Untamed, Vaelastrasz the Corrupt, Chromaggus, and Lord Victor Nefarius. As always, these strategies are formulated for their Heroic incarnations, but you should be able to handle the Normal bosses with the same strategies. 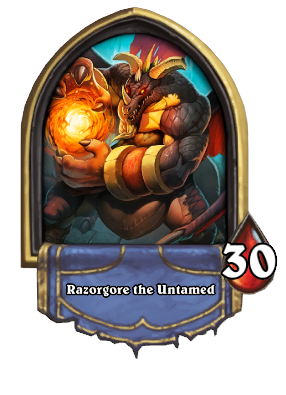 For a Heroic boss, Razorgore is actually fairly simple. His hero power makes for constant threats, since each Corrupted Egg will hatch into a huge 7/7 minion once it reaches 5 Health. He starts with one on the board already at three health, so you need to get your own minions out quickly to deal with them. Fortunately, the eggs themselves are weak, and even doing a single point of damage to them will stall their hatching for another turn.

Your best bet is Warlock, running a fairly standard Zoo-style deck. Razorgore doesn't actually have many threats of his own, so as long as you keep his eggs from hatching the match as a whole is smooth sailing. Flame Imp is a good early-drop that can do heavy damage to an egg, and then you can keep rolling out more cheap minions until you have control of the board. Hellfire is perfect if somehow things get out of hand, and Imp-losion provides an easy way to deal with one egg while spawning some Imps for the next turn.

Once you've handled his eggs, it's just a matter of continuing to knock out the new ones as they spawn and using the rest of your minions to hit his face. 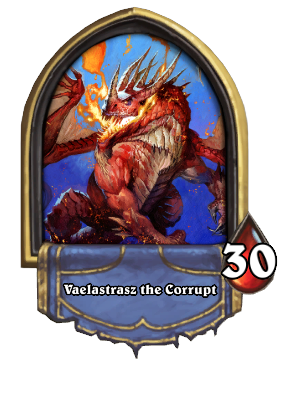 Vaelastrasz is essentially playing what Hearthstone veterans call a "Mill Deck," which has two goals: overload your hand so that you burn cards due to overdraw, and speed you towards running out of cards so that you suffer from Fatigue damage. His Hero Power feeds into this, but he also tends to equip spells like Naturalize to speed the process along by forcing you to draw cards. On Normal his power is symmetrical, but on Heroic he's also constantly gaining Mana on you, giving him access to bigger minions much quicker than you. He also uses cards like Clockwork Giant to take advantage of the cards he forced you to draw.

To defeat him, we recommend the natural enemy of the Mill deck: the so-called "Face Hunter." Since you can't count on minions sticking around, fill your hand with ones that can either do damage immediately, or that leave behind other minions when they die. This strategy also lends itself to cheap minions like Haunted Creeper, so you'll be able to unload more of your hand to avoid burning cards. As long as you keep hitting his face and doing damage with your weapons and Hero Power, you'll pull through. Chances are he will still burn some of your cards, but as long as you have plenty of burst damage it won't matter.

Near the end of the match, he'll probably start to gain the advantage and have plenty of big minions out. Don't panic. The Face Hunter strategy tends to walk the razor's edge when it comes to securing lethal, so that just means it's working as intended. Once he starts to overwhelm you, that's when it's time to break out the Unleash the Hounds and Kill Command combo to finish him off. 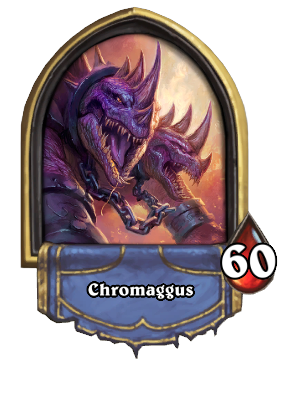 You'll be hurting quite a bit, so your best bet is the Priest. Not only can his Hero Power and cards like Light of the Naaru provide some much-needed healing, the Priest also has invaluable cheap ways to deal with Chromaggus' minions, like Shadow Word: Pain and Silence. Your minions are a little on the weaker side as Priest, but they can be buffed with Inner Fire. Lightwell is a particularly good choice for this, since you can raise its health stats a bit and then make it a damage-dealing, self-healing powerhouse. If you can survive to the mid-game and establish board control, it will be much easier to deal with his Brood Affliction cards and swing momentum in your favor.

Note that he always initially plays his Brood Afflictions in the same order, after which they're randomized. The order is Green, Red, Blue, Bronze, then Black. The effects, and how much you should prioritize getting rid of them, are as follows: 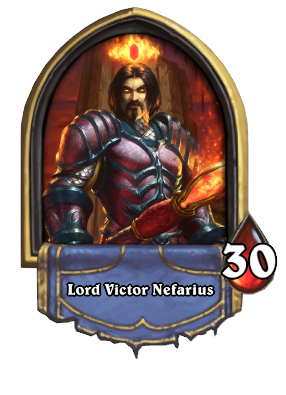 Victor Nefarius is the mastermind of the entire story, so it only makes sense that he's one difficult boss. His very first turn, he'll reveal his true form as the dragon Nefarian, and begin using his hero power to use your own class' spell powers against you. To make matters worse, Nefarian starts with a full 10 Mana and plenty of Armor, giving him a huge Mana advantage almost from the very start. In Normal Mode, Ragnaros the Firelord comes to exact his revenge, by helping you take down Nefarian. In Heroic, however, you only get one randomized minion from Ragnaros, and the rest is up to you.

So how does one overcome this massive threat? We recommend the Paladin, for two reasons. First, with its combination of buffs and board clearing mechanics, the Paladin is ideal for board control. You'll be at a serious disadvantage due to the mana disparity, so this fight requires that you control the board until you reach 10 mana so that you're on even footing.

The second reason, inversely, is that the Paladin's spells won't be as helpful to Nefarian as some other classes. Since they're so centered on board control, and Nefarian doesn't have as much need for it, it's the best set of spells to benefit you without doing all that much good for him. He may give you a headache with an occasional Humility or Blessing of Kings, but in general randomized Paladin spells are less dangerous than those of classes like Druid or Mage.

Mulligan aggressively for Wild Pyromancer and Equality. As long as you have those two cards when you hit turn four, you can turn the tide of battle with a massive board wipe, ideally after he's played many of his minions. From there it's just a matter of dealing with threats as they come, using your own decent-sized minions or debuffing effects like the Battlecry from Aldor Peacekeeper. Once you reach 10 Mana, you'll be on even ground, and his advantage will be long gone. Consider packing a few healing spells, or healing effect minions like Guardian of Kings or Antique Healbot, just in case he chips away at you.

Finally, keep in mind that he has access to all of your class spells, not just the ones you have in your deck. For that reason, tread lightly. If he has a secret and two minions, plan around the buff provided by Avenge. If he only has a minion on the board, make sure that buffing it with a Blessing of Might or Blessing of Kings wouldn't put you into lethal range. If you're close to dead and he has a secret on the board, hit him with your weakest minion just in case it's Eye for an Eye. Familiarize with the spells of your chosen class so you won't be surprised.