Godzilla preview: Return of the King

The King of the Monsters is preparing to unleash a rampage on the next generation of consoles. Bandai Namco and Toho are looking to bring Godzilla to a new wave of players with a new game, simply titled Godzilla. Of course, the mighty beast isn't alone and Shacknews got to check out what's in store for PlayStation owners during a media event held late last week.

"Basically, there was a PS3 game in Japan last year in December," explained producer Shunsuke Fujita via a translator. "So we're using the same development company and totally rebuilding the game for PS4, mainly for foreign audiences. We're also going to release in Japan, but that's kind of an afterthought. The game is really for foreign audiences and for PS4. The theme of the game is extremely simple: Destroy! You, destroy! You are the monster! You destroy!" 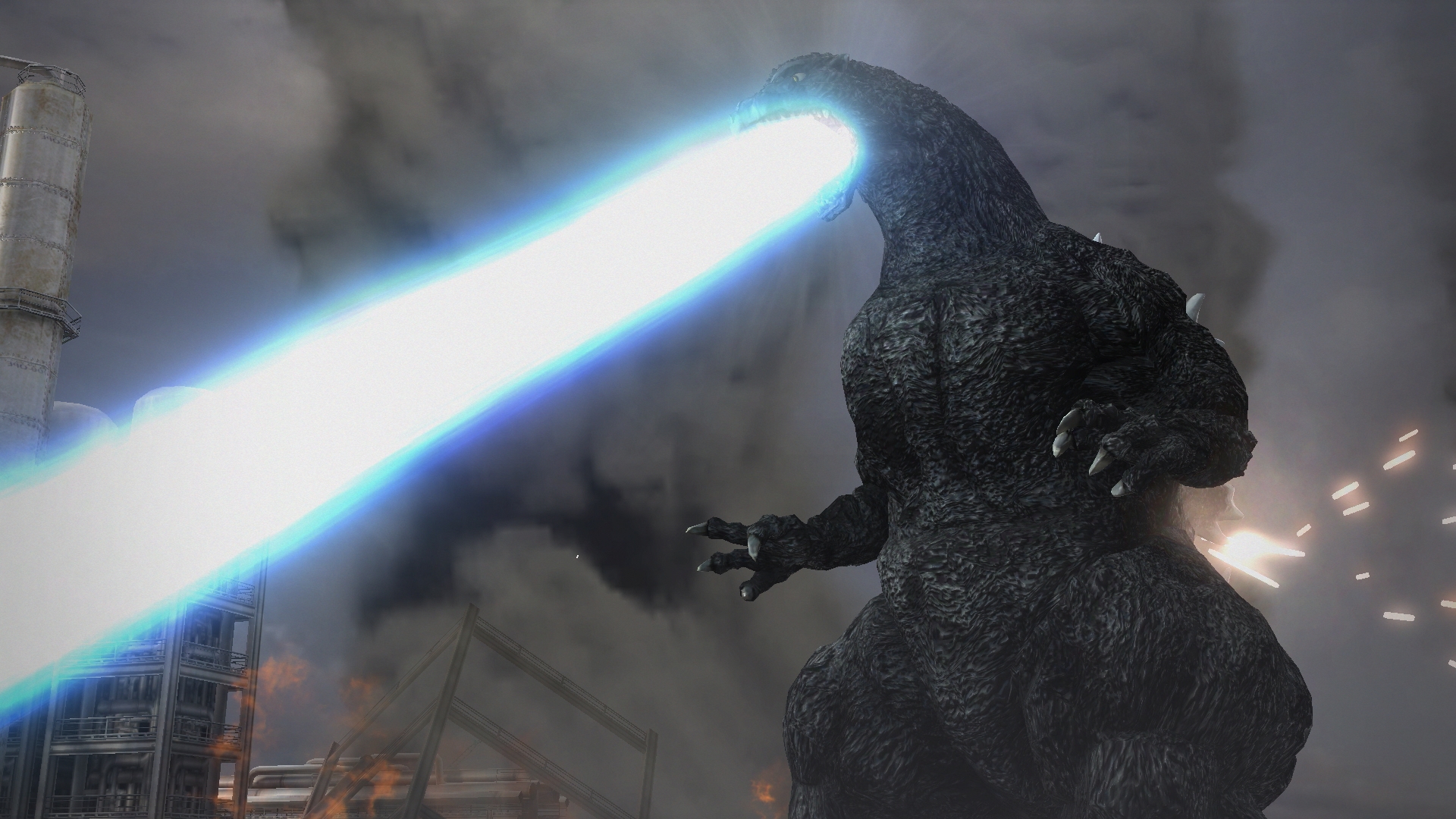 Hard to argue with a premise like that in a Godzilla game and, sure enough, Bandai Namco seems to have that idea down pat. The Godzilla game is a 3D action game that's purposely designed to evoke the atmosphere of the classic Japanese films of yesteryear. That includes stages that appear like they're pulled right out of the old-school movie sets and a classic roster of playable monsters. The roster includes Godzilla, Destroyah, King Ghidorah, Mechagodzilla, Jet Jaguar, Biollante, Mothra, Gigan, and Hedorah the Smog Monster. Other monsters, like Space Godzilla, will be added to the PlayStation 4 roster as exclusives. That will leave plenty of options for the game's multiplayer, which will allow players to take their monster battles online.

My hands-on with Godzilla saw me take control of the King of the Monsters, starting off at a mere 50 meters tall. Just as in the movies, destruction is key and wanton carnage will cause Godzilla to grow bigger. Godzilla's carnage was soon interrupted by King Ghidorah, who came down to pick a fight. Godzilla could attack by swinging his limbs, whipping his tail, charging forward, and using his atomic breath. All of the attacks were easily tied to an assigned button, with the only odd function being the shoulder buttons used to turn the big monster. There were also special moves that could be used to momentarily stun King Ghidorah. 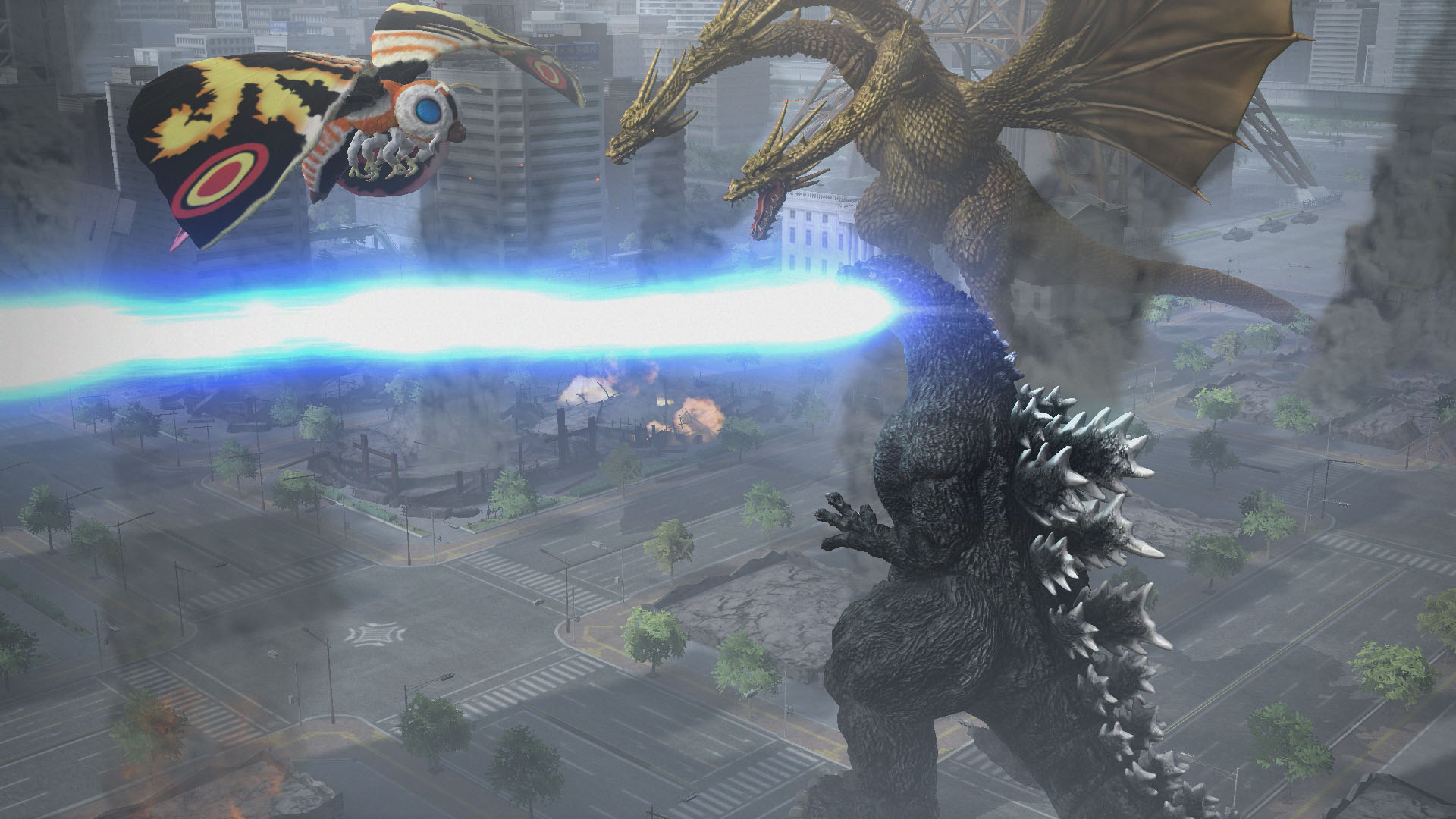 The one-on-one was soon interrupted by Space Godzilla. Yes, the PS4 version of the game will feature three-monster clashes, an element of the movie that Bandai Namco is seeking to capture in full. The game's difficulty is meant to be intense to the point that overcoming two-on-one scenarios is highly unlikely. However, the publisher also notes that monsters in the films acted on their own agency, so it's entirely possible to turn the two AI opponents against one another and wait for them to wear each other out. Likewise, players can also try and team up with one of the other monsters to gang up on the odd monster out.

The idea in the campaign is to progress across a number of recognizable locales that includes downtown Tokyo, Mount Fuji, and the Factory District from "Godzilla vs. Mechagodzilla." Players can pick up unlockables along the way, which mainly consist of custom camera angles. These camera angles will allow players to witness Godzilla's path of destruction from the perspective of one of the hapless humans on the ground or from one of the location's buildings. As the monsters rampage across the various locations, the human response will gradually escalate. They'll send out military, tanks, planes, and eventually will even put together Mechagodzilla.

A PlayStation 3 version of Godzilla is also set to release, albeit in a more stripped-down form. The PS3 version will not feature the three-monster battles, online capabilities, and a more limited monster roster. It will also be released solely as a digital download, as opposed to PS4, which will have a full retail version available.